"A rose by any other name would smell as sweet..."

Did you know that olfaction, or the sense of smell, is controlled by the same part of the brain that controls memories and emotions? According to the Sense of Smell Institute (yes, there is such a thing), “People recall smells with a 65% accuracy after a year, while the visual recall of photos sinks to about 50% after only three months.” This is why a whiff of someone’s perfume might bring back a memory of your grandmother or an antiseptic smell might immediately evoke an unpleasant memory of a trip to the emergency room.

I know that the few times in recent years that I’ve had to don a hospital gown, the soft, powdery scent of the gown always brought back the pleasant memories of my children’s births. On the other hand, for years I could not stand the smell of Johnson and Johnson’s baby lotion—the kind that used to come in a pink bottle. I used it years ago as an all-purpose moisturizer when I was pregnant with my first son. Despite its clean, fresh fragrance, it always reminded me of having morning sickness.


One of my teaching assignments for many years was a creative writing class for juniors and seniors. During the unit on descriptive writing, we discussed the importance of using all the senses. One assignment I gave was to write a description of a scene or place whose smells evoked memories. I gave them some possible prompts, such as going to the dentist, a trip to the emergency room, Thanksgiving dinner, or a day at the county fair. Writing descriptively about smells is not easy, so we brainstormed before writing, coming up with a list of possible adjectives. I started them off with words like spicy, aromatic, and pungent, and then they added to the list. By the end, of course, it often degenerated into words like raunchy, putrid, or foul, but it gave them something to work with.

As with any creative writing assignment, the resulting pieces were often nothing out of the ordinary, but I would always be pleasantly surprised by a few students whose papers were so descriptive you could almost smell the images on the page. But all of them quickly related to this assignment; they began remembering certain scents that brought specific images or events to mind.

What started me thinking about the importance of our sense of smell was a post on Sunday by Amy at High and Dry. She showed a photo of a new honeysuckle vine that she had, and I thought how much I loved honeysuckle. Strangely, the memory that the scent of honeysuckle triggers for me has nothing to do with the flower itself. When I was a young teenager I used to wear a perfumed lotion from Avon that had a honeysuckle scent. Even today that smell brings back memories of a time when I was younger, dreaming of boyfriends and wondering what the future would hold for me. I am going to add a honeysuckle vine to my ever-growing plant wish list!

Many of the rest of you have mentioned in describing a flower what a lovely fragrance it had. I couldn’t think of any flower I have that has a fragrance I am drawn to, so I decided it was time to stick my nose into things, so to speak. 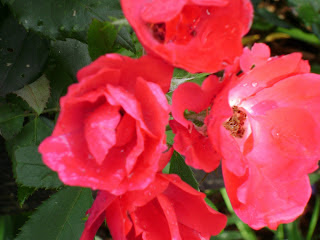 I have two Knockout roses, currently under
daily attack by the Japanese beetles.
They smell like, well . . .roses,
but nothing like the fragrance of tea roses.

One plant I didn't have to stick my nose into to take in its aroma is the Russian sage, which does smell somewhat like its namesake. 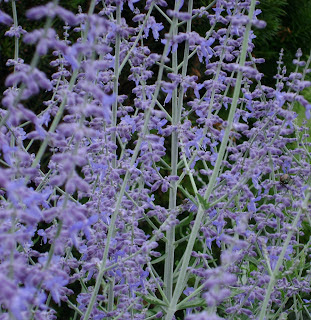 Its strong, almost sickenly sweet scent
usually clings to my hands and clothes after
I've been weeding around it. I've been
trimming a few branches from one
plant that has fallen over and covered up
one of the roses. As I was doing this, I
noticed the rose beneath it had no damage
from the Japanese beetles. I thought I'd
hit on a possible deterrent to the beetles--the strong aroma put off by the sage. But if you
look closely in the lower right of this photo,
you'll see my theory doesn't hold up.
Apparently, the beetles don't mind its
aroma.

I had to "bee" very careful when checking out some of the other flowers. The salvia "May Night" also gives off a sage aroma, but it's not as sweet as the perovskia, nor as noticeable until you get right down to the plant. 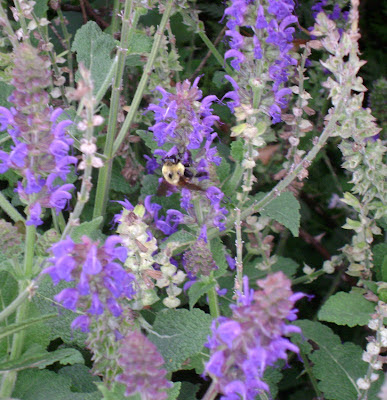 Upon the advice of Marnie at Lilacs and Roses, I checked a nearby pot for the the heliotrope which I included in my last post. She mentioned the wonderful vanilla scent of this flower. I did get a faint whiff, but the plant I have doesn't put out much fragrance.


Last week I noticed these tiny little blooms for the first time on a creeping thyme, Thymus serpyllum. This is a plant that's billed as a good groundcover; in fact, I've seen it marketed more this year as a "steppable." But I've pretty much ignored it until I saw these blooms. Since it's in the thyme family, I assumed it would have a scent and bent very low to get a whiff. It does have a faint fragrance, but it's such a small plant and we'd had rain the night before that I wasn't sure if I was smelling thyme or damp grass. 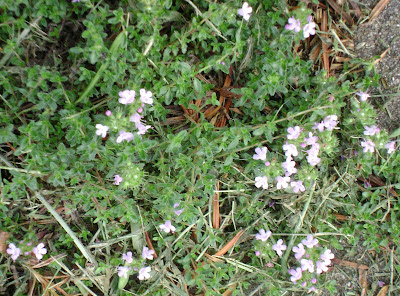 By now I was beginning to wonder if I was losing my sense of smell or sinus congestion was kicking in again. But there was no doubt why the nepeta "Walker's Low" is called catmint. It didn't take much sniffing to get that minty aroma. 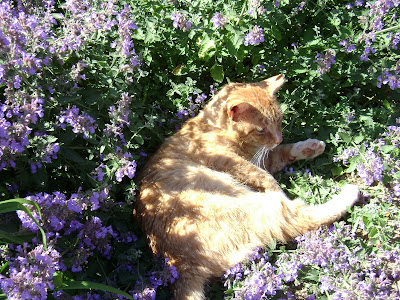 Obviously, there are many flowers that are grown for reasons other than their fragrance. When I bought this cleome I was cautioned not to plant it too close to the house because it had an unpleasant odor. For the sake of my research, I sacrificed my nose and took a good strong whiff. It doesn't smell good, that's for sure, but it's not disgusting either. I've planted it far away from the house, but I don't think I'd notice it even if it were closer. Well, that's it. Despite risking bee stings by sticking my nose into nearly every plant I have, I didn't find any other really fragrant flowers. I think I'm missing out on an important sensory effect in the garden and need to plant more flowers for their scent. I would love to walk out my door and smell gardenias or jasmine, but I don't think that is possible in my zone 5 garden, other than maybe in a potted plant. I'm open to any suggestions for plantings--care to share your thoughts on creating a sweet-smelling garden?
Posted by Rose at 12:30 AM