It has been a long time since I have participated in Gail's Wildflower Wednesday.  It's been a busy summer with little time for blogging, but it also seems that most of the native plants I have don't start blooming until late summer.  I've learned so much about native plants over the years from Gail and the WW posts and added more of them to my garden as I've learned about their benefits to pollinators.  So I'm very happy to join in once again with some of the late bloomers from my garden. 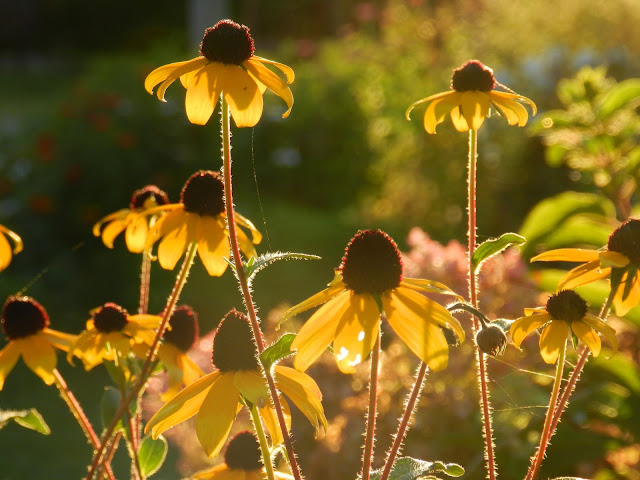 If you've read my last few posts, you know that the current star of my garden is Rudbeckia triloba, also known as Brown-eyed Susan.  In fact, it's pretty hard to miss as it's taken over the front of the Lily Bed as well as parts of the Butterfly Garden.  A volunteer that mysteriously appeared in my garden a few years ago, it has made itself quite at home here.  But you can never have too many Susans, right? 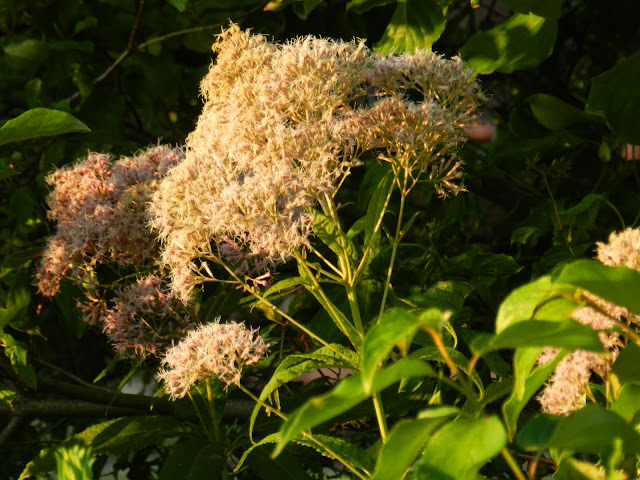 Joe-Pye weed is still hanging on at the back of the butterfly garden.  As I've mentioned before, this is definitely the native species of Eutrochium purpureum because the stems are green, not purplish, and the flowerheads not as showy a pink as many of the other types. 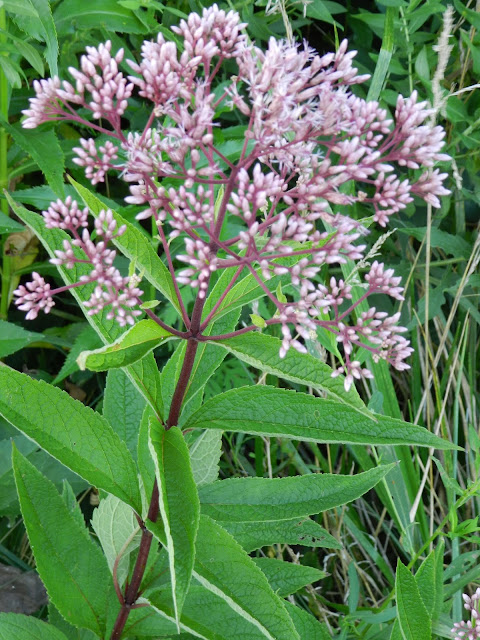 'Little Joe,' however, has much prettier flowers and the dark purple stems that I love.  I'd like to plant more of the taller Joes with this coloring at the back of the butterfly garden, but first I have to contend with the semi-thugs that have taken up residence there . . . 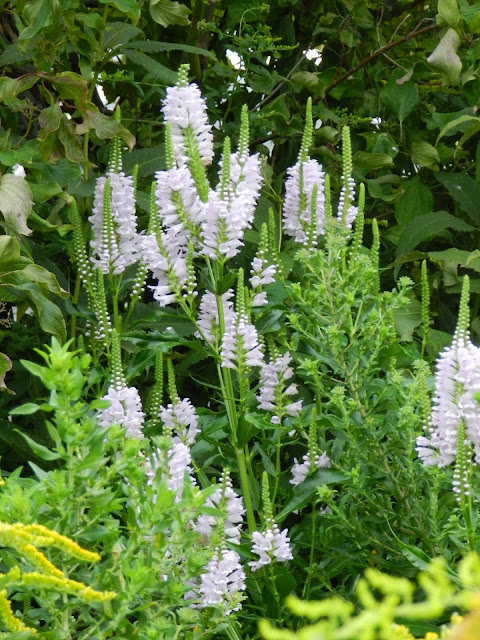 . . . the Obedient Plants.  I have a love-hate relationship with this plant:  I hate its aggressiveness and pull out numerous seedlings in the spring, but in the fall I love these white, pink, and purple blooms. 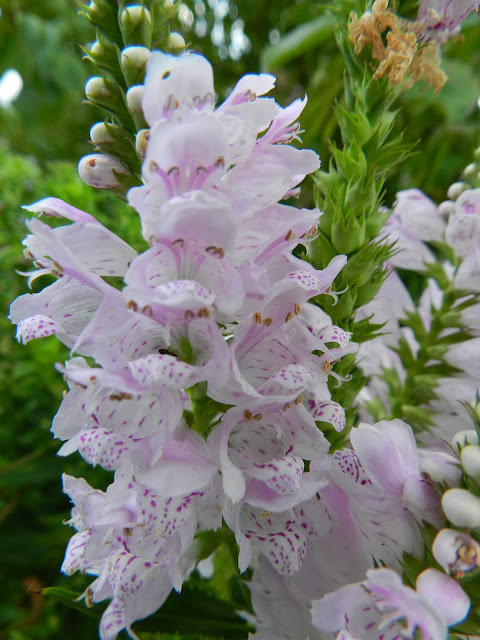 I noticed today that the pinkish blossoms actually have freckles and remind me of foxglove blooms.  Since I have never had much luck with foxgloves in my garden, perhaps I should change my attitude and think of these as the poor-man's foxglove.  The bees like them, no matter their name. 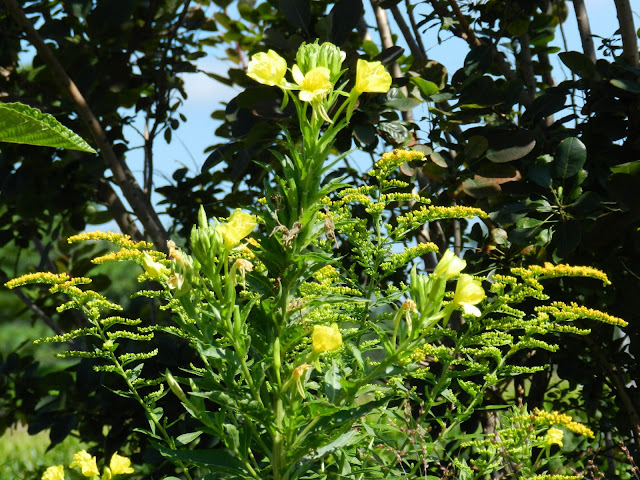 Although I have planted more natives over the past few years, the most prominent and prolific ones seem to be the ones I didn't plant.  Common Evening Primrose Oenothera biennis is one of those mystery plants that suddenly appear in my garden and I allow to let grow because I'm not sure if it's a weed or something I actually planted and forgot about. 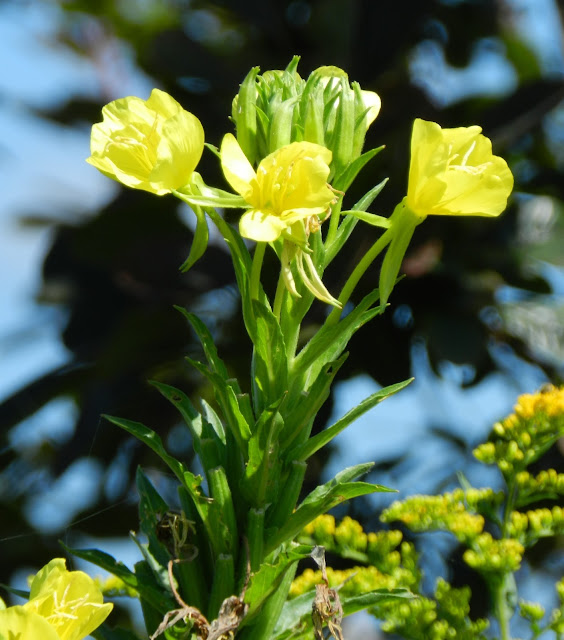 At 6-7 feet tall, it's hard to ignore.  The flowers remain open from evening till morning, but might also stay open on a cloudy day. 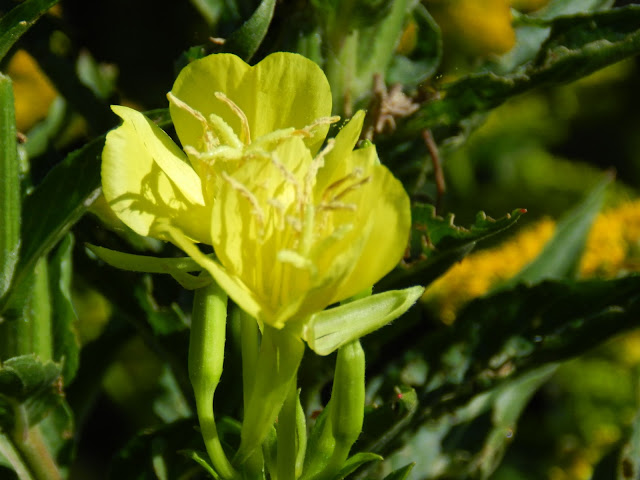 Despite its classification as a "Prairie Wildflower" by the Illinois Wildflowers website, I'd classify it as a weedy wildflower.  It has a long taproot, which explains why my efforts to eradicate it have been unsuccessful.  Still, these pretty little yellow flowers are rather attractive, and they do attract moths and the occasional hummingbird and bees, so I guess they're not all bad. 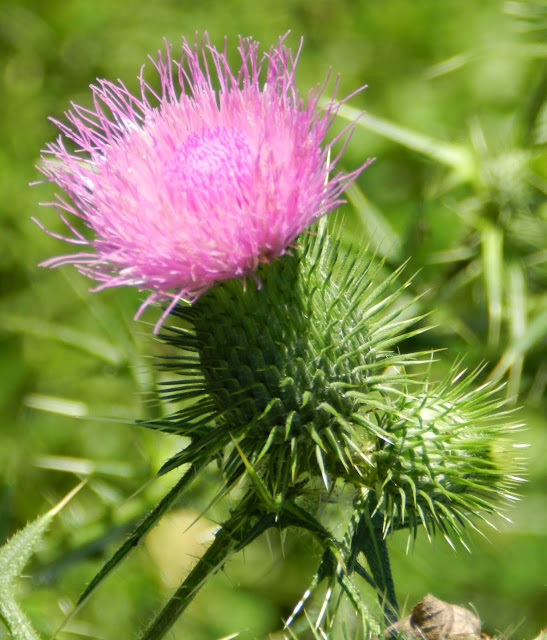 Bees also like thistle as do various birds, including the goldfinches.  However, there are more than enough plants here for the bees and plenty of coneflowers for the finches, so this lone thistle--definitely a weed in my opinion--is going to have to go. 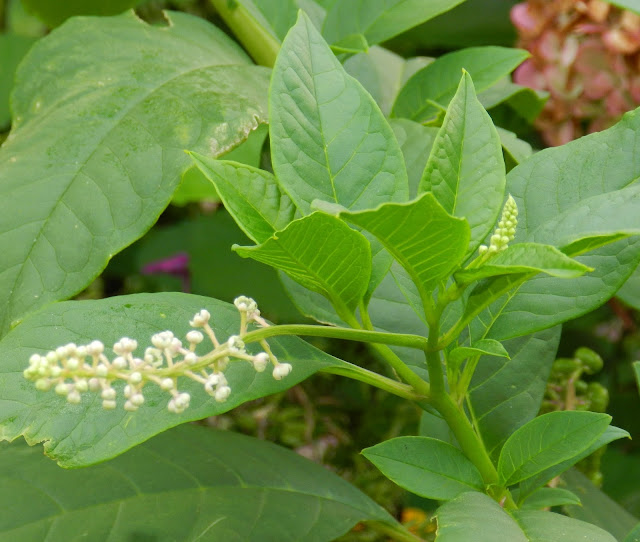 Another volunteer that appears every year is the Pokeweed.  It's another one of those with a long taproot, which is why my simply cutting it off after it blooms never quite gets rid of it. 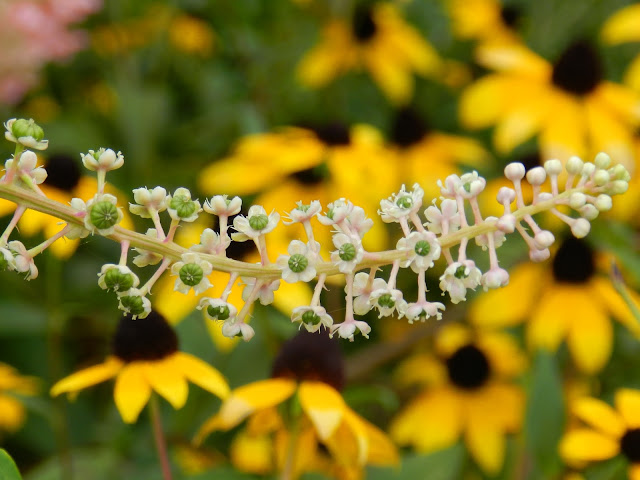 Because it has been well-mannered so far, I usually leave it alone for awhile so the birds can enjoy the berries.  The berries, as you can see, aren't ripe yet, but when they are, they'll be a deep dark purple.  They are toxic to humans, though, and can stain your hands, so I will definitely let the birds pick them! 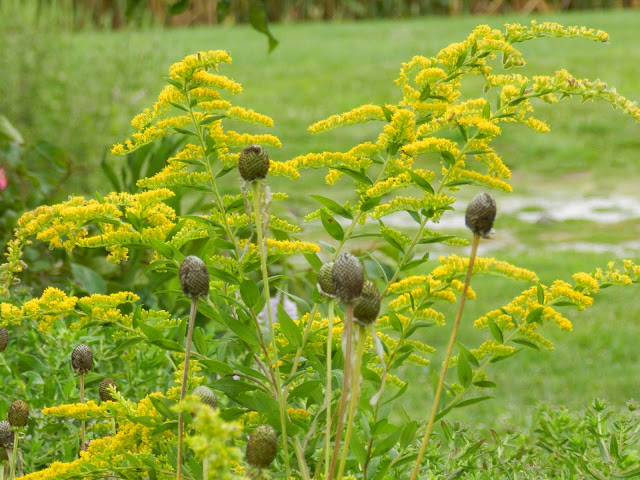 Goldenrod is also just beginning to bloom. I'm not sure what type this is, because all the plants are volunteers.  And talk about volunteers--it would take over my garden if I let it!   I pull some of the excess seedlings every year, but I leave the rest because, besides its value to insects, it really does make a pretty backdrop for other flowers, like these seedheads of the gray-headed coneflowers.  It also makes a nice filler for flower arrangements.

As you can see, many of the natives in my garden are actually volunteers, probably gifts from the birds.  Too often it seems the natives I actually plant in my garden don't germinate or disappear, probably overcome by the thugs already there.  But sometimes I am pleasantly surprised, as I was by the plant I wanted to focus on this month. 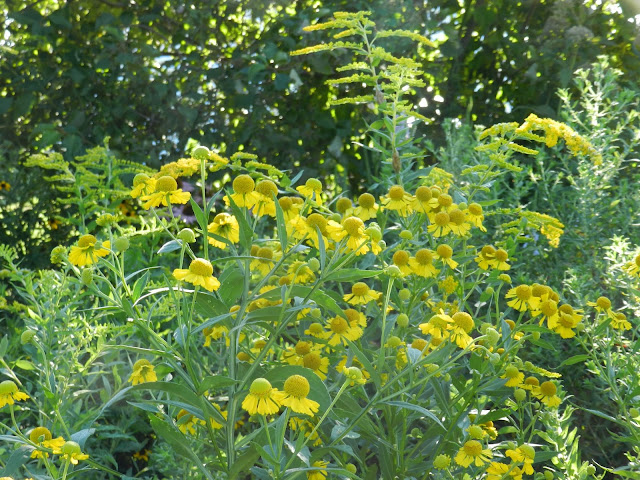 A few weeks ago I noticed a few tall plants amidst the emerging goldenrod and asters.  I was pretty sure they were weeds until I noticed small flowerbuds on them.  I was intrigued and decided to leave them alone.  Thank goodness I did!  When they bloomed, I was finally able to identify them as Common Sneezeweed, Helenium Autumnale. 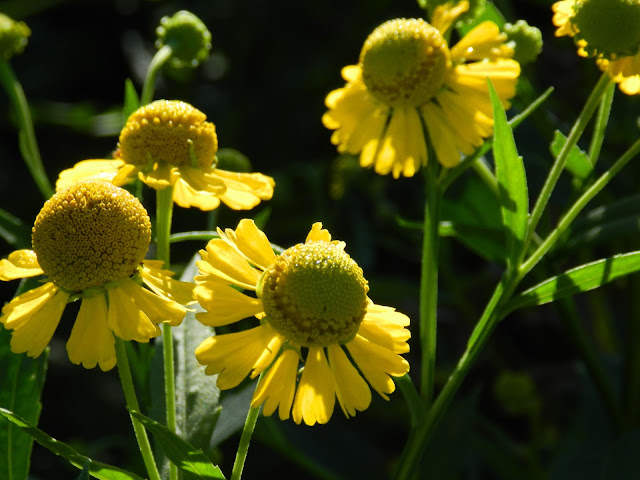 A few facts about this Sneezeweed: 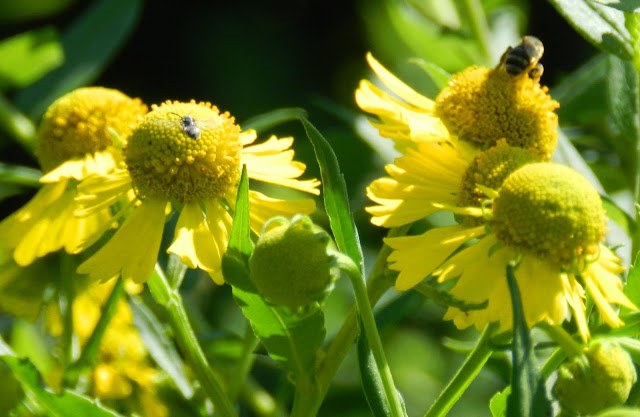 Common visitors to the Sneezeweed include all kinds of bees, some wasps, Syrphid flies, butterflies, and beetles.  Most suck the nectar, but some also collect the pollen. 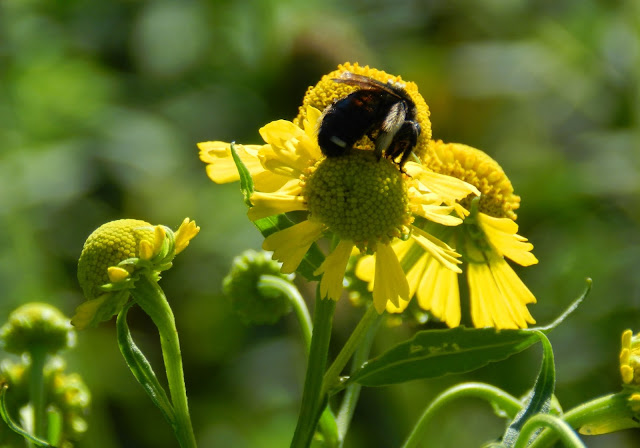 So how did these pretty bee-magnets find their way into my garden?? I doubted they were volunteers, so I searched through my garden journals, and sure enough, I discovered that I had purchased a seedling at our local Prairie Plant Society sale two years ago.  Because I had seen no sign of it the past two years, I had forgotten all about it--thank goodness I didn't pull it out!  Sometimes there are benefits to being forgetful--it makes for some happy surprises every year in the garden:)  Aside from that, seeing the Sneezeweed in full bloom gives me hope that some of the other natives I've planted in the past two years and haven't seen a sign of may just be biding their time and will surprise me next year.

I am enjoying all these late additions to the garden, whether they were invited or not.  For more information on wildflowers and natives, be sure to visit our gracious hostess Gail at Clay and Limestone.