It's mid-August, and I've lost my garden motivation.    It's hot and humid, and frankly, I have no desire to work up a sweat,tending to all weeding and pruning I should be doing right now.  About the only thing I have any energy to do is to water the pots and new perennials, and that's only because I know they will die if I don't keep it up.  The garden marches on, though, regardless of my neglect with a few standout plants for this Bloom Day and lots of other smaller blooms to enjoy. 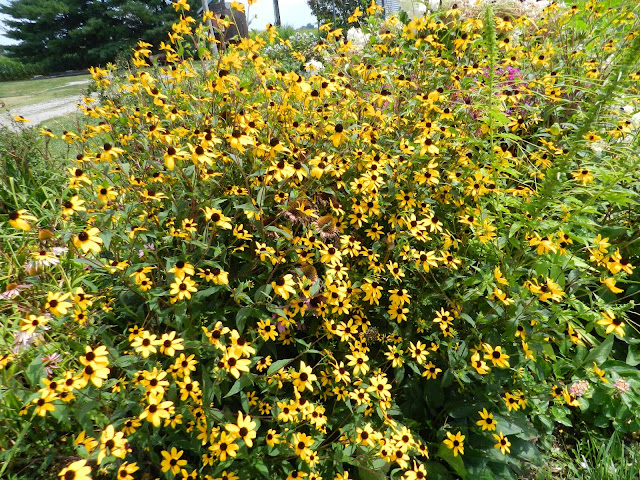 The kaleidoscope of colors provided by the daylilies for July Bloom Day are pretty well gone, and the swaths of coneflowers that bloomed a month ago are looking pretty worn and sad.   But there are a few plants that have taken their place and really stand out in the garden right now.  One is the Susans, especially the brown-eyed ones, Rudbeckia triloba, which started out as a single volunteer and have now practically taken over the lily bed. 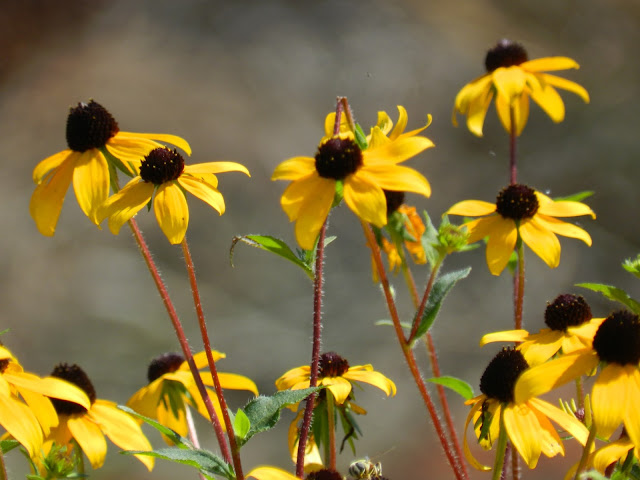 I keep telling myself I should cut these back so the few other blooming plants in the area have a chance to be seen.  But it's hard to be ruthless with such a cheerful and enthusiastic bloomer.  Besides, that sounds like work:) 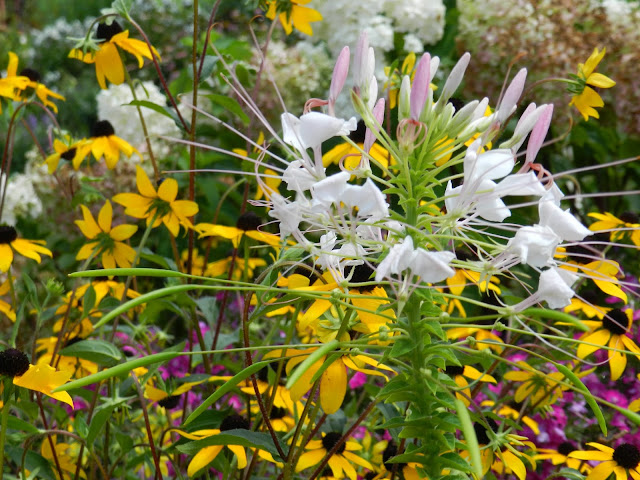 A few volunteer cleome don't seem to mind and fight their way through the maze of yellow. 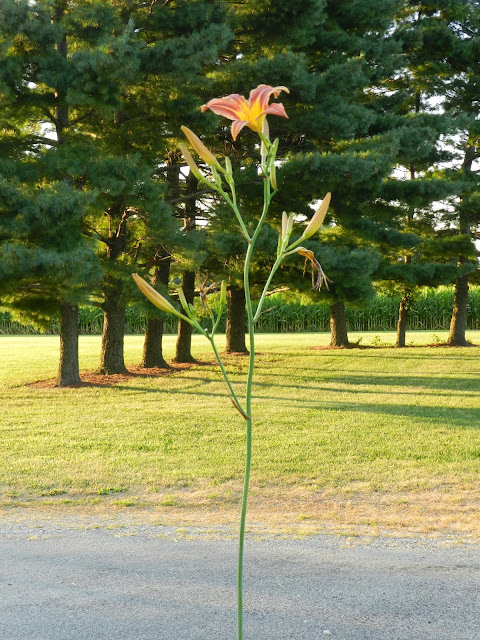 Besides the Susans, you can't miss this tall lily.  While most of the lilies are finished, there are a few late bloomers, including this 'Challenger' lily.  I received a division from a friend two years ago, but this is the first time it has ever bloomed.  I knew nothing about this lily at the time, so what a surprise when it rose up to a full six feet in height! 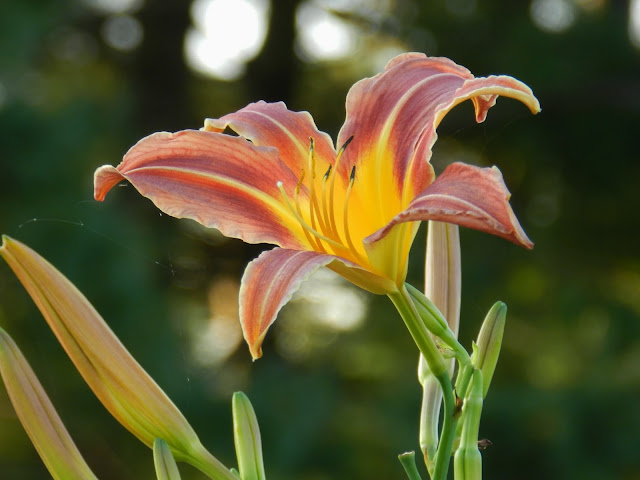 I've since done a little research on this lily and discovered it's an heirloom lily, introduced the year I was born.  Standing alone as it does, it's certainly been a conversation piece for anyone who's visited, but it does look a little lonely by itself.  I have my eye on a source for 'Autumn Minaret,' another tall, late lily to keep it company next year. 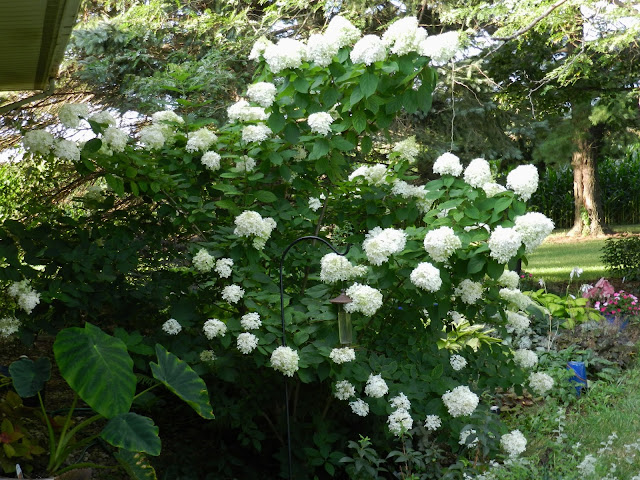 The other plant that really stands out in the garden right now is the 'Limelight' hydrangea, which can be seen the moment you drive up our lane. More pruning is needed here, too, but at least that can wait till spring when the enthusiastic gardener returns. 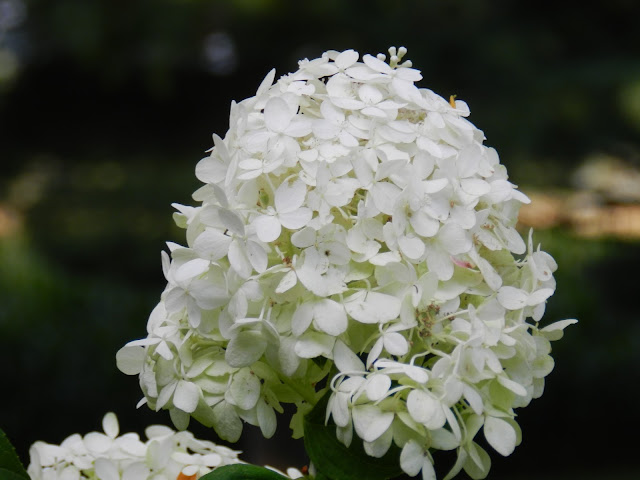 I love these huge blooms, and I've found an easy way to dry them at the end of the season to enjoy them all winter long. 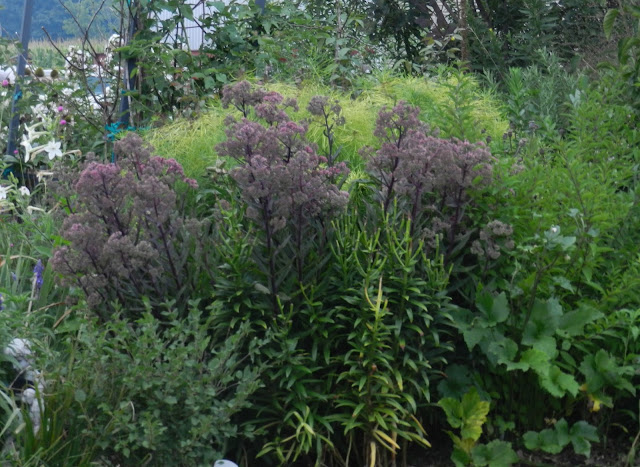 The best time to view the garden on these hot days is very early in the morning or late evening--if you've put on mosquito repellent, that is.  I'm looking forward to cooler days ahead; this corner of the Arbor Bed is already starting to look a bit like fall. 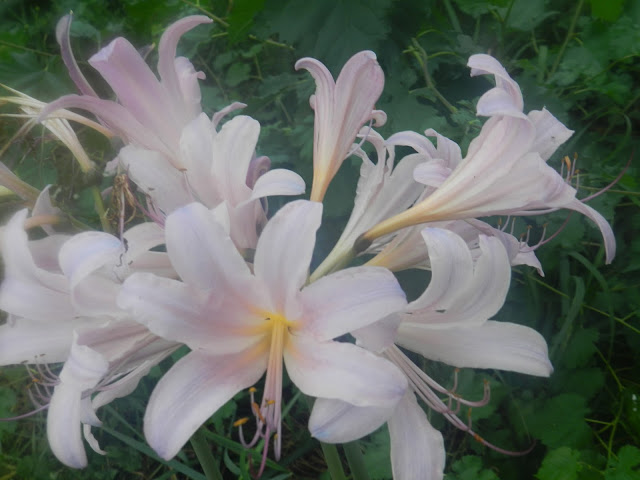 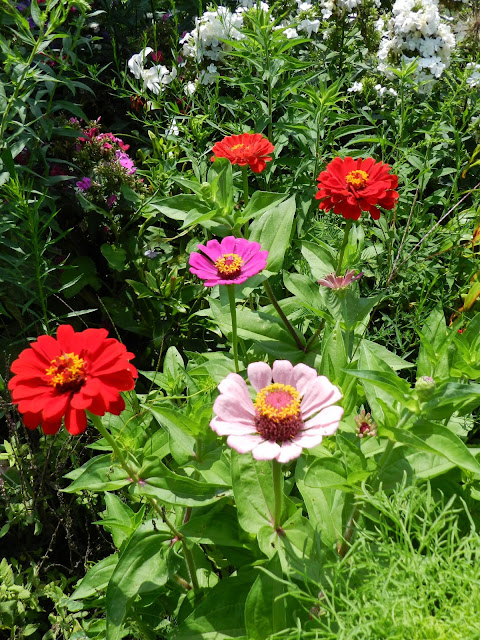 Oftentimes the smaller blooms get overlooked for my Bloom Day posts, so I wanted to focus on a few of them this month.  These zinnias aren't small, but they sure are few in number compared to most years.  I don't know what happened to all the seeds I planted, unless my garden helpers earlier in the summer accidentally smothered them with mulch.  The same thing with my cosmos--I see only one plant that might bloom yet. 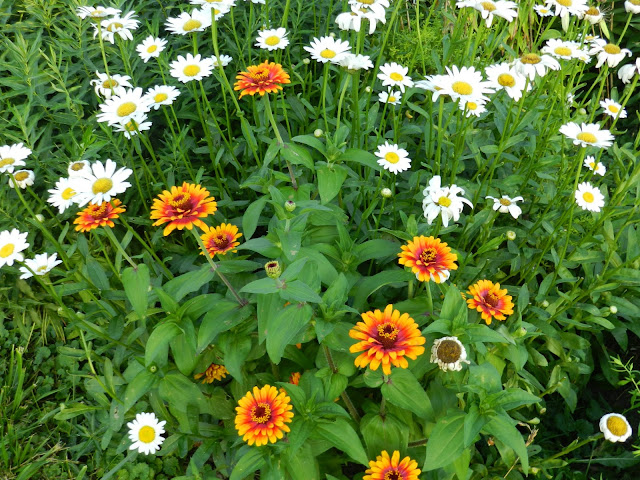 Thankfully, the 'Zowie Yellow Flame' zinnias were planted in the front, and I made sure to mark them carefully.  Mixed with 'Becky' daisies here, they usually attract lots of late summer butterflies including Monarchs. 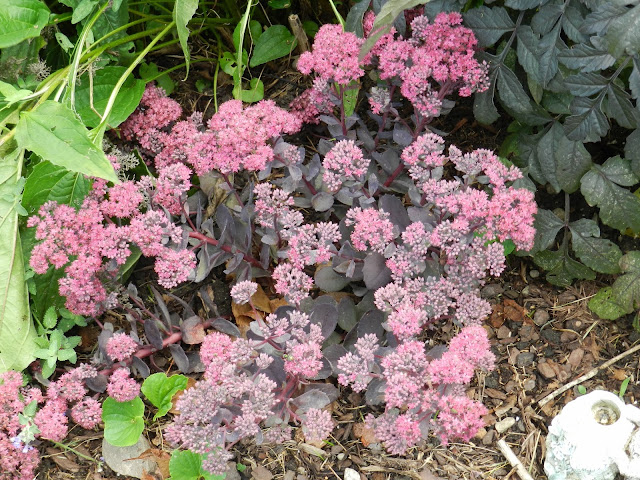 I've become really attracted to low-growing sedums and am planting more in the front of the sidewalk garden.  This is a new one, 'Dazzleberry,' which according to the local nursery owner fared better than others during the torrential rains of June. 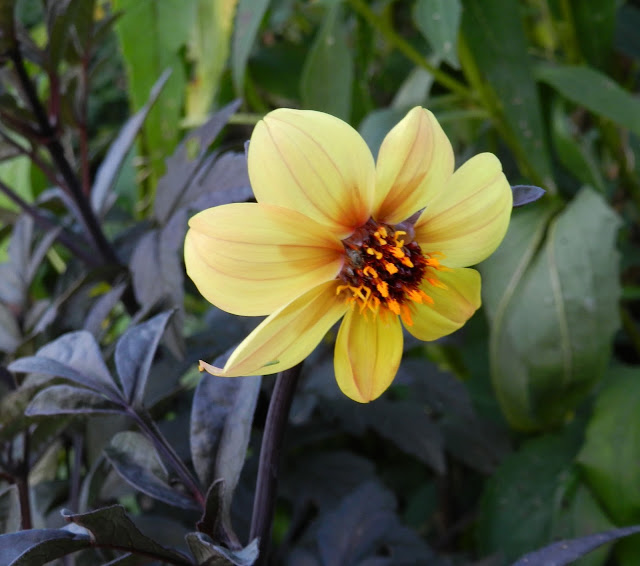 Nearby is my first successful attempt at growing dahlias, 'Mystic Illusion.' 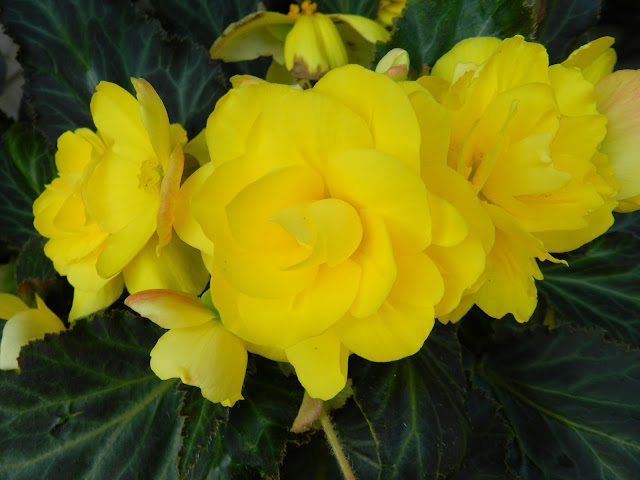 Yellow begonias brighten a spot on the front porch. 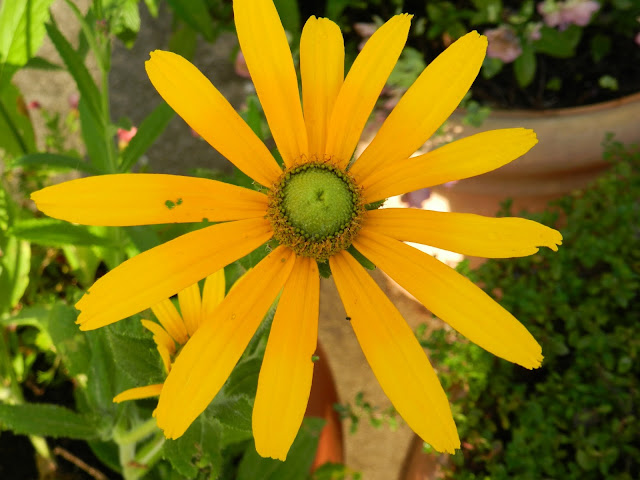 I had so much success with starting Rudbeckia hirta seedlings this year that they're planted everywhere. My favorite 'Prairie Sun' seeds were all sold out, but these 'Irish Eyes' look almost identical to me. 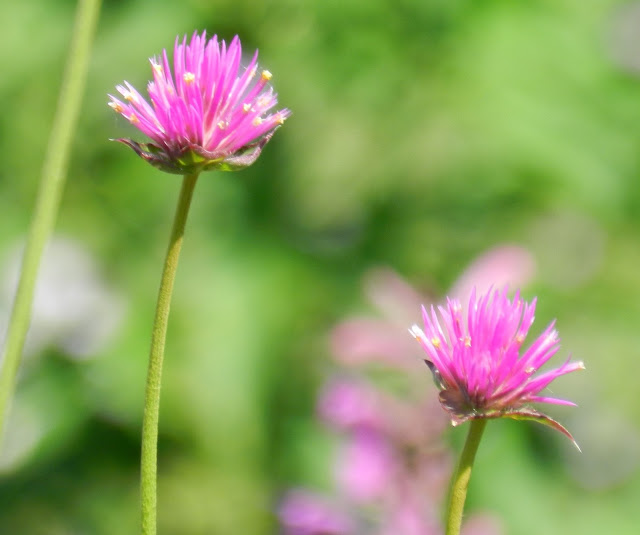 Gomphrena carries on in spite of the heat. 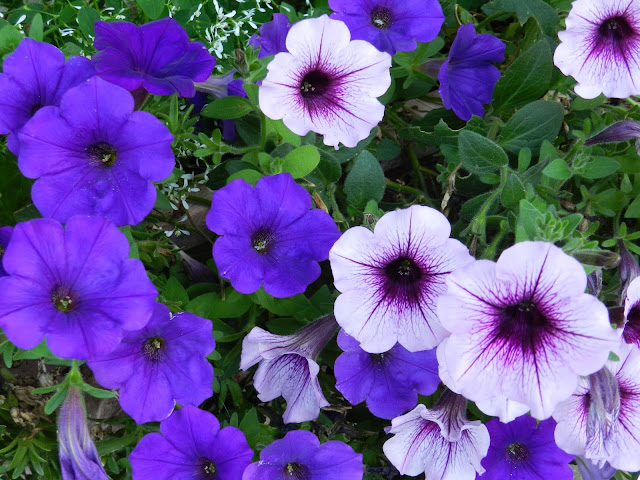 This is the time of year when some of the petunias in my planters start to look pretty sad, so it's a good time to evaluate what varieties stand up in the heat of summer.  'Royal Velvet'  and 'Bordeaux' Supertunias' are two that look as good today as they did in June. 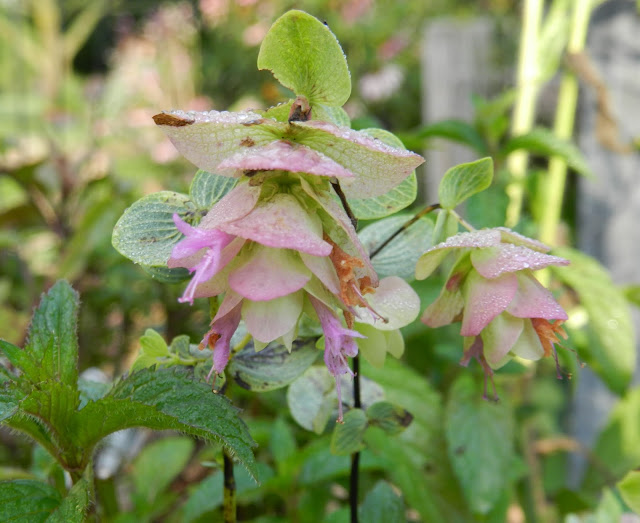 It's easy to overlook the small blooms of this 'Kent Beauty' oregano in one of my herb pots, but I love them.  I had long admired these blooms on Joy's blog, so I'm so happy I found some to plant this year. 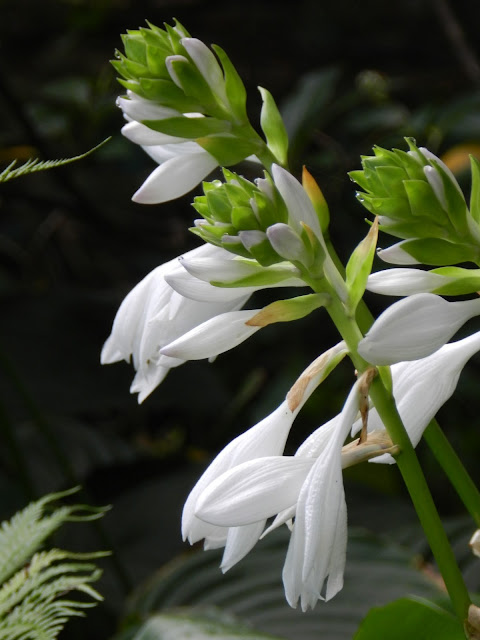 The hostas known as Plantain Lilies are pretty plain most of the year, but boy, do they make up for their ordinary green leaves when they bloom!  One or two plants in my garden have been divided and divided in recent years, so I will have a mass of these lovely white blooms for the next few weeks. 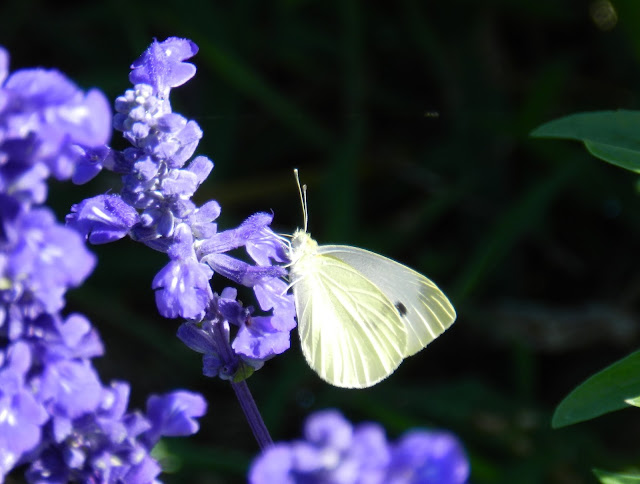 While I have been too lazy unmotivated to work in the garden much the last few weeks, I have taken the time to just sit and enjoy it, especially to enjoy all the little visitors to the garden. This cabbage white butterfly (I think) loves the 'Victoria Blue' salvia. 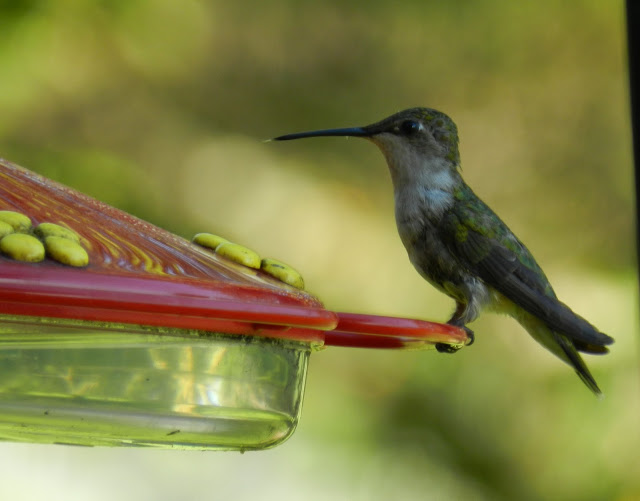 The hummingbirds are loving all the late blooms, too, though so far I've only managed to photograph them while at the feeder.  There's nothing better than watching hummingbird dances in late summer! 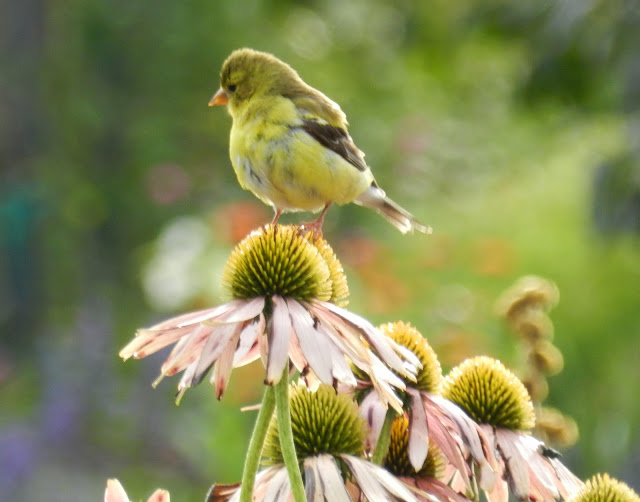 The most numerous visitors to my garden--besides the bees, of course-- are the goldfiinches.  This one looks like a juvenile, I think.  I just want to reach out and pet him:) 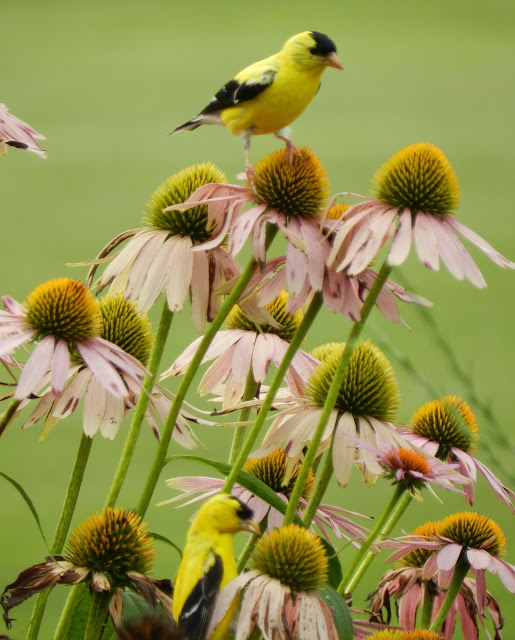 To some, the coneflowers might look tattered and ugly, but the goldfinches like them this way.  It's been a nonstop finch party at my house the last two weeks, and I'm not about to end it!  The coneflowers will stay as they are so I can enjoy watching my little feathered friends.

Perhaps instead of saying how unmotivated I've been about gardening lately, I should say I am taking a much-needed garden staycation, just enjoying the results of my work.  There will be time enough during the cooler days of autumn to get back to work.

Thanks to our faithful hostess Carol for hosting another Garden Bloggers' Bloom Day.  Check out May Dreams Gardens to see what else is blooming during these dog days of August.
Posted by Rose at 8:42 AM