March GBBD and Some Lessons From Winter

It is time once again for Garden Bloggers' Bloom Day, and while I expect my gardening friends farther south will be showing lots of colorful spring bloomers, no such luck here.  But there is hope, as you will see later. 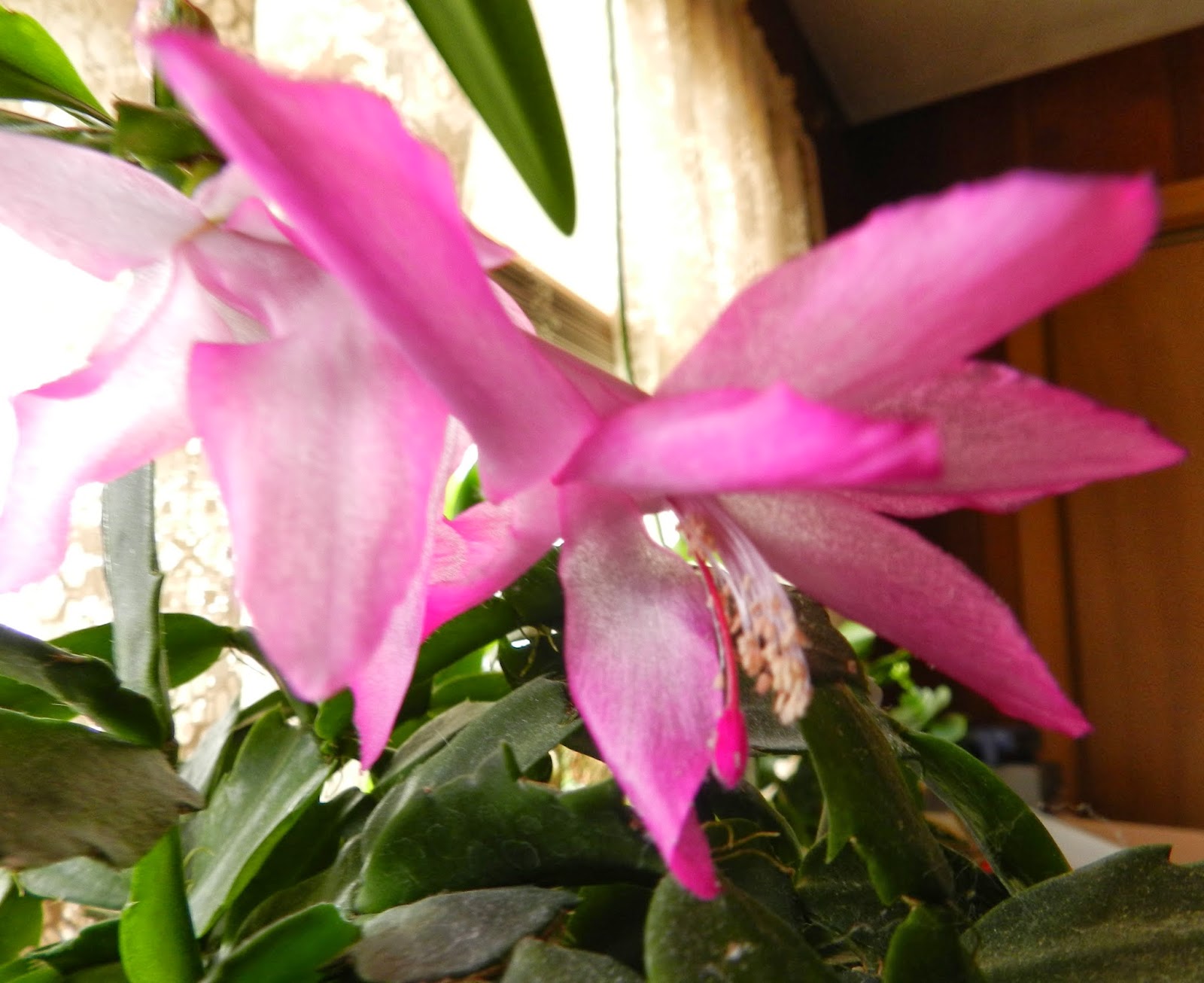 I think my little Christmas cactus is feeling sorry for me, because it has put out fresh blooms the past few weeks.  Perhaps it's a Christmas/St. Patrick's Day cactus instead.

As winter winds down and spring approaches--or so the calendar says--it is also time to join in Plant Postings' quarterly meme of lessons learned in the garden each season.  With the garden under a thick blanket of snow most of the past few months, I didn't think I had learned very much this winter,  but the more I thought about it, I realized there were some lessons to be found in spite of the cold weather. 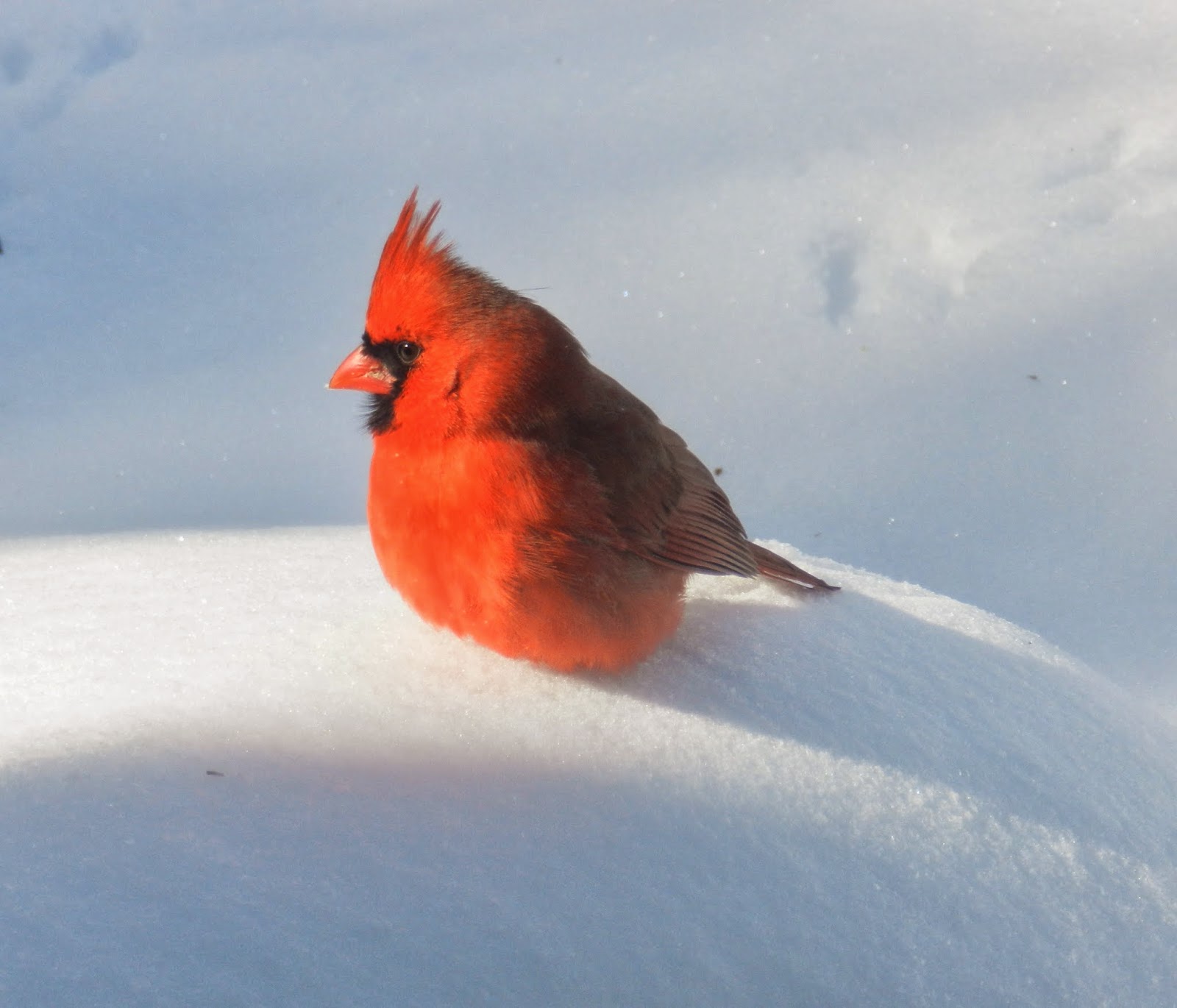 I learned that I really enjoy watching the birds from my window during the winter.  There may not be colorful blooms outside, but is there anything more beautiful than a bright red cardinal on freshly fallen snow? 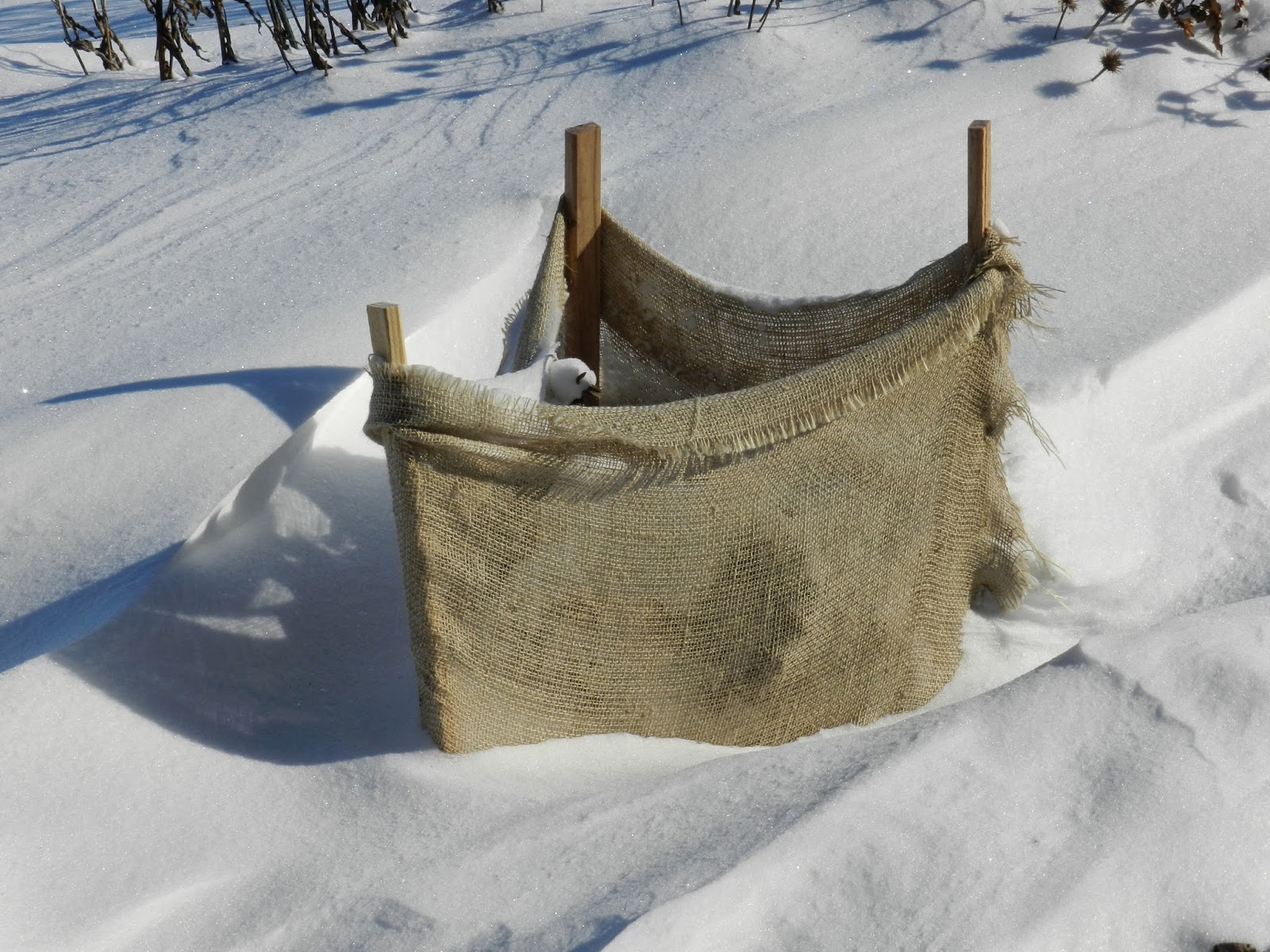 This winter has certainly taught me patience.  Not only am I anxious to get out and work in the garden again, but I'm anxious to know how a couple of my experiments are going to turn out.  I was worried how my new Encore Azaleas would fare through the winter, since they are marginally hardy here.  I carefully read some tips for overwintering on their website, which included the suggestion for covering them.  I drove stakes into the ground last November and stapled burlap to the stakes as a wind barrier.  I didn't cover the tops, though, which I hope wasn't a mistake.  I added some leaves around them as extra mulch, and then the snow added extra insulation.  I'll have to wait to see if they survived, but I am so glad I took these precautions--this winter would surely have killed them otherwise! 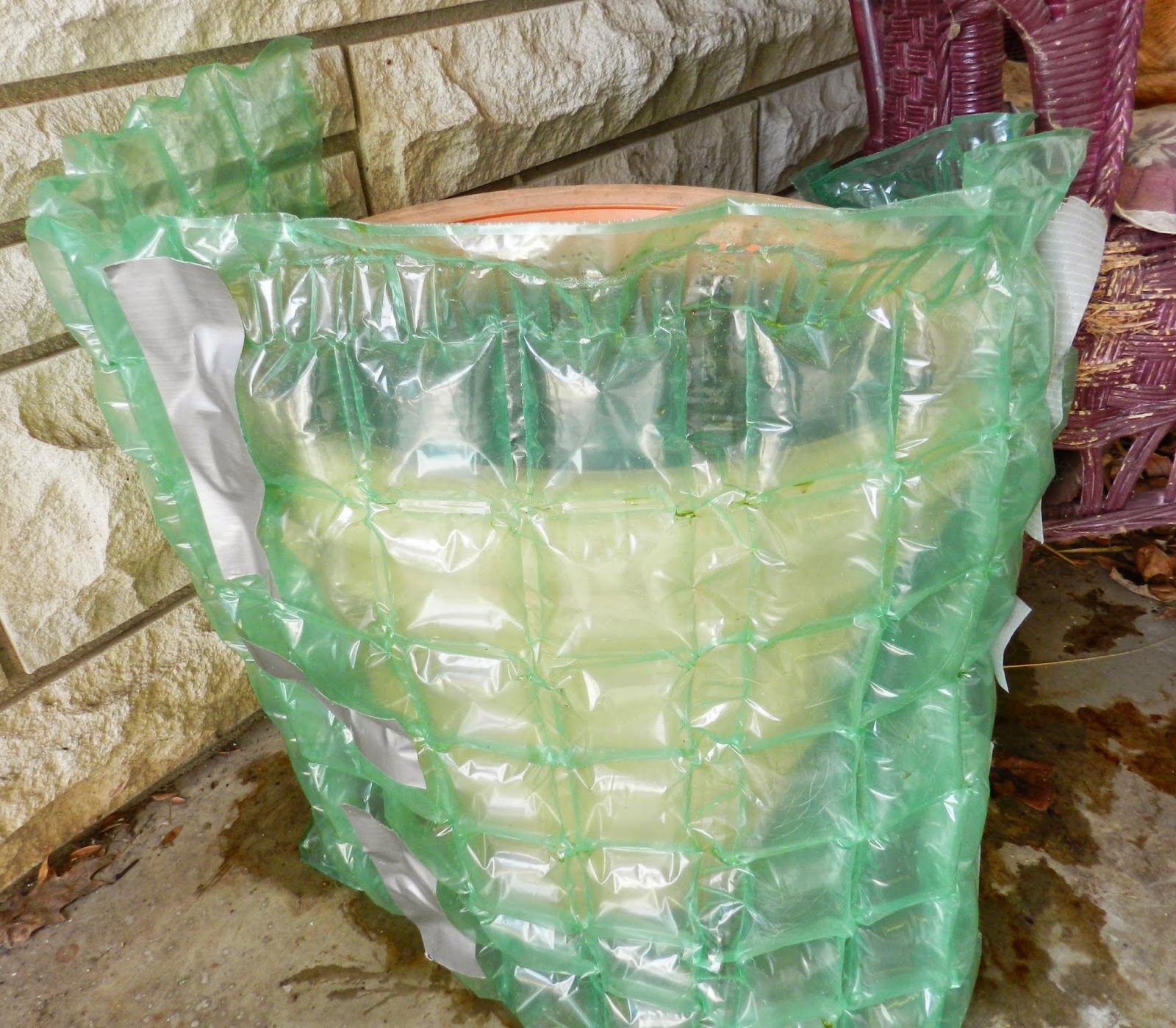 Another experiment whose results won't be known for awhile involved bulb planting.  As usual, I had some extra bulbs leftover from my fall planting, and rather than find one more bare spot to dig up some dirt, I decided to try planting them in a pot.  I had never done this before, and while it sounded simple enough, I thought I'd better check if there were any specific tips for pots.   Dee at Red Dirt Ramblings  had written about just this very topic, so I asked for her advice.  Because of the smaller area of a pot, they should be treated as two zones colder than normal.  In other words, while my garden is in zone 5/6, the bulbs in this pot would feel like they were in zone 3 or 4.  I placed the pot on the back porch, which is usually sheltered from the fierce winds, but Dee suggested adding a layer of bubblewrap for even more protection. I didn't water it, but whenever I shoveled snow off the driveway, I dumped some clean snow on top--one pile sat there for two months before melting! Surely, the worst of winter is over, so this week I'm going to move the pot onto the patio and remove the bubblewrap.  If these tulips are a success, I'm going to try Dee's idea of "lasagna planting" in a pot next year. 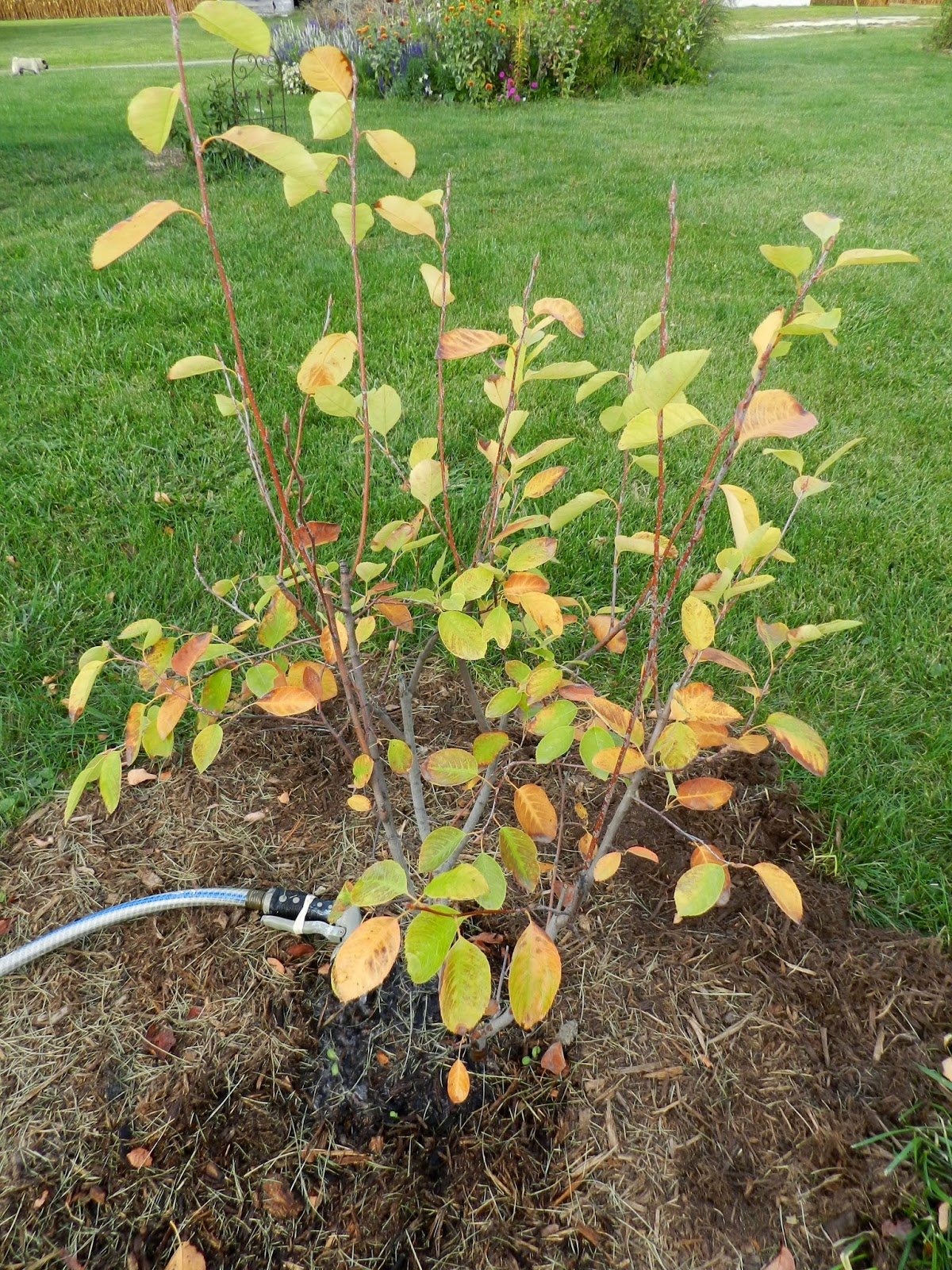 This winter has been a reminder of what true winter in the Midwest is like.  We've been spoiled the last two years with mild winters, so this year has been a challenge in many ways.  Plants that have been happy in the garden for a few years may have been so shocked by this year's fierce weather that they won't survive.  I'm especially concerned about a few new plants I planted last fall, including this serviceberry, a tree I have been wanting for a long time.  It's a native, though, and pretty tough, so I am pretty confident in its chances.  I mulched it well after planting, and Frank the pug has made sure it has been well-watered all winter, though that "watering" may have done more damage than winter itself:) 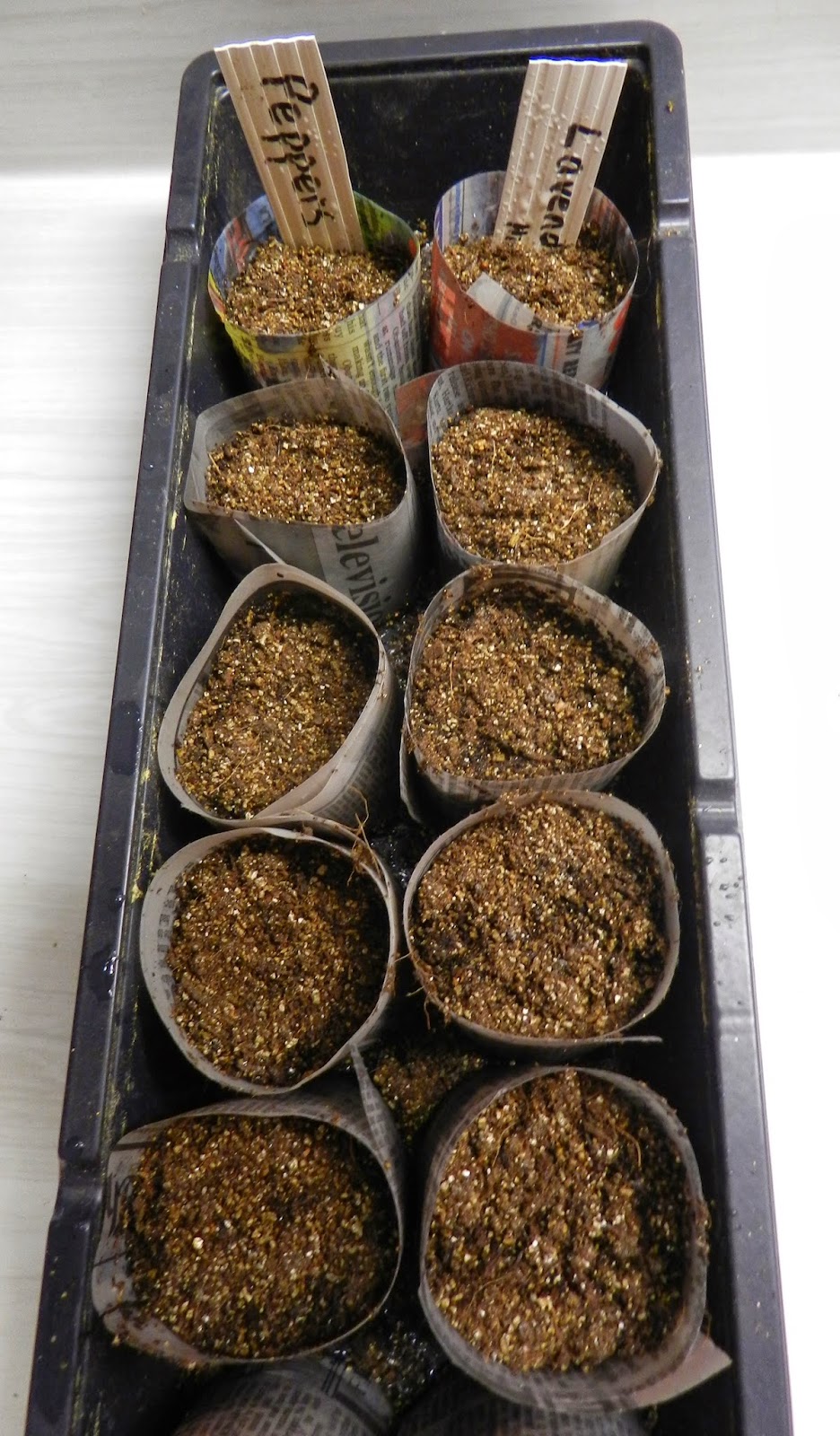 Despite my complaints this year, I really do enjoy winter.  It's just that when it drags on and on, I've had enough.  One of the ways to combat those winter-weary blues is to start some seeds indoors, which I started this week.  With our average last frost date over eight weeks away, I have plenty of time to fill up several more trays in the next couple of weeks.  There's nothing like playing in a little dirt and opening seed packets to chase away the blues and get excited about gardening once again. 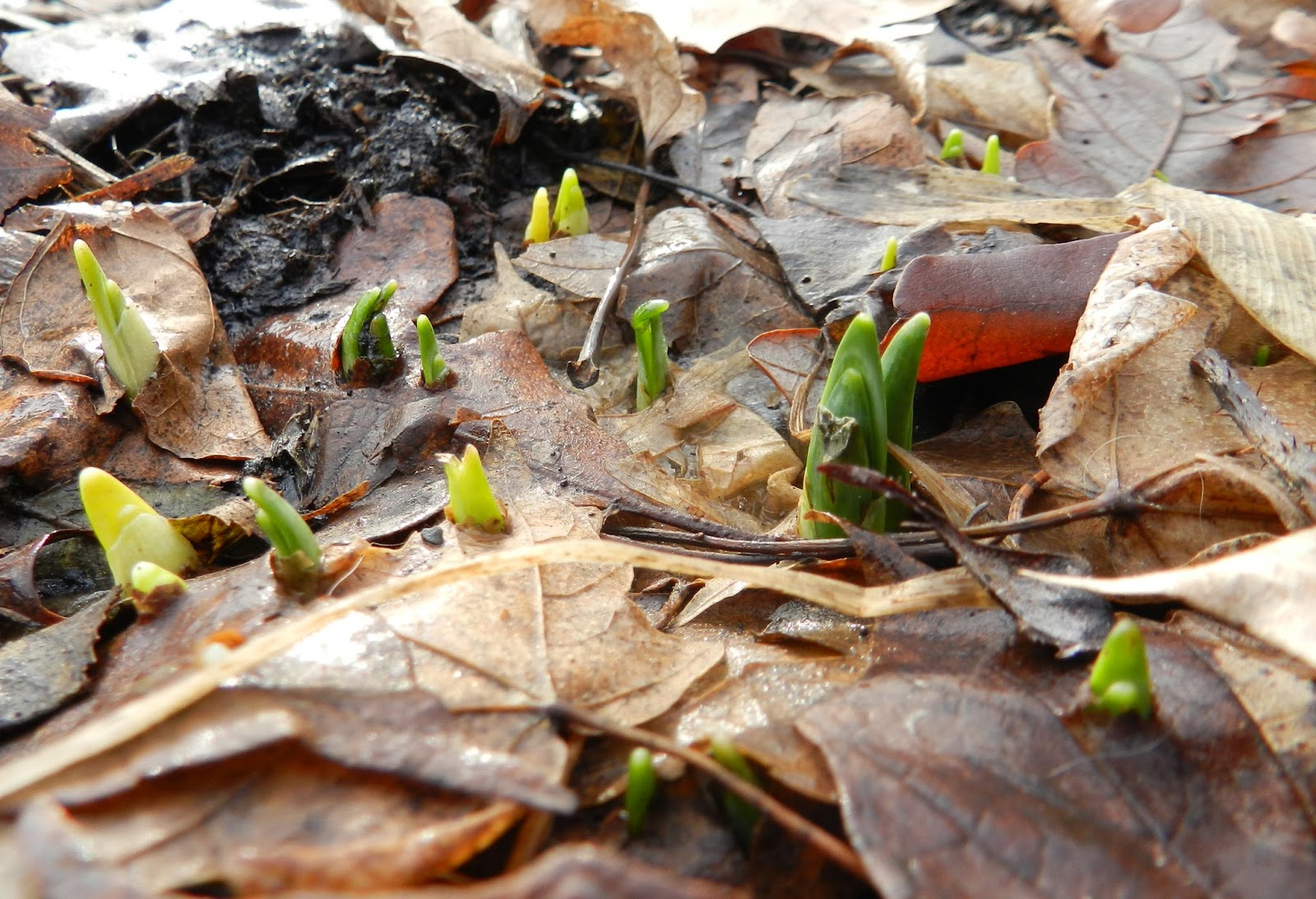 Winter has taught me a lot about patience, but the best part of winter for me is that it makes me appreciate spring that much more.  After months of looking at white or brown, finding these green shoots poking through the soil and matted leaves yesterday makes me so excited.  Tulips? Daffodils?  It really doesn't matter, because to me they represent hope and a reassurance that, yes, spring will come after all!

Garden Bloggers' Bloom Day is brought to you the 15th of each month by May Dreams Gardens' Carol, who is probably out getting ready to plant peas this weekend.

Lessons Learned in the Garden is hosted at the end of each season by Beth at Plant Postings.  Check them both out!
Posted by Rose at 8:22 AM