One of the highlights of March for me every year is attending the Chicago Flower and Garden Show at Navy Pier.  There's nothing quite like seeing masses of spring blooms and creative displays of plantings to get one rejuvenated and inspired, especially after a long, hard winter like this one.  In case you missed it or don't live close enough to visit this annual show, here's a quick tour of what was on display this year. 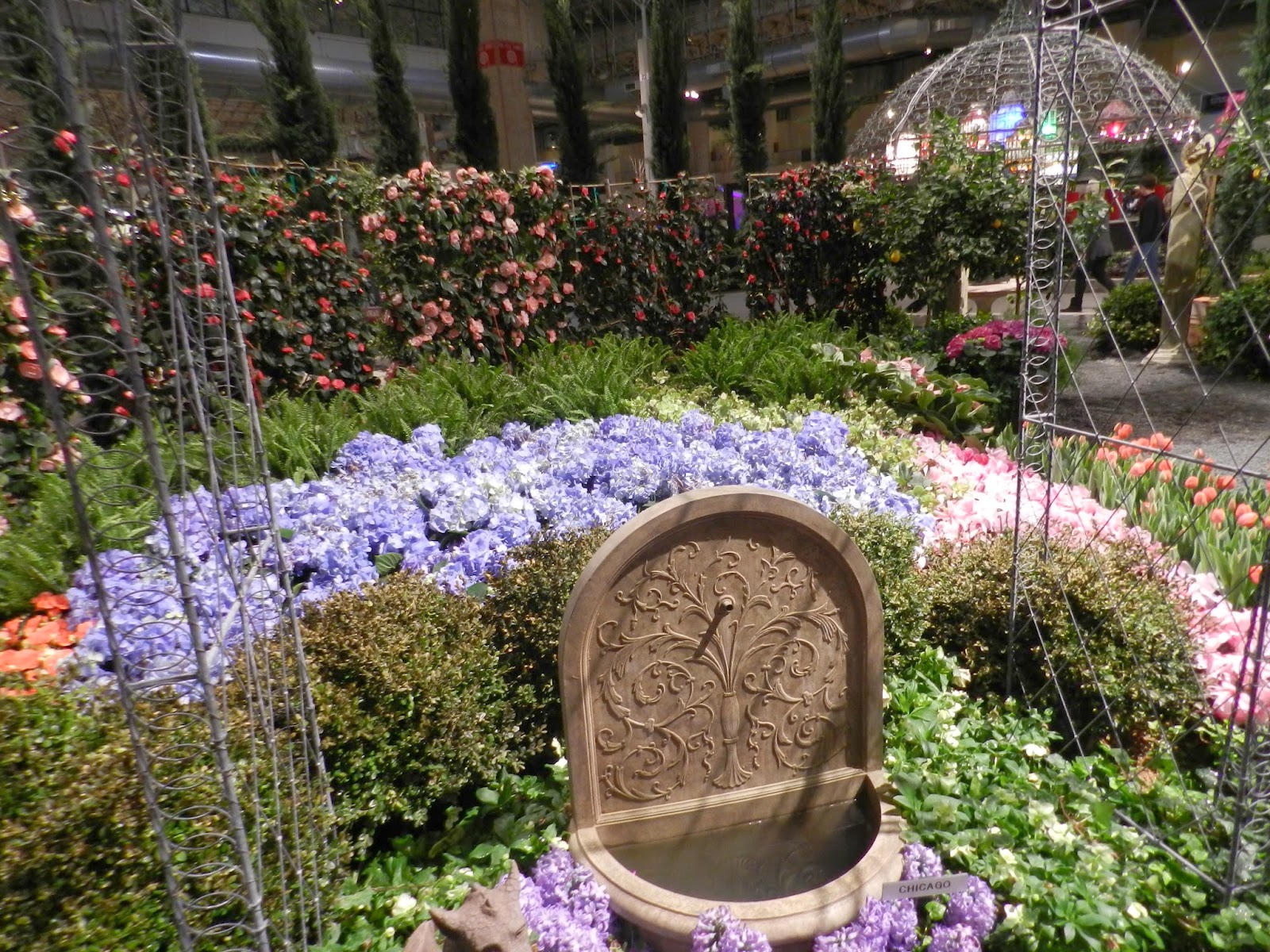 It was a gray, rainy day when best friend Beckie and I headed north.  All thoughts of the weather left us, though, as we entered the exhibit and were greeted by masses of blooms and the heady scent of hyacinths and other fragrant plants. 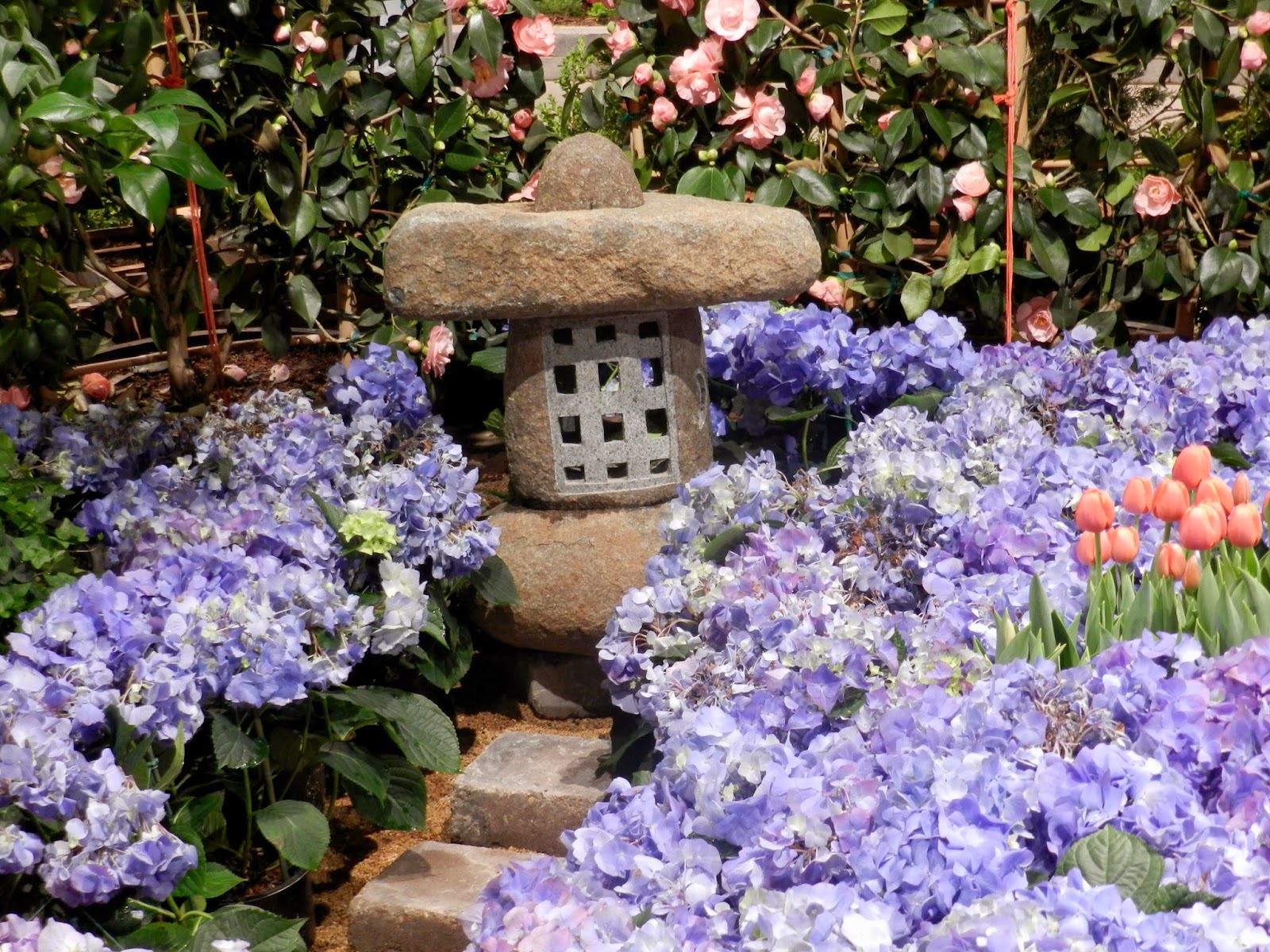 Blue hydrangeas seemed to be a popular choice in several plantings. 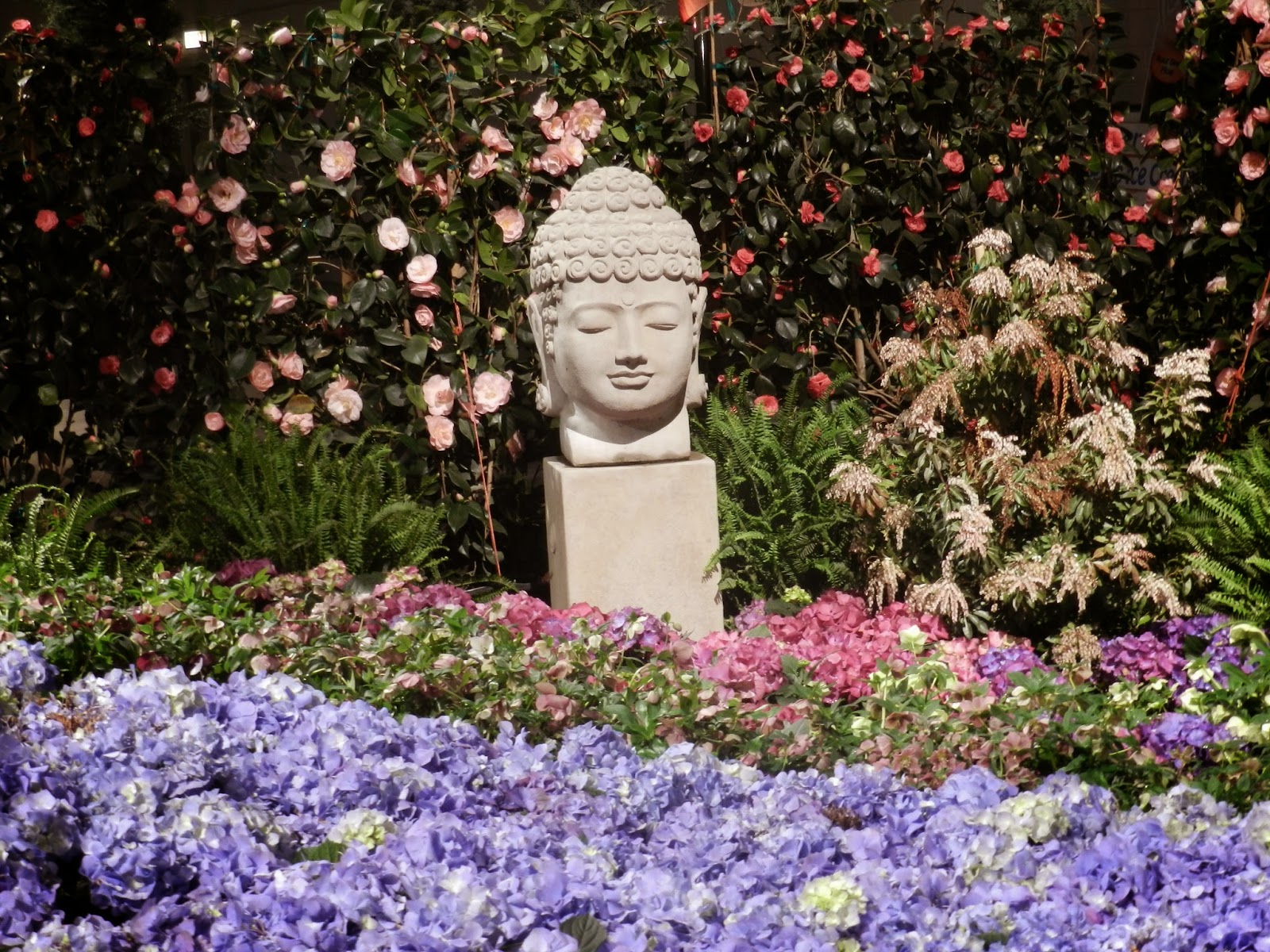 Asian-inspired accents always appeal to me. 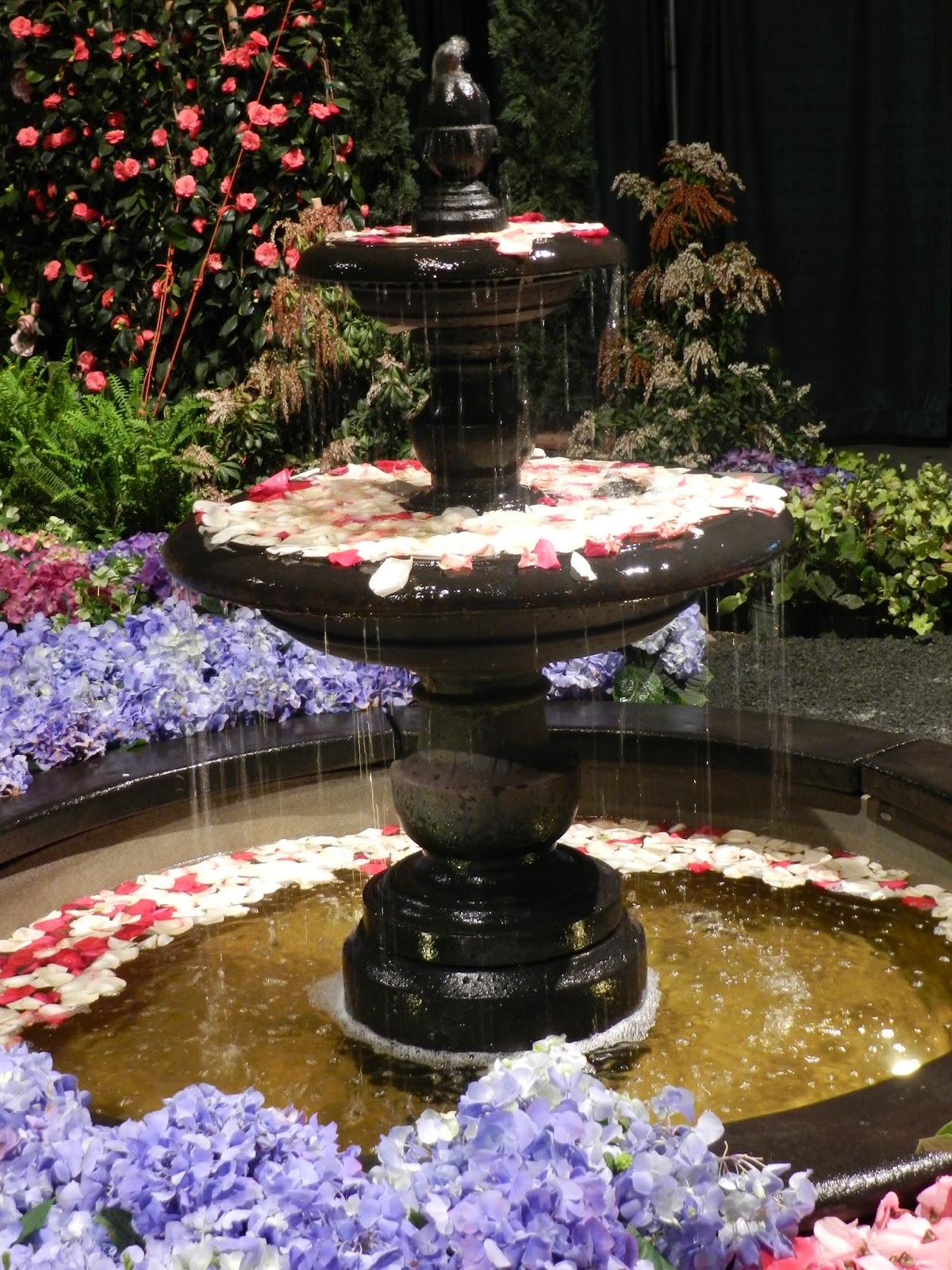 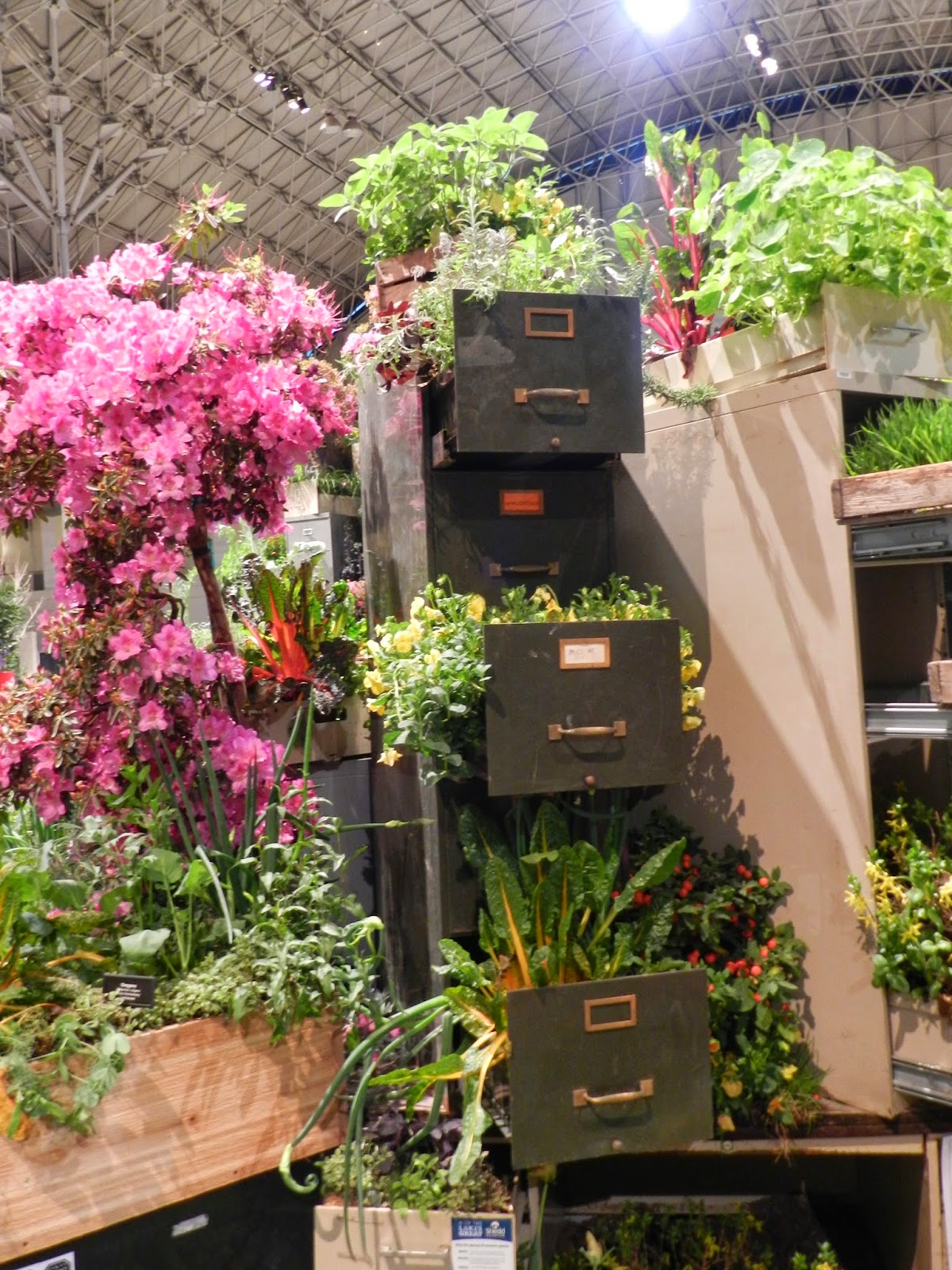 The theme of this year's show was "Do Green, Do Good" and featured creative ways of repurposing old materials. 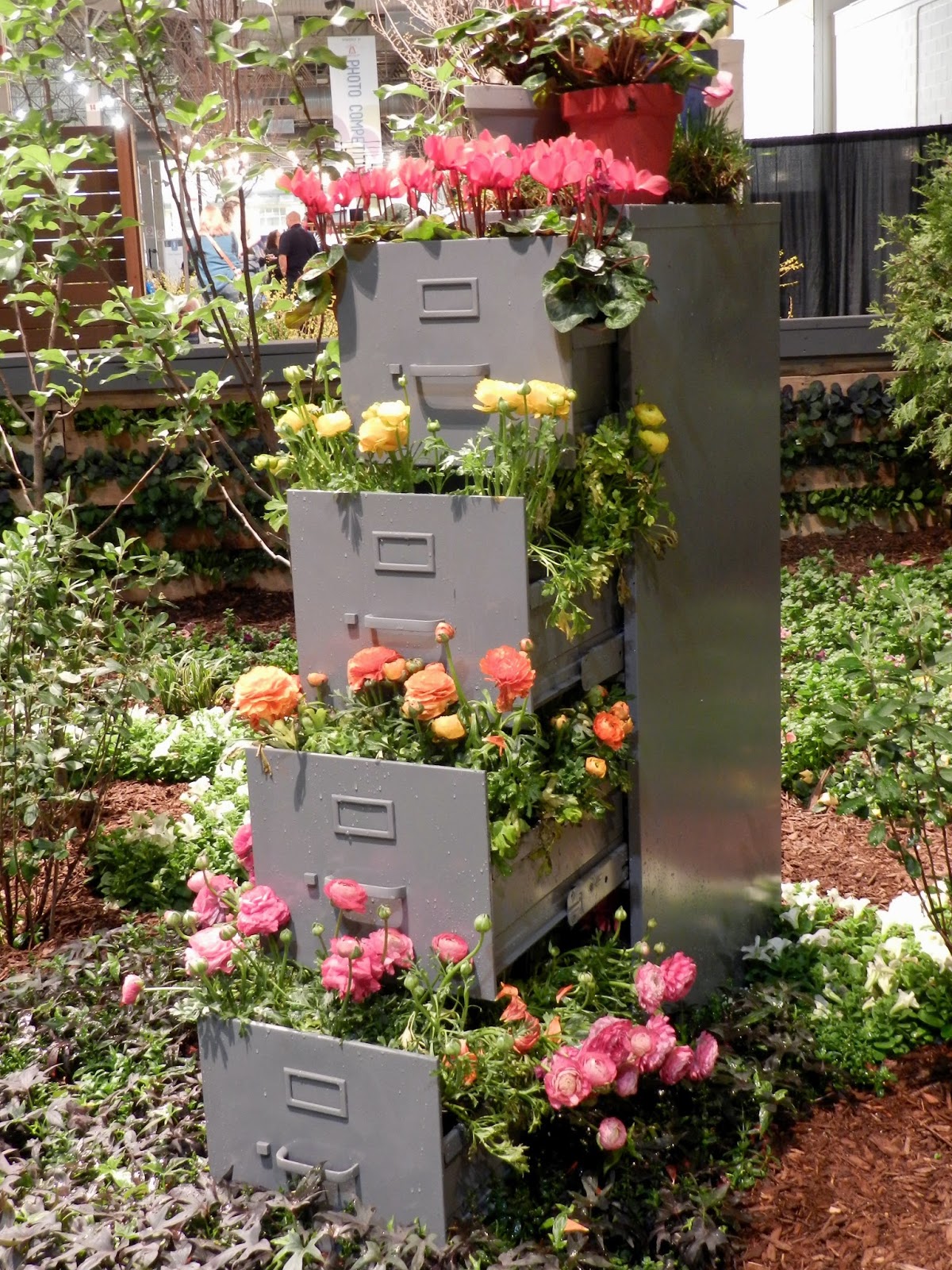 Maybe I could clean out my basement and put all the castoffs in the garden:) 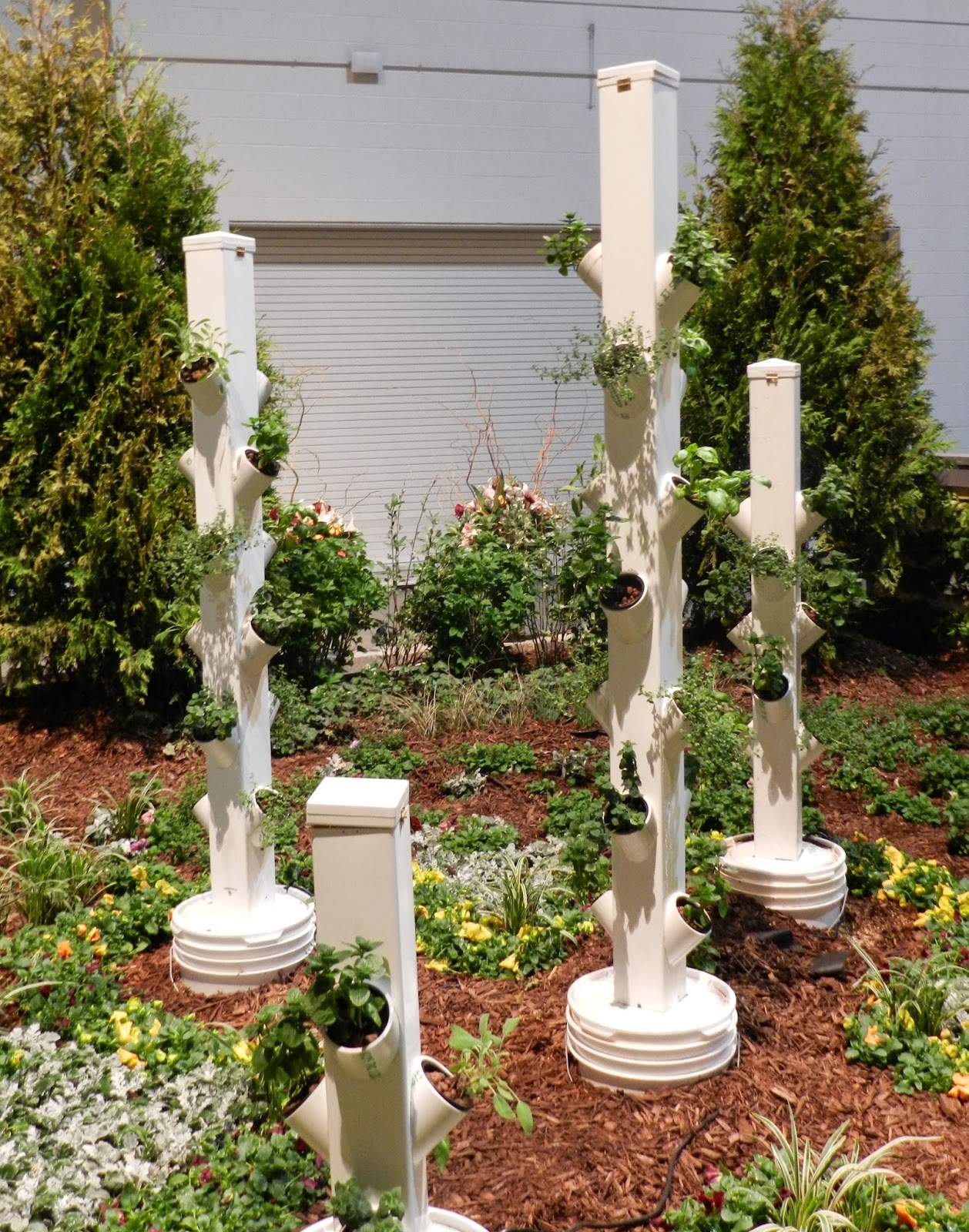 One of the most clever creations was in the display created by the Chicago High School for Agricultural Sciences.  One of the students explained to me how these planters were made--holes were cut into fence posts, and then pieces of PVC pipe were inserted and filled with soil for the plants.  The fence posts were then inserted into plastic pails, which served as a water reservoir, I believe.  This school has an exhibit at the show every year, and I'm always so impressed by the creativity of these students. 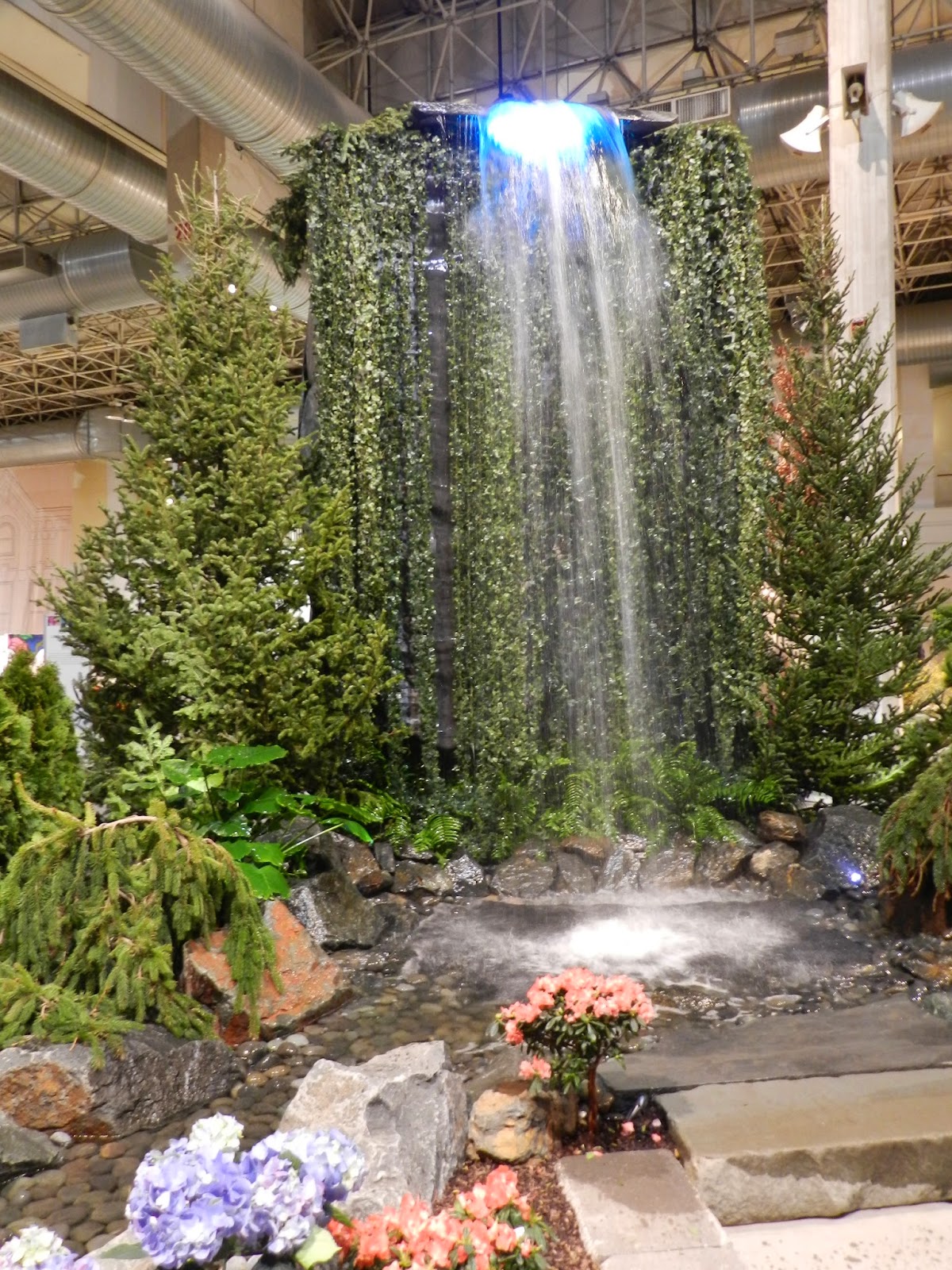 The most elaborate exhibit was built by a company specializing in water features and hardscaping. 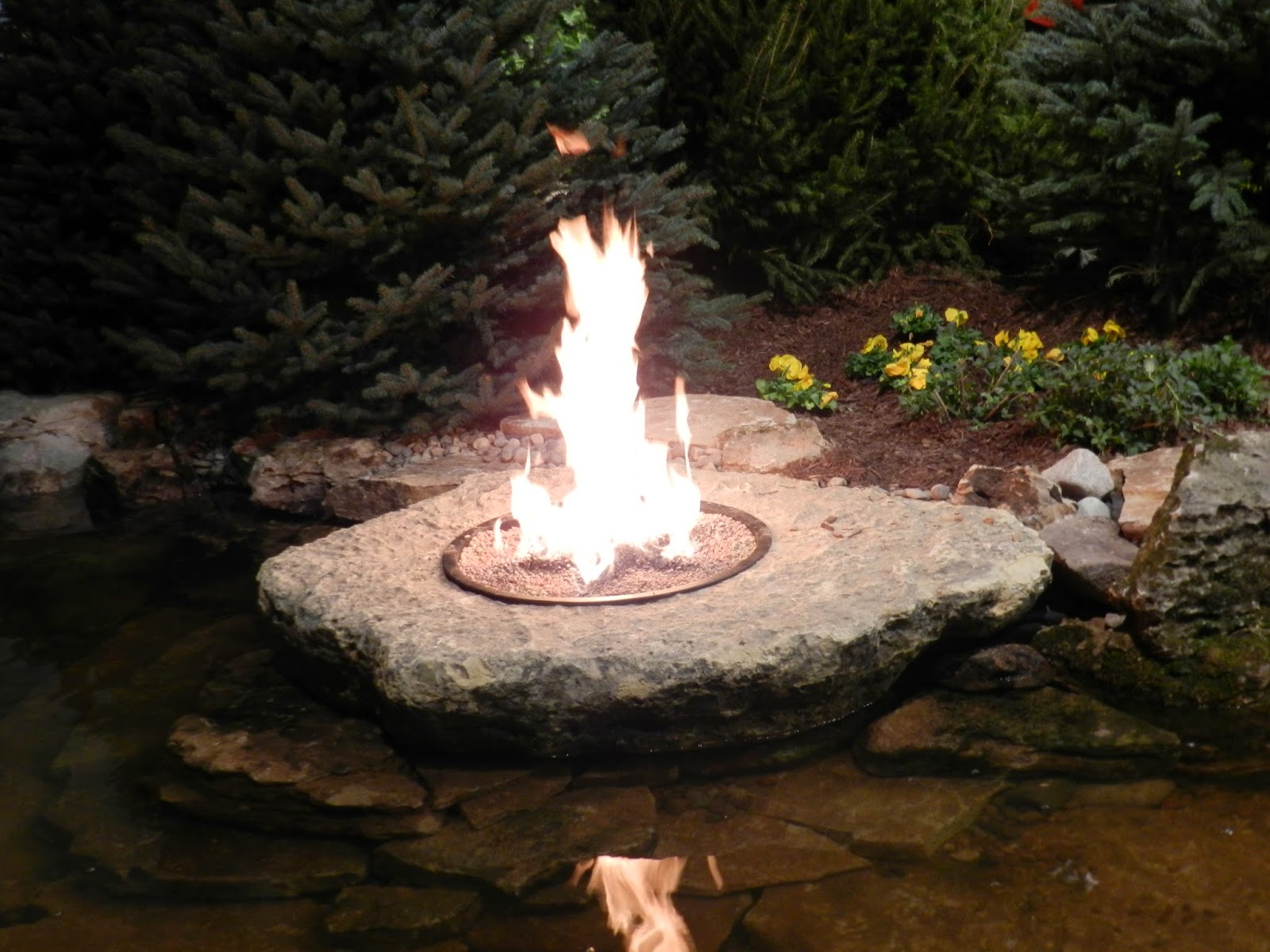 A fire pit at the end of the pond. 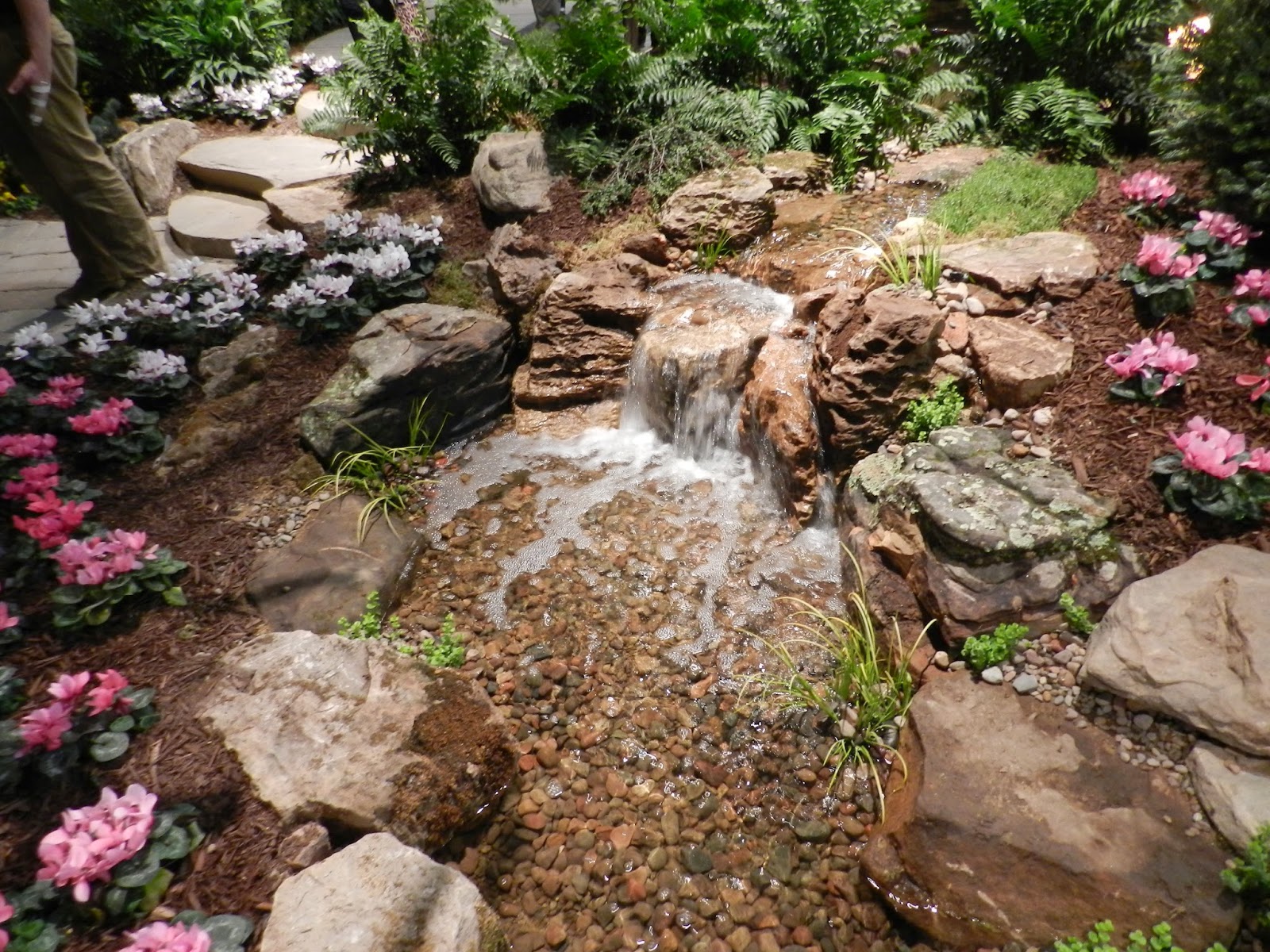 I'm always amazed by the work that goes into what is, after all, only a temporary display.  Creating an area like this in your own garden, complete with large rocks, stone walls, and flowing streams would probably take weeks or months, but the sales rep told me it took eight men only eight days to complete this...and then they have to take it all apart a week later! 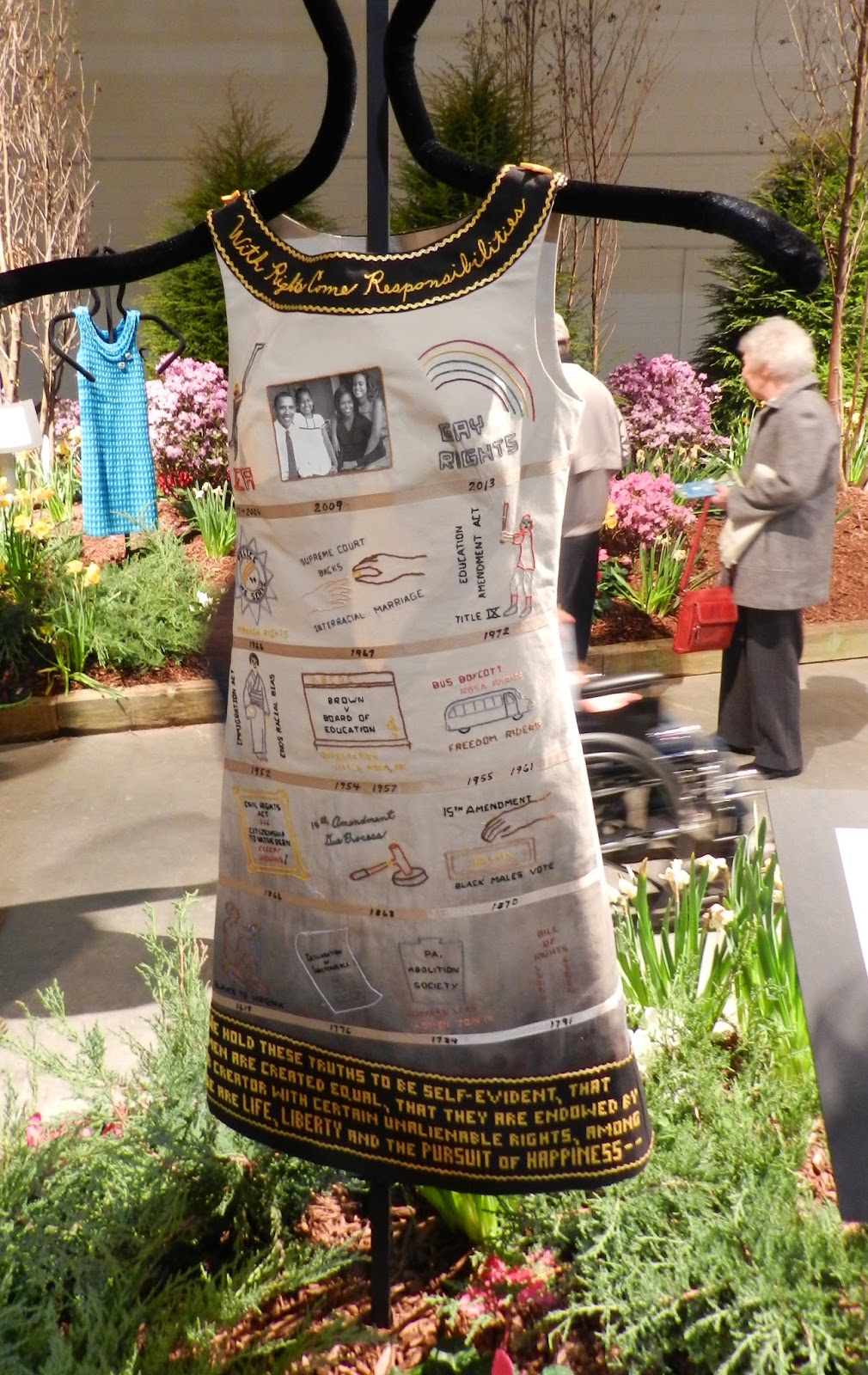 There is so much to see and do at the Chicago Show--gardening seminars, cooking demonstrations, and a photo exhibit, just to name a few--that it is hard to fit it all in in a short day.  Beckie and I always enjoy the exhibit by the Women's Journeys in Fibers who have used hats and shoes as their medium in past years.  This year's theme was "Paradigm Shifts," and the artists were asked to take a basic shift dress to express themselves.  This particular dress traced the progress of civil rights in our country. 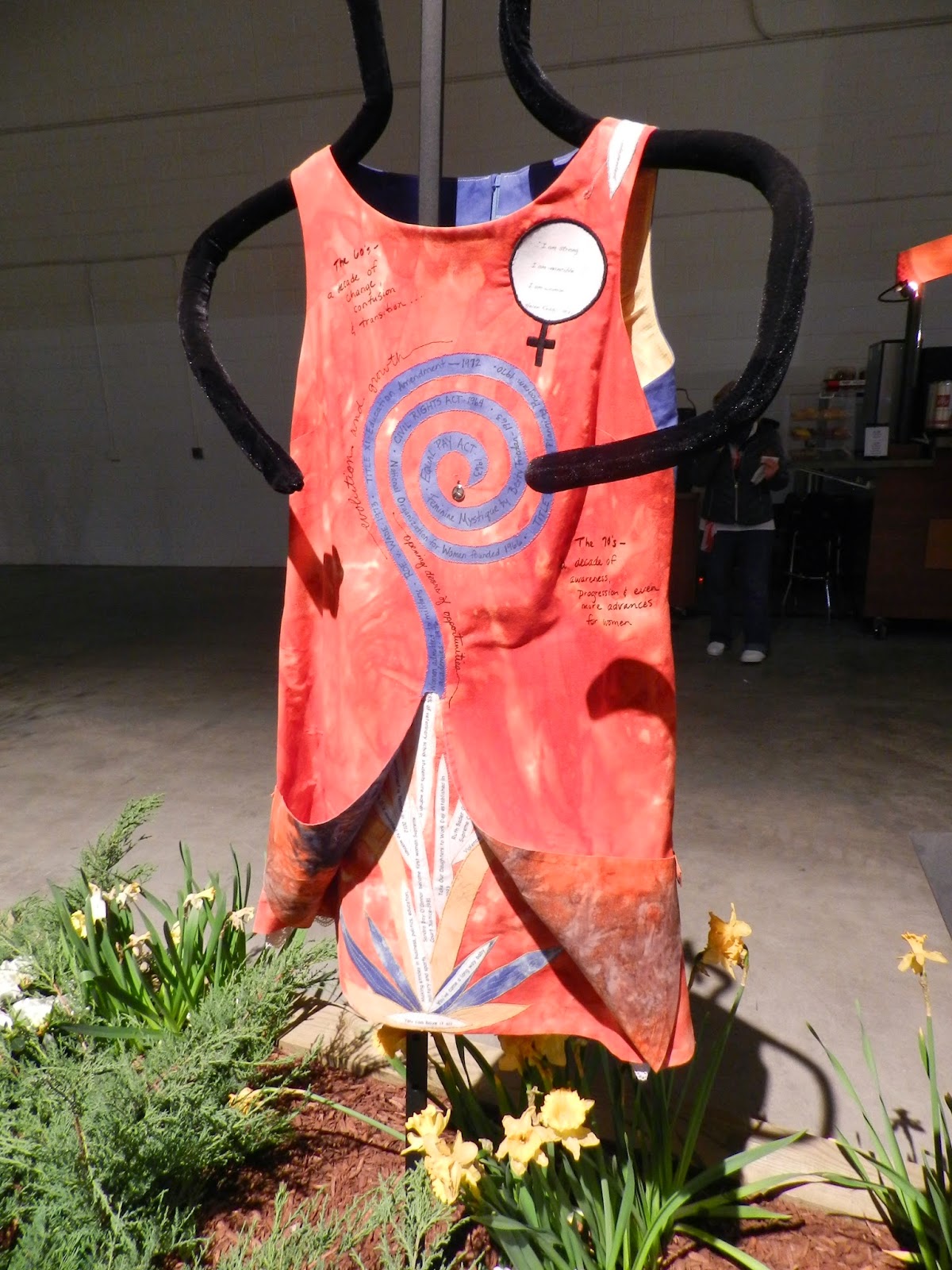 Another illustrated the shift in the roles of women, from the 50's housewife to today. 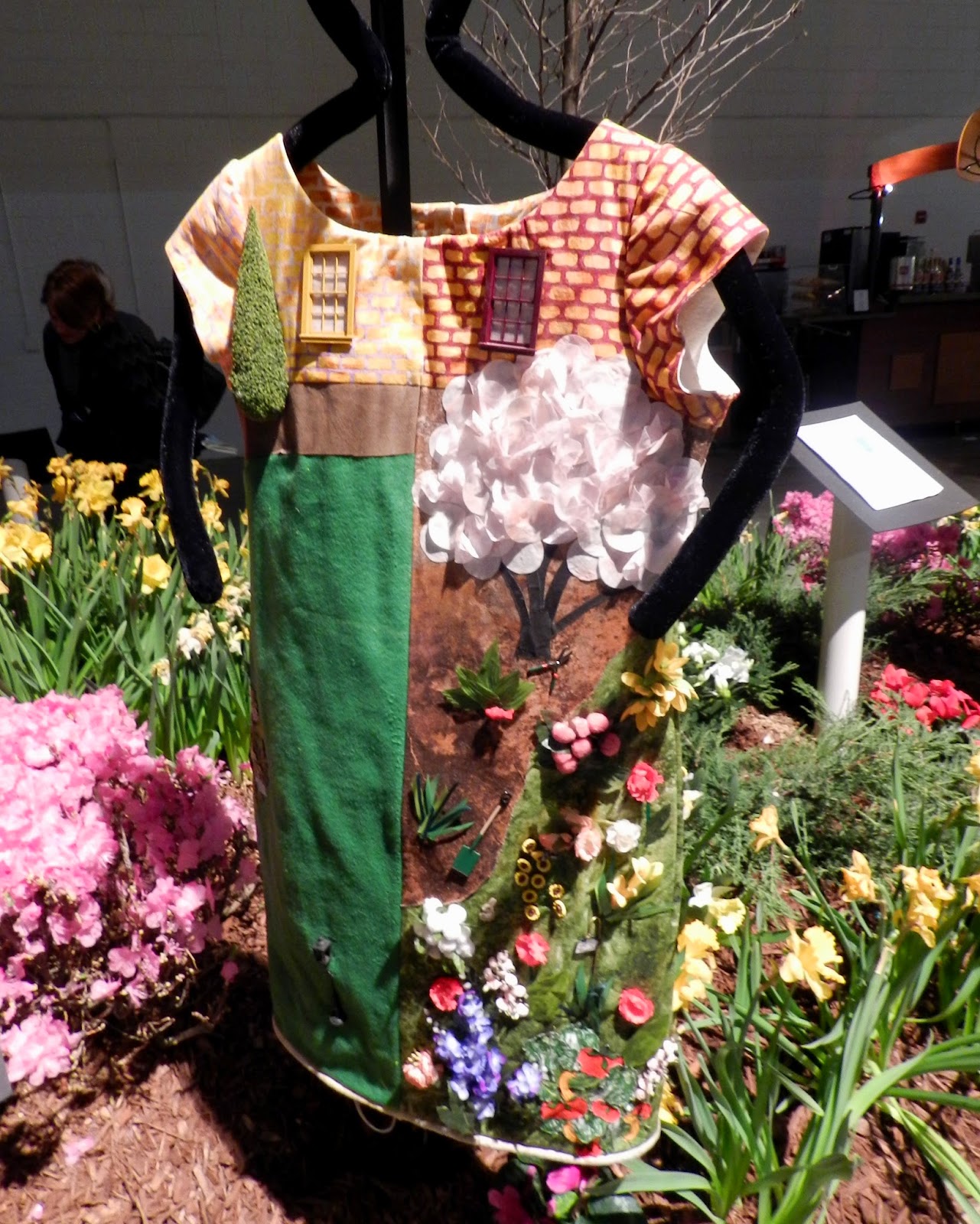 This one was entitled "In the Garden,"  expressing the artist's growing love of gardening. 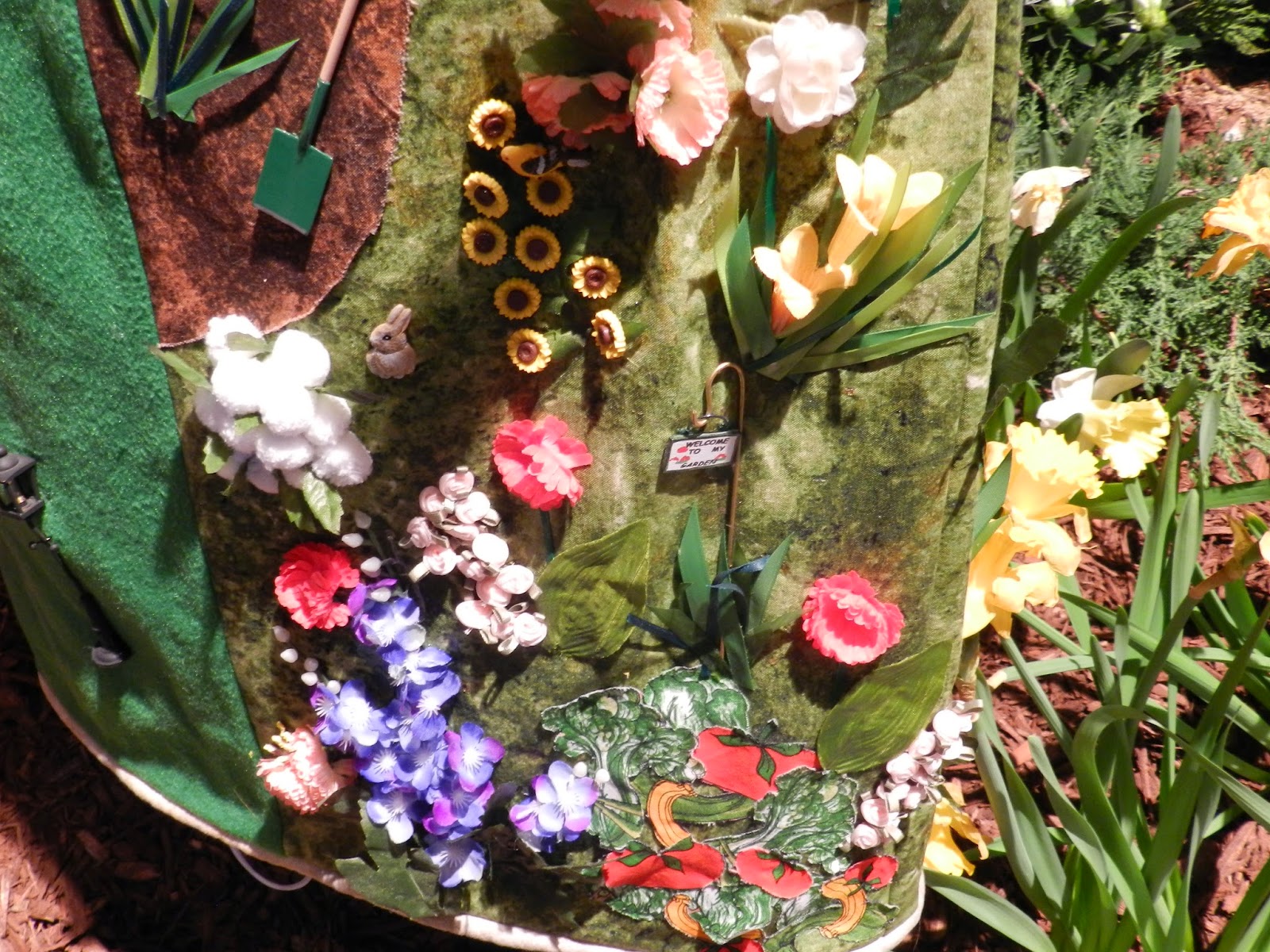 Look at the detail on this dress! 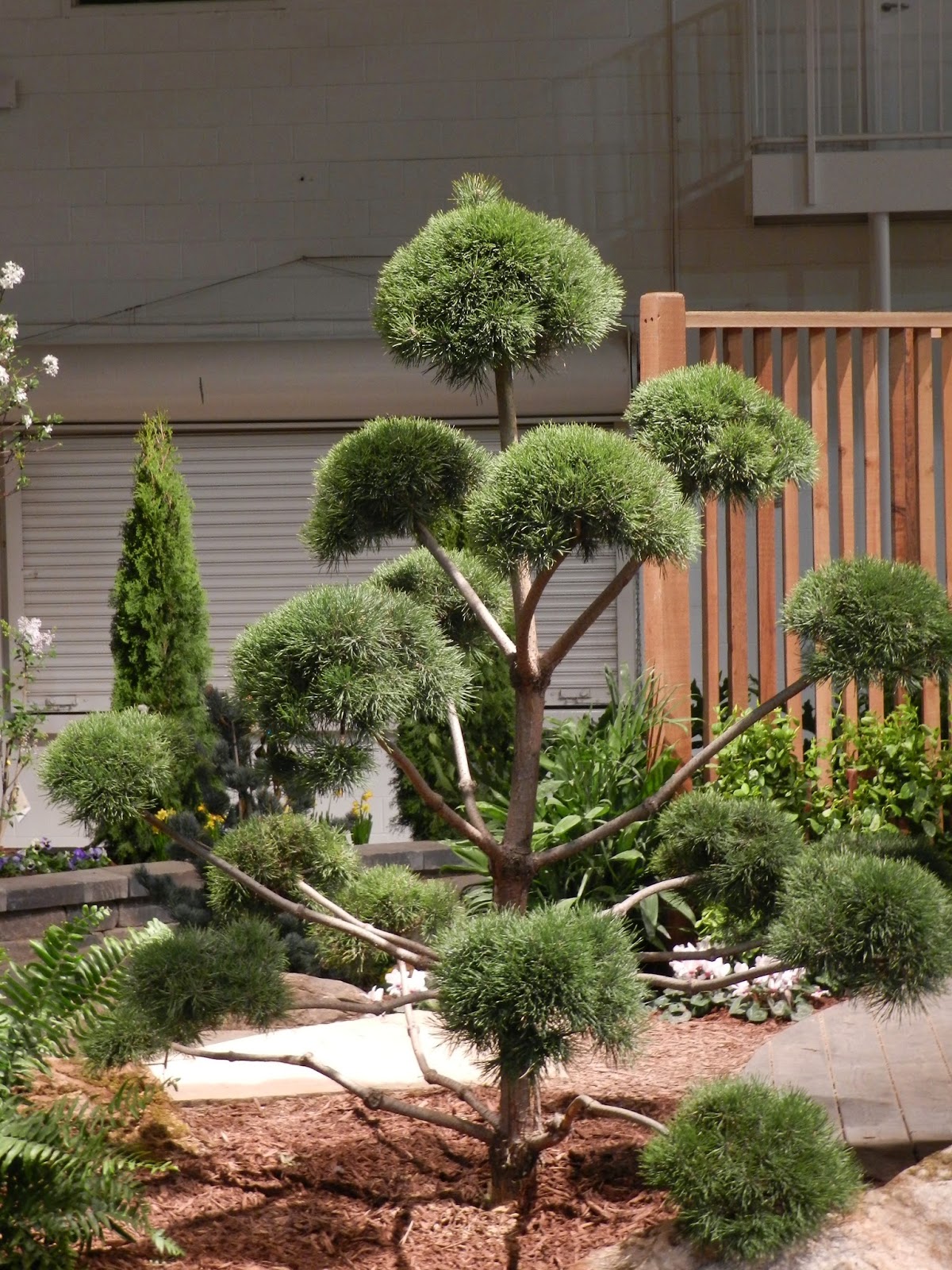 Some other sights along the way . . . 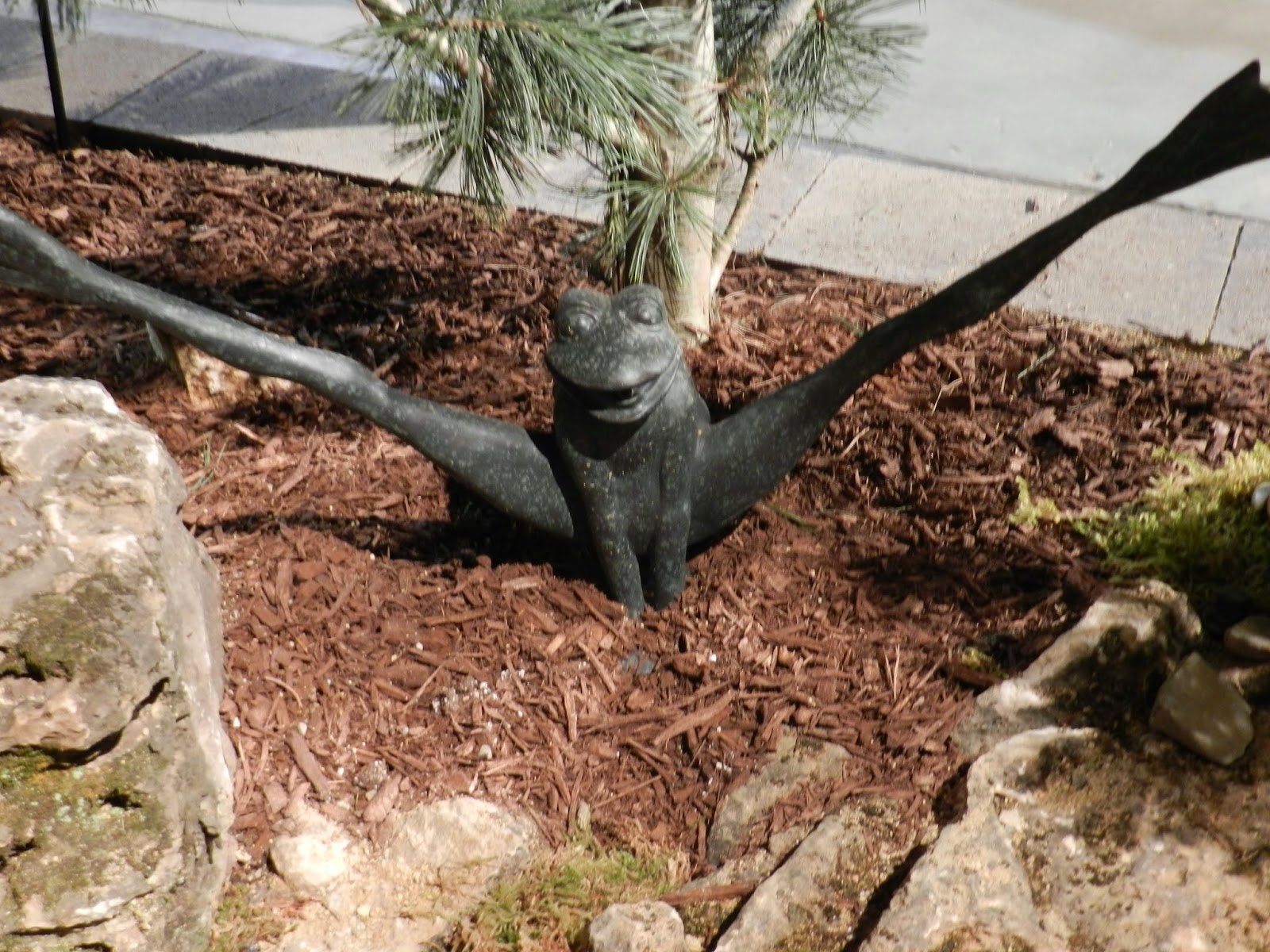 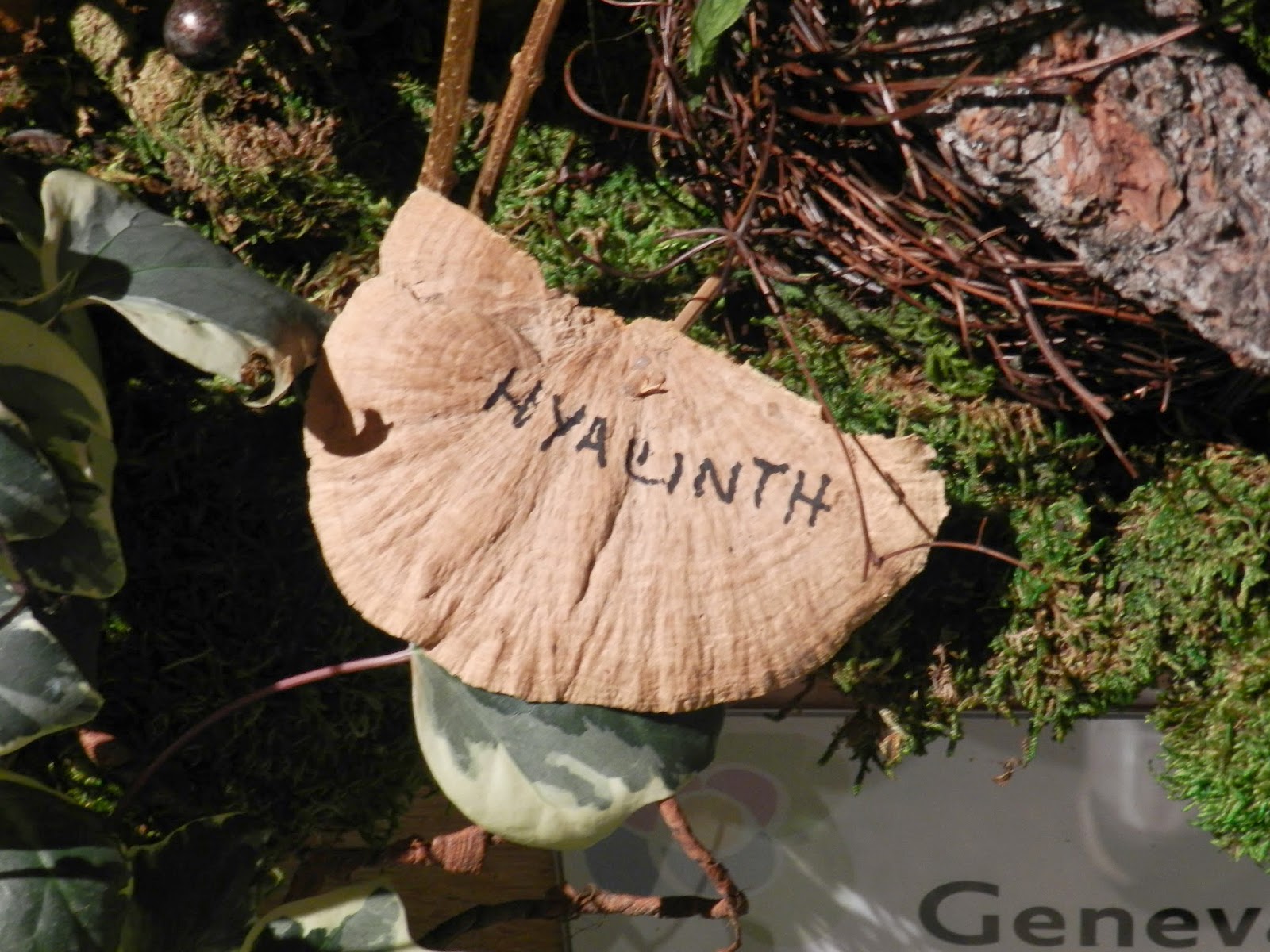 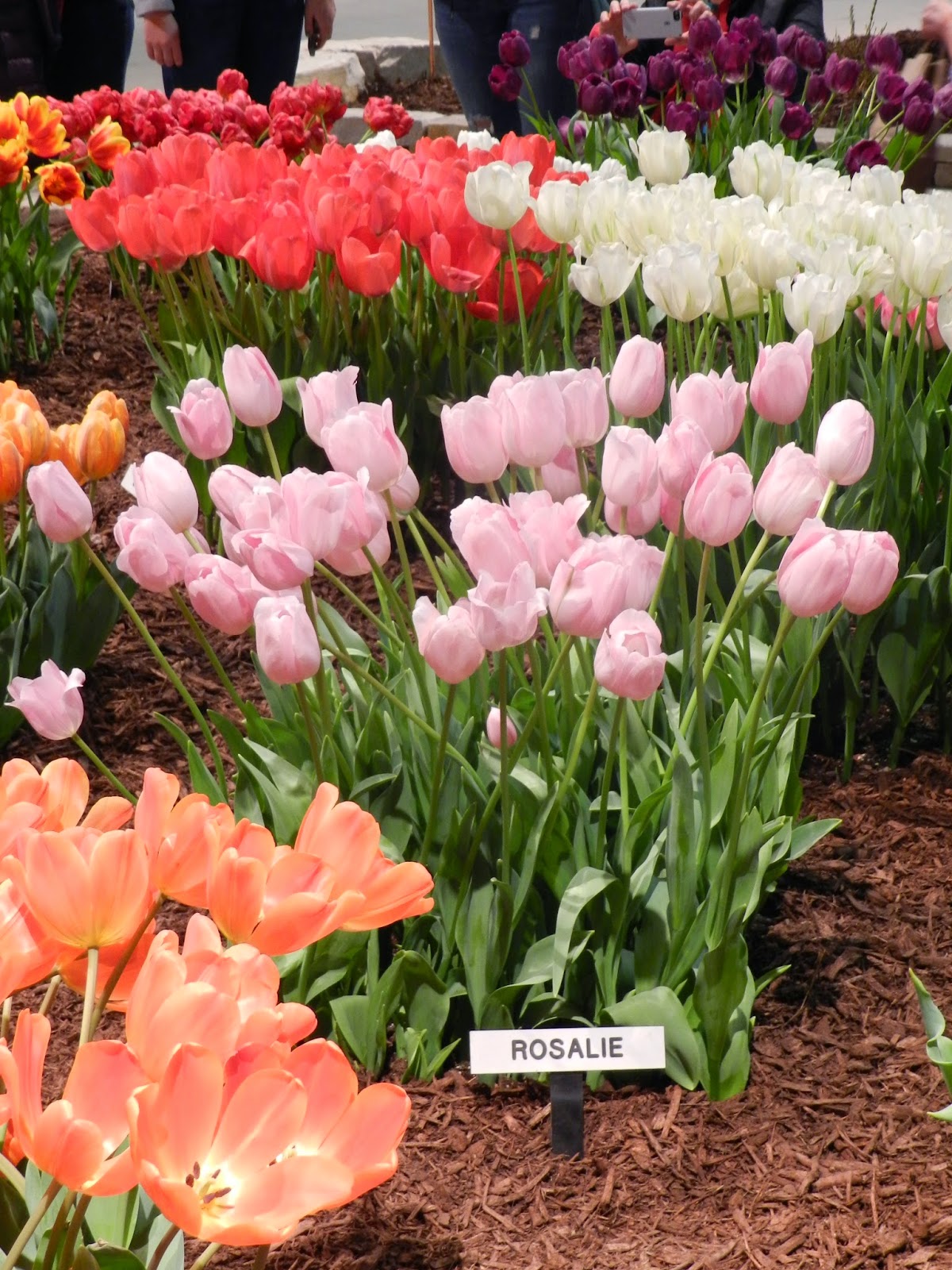 Before we had to leave to catch our train, we made sure to allow some time to stroll through the vendors' booths at one end of the exhibit hall.  Last year we finally discovered that the gorgeous display of tulips that always entices me is presented by a wholesale bulb distributor who has a booth in the vendor marketplace, where any of  the tulips in the display can be ordered for fall planting.  These caught my eye last year, and I just had to have them.  I'm still waiting to see them in my own garden, but I hope in a few weeks, my "namesakes" will be blooming here. 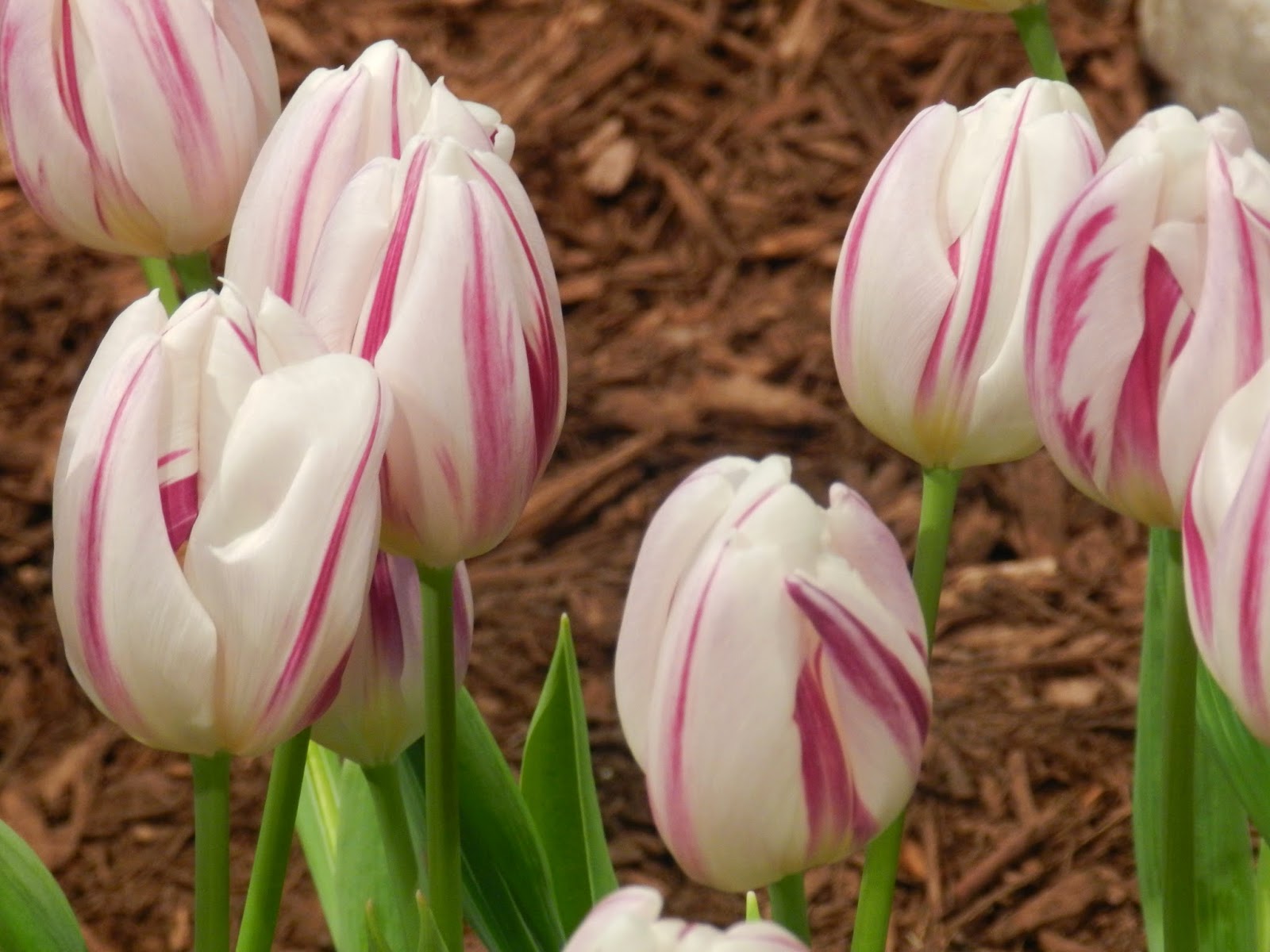 This year my eye was caught by these 'Flaming Flag,'  but darned if I didn't forget them by the time I placed my order.  Oh well, maybe next year. 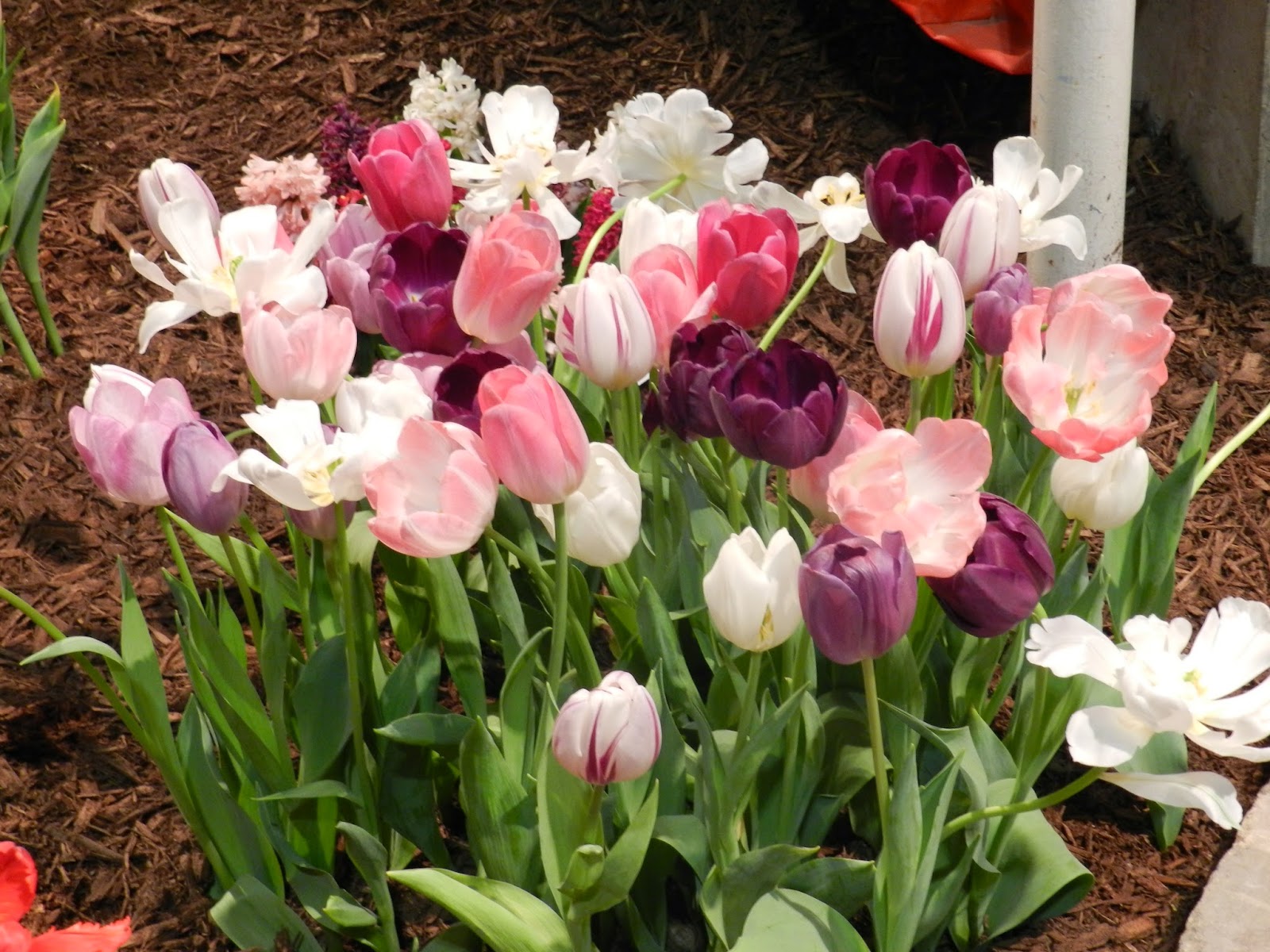 I did, however, order two collections of 'Patrick's Mix,' above--my favorite shades of pastels.  I even got to meet Patrick, a friendly bulb grower from the Netherlands who assured me that these were sturdy, long-lived beauties.  I can't wait to see these in my garden a year from now!

Someone commented in either a Facebook or blog post that she thought this was the best Chicago show ever.  Beckie and I disagreed; it was an average show, far from the best we've seen.  Some of the regular exhibitors had smaller displays than past years, and few, other than the pond company's, weren't as elaborate as some we have seen in the past.  Perhaps that was due in part to the theme this year which emphasized recycling and planting edibles.  Past themes, like the theatre theme from a few years ago, seemed to invite more whimsy and creativity.  Still, this year's show was certainly worth the trip, and it was a breath of fresh spring air for this winter-weary gardener.  We'll definitely be making plans to go again next year!
Posted by Rose at 8:21 AM