Long-time readers of this blog know that I love Japanese gardens, so much so that I created my own little miniature Japanese garden this past summer. I've visited several Japanese gardens, both private and public, but my favorite has always been the Portland Japanese Garden in Oregon, which I've been fortunate enough to visit a couple of times and hope to see again this summer. Hailed by a Japanese dignitary as "the most authentic Japanese garden outside of Japan,"  the Portland garden is a magnificent place, a refuge of serene beauty.

Imagine my surprise, then, when a local expert on Japanese gardens told me some time ago that the number one Japanese garden in the U.S. was no longer the Portland garden, but instead one much closer to home--the Anderson Japanese Garden in Rockford, Illinois.   An Illinois garden more beautiful than the one in Portland--really??  I was very skeptical, but vowed to see the Rockford garden and judge for myself one day.

Rockford is only a three-hour drive from where I live, so this August when friend Beckie and I decided we needed a short girlfriends' getaway, it was the first place that came to my mind. 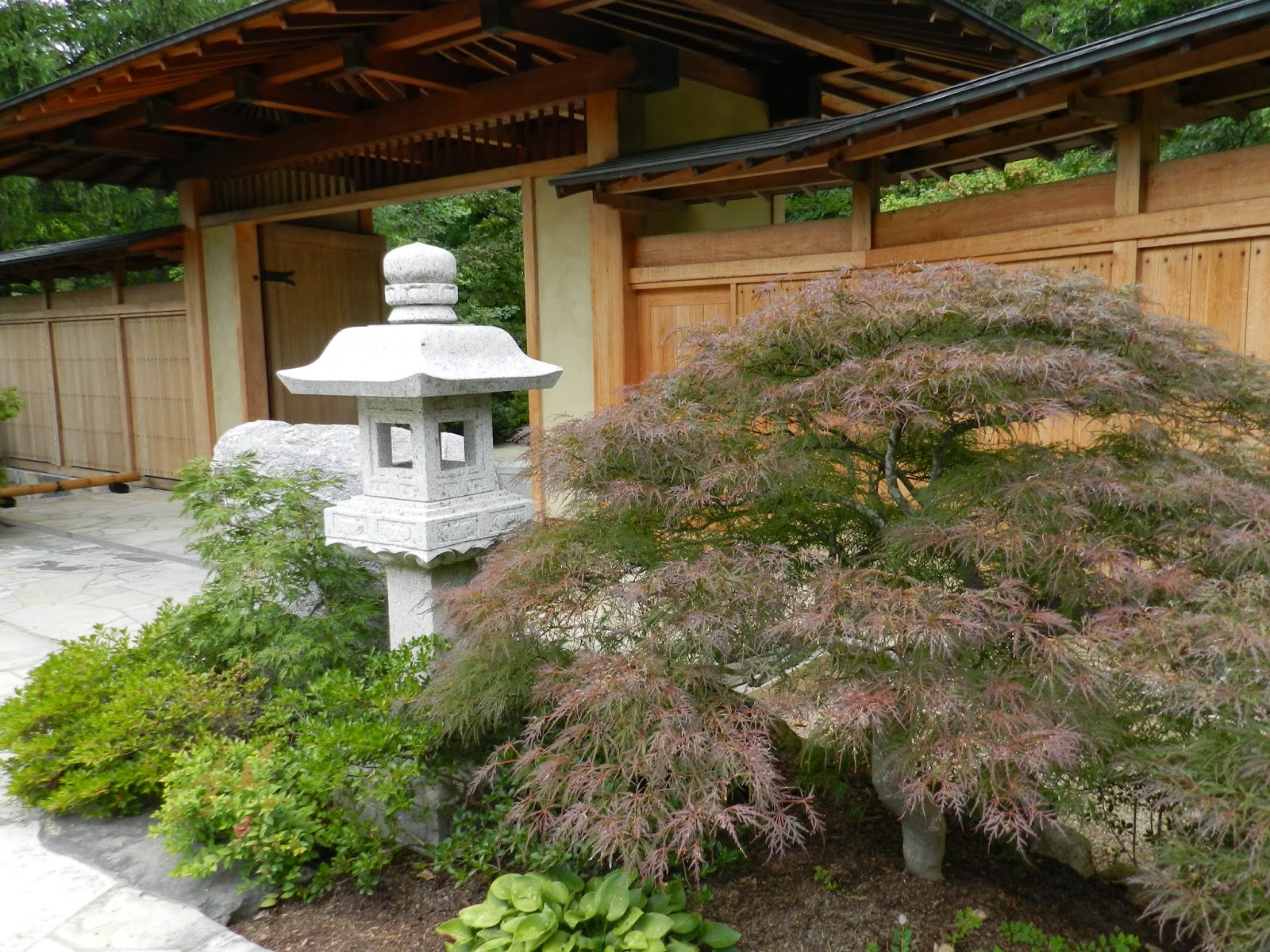 I knew when we finally arrived that this was a special place, and I was excited to see it.  But I must admit to being a bit prejudiced; for the first half hour as we strolled down one path to another, I kept comparing the Anderson Garden to the Portland Garden. 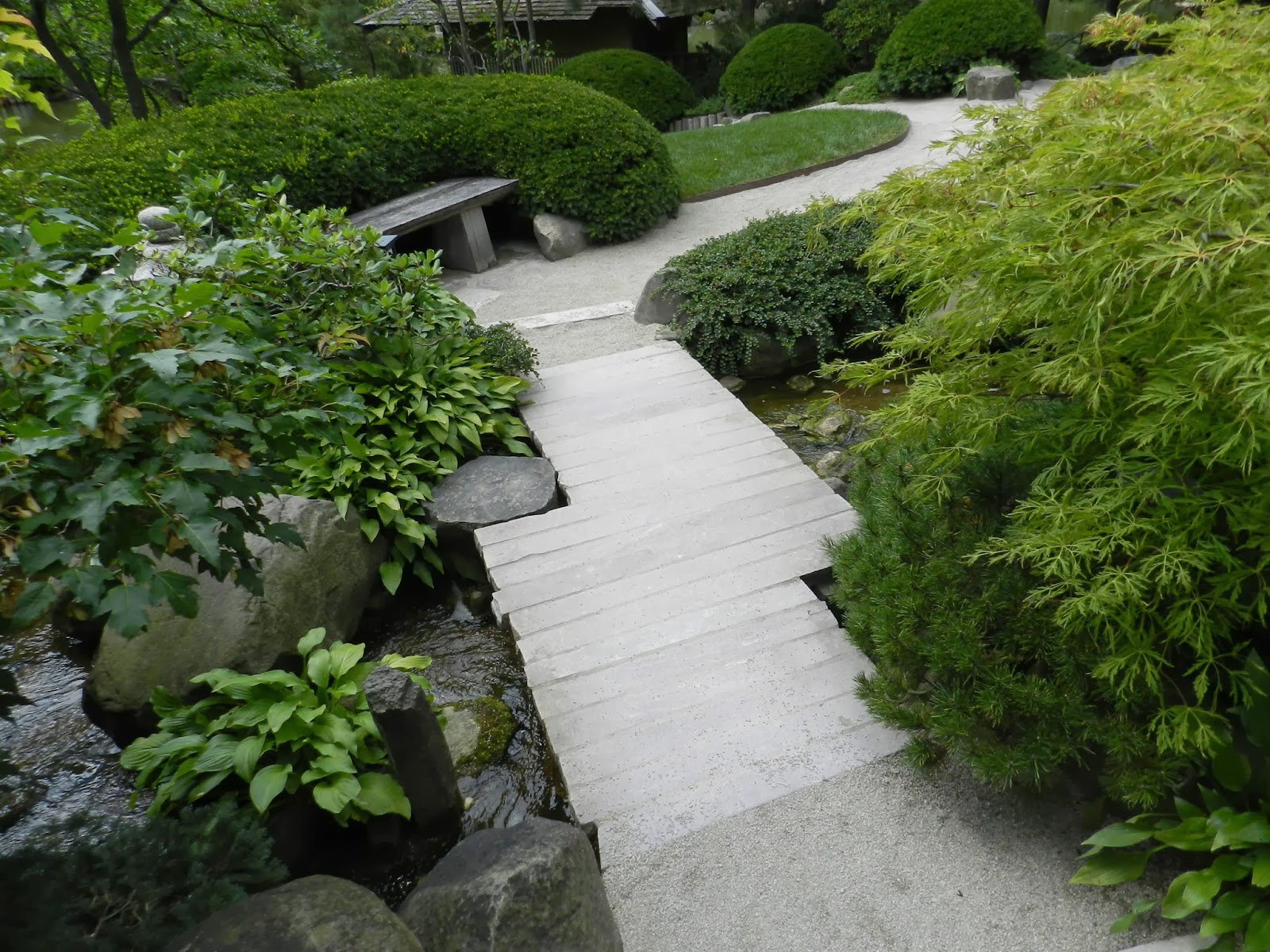 I've learned just enough about Japanese gardens to be an obnoxious pseudo-expert on the subject.  I immediately recognized the traditional zig-zag bridge. Although artfully designed, it was rather small, I thought smugly. 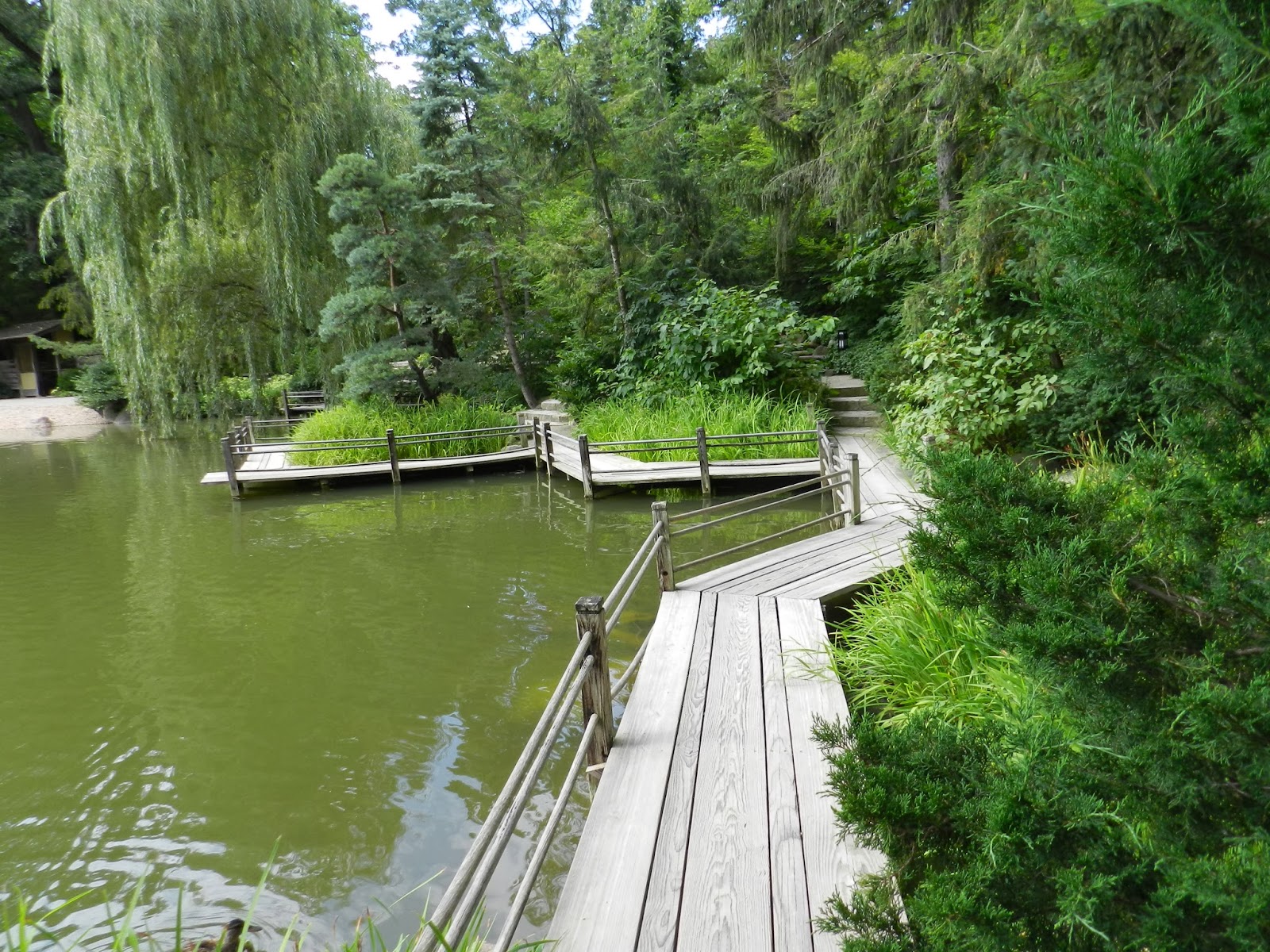 Until later, when we came to this--now this is a zigzag bridge!  According to traditional Zen philosophy, the zigzag bridge helps the garden visitor to focus on the here and now, especially since these bridges often have no railings. 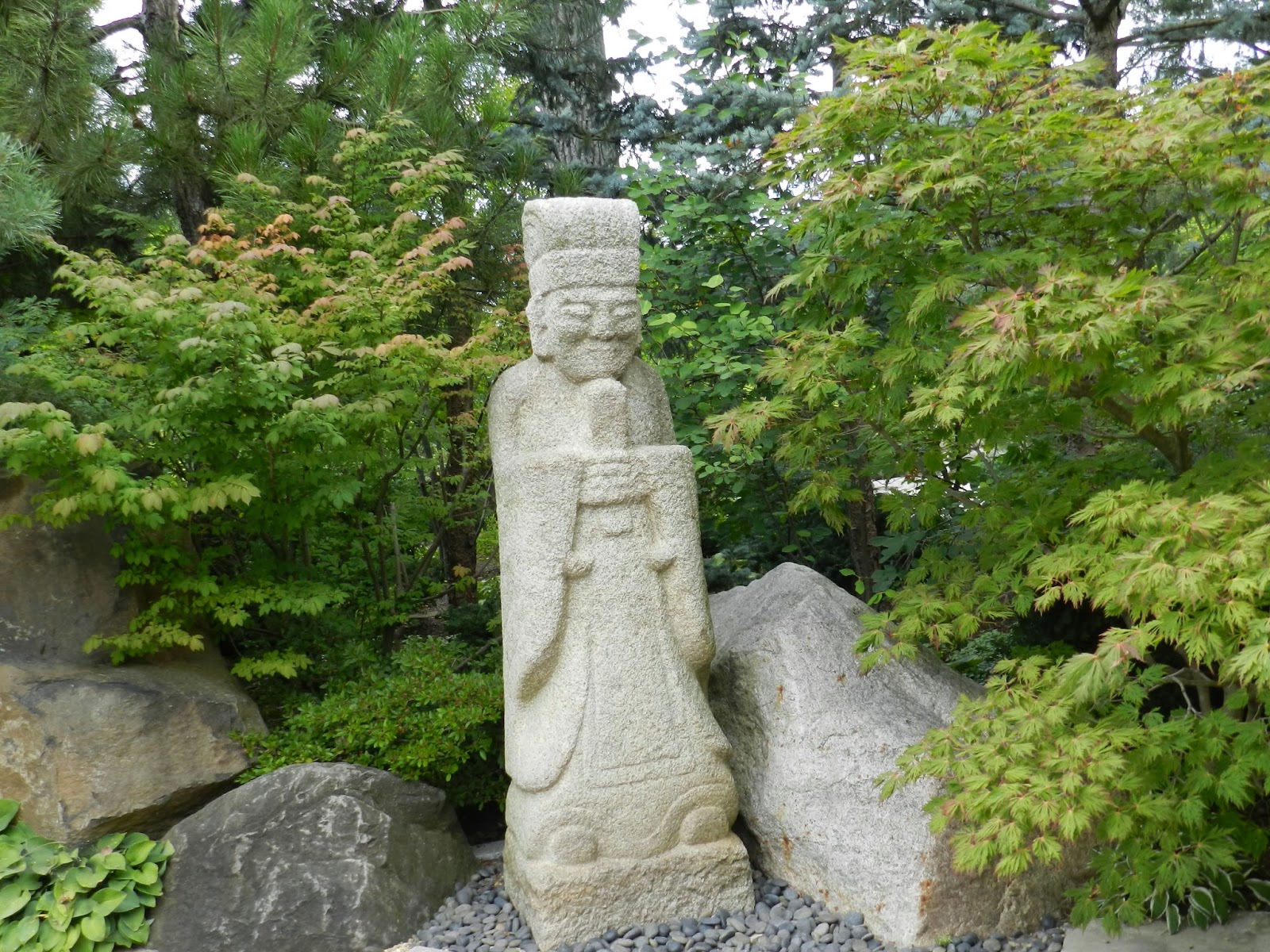 It wasn't long before thoughts of comparison to Portland's garden left my mind, and I focused on the here and now beauty of the Anderson garden.  All the traditional elements of a Japanese garden were here in abundance, such as stone, whether in the natural form or a manmade statue. 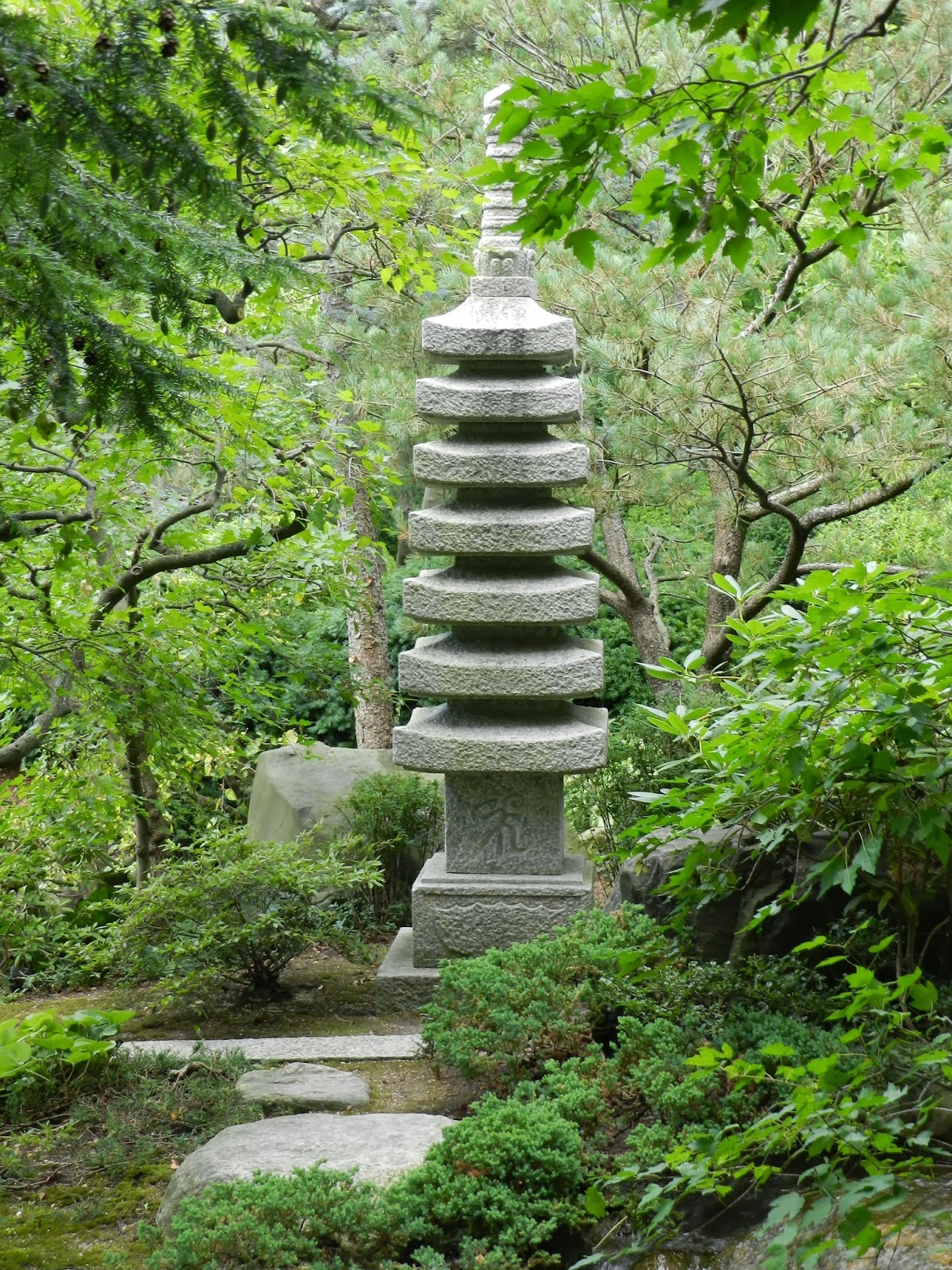 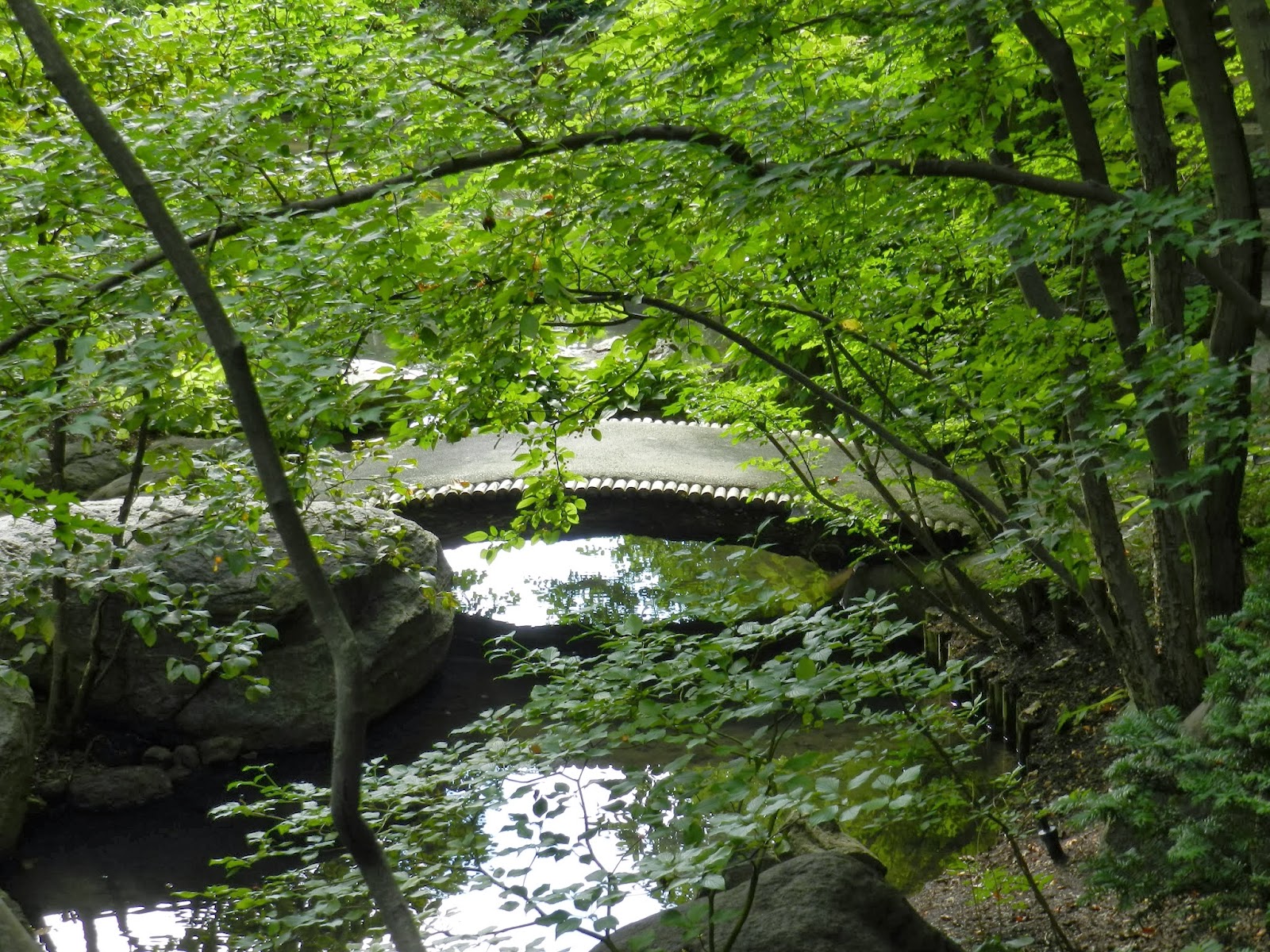 Or a simple, but beautifully built stone bridge. 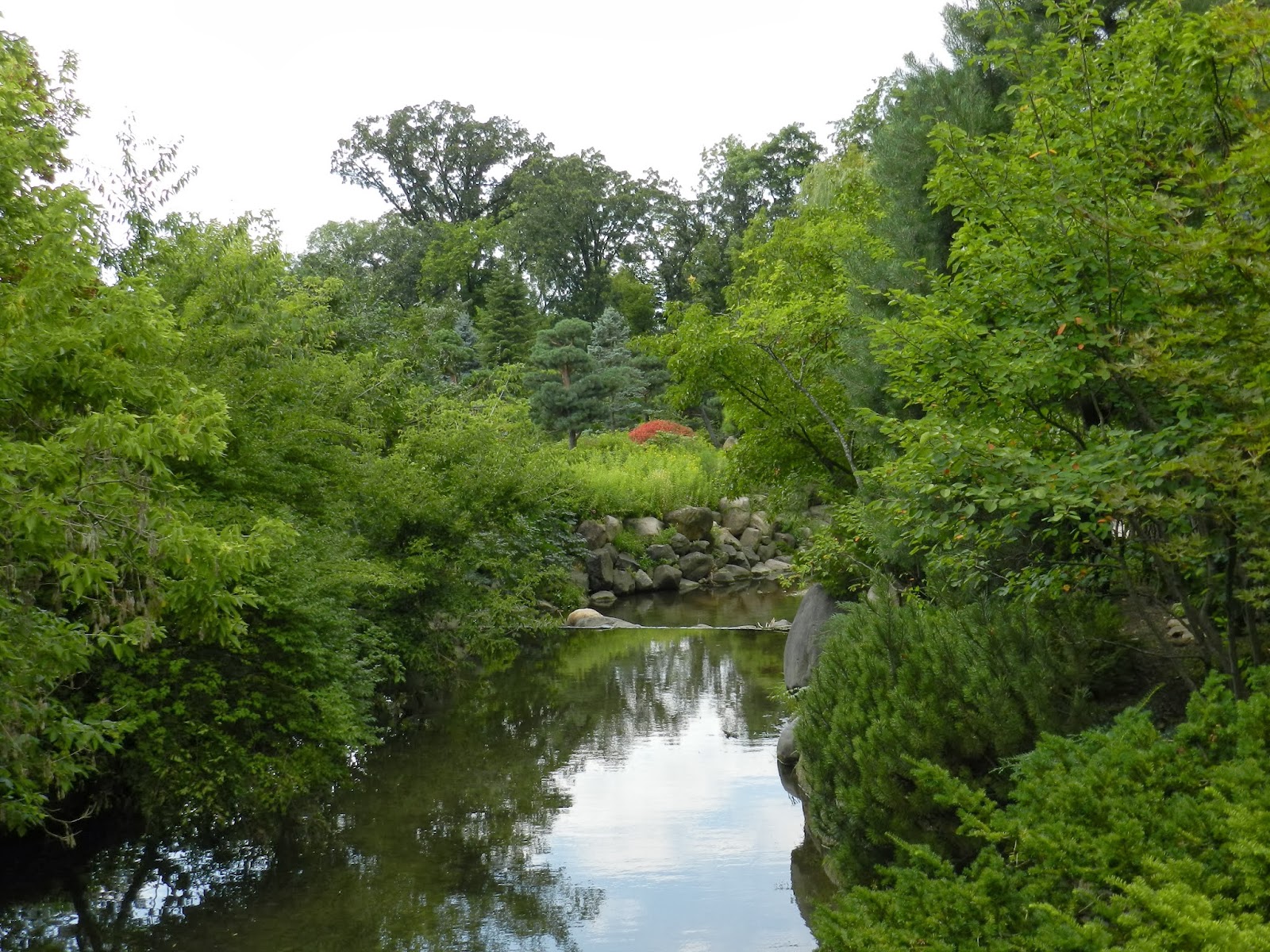 A second element, water, was present everywhere, too, from small streams . . . 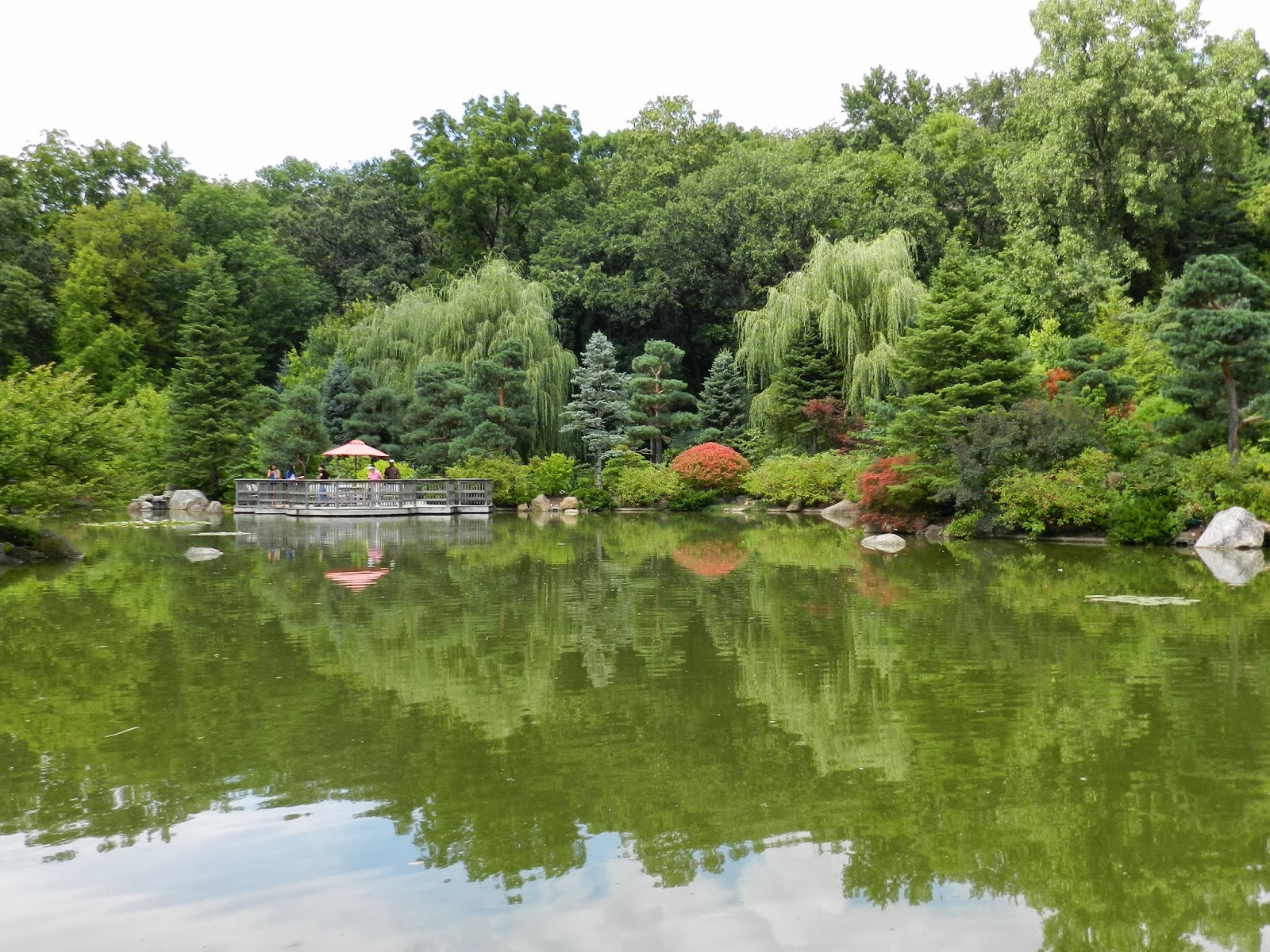 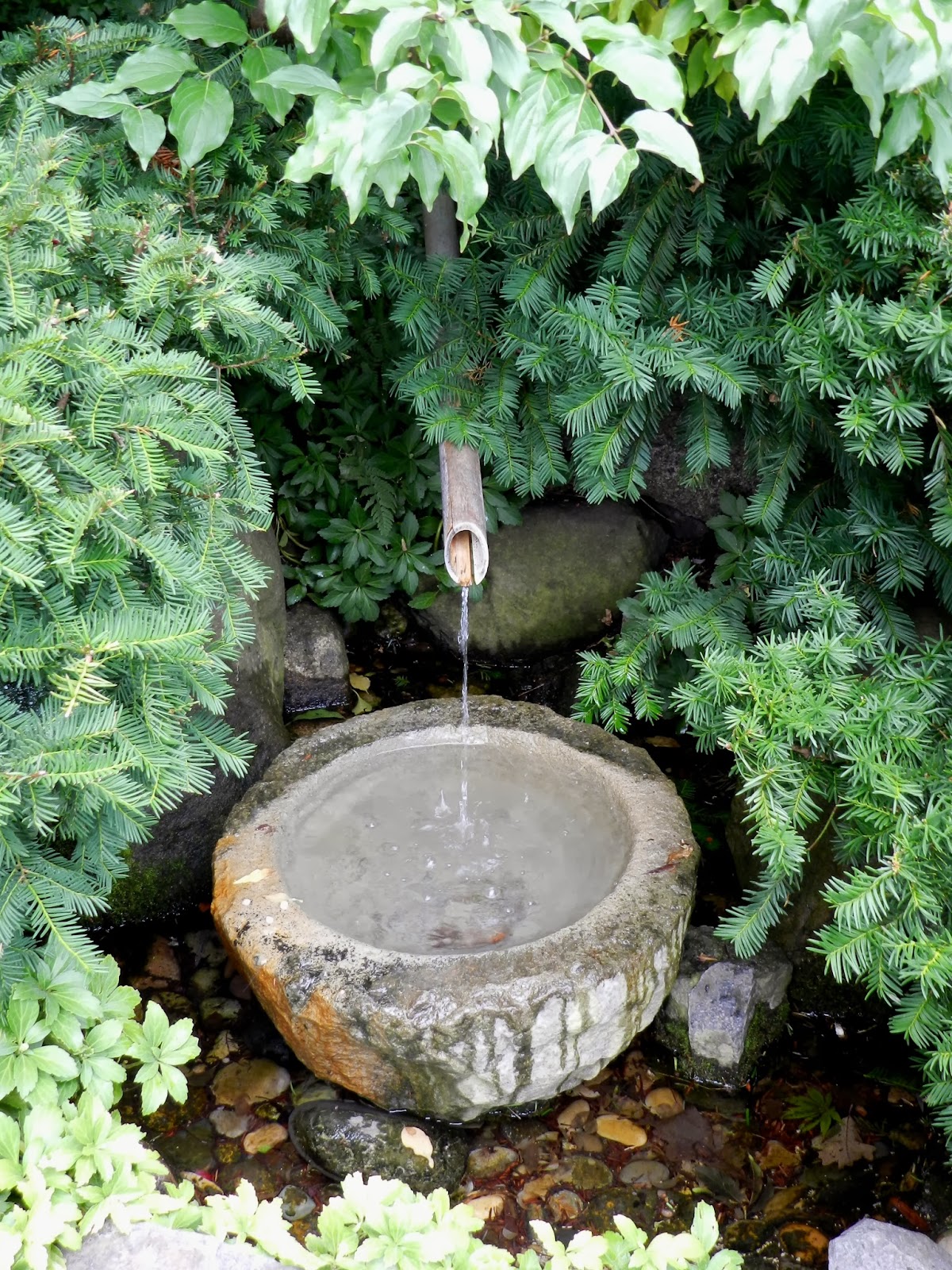 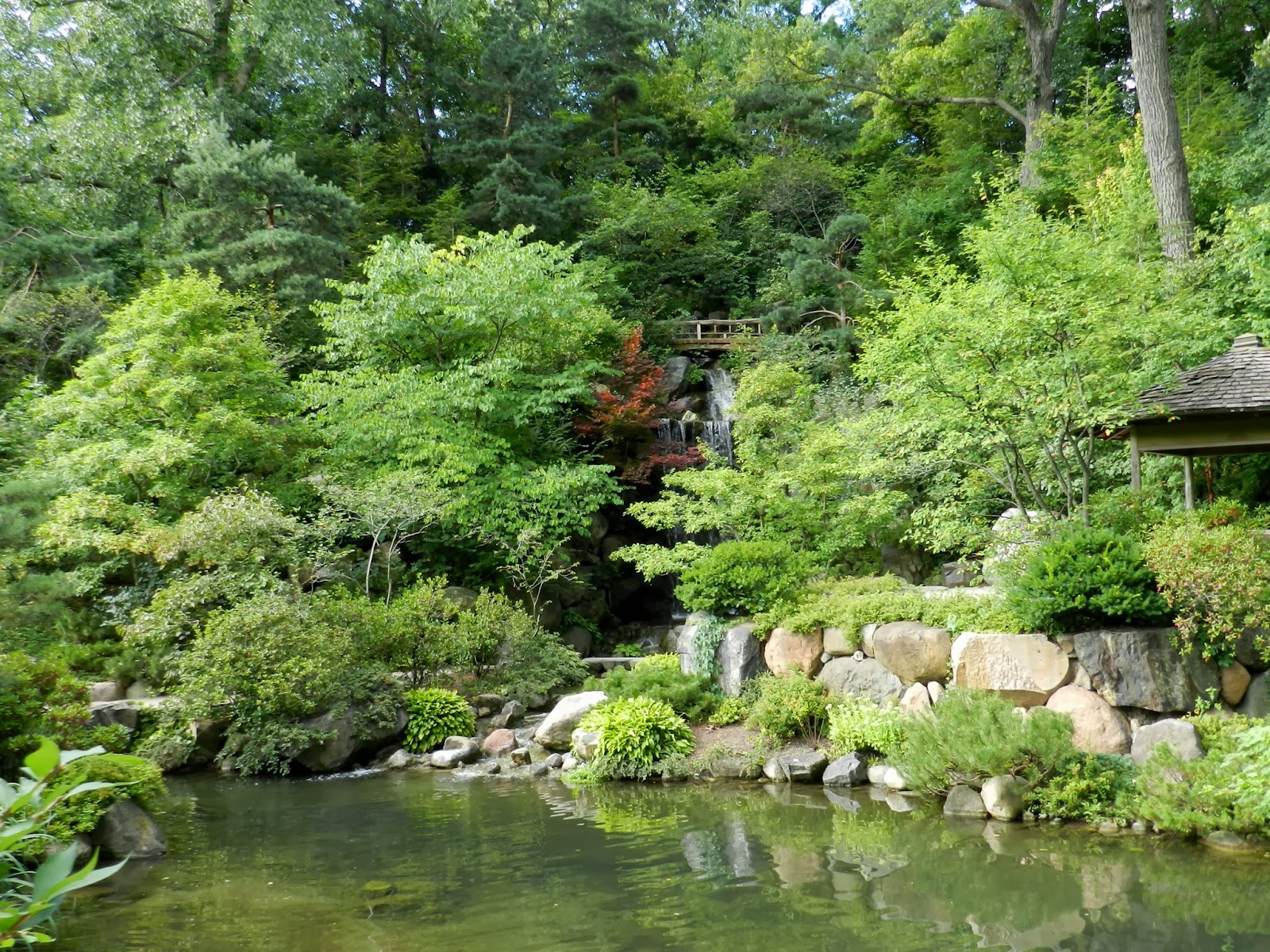 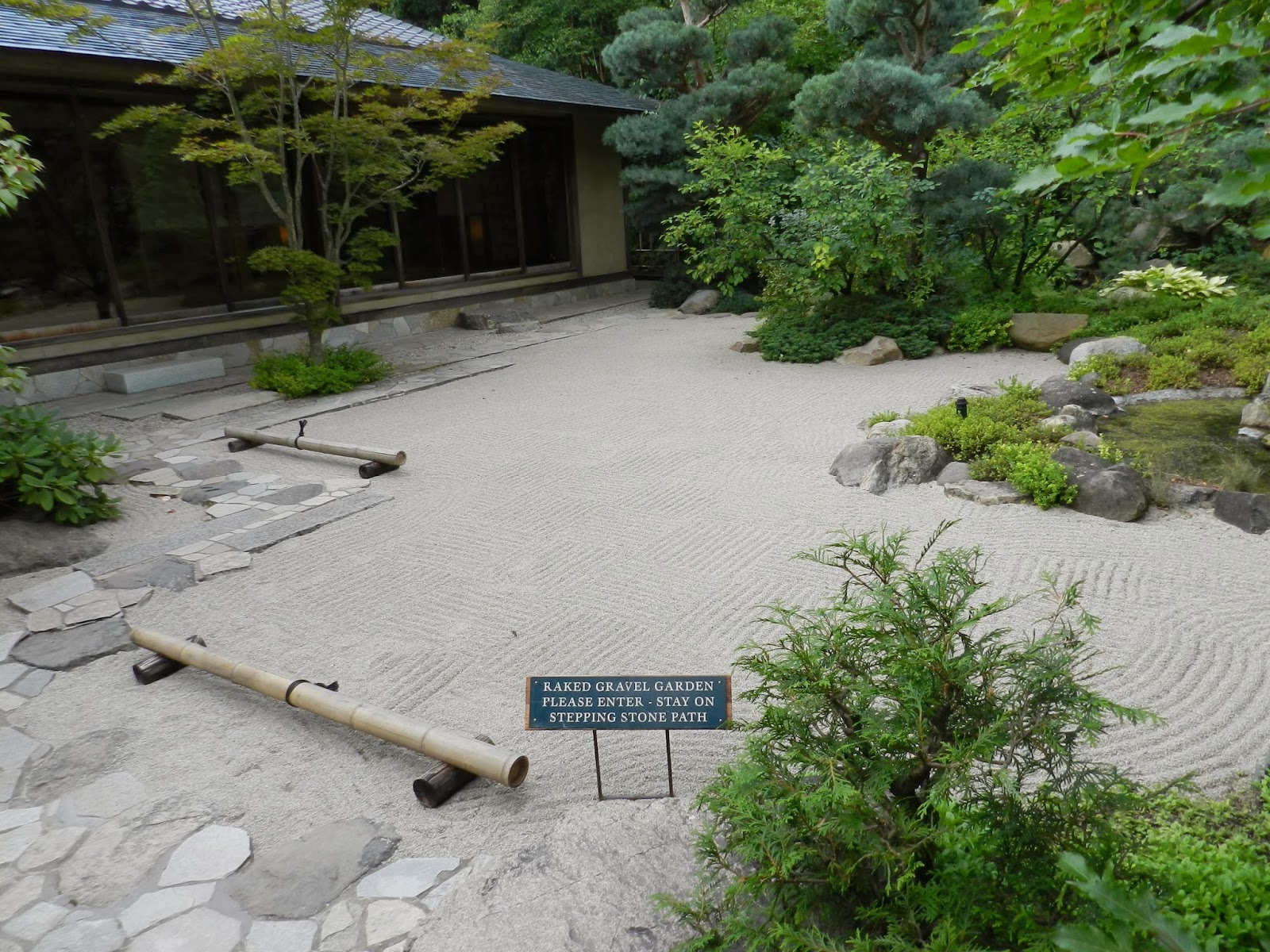 There was also a dry garden, often called a Zen garden by Westerners, for quiet contemplation.  You may not be able to see it in this photo, but the gravel was carefully raked into a checkerboard pattern. 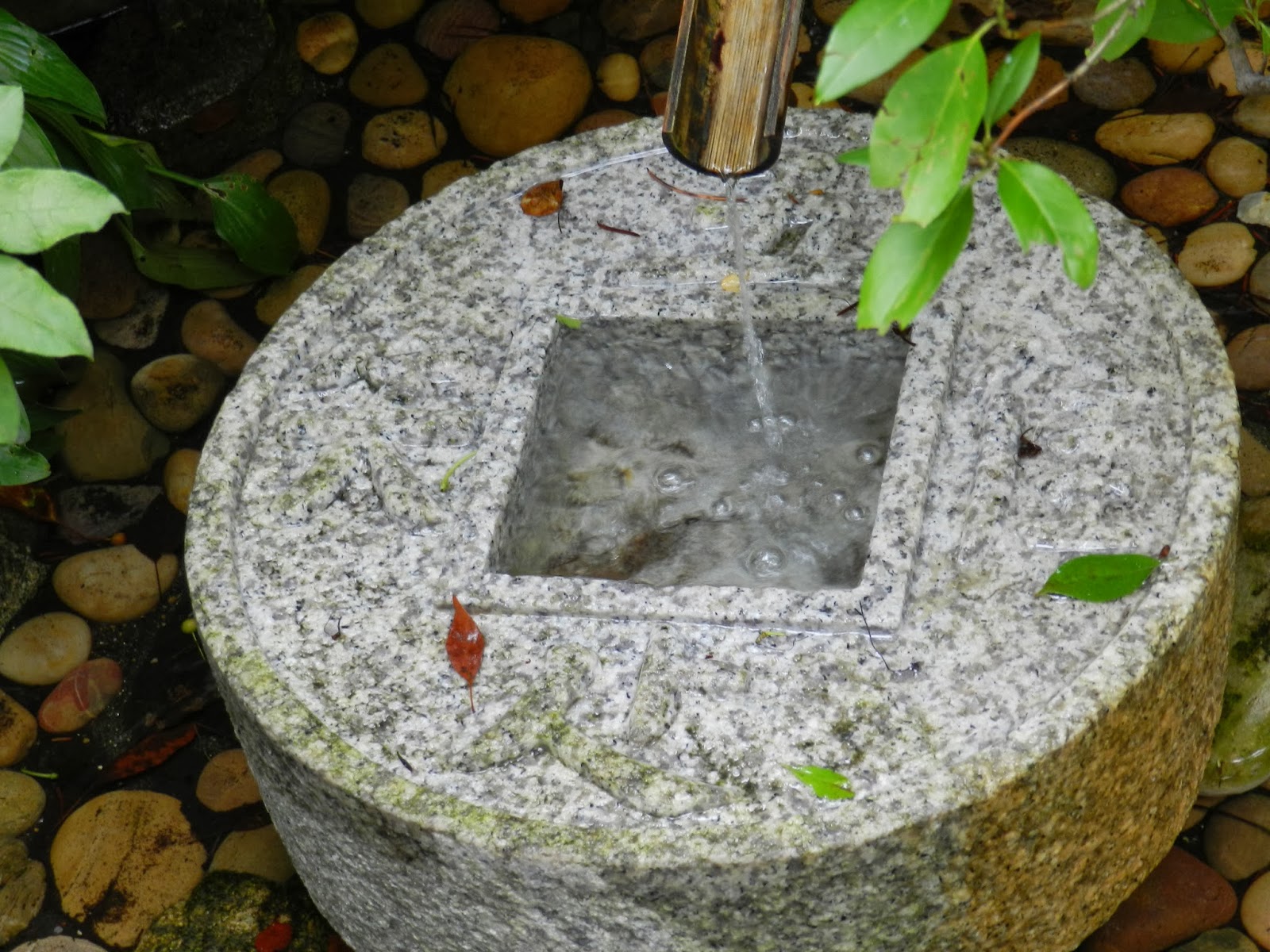 Poetry is an important part of traditional Japanese culture, and it was also found in several spots throughout the garden, including a carved inscription on this water basin. Our handy map/guide, which I have misplaced, helped to translate for us. 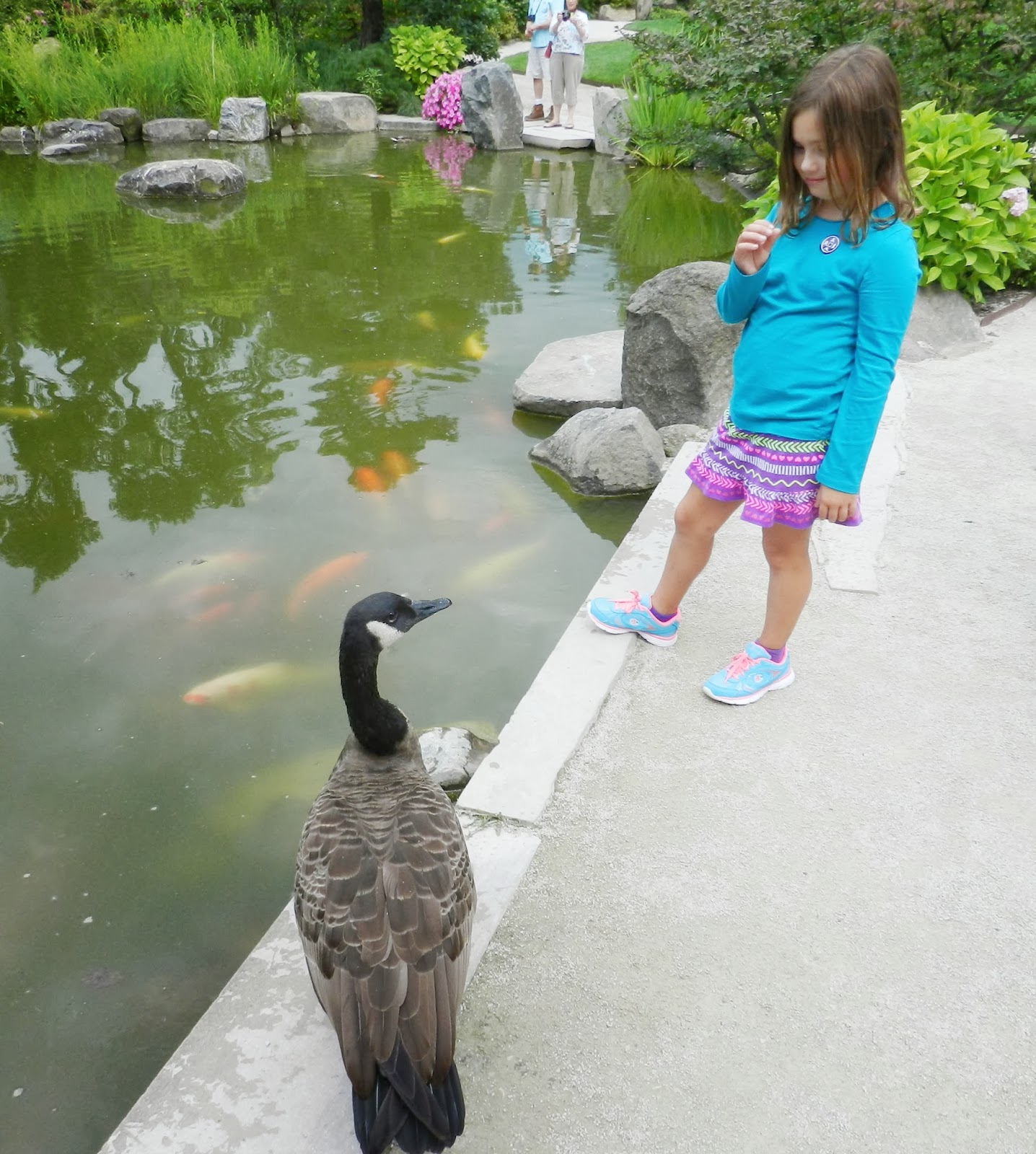 As one might expect, there were large koi in the ponds, but there were some unexpected wildlife as well, such as this friendly--and I suspect well-fed--goose. Ducks scrambling up the cobblestone beach were equally friendly, probably hoping for a handout. 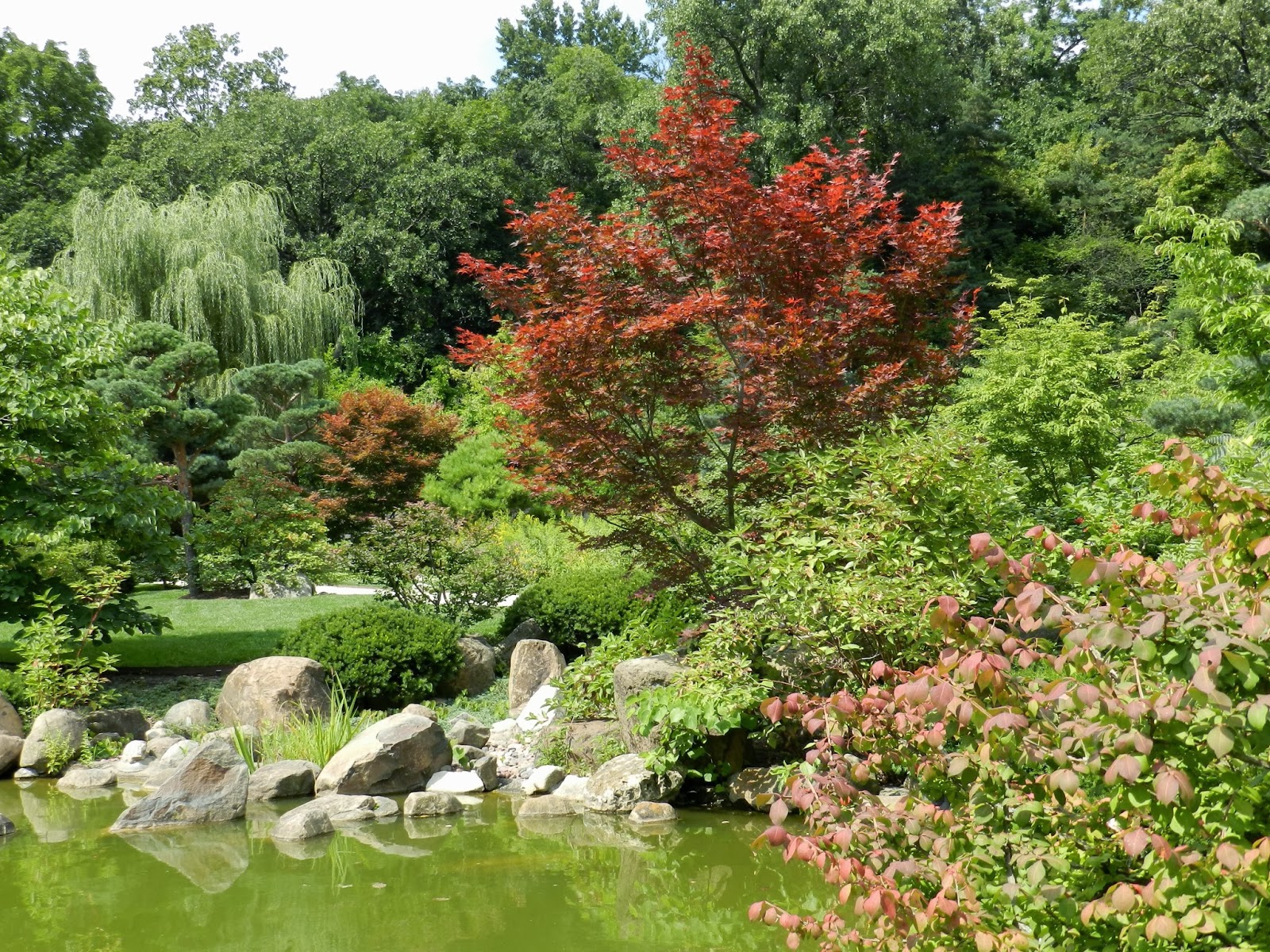 And, of course, there were the plants, the third main element of a Japanese garden. 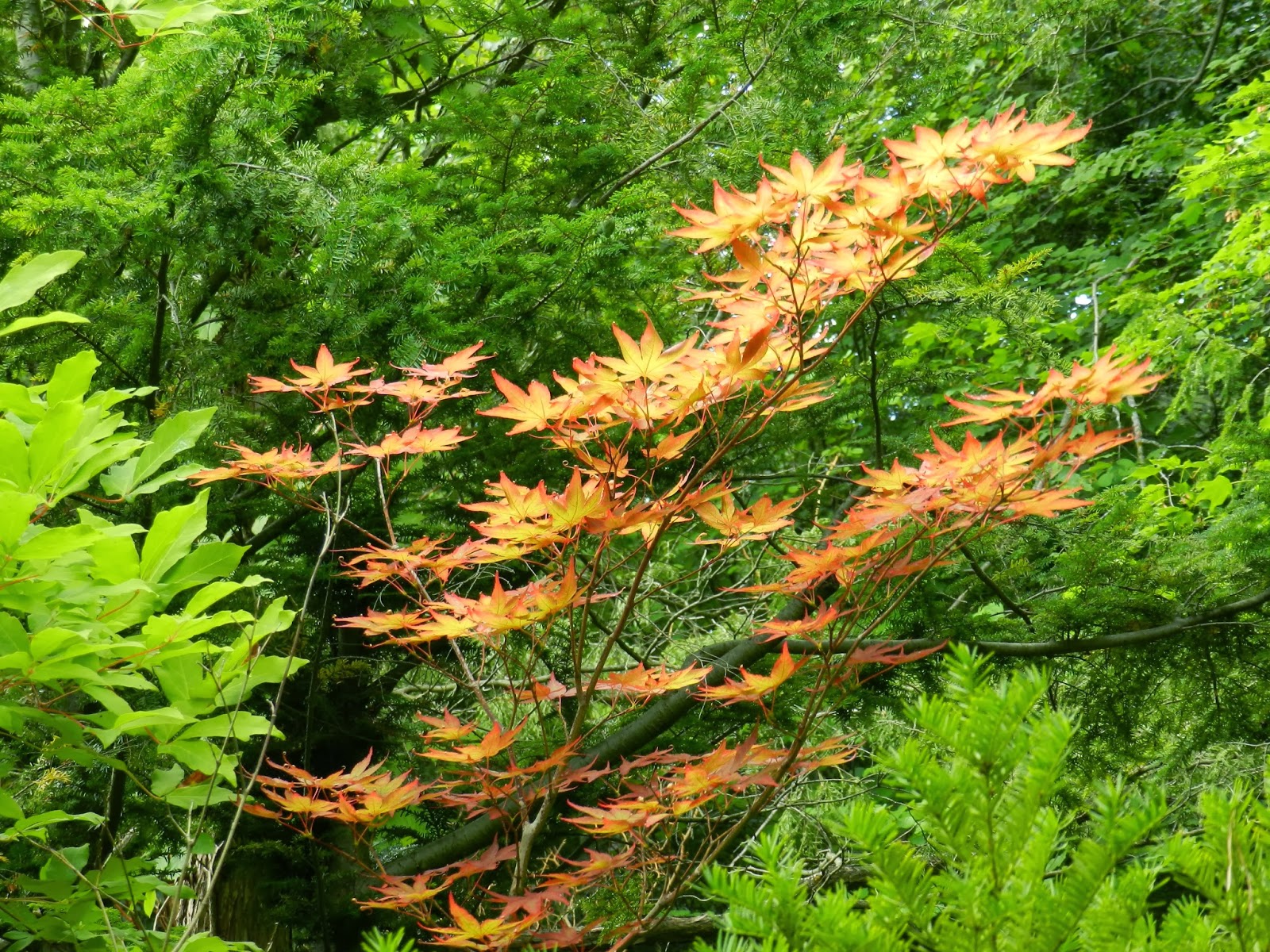 Japanese maples provided a pop of color in what is typically a primarily green landscape. 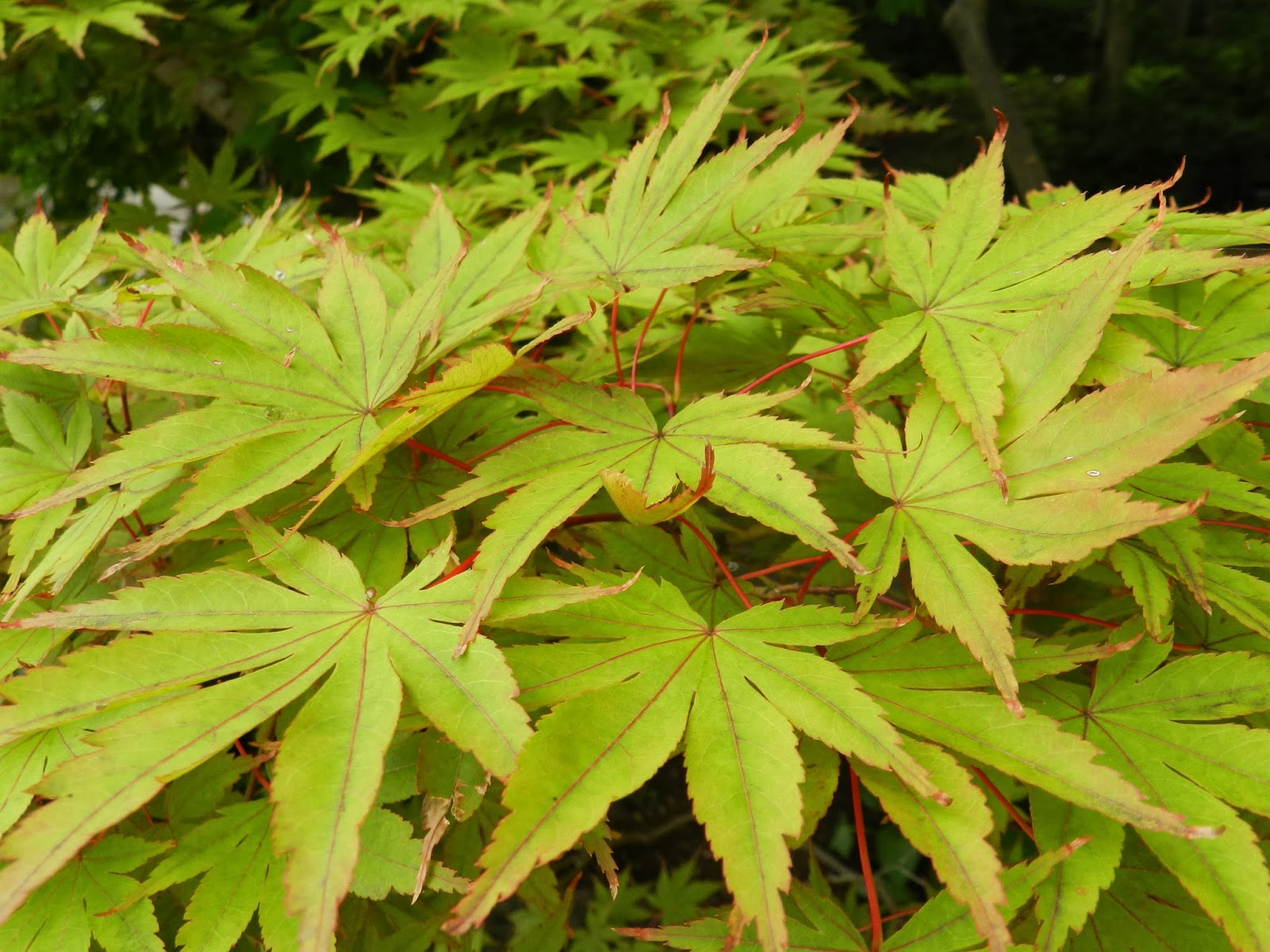 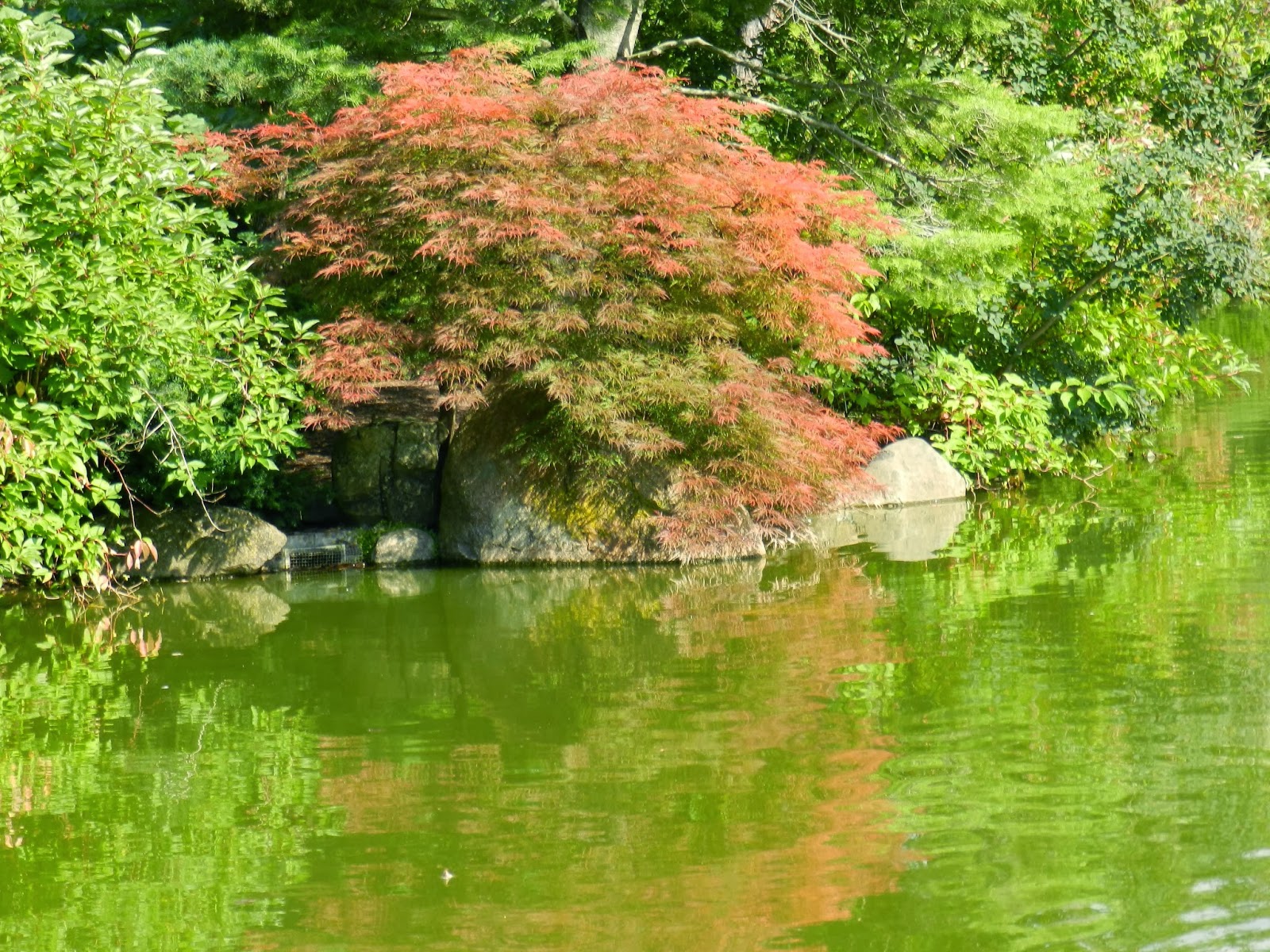 Colorful reflections in the water. 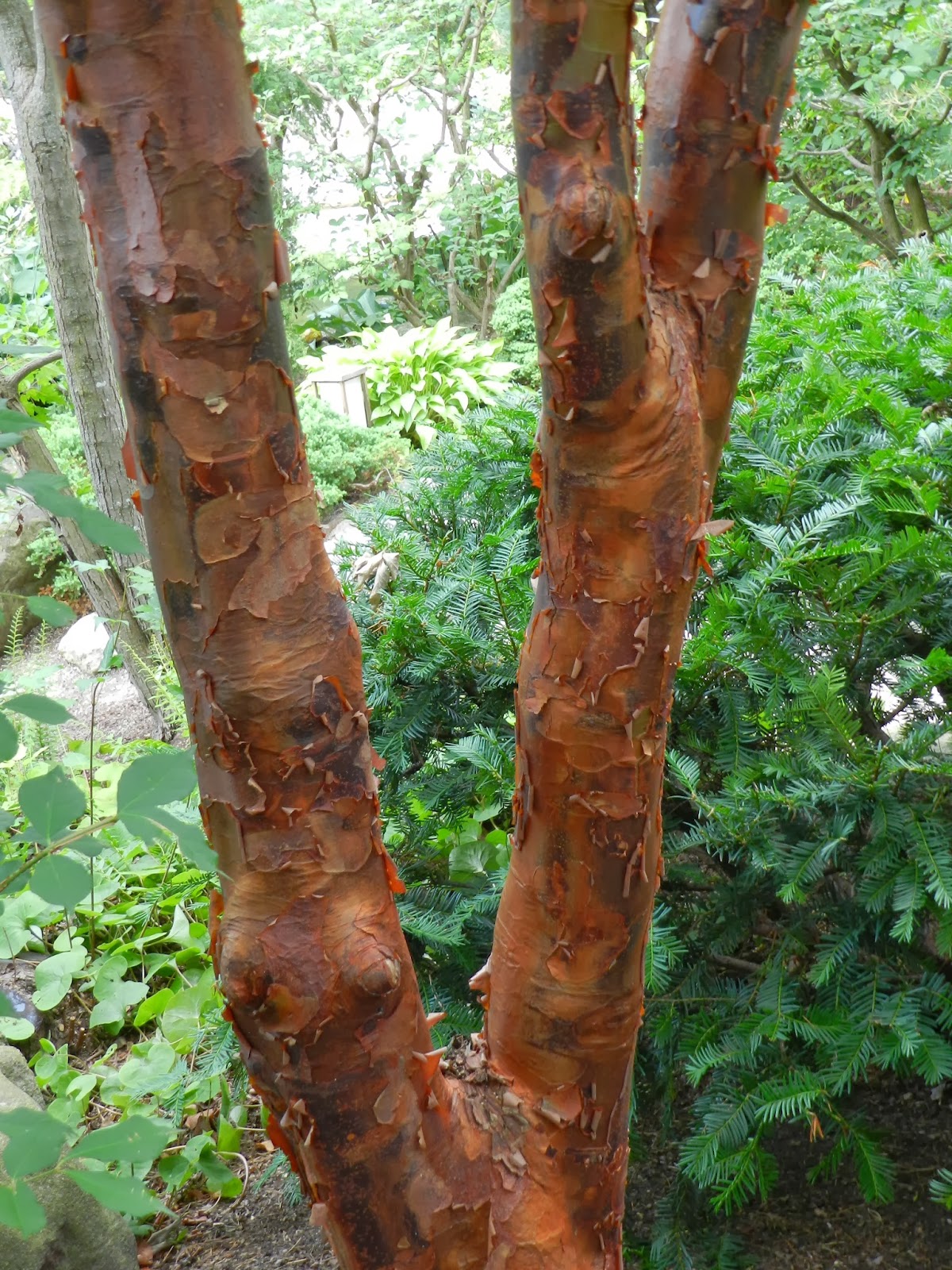 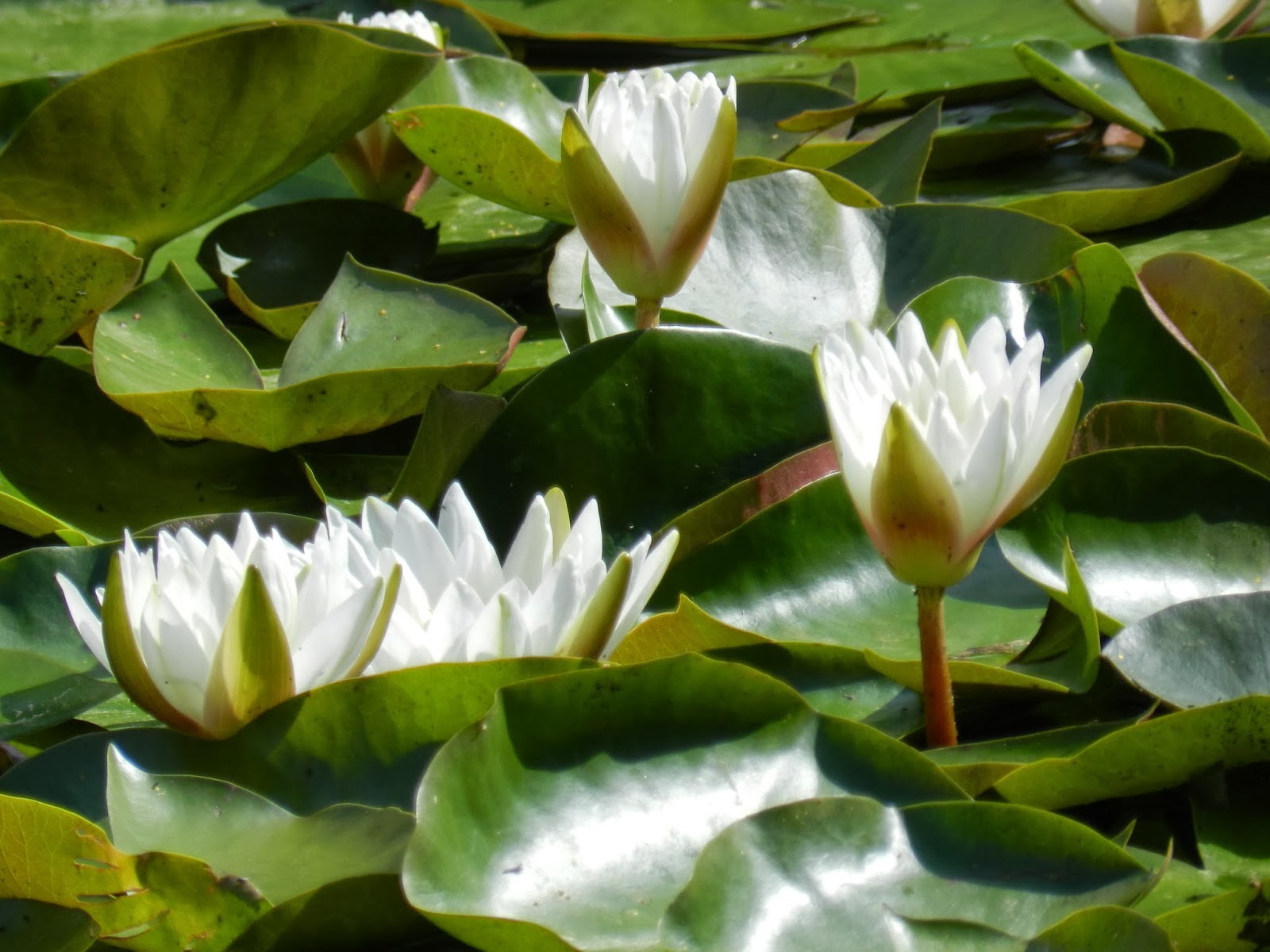 As did the water lilies floating on a pond. 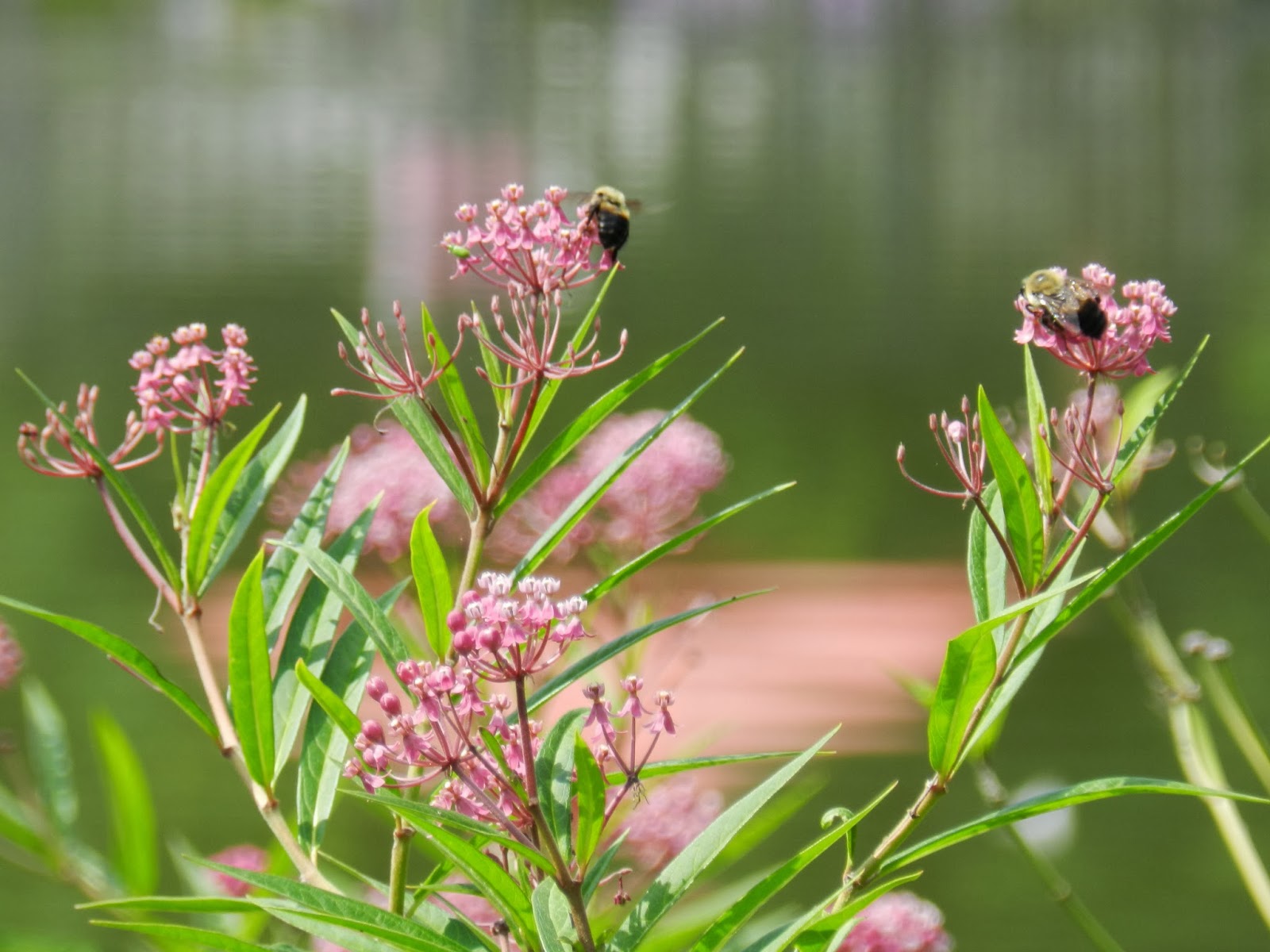 Not everything was traditional in plant choices, however--
a native plant, Swamp milkweed, looked right at home bordering a pond. 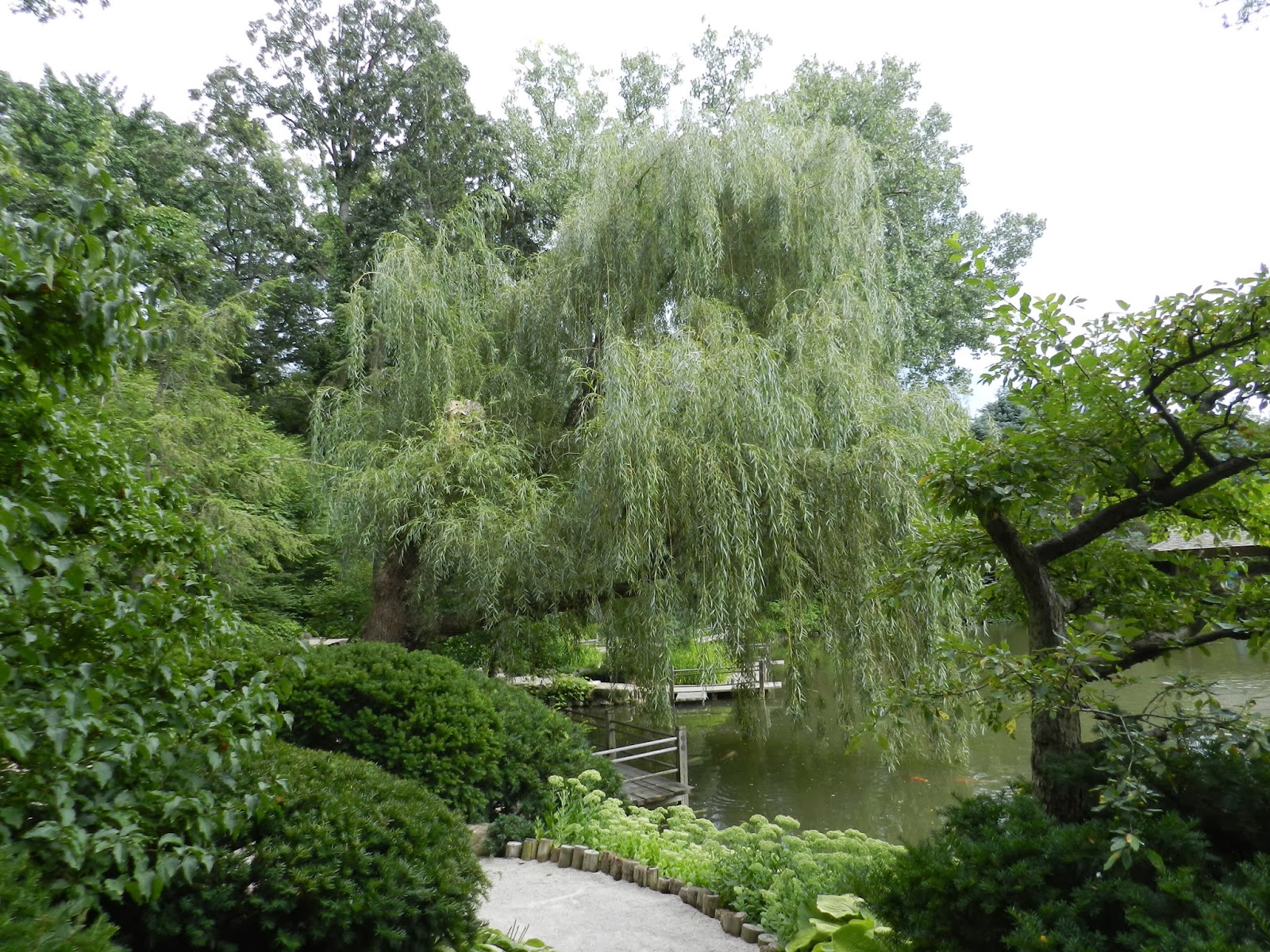 As we followed the paths, I was impressed by the size of the Anderson garden, and no wonder--covering at least 12 acres, it is more than twice the size of the Portland Garden.


What is amazing is that this garden began as a private garden.  Local businessman John Anderson was inspired by the gardens he saw while visiting Japan after graduating from college. When he and his family purchased land in Rockford for a new home in the 70's, he realized the swampy ground below his hillside home had the potential to become his very own Japanese garden and began clearing the acreage. On a business trip to Portland, Oregon in 1978, he visited the acclaimed Japanese garden there.  Not only was he inspired by its beauty and tranquillity, but he asked to meet its designer and soon after asked him to help design his own garden.  Hoichi Kurisu agreed and has been coming to the garden for the past thirty years to work with Mr. Anderson.  (When I read this in the garden's brochure, I had an "Aha" moment--there is a Portland connection here!) 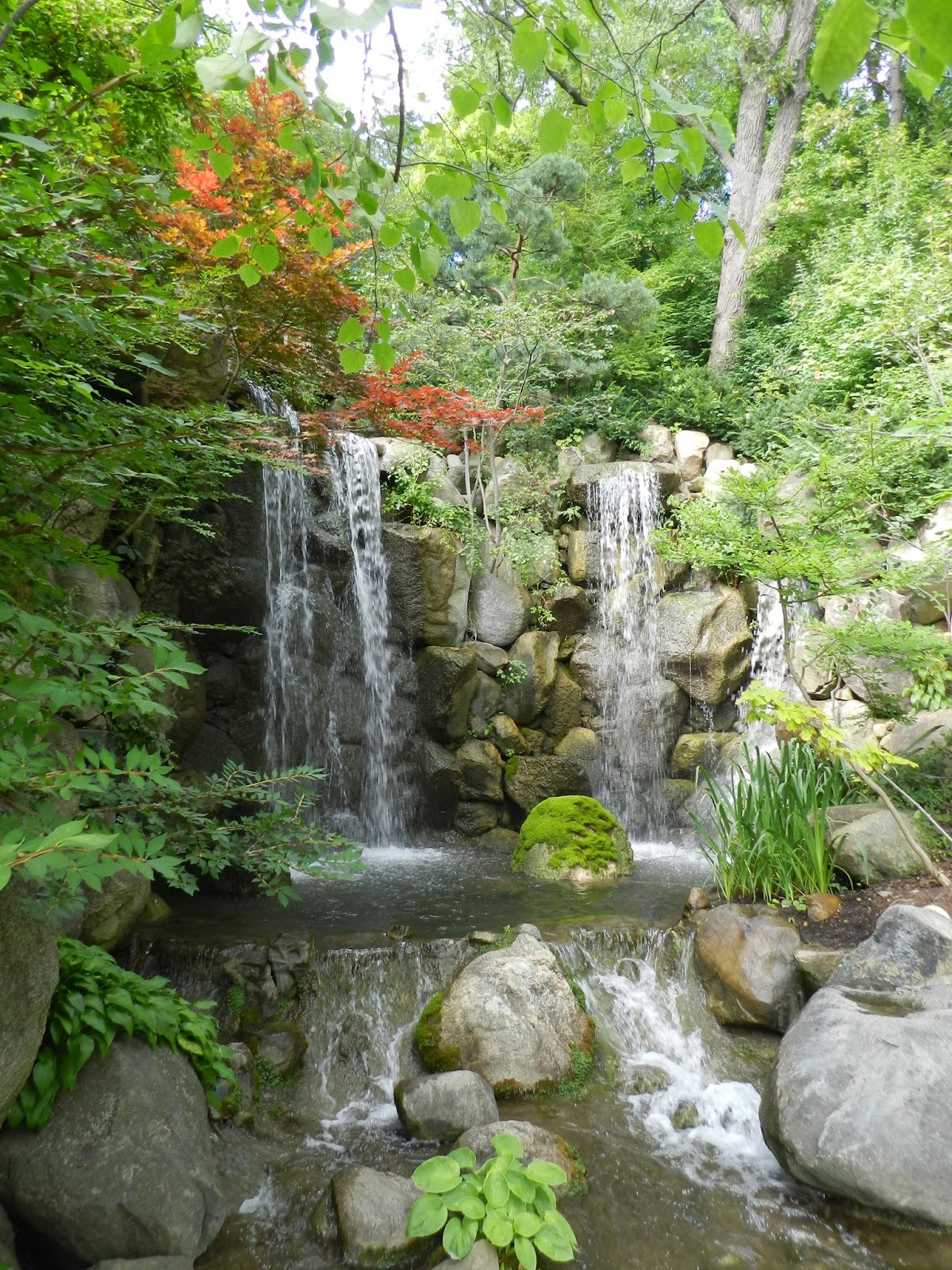 The garden has been open for tours since the early '80's, and in 1998 it became a public, non-profit organization.  My favorite spot in the whole garden was near the end of our visit, this waterfall.  Small paths in front allow visitors to get close, and I scrambled over some slippery rocks for a closer look. 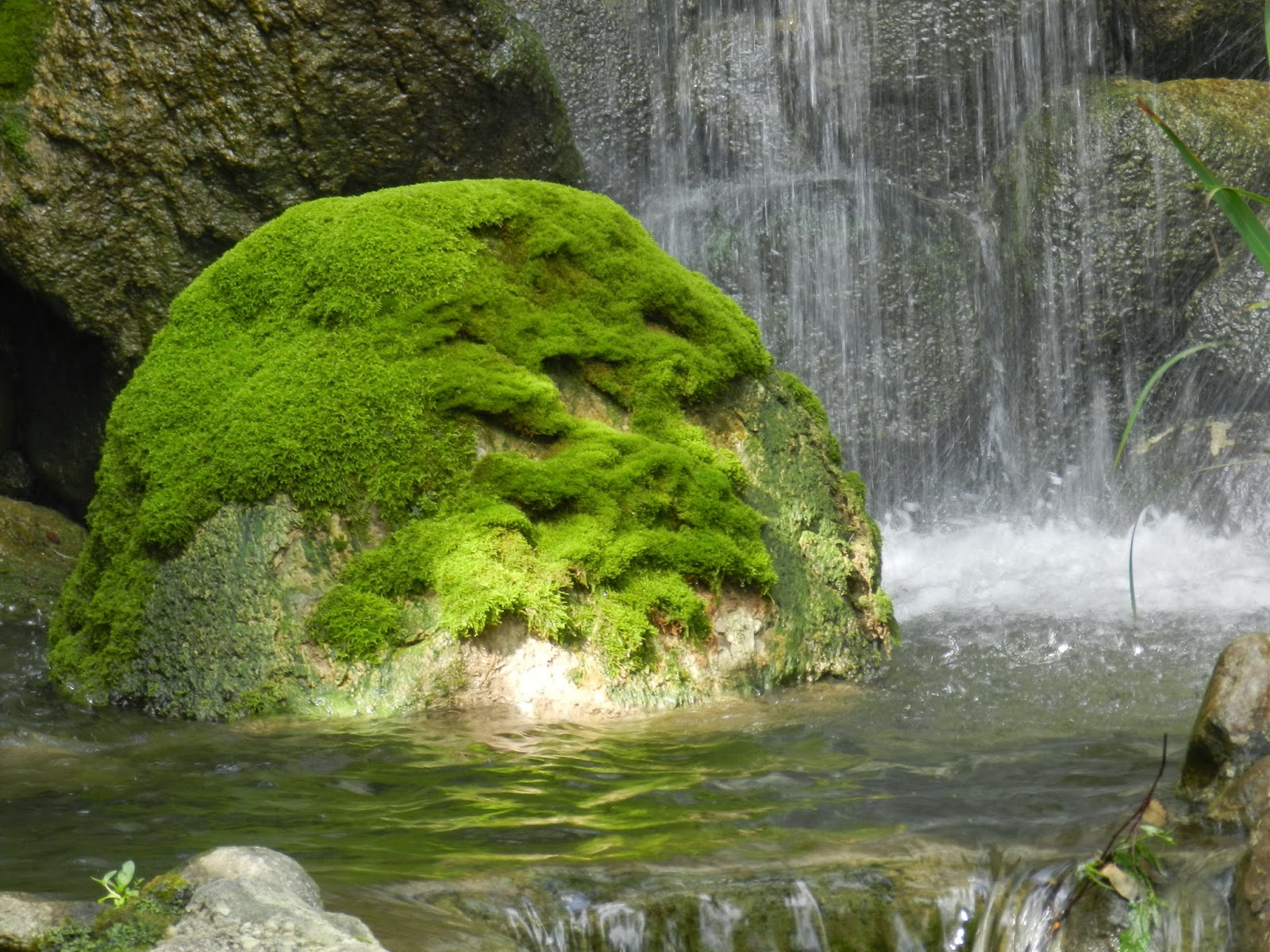 This large stone covered in moss below the waterfall drew my attention, and accompanied by the soothing sound of falling water, I was mesmerized. I don't know what it was about this mossy stone that held me in thrall, nor am I sure how long I stood here because time suddenly stood still.  It truly was a Zen moment for me.

By this time you may wonder what my final opinion is.  Does the Anderson Garden deserve to be ranked above the Portland Garden as the number one Japanese Garden in the U.S.?  Does it really matter?? The Portland garden is shadier because of the tall Douglas firs surrounding it on all sides, and its location on the top of a hill provides some interesting views, including a spectacular view overlooking the city.  The Anderson garden, on the other hand, is larger, and has the advantage of being within much easier traveling distance for me.  But both are beautiful places, providing an oasis of serenity in the middle of a busy city.  If you live in the Midwest, the Anderson Japanese Garden is definitely a destination worth putting on your must-see list.

Since it's snowy and cold outside with nothing to see in my garden right now, it's the perfect time to re-visit some summer photos I didn't have time to post about then. Rockford, Illinois is only an hour or two drive west of Chicago and an hour south of Madison, WI.  There are other attractions worth a visit to this city, too, which I'll highlight in a future post.
Posted by Rose at 5:00 AM