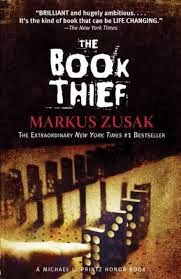 After reading several books this past year that were set, in part, in Nazi Germany, I swore I wouldn't read another book about that time period and the Holocaust for a long, long, time.  Don't get me wrong--I think it is very important to remember what happened during that time so that we never, ever allow it to happen again.  But those events and the blind hatred of Hitler and his followers are just too depressing; I want to read books that provide some escape or lift my spirits.  And yet, what did I read over Christmas break but another book set entirely in Nazi Germany--The Book Thief by Markus Zusak!

The Book Thief is the story of young Liesel who is sent to live with foster parents near Munich.  After witnessing the death of her younger brother and being separated from her mother, Liesel is haunted by nightmares.  The kindness and patience of her foster father, Hans Hubermann, eventually helps her to adjust to her new home, and she settles into a somewhat normal--if there could be such a thing as "normal" in 1939 Germany--life of a 10-year-old, playing soccer with the neighbor kids and getting into mischief with her new best friend, the irrepressible Rudy.

Liesel is fiesty and intelligent, but she doesn't do well in school.  After her brother's hasty burial, Liesel picks up a book dropped by one of the gravediggers and keeps it as a secret treasure, her last tangible connection to her brother.  When Hans discovers it under her pillow during one of his nightly vigils by her bedside, he suggests they read it together to improve Liesel's reading skills.  And so Liesel's discovery of the power of words begins.

This theme of the power of words is reinforced by Zuzak's use of imagery and frequent use of poetic syntax.


"Trust me, though, the words were on their way, and when they arrived, Liesel would hold them in her hands like the clouds, and she would wring them out like rain."

Zusak has an unconventional style; one of the most unusual aspects is that the novel is narrated by Death, who is responsible for giving Liesel the nickname "the book thief."  That may sound morbid, but this is not your typical Grim Reaper.  This figure of Death does not especially enjoy his work and often looks at the color of the sky to avoid looking at the faces of his victims.  When the victims are children, he takes special care and carries their souls tenderly.


"The consequence of this is that I'm always finding humans at their best and worst.  I see their ugly and their beauty, and I wonder how the same thing can be both."

With its subject matter and setting, the book is definitely sad at times, but not as much as one might expect.  Much of this is due to the author's focus on Liesel and her reactions to her environment.  For example:

The Book Thief has been targeted at older teen readers, but it is certainly a book that adults can appreciate as well.  One of my favorite parts of the novel is the story that Max writes for Liesel, "The Word Shaker."  Its message is powerful and full of hope:  that one day the seeds sown by friendship will grow strong enough to overpower the seeds sown by hatred.


Disclaimer: No compensation of any kind was received for this review. As always, I review only books I enjoy and think others would enjoy reading too. After downloading a sample of The Book Thief on my Kindle, I was hooked and checked out the book from my local library.
Posted by Rose at 7:00 AM