Why I Don't Have Houseplants

Gardening trends come and go, and I don't usually pay much attention to them--my garden is never going to be featured in a magazine, that's for sure.  But one popular trend in gardening that has piqued my interest lately is fairy gardening, especially after seeing so many delightful miniature landscapes in various gardens this past year.  I had finally decided on the perfect place to create a home for the pixies in my own garden, so when my friend Beckie asked me to go with her to a workshop on fairy gardening at a local garden center this fall, I eagerly agreed.

The workshop was mainly focused on creating an indoor fairy garden, but the best part was the 30% off coupon all of the particpants received. I bought a few accessories that struck my fancy, but passed on the bottle of fairy dust--a tiny plastic jar of glitter selling for $3.00 (!).  I was going to put them away until spring, but that coupon was still burning a hole in my pocket, and I thought what the heck--an indoor fairy garden would be something fun for the winter, so I bought an inexpensive shallow pot and several small indoor plants.

My granddaughter came over one day, and together we planted the fairy garden; I let her choose where to place the curved path and bench, and she even managed to squeeze in the curved bridge.  The end result wasn't anything spectacular, especially since it had neither a fairy or a house, but we had fun nonetheless.


When the weather began to turn cooler, I brought the little garden inside, finding a temporary home for it near the patio doors.  Not a good idea as it turned out: one morning I noticed that some kind of freak storm had hit the fairy garden and uprooted several plants.  I pushed them gently back into the soil, hoping they would recover, and began to wonder about this strange meteorological occurrence. Another result of climate change, perhaps?

Oddly enough, the same storm hit several more times over the course of the next week until one morning I found the garden upturned, with most of the soil on my carpet, the bridge upended, and most of the plants past rescuing. 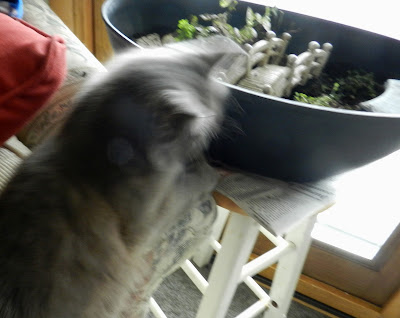 I had begun to form a plausible hypothesis, and sure enough, my suspicions were confirmed one day when I noticed a streak of gray out of the corner of my eye. 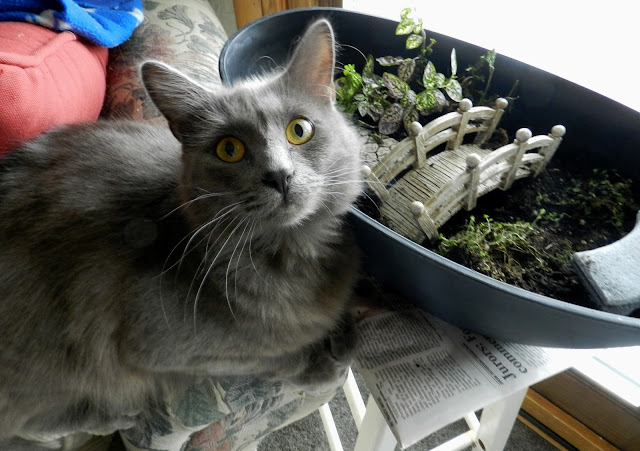 Don't let this innocent face fool you.  The evidence was overwhelming: pawprints were taken, and sure enough, traces of potting soil were found. The mess was cleaned up, but I guess the fairies will have to wait until spring for a new home that will be safe from Storm Widget!

And that, my friends, is why I don't have houseplants.