Everyone I know seems to have gone on a vacation lately.  One good friend spent a week in Florida, while another friend, my Tai Chi/lunch buddy, spent last week lounging on the beach in the Bahamas.  And Daughter and her husband just came back from a week in paradise, i.e., Hawaii.  As for me, a couple of trips to the grocery store were the highlights of my week:)

Yes, I admit to being just a wee bit jealous.  Usually I get to travel somewhere between the end of January and mid-March, but not this year. Mr. P and I had tentatively planned to visit Daughter and Son-in-Law this March as we often do, taking in some Cubs' spring training games and soaking up some Arizona sun.  But it was not meant to be.  Just before Christmas, Daughter received a promotion and was being transferred. By mid-January they had packed their belongings and headed--with the two granddogs in the car--to Houston, Texas. Since the move, Daughter has been so busy settling in and traveling for her new job that a visit from us just didn't make sense this spring. 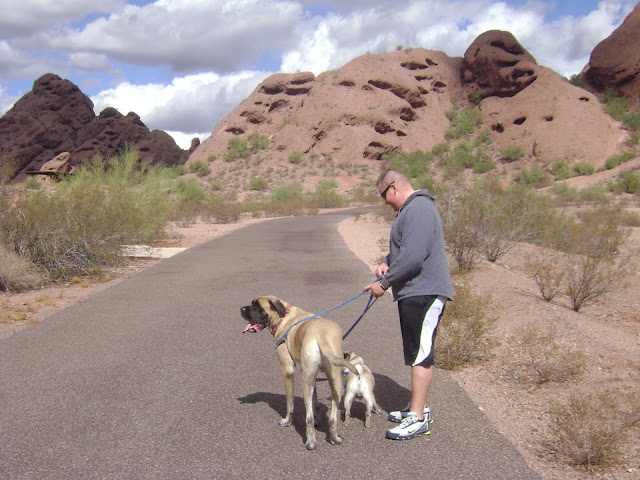 Looking back, I am so glad now that I made the decision to visit Daughter and Son-in-law back in November.  It gave me a  chance to spend some time with them, especially since I hadn't seen them since their wedding reception last June, and to meet my new granddog Eddie. 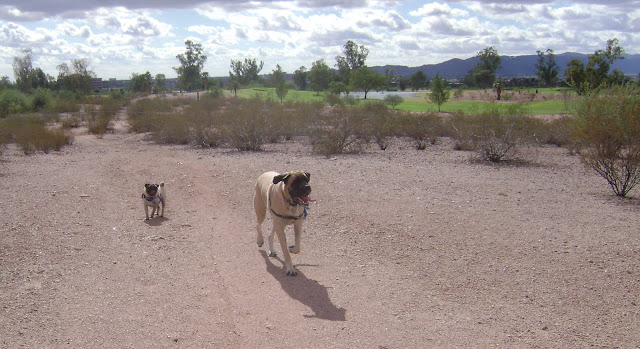 That's Ed trailing behind his big brother Bear after a hike through Papago Park on the southern edge of Phoenix.  Ed is a much livelier pug compared to the late Odie, who was more laid-back.   Both Ed and Bear have lived all their lives in Arizona, so they're used to the heat, but I'm not sure how they will adjust to Houston's much more humid climate. 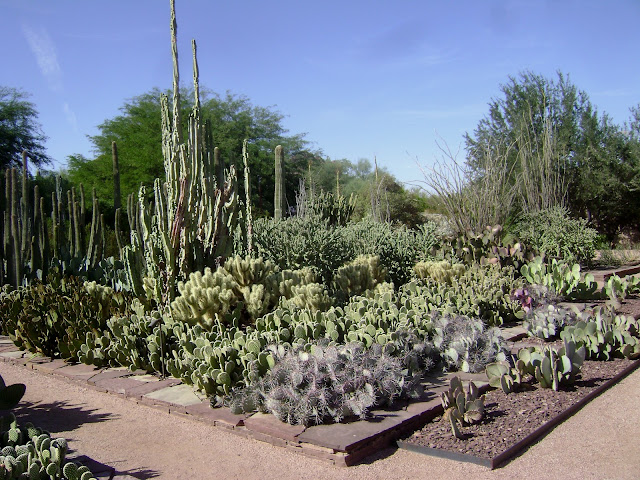 A trip to Arizona is never complete, of course, without a visit to the Desert Botanical Garden in Phoenix. Having toured the garden on every visit to Daughter over the past four years, it's become a familiar place to me--I know where to find the Butterfly Pavilion, the Wildflower Trail, and, of course, the gift shop without any guidance.  I remember my first trip here: the desert flora seemed like alien life forms to me.  But my tours of the DBG have helped me to understand much more about the environment of the Sonoran Desert and to recognize many of the plants. 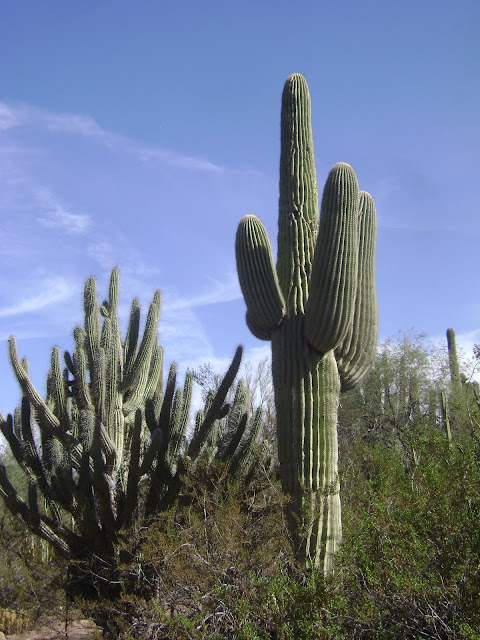 Thanks to the DBG, I can now distinguish between the iconic Saguaro . . . 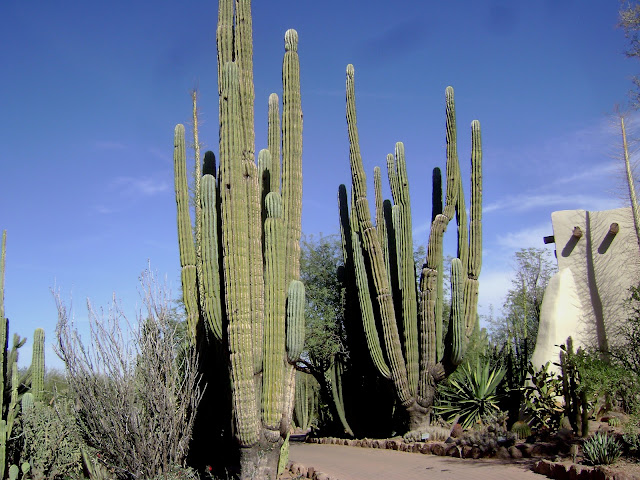 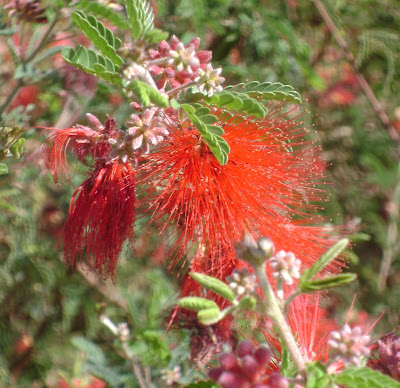 Nor do I need a tag to identify the lovely Baja Fairy Duster, which always seems to be in bloom no matter the time of year I visit. 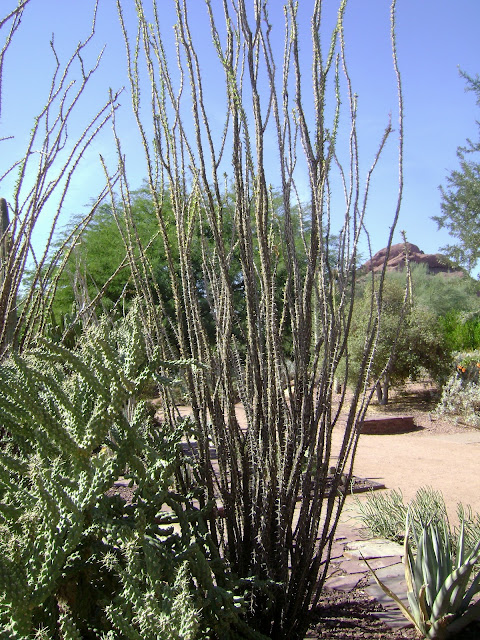 Still, there is always something new to be learned; this time I was on a mission to find the name of some plants growing in Daughter's backyard.  It didn't take me long to find several specimens of the plant, an Ocotillo, a cactus indigenous to the Sonoran desert and commonly seen from California to western Texas. It's a deciduous cactus, so it wasn't particularly attractive during this November visit, but later research informed me that in spring it produces beautiful red blooms that are especially attractive to hummingbirds. 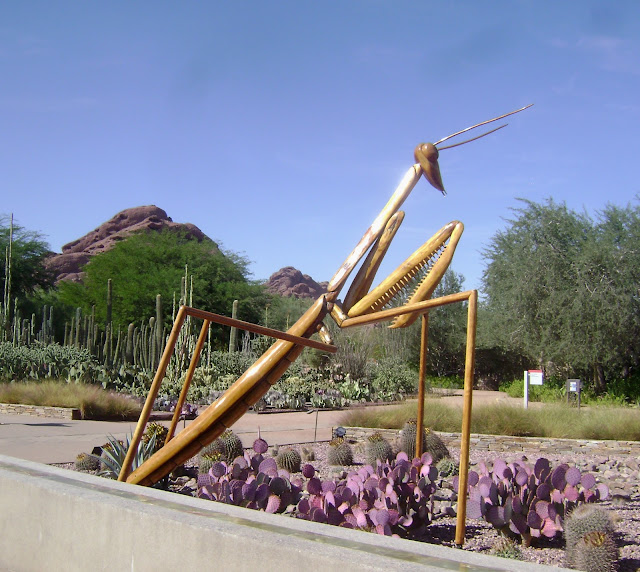 Plant specimens may be the main attraction at the Desert Botanical Garden, but they're not the only interesting things to see. I knew something was up when I walked in the entrance and saw this huge praying mantis standing guard. The Garden often hosts art exhibits, particularly sculptures on display throughout the garden.  My favorite from the past was "The Nature of Glass," an exhibit during the winter of  '08-09 which featured the works of  Dale Chihuly,  which you can read about here, if you wish.
. This time the Garden was hosting the exhibit "Big Bugs," a collection of larger than life insects crafted from all natural materials. 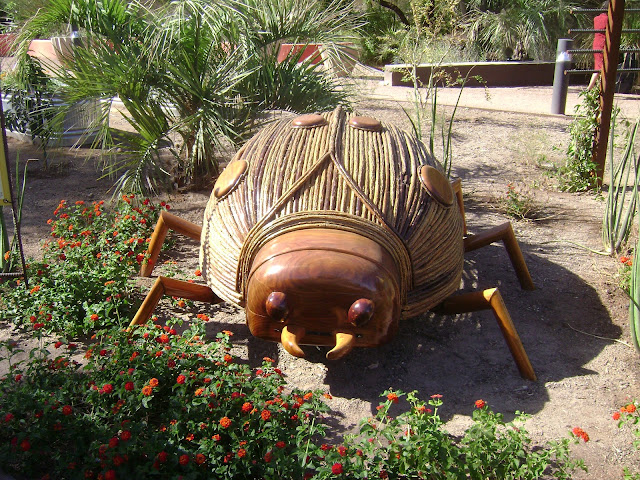 This lady beetle, for example, was made primarily from bent willow with black walnut used for its head and spots.  A mere 150 pounds, it wasn't quite as imposing as the mantis in the earlier photo which was 17 feet tall and weighed in at 1,200 pounds! 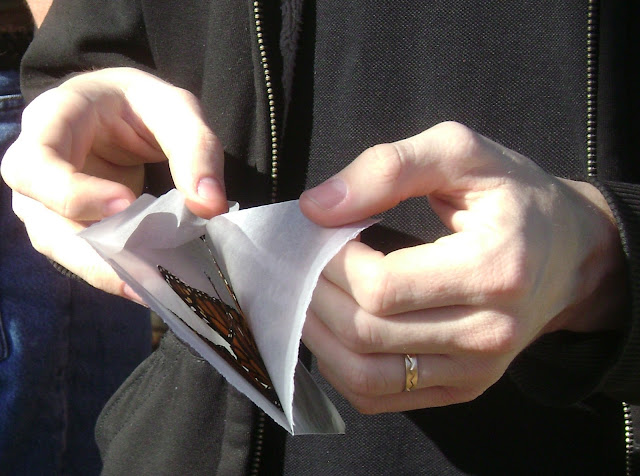 One of my favorite areas to visit within the garden is the Butterfly Pavilion.  Usually, it doesn't open until March, but I was lucky this time--a guide informed me that the Pavilion would be open because a shipment of Monarchs had just arrived.  The butterflies are flown in from a supplier in Florida, encased in waxed-paper-like envelopes kept at a cool temperature.  I arrived just in time to be handed a paper envelope, along with other eager participants.  We opened the envelopes carefully . . . 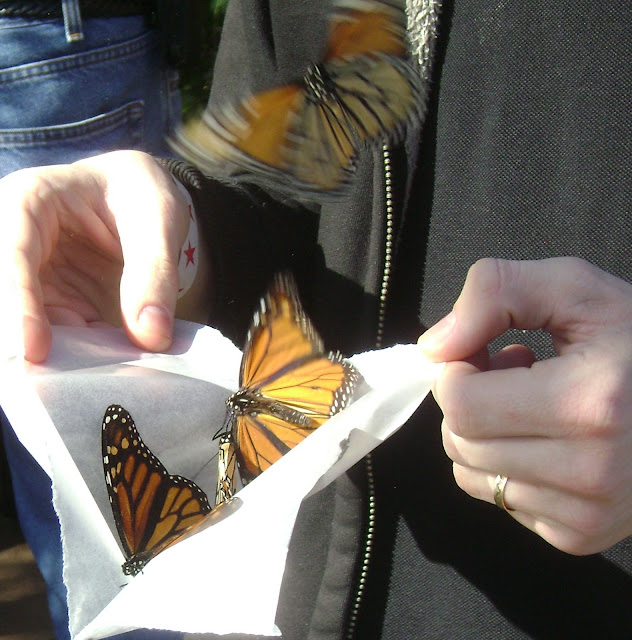 Once the butterflies felt the warm air, they revived and made their escape! 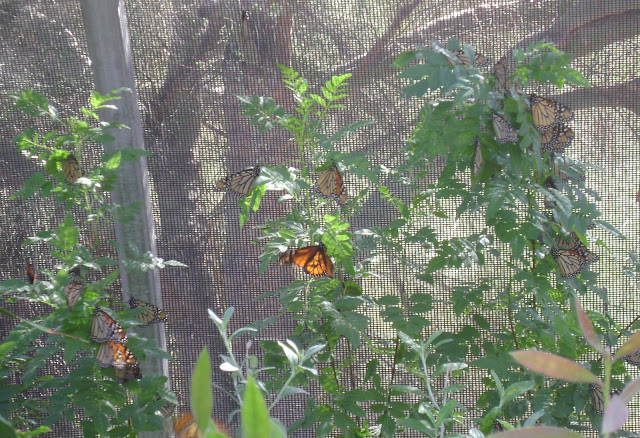 It was truly a breathtaking sight to see dozens of them flying about. 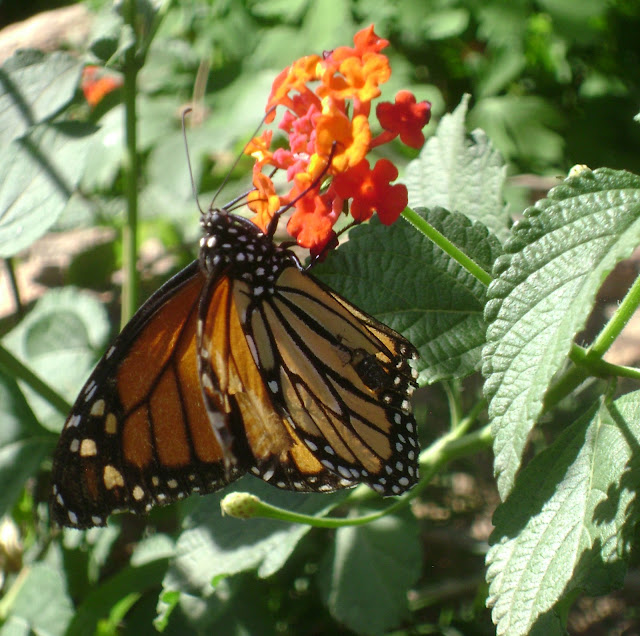 Eventually, they found plenty of bright blossoms to provide some nourishment after their long trip. 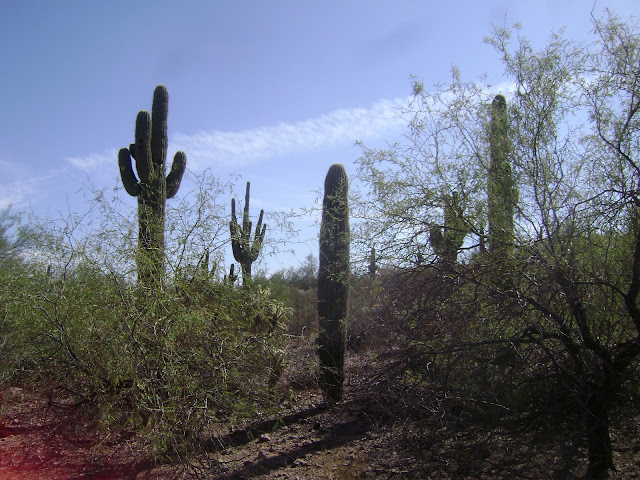 Cacti, art, butterflies--the Desert Botanical Garden is the perfect place to spend a delightful morning in Phoenix.  Little did I know at the time that this might very well have been my last visit there, so I'm glad I had the chance to see it again.  I'll miss visiting Arizona every year, but I'm sure Houston, Texas must have some interesting gardens as well--I'm already looking forward to discovering new places to see next fall!