At the age of 60, Maggie Fortenberry feels that the best of her life is now behind her, and even that had been disappointing, so she decides to "leave life a little earlier than expected."  Most people who know her will be shocked, she realizes, and some may think she is taking the cowardly way out.   Yet, Maggie has given this much thought and carefully weighed the pros and cons, going so far as making a list of both sides before making what she believes is the only right decision.

"Oh sure, it would have been easier if she could have somehow unzipped her scalp, taken her brain out, and held it over the kitchen sink, and just rinsed away all the old regrets, hurts, and humiliations right down the drain, and started over, but that was impossible."

Once the decision has been made, Maggie is determined not to burden those left behind and to cause them as little pain as possible. She makes up a "Things to Do Before I Go" list.  She carefully prepares a vague and impersonal handwritten note on monogrammed stationery with tomorrow's date.  Tomorrow morning, before her exit from the world, she plans to close her bank account, box up all her clothes for charity, and of course, launder the sheets and make the bed.   But before she can finish the letter, her best friend Brenda calls and announces excitedly that she has front-row tickets for the two of them to see the Whirling Dervishes at the Alabama Theatre on Sunday.  Maggie debates about this for awhile and then decides she simply can't disappoint her good friend. What would it hurt to postpone her leaving this world for another six days?   She pulls out a bottle of white-out and carefully changes the date on her letter to November 3.

Suicide is hardly a humorous topic, so why do we immediately take Maggie's intentions so lightly?  First of all, I Still Dream About You: A Novel is written by Fannie Flagg, which gives us the first clue not to expect anything tragic in this novel.  Secondly, Maggie deals with her own impending demise with such logic that we find ourselves almost agreeing with her:

"...On the positive side, by leaving now, she would be saving the government an awful lot of Social Security money down the line; making much less of a carbon footprint; using less oxygen, gas, water, food, plastics, and papers goods; and there would be fewer used coffee grounds in the garbage. Al Gore should certainly appreciate it."

(Spoiler Alert!) Finally, despite her best intentions, Maggie never goes through with her plan.

Maggie, a former Miss Alabama, is a very likable character who never utters an unkind word about anyone, including her nemesis, Babs "The Beast" Bingington, a ruthless real estate broker who has nearly ruined Maggie's own real estate firm.  To others like her friend Brenda, Maggie seems to have "the world by the tail."  Brenda is quite a character herself, getting into all kinds of hilarious predicaments, often involving ice cream. One time she made the local newspaper when she foiled a would-be purse-snatcher with the only weapon at hand, a hot fudge sundae.

The novel weaves stories from the past in with the present, so that we understand Maggie's background and the reason for her feelings of disappointment.  We also learn about her late employer and mentor, the energetic and optimistic Hazel Whisenknott.  There is also a mystery involved, when Maggie and Brenda make an unusual discovery at a house they are preparing to put on the market.

My only exposure to Fannie Flagg before reading this novel was seeing (several times) the movie "Fried Green Tomatoes," based on Flagg's second novel.  So while I really can't compare this book to her other works, I can say I was entertained enough to want to read more of her novels.  It was a refreshing departure from the often dark mysteries and crime thrillers I usually read.  If you are looking for a book to cheer you up or simply make you smile, you can't go wrong with I Still Dream of You.
﻿ ﻿
As a side note, I Still Dream About You was the first book I read on my new Kindle, which I received for Christmas.  I have to admit I never wanted a Kindle; I still like the feel and smell of a real book, being able to flip through the pages and feel its weight in my hands.  But I could see the advantages of a Kindle, particularly for traveling or having it handy while waiting in the doctor's office.  I realized, though, that before I stuffed it in my purse for my flight to Portland at the end of January, that I would need some kind of cover for it to protect the screen.

Checking out covers while shopping at Barnes and Noble one day, I was surprised to find out how expensive they were.  Of course, B and N's Nook is not compatible with the Kindle--kind of like the old days with Mac and PC software--but it gave me an idea of what the Kindle cover might cost.  Being of a cheap frugal nature, I thought why couldn't I just make one?  It didn't take much searching on Google to find several patterns for covers for either e-reader, including a neat one that can stand up in case you want to read while doing something else, like working out on a treadmill.  In the end, though, I decided to make my own pattern. 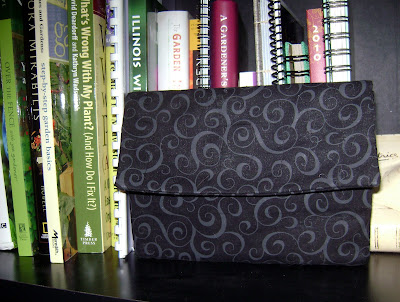 I purchased a small piece of fabric, spending under $2.00 for this cover, but you could make one for nothing if you have a suitable remnant on hand.  I added some quilt batting that I had left over from another project to one side for some added padding, lined the inside to keep the batting from possibly scratching the screen, and added a little free-form machine quilting to finish it off. Iron-on velcro on the flap keeps the pouch closed and free from dust.

Before anyone asks me for the pattern, let me say that I don't sew as much as I used to, and while I'm good at following patterns, I'm not so good at creating them.  I wasted some material  in trying to figure out how to turn this rightside out:)  If you would like to make your own, I'd recommend checking out this website or do a Google search for other patterns.

Disclaimer:  I received no remuneration for this review, purchasing the Kindle version of I Still Dream of You myself.  Also, just a note that I will be taking a break from the Book Review Club for at least the next two months due to some busy days ahead for me.  I hope to be back later this summer with another reading recommendation for you.


Be sure to check out our hostess, Barrie Summy, for other book reviews this month.
Posted by Rose at 7:00 AM