Taking a break from decorating and Christmas shopping one day this week, I sat down to watch a little TV and happened to find a documentary about Sissinghurst Castle.  I was mesmerized by the beauty of this place, especially the gardens created by Vita Sackville-West and her husband Sir Harold Nicolson.  As is always the case when I view fabulous gardens, I long to have something similar in my own garden, although on a smaller and more manageable scale.  I've toyed with the idea of creating my own White Garden, one of the more popular and novel areas created by Vita.  Mother Nature must have read my thoughts, because she obliged by creating an all-white garden for me this weekend. 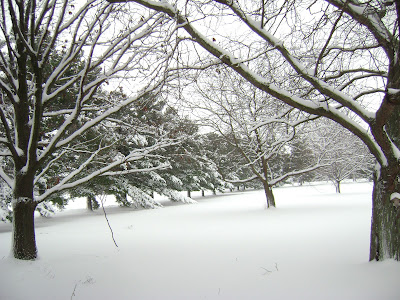 The weather forecast was for a major snowstorm to hit the Chicago area, while we, about 150 miles south, were to get only 2-3 inches.  As is usually the case, the weathermen miscalculated, and the brunt of the storm hit us instead, blanketing our area with 7 inches of snow by Saturday afternoon. 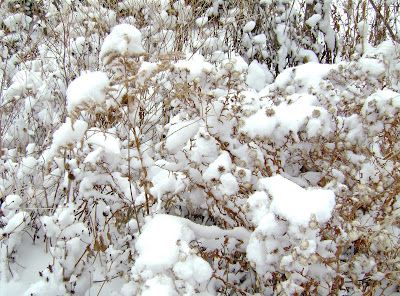 Suddenly, the butterfly garden that was a riot of color in the summer became a white garden instead. 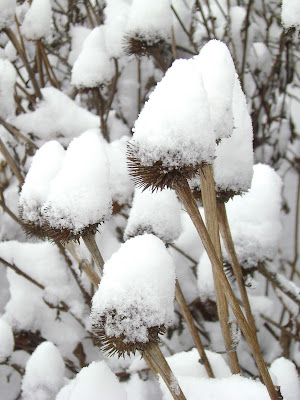 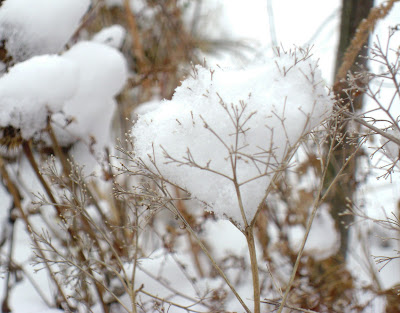 The remains of Joe Pye Weed make the perfect dish for a frosty confection. 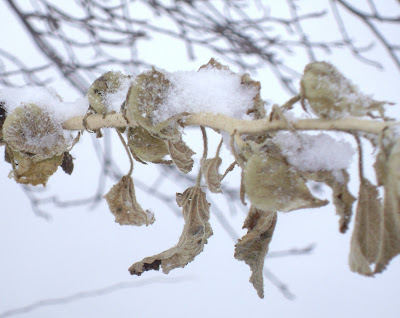 Less than two weeks ago I wandered the garden in a light jacket, noticing the brown seedheads of hollyhocks.  Now, they, too, are part of the white vista. 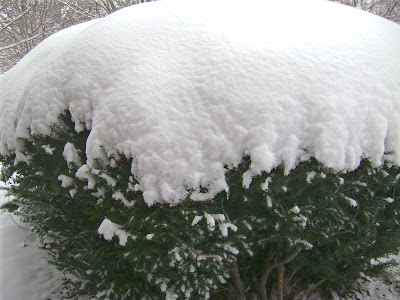 My "cupcake" yews look a little better with frosting on top. 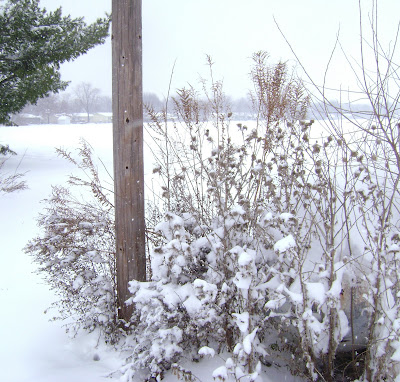 Even a remaining patch of weeds out in back looks better in white. 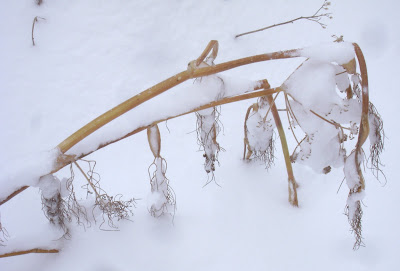 Not everything likes the snow, however.  Dill bows to the force of the Midwest wind. 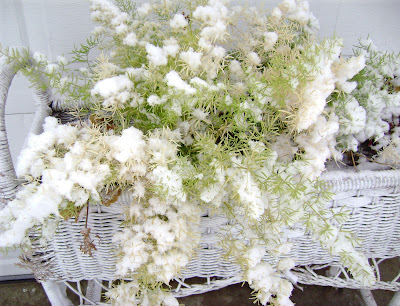 The forgotten fern stand reproaches me with its frosty foliage.  Looks like it's too late to overwinter these asparagus ferns and geraniums. 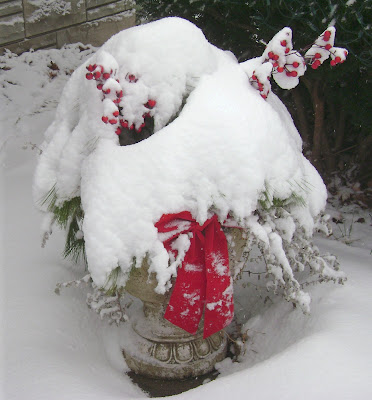 I am glad I took advantage of Friday's milder weather to put up the outdoor lights and decorations.  But it's hard to tell right now whether the pine boughs and berry stems I added to this urn created the festive effect I hoped for. 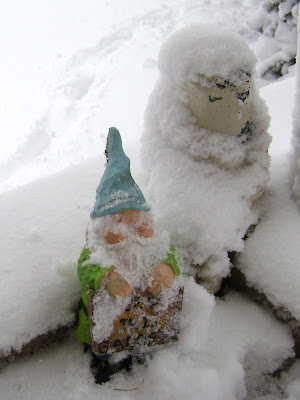 But faring the worst are the garden gnome and bikini-clad Ms. Frog who could probably both use a cup of hot chocolate and some time in front of a cozy fire. 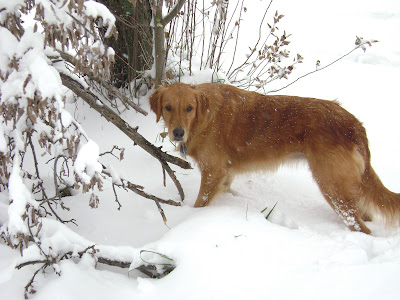 The first snowfall is always a bit magical, though the enthusiasm for it soon wanes as winter plods on.  But the one who never loses her enthusiasm for a romp in the snow is Sophie.  She was excited to accompany me as we made our way around the house and yard, looking for more evidence of the garden. 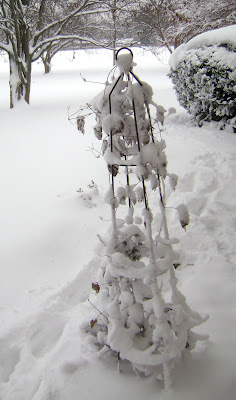 It wasn't hard to spot the clematis on its trellis. 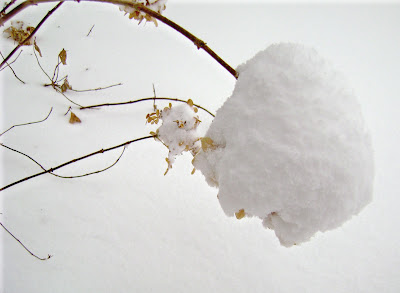 The hydrangea 'Limelight' now looks more like a snowball bush. 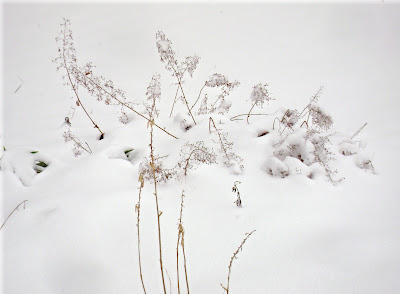 Dried hosta and heuchera blooms are the only other visible remnants of the rest of the shade garden. 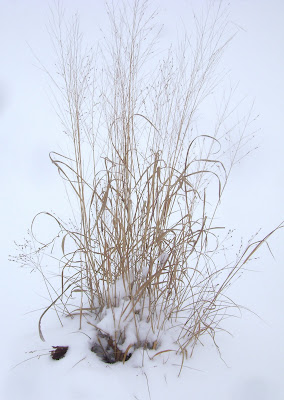 In the lily bed, however, the new switchgrass 'Shenandoah' really stands out and against a background of white, finally can be photographed to show its lovely structure. 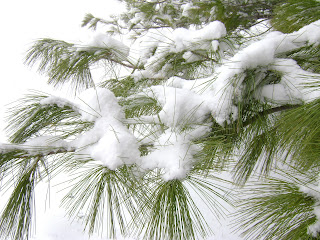 A garden filled only with white blooms may sound rather boring, but Vita Sackville-West's famous White Garden depends on contrast, especially green and silvery foliage, to create a dramatic effect. 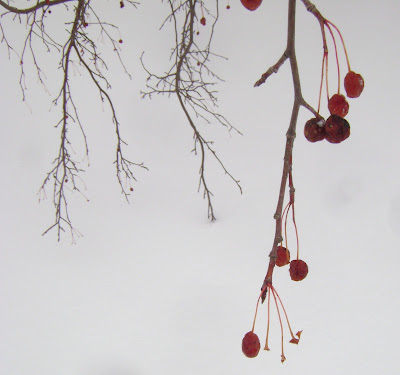 While the evergreens provide plenty of green here, the most dramatic contrast is the color red as seen in the tiny berries still covering the flowering crabapple trees. 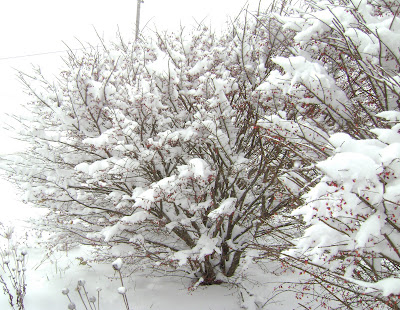 Say what you will about burning bushes, they do look good in the fall and just as good in the early winter. 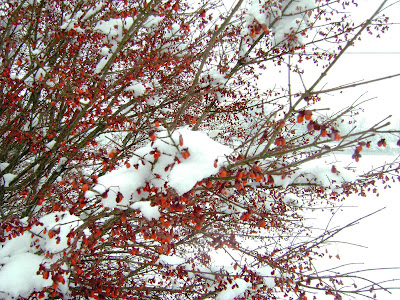 Their red berries make the most noticeable contrast of all. 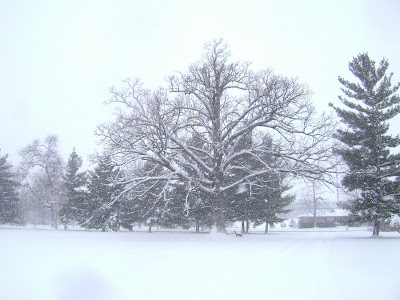 I'm not sure I'll ever attempt planting a white garden--I like color too much.  But judging by the cold forecast for at least the week to come, my Winter White Garden may be here to stay for awhile.
Posted by Rose at 7:15 AM