While everyone may be thinking ahead this week to Christmas, I'm still reflecting on last week's celebration for this December Garden Muse Day:


I piled up my plate
and I ate and I ate,
but I wish I had known when to stop,
for I'm so crammed with yams,
sauces, gravies, and jams
that my buttons are starting to pop.


I'm full of tomatoes
and french fried potatoes,
my stomach is swollen and sore,
but there's still some dessert,
so I guess it won't hurt
if I eat just a little bit more."

- Jack Prelutsky, "I Ate Too Much"

I hope that everyone had a great Thanksgiving holiday and that no one over-indulged too much.  The group at my house was smaller this year as Arizona Daughter and her fiance weren't able to come home as they did last year.  Youngest Daughter also was absent, spending her second Thanksgiving in Oregon, far away from home.  But I was happy to have both my parents here as well as both sons with their families (meaning all five grandchildren, happily), so it was a good day.  And I did talk to both daughters on the phone.  When Youngest Daughter called, her first question was "What time did you finally eat?" . . . and then she giggled.  Now that may seem a strange comment on this traditional holiday, but the timing of Thanksgiving dinner in recent years has become a family joke and a source of yearly consternation to me.  Let me explain this annual rite I refer to as "Turkey Trials and Tribulations" . . .

About ten years ago my husband, not a big fan of roasted turkey, sampled some deep-fried turkey at a local establishment and pronounced it the best turkey he had ever eaten.  He promptly decided this was what we should serve at our next Thanksgiving dinner and went out to buy a turkey fryer for the holiday.

Now for anyone who thinks deep frying a turkey sounds weird or even blasphemous, let me explain the process.  A deep fryer designed specifically for a 12-pound (or less) turkey is attached to a small propane tank to heat up the oil.  When the oil reaches 400 degrees, the turkey is put on a spit and plunged into the hot oil which quickly browns the skin, keeping the meat inside moist and juicy.  The cooking process takes less than an hour, obviously a much quicker method than the usual roasting time in an oven.

That first Thanksgiving of the deep-fried turkey, Arizona Daughter's then-boyfriend was a member of the university football team which had a game scheduled for Thanksgiving Day.  Everyone but me went to the game, because someone had to cook all the trimmings, right?  I listened to the game on the radio while I went about peeling potatoes, mixing the stuffing, and putting together the green bean casserole.  Husband, usually known as Mr. Procrastinator but also known as Mr. I-Don't-Cook, was in charge of cooking the turkey as soon he got home, a job I gladly relinquished to him.  Always a list and schedule-maker, I had everything planned so that within an hour of everyone's arrival, dinner would be on the table.

Once the hungry crew arrived home, the countdown began.  Potatoes were set on the stove to boil, casseroles put in the oven, and the propane unit for the fryer was lit, all with the precise timing of a rocket launch--45 minutes until lift-off!  But there was just one problem--neither Mr. P nor I had taken into account the time it took for the oil to heat up.  Minutes stretched into a hour and then two hours as the thermometer testing the oil inched up one degree at a time.  Meanwhile, the mashed potatoes stiffened and the noodles cooked especially for then-boyfriend congealed in the pot.  And I stewed and then simmered . . .  Three hours later, the turkey was finally done and we sat down to eat.  Everyone said dinner was delicious, but I think they were just so famished that anything would have tasted good.

After that disastrous dinner, I vowed to go back to roasting a turkey for the next Thanksgiving, but Mr. P was adamant, convincing me that now that we knew better about the timing, things would go more smoothly the next time.  But propane units are temperamental and not very reliable, so while I had estimated two hours for heating the oil, the next year it took nearly three.  Even when I got smart and had Mr. P start the oil and cooking much earlier than needed, something still would go wrong.  It got to the point that when I invited everyone for dinner, I would give the time as 12 . . . or 1 . . . depending on the frying turkey.

A few years ago, Mr. P decided to switch to an electric fryer, complete with its own thermostat, making it a more reliable method of predicting cooking times.  But even then, there are some pitfalls.  Testing the doneness of a turkey is much more difficult when you have to pull it out of boiling oil and then plunge it back in if it's not done.  And a few minutes of cooking by this method may equal a half an hour of the conventional roasting method.  One year, after testing the turkey, I suggested a few more minutes of cooking time, and we wound up with a charred fowl, though the meat actually tasted juicier than it looked.

According to the Department of Agriculture, this year's Thanksgiving meal for a family of four cost around $43, quite a bargain for such a feast.  Turkey is always an economical meat, but especially at Thanksgiving time when stores offer special prices at less than $1.00 a pound.  But deep-frying isn't quite so economical . . . Fresh peanut oil must be purchased each year, and the 3-gallon jug I bought cost nearly $30.  I bought two, because I thought we needed four gallons of oil, bringing the total to $60--five times what I paid for the turkey!  And let's not forget that fancy electric turkey fryer--$100 for an appliance used only once a year.  I think I could probably serve filet mignon to my family for the same price:)

But when I suggested going back to the old tried and true method of roasting a turkey, my family gave a resounding "no."  Both my sons prefer the taste of deep-fried turkey, and the cooking process has become somewhat of a male ritual here.  Mr. P sets up the fryer in the toolshed (for safety's sake), and my sons keep him company part of the time, trekking back to the house every 15 minutes to give us progress reports.  Like the early cave-men, they eventually come out of their cave, proudly carrying their finished trophy for all to admire.

Last year, by some miracle, the whole process went off without a hitch, and dinner, complete with a perfectly browned bird, was served at the appointed time.  I fully expected this year to be the same, but I should have known better . . . On this Thursday morning, I had the stuffing mixed and already in the crockpot to bake, sweet potatoes were baking in the oven, later to be mashed for my special casserole.  I was taking a moment to relax, when Mr. P walked in the door at 8:45 and said the fryer wouldn't turn on.  "What do you mean, it won't come on??"  He had checked it just days before and pronounced all systems go, yet on the very day it was needed, the fryer decided to just quit!

There was nothing left to do but put the bird in the roasting pan and hope and pray that the three and a half hours left till dinner were enough time to completely cook it.  I scrambled around for the next few hours, juggling dishes in and out of my small oven and turning the temperature up and down--as high as possible to get that darned turkey cooked in time, then lower to avoid burning the sweet potatoes and green beans.  The stuffing was taken out of the crockpot to make room for the ham--no way was there room in my oven for both a turkey and a ham!   Meanwhile, family members arrived, and I was on my way to an all-too common Thanksgiving fowl mood.   Finally, an hour after the planned time, we sat down to dinner, and I finally relaxed.  Another Thanksgiving near-disaster to add to the family lore! 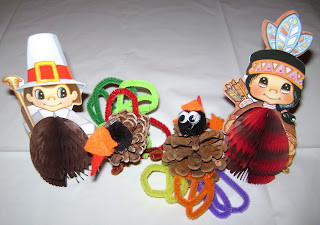 Somewhere I read that Illinois ranks second only to Louisiana for fires on Thanksgiving Day, no doubt caused by all those propane fumes swirling around the family dinner.  Thankfully, we have never had a fire on this holiday.  Nor have we had the turkey carried off by a dog, ala "A Christmas Story."   But Mr. P has vowed to either fix the fryer or buy a new one for next year, so both possibilities exist in the future, especially the second scenario with Sophie around:)


Garden Muse Day is hosted the first of each month by the ever-gracious Carolyn Gail . . . who probably served her Thanksgiving dinner on time:)
Posted by Rose at 7:25 AM