ABC Wednesday: Not the Usual

As the ABC round winds down to the end of the alphabet, I find it harder each week to find a suitable word or words to highlight. Is there such a word as Un-Snow?? I think not, but that is pretty much what we've had here the past twenty-four hours. While blogging friends in Indiana and as far south as Mississippi and Texas have had snow, the big snowstorm forecast for us last night turned into a wet, cold, miserable rainstorm. So let's turn to the garden for a unique U . . .

Since beginning to garden, I have found that there is much more to a plant than just the stamens and sepals I learned about in junior high science class. Flowers like roses or lilies that produce one flower per stem are called solitary flowers. But other flowers produce an inflorescence, which refers to a cluster of flowers and how they are arranged on a single stem. One type of inflorescence is the Umbel, in which the clusters of florets are borne by small stems that arise from one point on the main stem of the plant. An example of an umbel inflorescence is the "Queen Anne's Lace," pictured above. 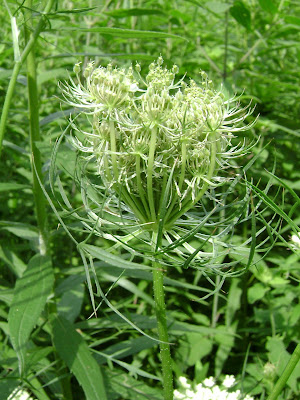 You can see more clearly in this budding "Queen Anne's" the shape of the umbel, which resembles an inverted umbrella, and, in fact, the two words come from the same root. This plant is also known as "wild carrot," but I much prefer the more regal name of "Queen Anne's Lace." Though it grows wild on the roadsides here, it's much too pretty to be called a weed, in my humble opinion. 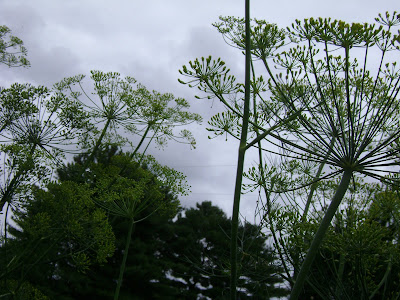 Two other excellent examples of plants with Umbels are dill and fennel--I think the fennel is to the left, and the dill to the right. 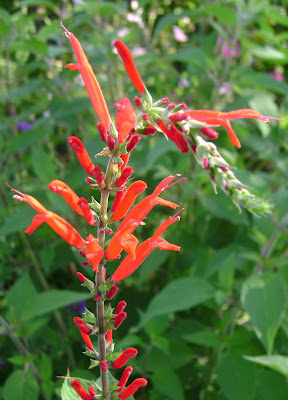 To illustrate further how different inflorescences can be, you need only to look at other flowers in the garden. Notice the florets growing along the stem of this pineapple sage. I think this is a spike, but it is definitely not an umbel. 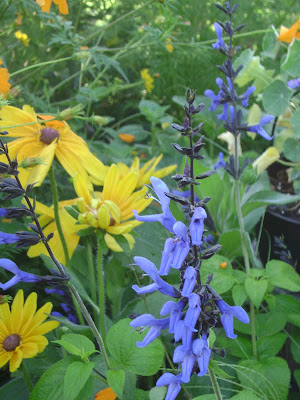 Neither are these--another salvia, "Black and Blue," and the rudbeckias, or Black-eyed Susans, illustrate other types of inflorescence as well. 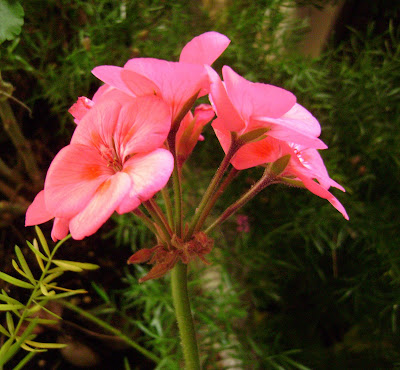 Regular readers of this blog know that my knowledge of botany is very limited, so I had to do a little research to clarify this definition of umbel. I had planned to include this photo of a geranium, more appropriately known as a pelargonium, as another example of an umbel inflorescence. But when I looked it up to be sure, one source called this a pseudo-umbel. I think I'm getting in over my head . . .


And I certainly don't want to mislead anyone, in case you think all these flowers are now in bloom in my garden. Other than the geranium now residing in my garage, all these photos were taken in the summer.

No, this is what an Umbel looks like in my garden at the moment . . . 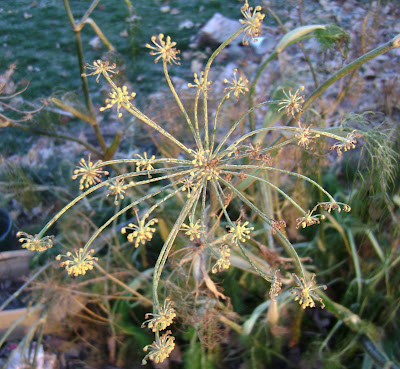 I had planned to end this post here, but this past weekend brought to mind another U for the Unusual harvest we have had this fall. The cornfields surrounding us were finally harvested on Monday, the latest I can ever recall. Usually the harvest is done by the end of October, but a late spring planting coupled with a very wet fall kept farmers out of the field until recently. 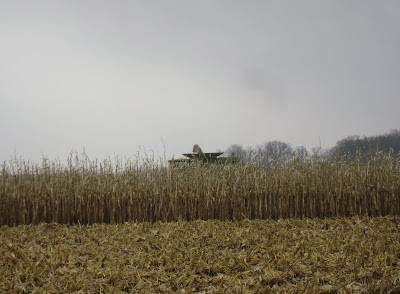 Once the soil was dry enough so that farmers could enter the fields with their heavy equipment, there was yet another problem. The corn itself had retained so much moisture that it had to be dried before it could be stored. 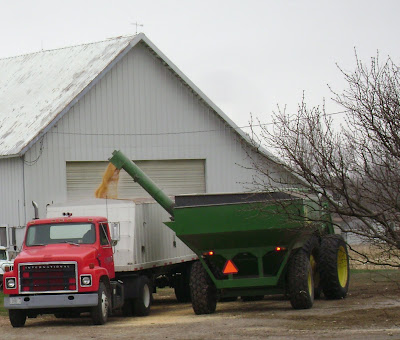 Grain elevators could dry only so much grain at a time, resulting in limited hours of operation while the corn was readied for storage. Semi-trucks loaded with grain found themselves sitting in line for hours at the local elevator or even having to wait until the next day to unload. This meant the harvest was extended even longer, as the farmer had to stop his combine and wait until he could unload the corn into an empty truck. In our fields, for example, what should have taken a day or day and a half to complete turned into a four-day task instead. 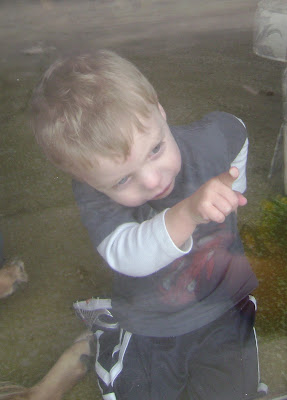 But all this doesn't matter much to a two-year-old who finds tractors, combines, and any kind of machinery totally fascinating. I picked up Youngest Grandson one morning so that he could get a firsthand look from the family room window. I think he was pointing out the combine to Sophie, who also finds all this activity very exciting. 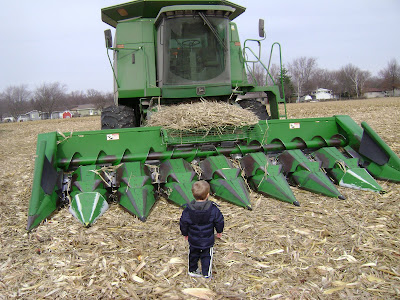 Idle hours spent waiting for an empty semi also gave Grandson a chance to get a close-up look.

Looking out my window as I type, I can see corn still standing in some fields in the distance. After last night's downpour, I don't know when those fields will be harvested. Some farmers may find themselves working in the fields while Santa gets his sleigh ready.

Once again, thanks to Mrs. Nesbitt for hosting ABC Wednesday, and do check out the ABC blog for more interesting takes on the letter U.
Posted by Rose at 8:12 AM