On the 20th of each month Tina of In The Garden posts her monthly vegetable garden update and invites others to join her. I'm glad to be able to participate once again, as the vegetables here are starting to mature. But first, since I missed this month's Garden Muse Day on the 1st of July, here's a little poem to inspire you:

Seedlings
Weedling seedlings
sprout at night,
at dawn, at noon
in broad daylight.

Weedling seedlings,
sneak attack.
Yank them out,
but they'll be back.

--Juanita Havel from I Heard It From Alice Zucchini

Despite the sentiment of the poem, my vegetable garden is looking much better this year than last, thanks to the newspapers and mulch put down early in the season. That being said, please ignore any weeds you might see in the following pictures. 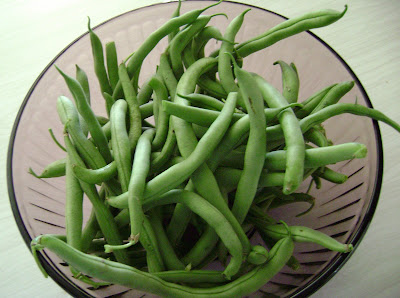 The big news this month is that I picked my first green beans a week ago on July 12. All the rain we've had has been good for the beans, and they seemed to grow an inch or more overnight. I should be able to pick more by mid-week. Other than the radishes and some volunteer lettuce, the beans are the first vegetable harvest of the year. 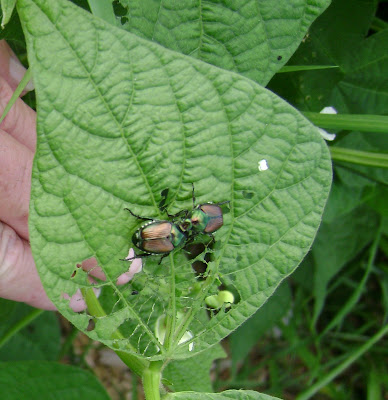 Trying to get a photograph of all the bean blossoms, which didn't work, I found these two nasty creatures on one bean leaf. I've never seen Japanese beetles on green beans before; I'm hoping they had just strayed from nearby hollyhocks. 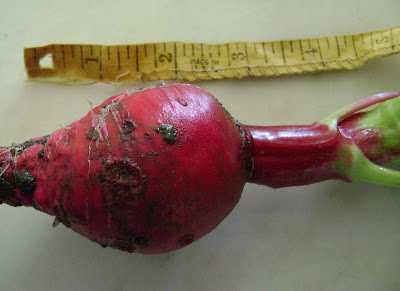 This is what happens if you forget to pull all the radishes as soon as they're ready. The radish seed was planted to mark the row of carrots, and few were actually eaten. Assuming this one was way too hot for consumption, I added it to the compost pile. 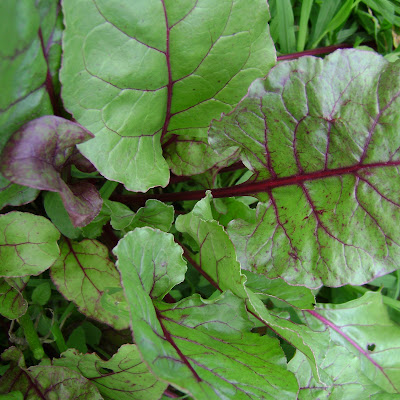 New to the garden this year are a few beets which appear to be doing well despite the fact that I didn't thin them properly. 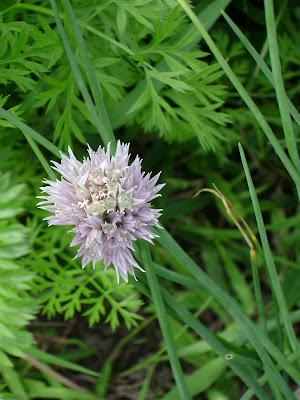 Also new this year is one plant of chives. I keep forgetting to cut some for cooking, but I just like the way they look in the garden. 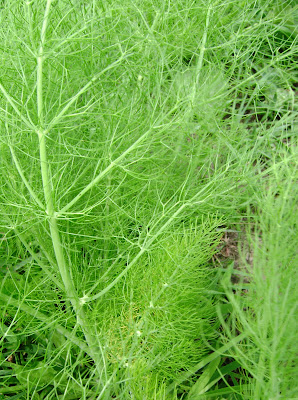 The fennel is growing by leaps and bounds. This is another plant not really intended for human consumption, but rather for the butterflies. No sign of caterpillars, however, so I may have to find some recipes using fennel after all. 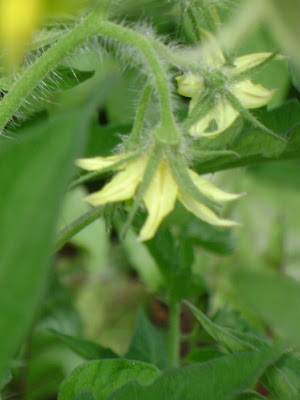 The vegetables that will be sure to be eaten, though, are the tomatoes. All are looking very healthy and putting out lots of blooms. Even Mr. Procrastinor himself checks their progress regularly; he has been known to eat the first ripe tomato in the garden before I even have a chance to pick it. 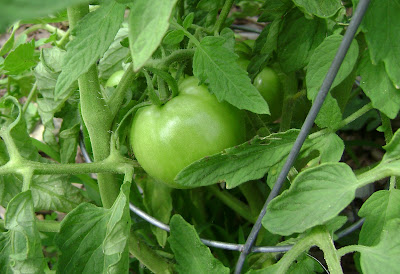 As you can see, he won't have too much longer to wait. 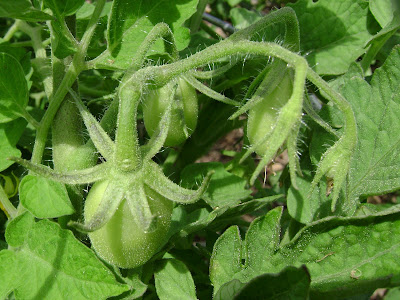 Last year I wrote down all the varieties of tomatoes I planted and exactly where they were planted. This year I stuck the plant tags in the ground beside each grouping when I planted them, but I think they've all disappeared through the mulching and weeding. So much for comparison of varieties for planning next year's garden.I'm not sure what type of tomatoes these are--at first I thought they were a grape tomato, but now I'm thinking they're Romas. It should be obvious soon enough if they get much bigger.

Also growing in the garden are carrots, onions, parsley and green peppers. The spinach and lettuce were pulled out to make way for zucchini and summer squash. The summer squash never appeared--I think the seed was too old--but the lone zucchini plant is doing well and, barring any squash beetles, should produce more than enough for us. I'm looking forward to next month's report when there should be more vegetables ripe and ready to pick!

The last photo has nothing to do with the vegetable garden, but I had to add it after complaining on my last post that the butterflies have been conspicuously absent this year. The evening after I posted my Bloom Day post, I had a visitor . . . 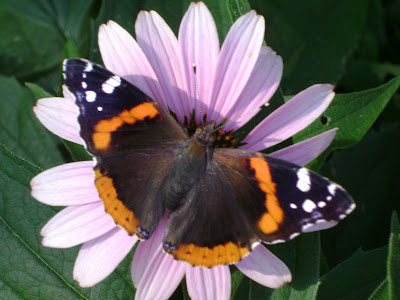 . . . a Painted Lady came to enjoy the coneflowers! I welcomed her and told her I have been preparing a feast of blooms for her. I'm hoping she invites all her friends and relatives to join her!