GBBD July: It's all about the Coneflowers...

Today is that special day of the month, Garden Bloggers' Bloom Day, and I am so glad! It seems for the past few weeks I have been focusing on other people's gardens that I haven't shown much of what is blooming in my own garden. So put on your walking shoes, and let's wander around to see what is brightening up my little corner of the prairie. 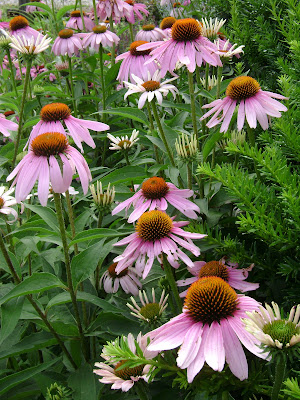 Everywhere you look these days, the purple coneflowers are in bloom, and my garden is no exception. They have been multiplying like crazy, threatening to take over one corner of the main garden next to the house. Next year I will have to get an earlier start on digging up and transplanting the seedlings, but I don't really mind--they are my favorite plant, and I can never have too many coneflowers. 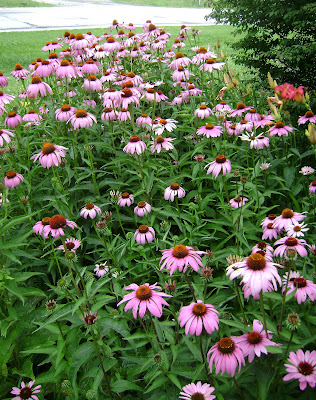 The same is true of the roadside garden, where they are obscuring some lovely daylilies. Coneflowers are native plants and attract bees, butterflies, and other winged creatures . . . but I've mentioned this all before; if you want to know more about coneflowers, you can read my post from last year's July Bloom Day, where I focused on coneflowers more than any other plant. They also make great photo opportunities since the center makes a nice landing spot for bees and butterflies. Sadly, I haven't seen many butterflies this year, but I've taken dozens of photos of the bees on the coneflowers, including one on yesterday's post. 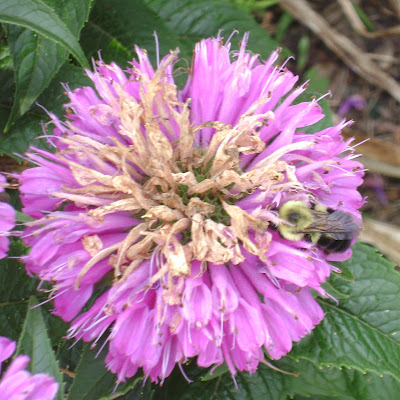 One plant that also has attracted bees, as I expected it would, is the bee balm, name unknown, but it is a dwarf variety. This plant's blooms have faded, but since it began blooming the day after the June Bloom Day, I thought it deserved a shot on this Bloom Day post.

Another plant that has been blooming for quite a while is the hollyhock. They began blooming about the same time the Japanese beetles arrived, so many of the leaves now look like green lace. 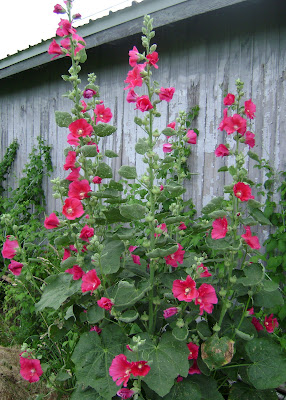 All my hollyhocks are the old-fashioned variety, originally planted by my husband's grandfather or from my grandmother, transplanted from my mother's garden. I don't know why I bothered to collect seeds last year, when they self-seed so easily. This hollyhock plant is the tallest and fullest of all . . . and it's growing out of my compost heap! (Shhh, don't tell anyone what a lazy composter I am.) 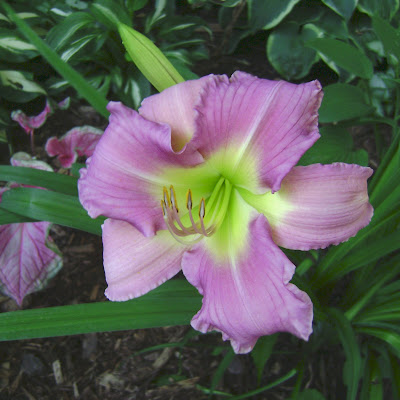 Last month the only daylilies I had to share were my Stella d'Oros. Thankfully, I have a few others that are now blooming, but not nearly as many as I would like--I've been envying all the beautiful daylilies I've seen on other blogs, and I intend to plant more, just as soon as I can figure out where! Above is a new one I purchased last year, and the tag is around here somewhere . . . this is another good reason to add labels to your blog posts, because I also can't find the post from last year when I planted it. 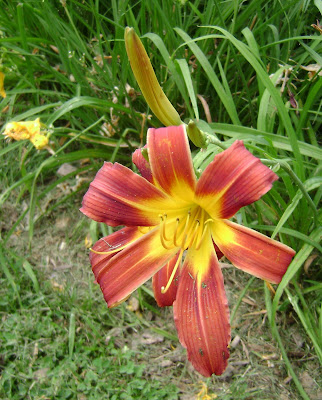 Other lilies here have no names; this one was an "accident", I think, in the midst of a planting of Stellas. 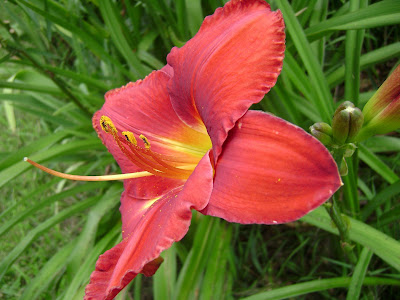 Another unknown variety, this deep rusty-red was a passlong from my aunt. 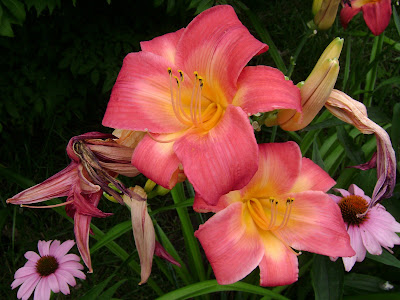 As were these. I find it hard to get the true color of reds and deep pinks to show up in my photos; dark coral is the best way to describe their true shade. Although I transplanted several of these, the rest of the lilies are planted behind the roadside coneflowers, something that needs to be remedied next year, because they really deserve to be seen by passers-by. 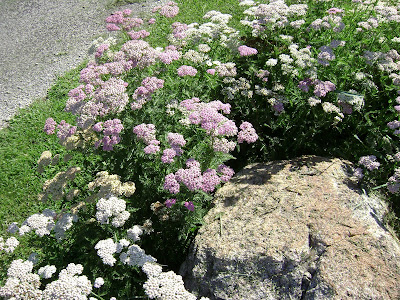 Another common flower, the yarrow, is surrounding this large boulder. As the blossoms fade, I just snip them off--no worries about hurting this plant:) 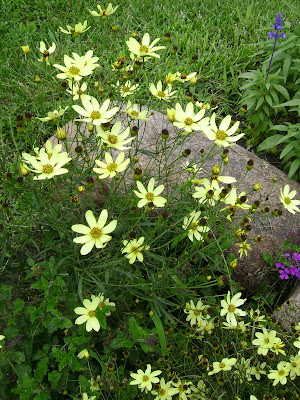 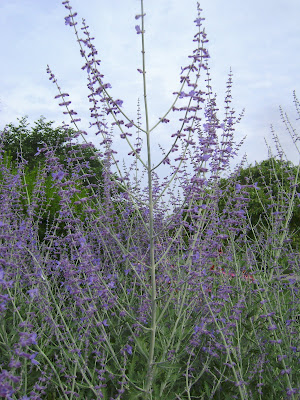 A new bloom since last month is the Russian Sage. Not a very good photo, but since it's a bee magnet, too, I'll have plenty of opportunities to get a better photo later. 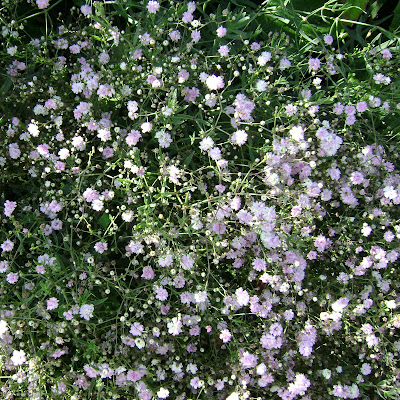 Another plant that I can't photograph well is the Baby's Breath. I always thought this was hard to grow, but this plant has survived and thrived here for several years. 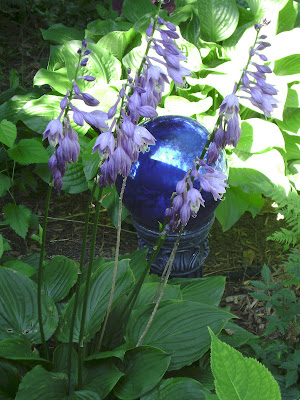 In the shade garden, the hostas are sending up blooms, too. I have many different varieties of hostas, providing a steady succession of blooms. 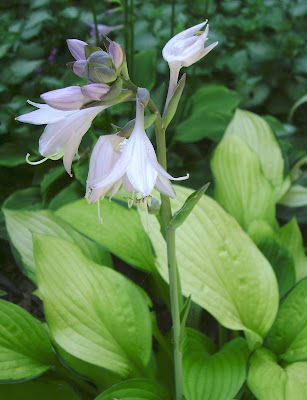 I know not everyone likes these blooms--after all, it's the foliage of a hosta that is the beauty of a hosta. But I like these blooms, some of them quite dainty, and I think they add some vertical interest to a shady area. 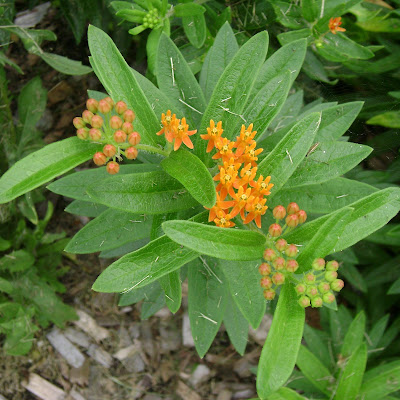 Our Bloom Day hostess, Carol, has asked what differences we are noticing in our garden this year. I think some of my flowers are blooming a little earlier than last year, but overall the biggest difference I notice is that everything is doing better this year. With the regular rainfall we have had this summer, my garden is fuller and healthier-looking than it's ever been. This butterfly weed, Asclepias Tuberosa, is just one example. Not only is it blooming, but it's probably three times the size it was last year. Now if I only had some butterflies! 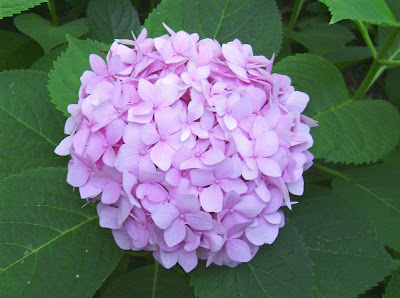 Nowhere do I notice the benefits of steady rainfall as much as with the hydrangeas. I lost one "Endless Summer" over the winter, but the two older "Endless" are fuller and taller than ever before and rarely wilt in the heat. They have just begun to put out a few blooms in the last two weeks, but many more buds are showing. 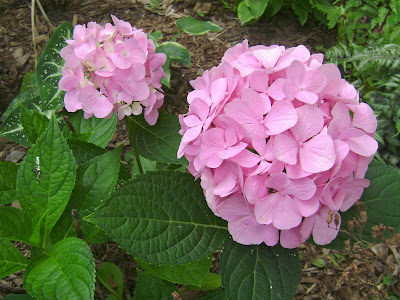 The first hydrangea to bloom this year was my new macrophylla, "Let's Dance in the Moonlight." I bought this at an end-of-the season sale last year, so this is the first time I've seen its blooms. This photograph doesn't do it justice--though the plant is smaller than the "Endless Summers," the blooms are much larger and fuller. I think "Endless Summer" may have been just an infatuation; instead, I want to dance in the moonlight a little more with my new love:) 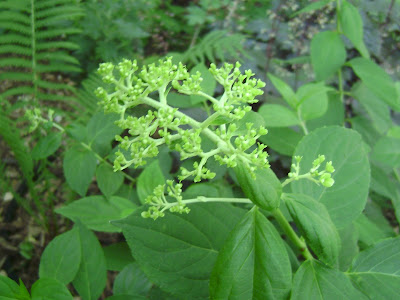 But maybe I shouldn't give my heart away too soon. There's another new beauty looming on the horizon--by the next Bloom Day, I will hopefully have some blooms to show from another new hydrangea, "Limelight."

That's the joy of gardening. While July is the height of summer blooms here, there will be something new next month. 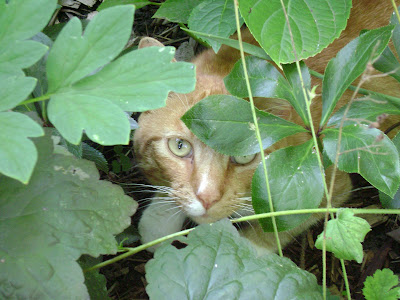 You never know what might be peeking out of the ground next time.
To see other blooms from around the world, be sure to visit Carol at May Dreams Gardens. Thanks, Carol, for being such a great hostess!
Posted by Rose at 2:00 PM