A few weeks ago, Monica the Garden Faerie posted her first "Mish Mash Monday" post, and I liked the idea so well that I decided to join in today. I've changed the name slightly for my post to avoid any issues of copyright infringement:) Besides, I would have had to add an extra M word--"Mush"--to describe the state of my brain at the moment. Two weeks of fighting a virus and bronchitis have led to sleep deprivation, thus the mushy brain. I finally broke down and went to the doctor on Friday who gave me some medications which don't seem to be helping much. But she did reassure me that everyone who has come down with this virus and nasty cough lately has gotten over it in six weeks . . . Argh!! 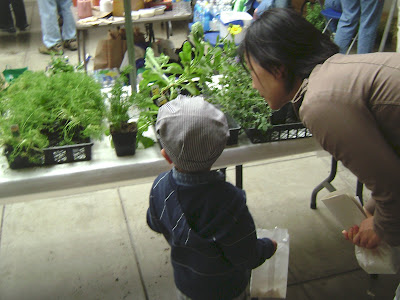 But enough of my complaining. A week ago Beckie and I took a day off for some serious plant shopping, including a visit to the local Herb Society's plant sale. Our shopping expeditions and garden touring have been limited this spring, so it was fun to finally be able to find a day that fit both our schedules. This was the first time we had ever attended this event, and though neither of us grow many herbs, we both walked away with a few new purchases. I did buy some chives, but otherwise my choices were more for scent and appearance rather than cooking, such as the lemon verbena and pineapple sage I purchased. 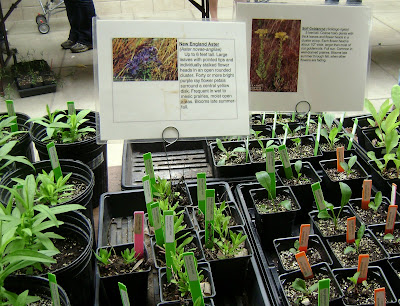 At the same place as the herb sale, the local Hosta Society and the Prairie Plant Preservation Society were also holding a sale. All three vendors had lots of volunteers staffing them, which was great because they were more than willing to answer any questions we had about particular plants. I couldn't resist buying another hosta, of course, but I was especially intrigued by the Prairie Plant selections. All plants were clearly labelled, with large labels showing their appearance at maturity and some relevant facts about each. I was hoping to find a true prairie coneflower, but they weren't available on this day. However, I did manage to take home several other plants, including a New England aster pictured above, more butterfly weeds, an Obedient plant (which I might regret later), some Joe-Pye weed, and a spindly stalk of grass-looking plant, which the volunteer assured me would grow into a beautiful Blazing Star. If they all survive in my garden, I'll be sure to feature each in full bloom later in the season. 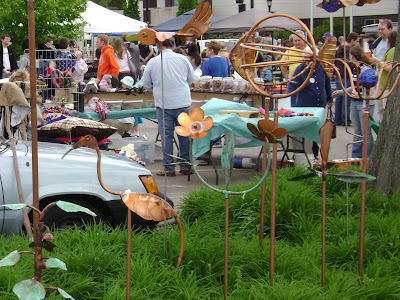 Outside, one of the first Farmers' Markets of the season was also being held. It was still too early in the season to find fresh fruits and vegetables, but lots of other vendors made for some interesting "window shopping." We checked out these whimsical metal garden ornaments, but they were rather pricey. Besides, there wouldn't have been room in my trunk for one after our plant purchases that morning in addition to the plants bought later at our favorite garden center.

Several of you commented after I showed a photo of my plant-filled car trunk last week that I certainly had my work cut out for me. I hate to tell you, but that trunk full was just one of several this spring. I have been buying lots of annuals for containers and a few new perennials, and I've also been buying some plants for my son and daughter-in-law to help them spruce up their landscaping. 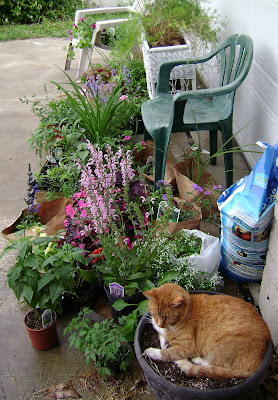 All of this buying has resulted in what Marnie cleverly called a "pot ghetto" in front of my garage door. Nobody will be putting their car in the garage any time soon:) Part of the problem has been all the rain we have had which has kept me from being able to plant anything for some time. But that's a story for another day . . . think ABC . . . "R." In the meantime I've been trying to fill up containers; Tarzan will soon have to find another spot for his naps.

***********
After a little over a year of blogging, you would think I would have this blogging business down pat. I just figured out last week that I can actually move my pictures around on a post after uploading them! At the same time, I still haven't figured out the spacing issues here--Blogger seems to have a mind of its own on that. Another plus--after being unable to leave comments on certain blogs, I discovered it had something to do with my internet browser. Now I open Firefox instead of Explorer, and I have no problems. That brainstorm only took about 6 months to figure out:) And finally today, I figured out why my photo never showed up on anyone's "Followers" list--I had marked the "anonymous" following when I added most people to my "Blogs I Follow" list. So if you suddenly notice my photo as one of your followers, that's why. And if you don't see me, don't feel slighted . . . I did this one dreary day in February when I was bored, but I never got everyone uploaded on that list.
I told you my brain had turned to mush . . . 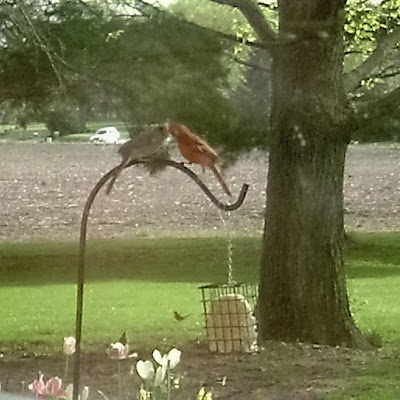 I have to show you this photo above even though the quality is terrible. My husband took it--a first--one day while I was occupied elsewhere. Sitting in the easy chair in the living room, he was watching a pair of cardinals on the suet feeder and quickly grabbed my camera. Once he figured out how to turn on the power, he started snapping away, getting this photo of the male feeding the female a piece of sunflower seed. I think cardinals are my favorite bird of all, not because they're so common here or because they are our state bird, but because of the loving behavior they show each other. Now that I've shown my husband where the zoom button is, maybe he can get a better photo next time:) 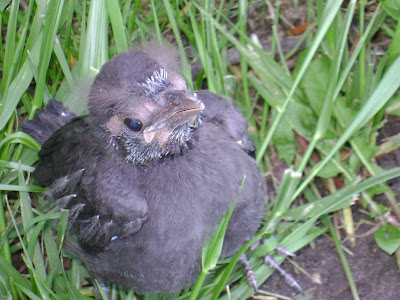 My five-year-old granddaughter commented one day while visiting, "Grandma, the birds like your yard much better than ours." I explained to my little nature lover that it probably had to do with all our trees, especially since they live in a new, virtually tree-less subdivision. I only wish she had been here the day I found this little guy on the ground. Well, actually, I didn't find him . . . 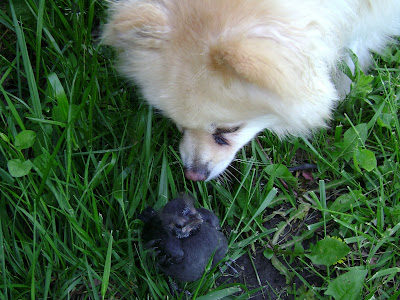 . . . Coconut did. Coconut was very concerned about this little creature, and together we managed to snare it in a butterfly net. I put it up on a tree branch, and it promptly flew off to the ground once again. I don't think it was injured in anyway; it just hadn't yet mastered high altitude flying. I realized afterwards it was probably a starling, those black bullies that I wish would leave our yard, but still I couldn't just leave it alone. Thank goodness none of the cats were out that day nor Sophie, whose curiosity is less gentle than Coconut's.

Thanks for following all my meandering thoughts this morning. I'm happy to report the sun is out this morning, and the forecast doesn't hold a drop of rain in it for the week! Maybe some of those homeless plants will finally get planted. Wishing everyone a good week in the garden!