For the past few weeks the operative word around here for the letter R has been . . . 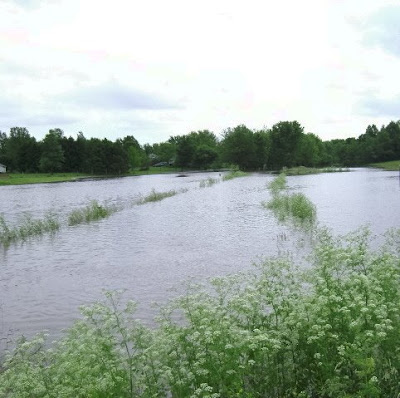 A little over halfway through the month, we have already received our average quota of rainfall for the entire month of May. Most of the time we have had gently falling showers that were simply an annoyance to this gardener who was waiting for the garden to dry out, only to have it turned to mud by still another shower. But last Friday we had one of those gully-washers complete with high winds and threats of tornadoes that sent us and son's family (their house has only a crawlspace) down to our basement for the evening.

Saturday morning we had an eerie feeling of deja vu--fields, yards, and streets were flooded much like the downpour we had in early June of last year. The photo above was actually taken a year ago, since I wasn't energetic enough to get out and take photos this time. But looking across the road, I could see the same "lake" rippling behind the neighbor's as last year. This is actually a grassy area behind a small housing development and backing up to a baseball diamond near the water treatment plant. There is a small drainage ditch running through the center that normally has only a trickle of water running through it. 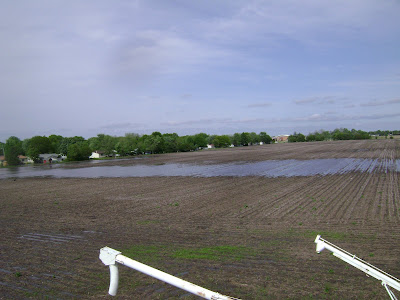 While I have been waiting for dry soil to plant the ever-growing accumulation of homeless plants, the farmers must really be worried. Last year's flood resulted in late plantings and thus a less than successful harvest. Not quite as dramatic a photo as the first one, this picture above shows the fields behind our house, with water accumulating even deeper near the subdivision to the left. If you are wondering about the alien-looking white things in the bottom of the photo, they are augers used to pour grain into a bin. My husband climbed up onto the top of our grain bin to take this photo. Before you think what a wonderful husband he is to risk life and limb for this blog post, he had no idea I was going to use this photo, but was taking them for himself to record some drainage issues here. Not saying he isn't a wonderful husband . . . (whew! good thing he doesn't read this!) 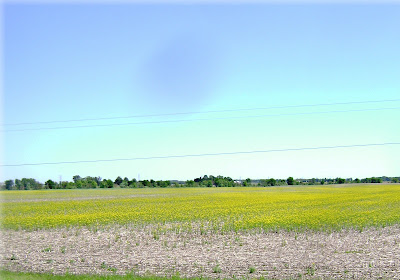 While few, if any, fields have been planted with the usual corn and soybeans--late in the season already--many of the fields are a sea of yellow. This strange-looking crop is actually a field of weeds and is a common sight throughout the area right now. There was some debate on a local radio talk show yesterday about what type of weed this is, but someone finally identified it correctly as a "yellow rocket." 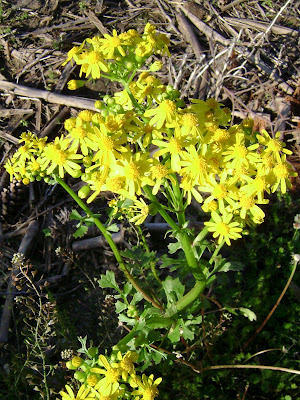 The yellow rocket is a member of the mustard family and tends to appear in untilled soil. Most farmers today have abandoned the old methods of plowing the ground in the fall, thus reducing fuel costs and soil compaction, not to mention soil erosion. Instead, the fields are left untilled in the fall and worked up at the same time they are planted in the spring. I don't know if working the fields with a disk will eradicate these weeds, or if most farmers will have to apply a herbicide. Either way, I doubt most are too happy about these yellow "flowers" in their fields and are eager to get their real crops planted. 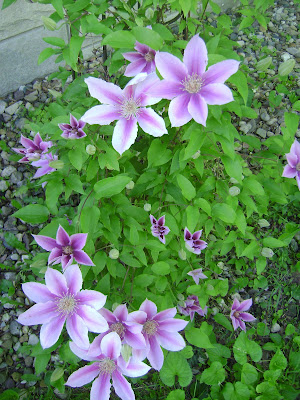 All the rain from the previous weeks has also made the flowers happy. Last Friday I posted the flowers that were blooming, saying I had lots of "almosts" in my garden. Just to prove my theory that the best blooms appear right after Garden Bloggers' Bloom Day, on Saturday the first clematis bloom appeared . . . and then another . . .and another. Above is just the bottom of my clematis; the top is smothered in blossoms, too. 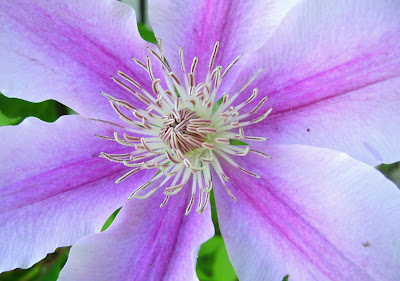 The rains finally subsided on Sunday, and so far it's been a glorious week without a rainy day in the forecast. I'm hoping it lasts even longer--I have lots of gardening to do!
For more ABC posts check out the ABC blog here.
Posted by Rose at 9:00 AM