I've noticed in the last few weeks a rather strange phenomenon--Blogger has been slowing down. No, I don't mean the entity "Blogger," but rather the blogging community itself. Some bloggers are not posting as frequently as they once were, or their posts are shorter than usual. Comments are fewer in number, not only on my blog but on others' as well, and some bloggers are making shorter, if any at all, replies to the comments received. 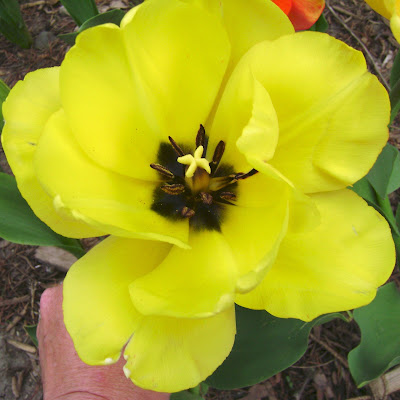 One of a collection of tulip bulbs called "Color Magic"

I have decided that such an anomaly is worth careful study. You may question the need for this, but a short time ago I received an e-mail from a graduate student asking me to participate in a research study on whether bloggers' personalities are reflected in their blogs. I didn't have time to respond to this study, but I think if this was a worthwhile research project, then a study of cutbacks in blogging is certainly just as worthwhile. 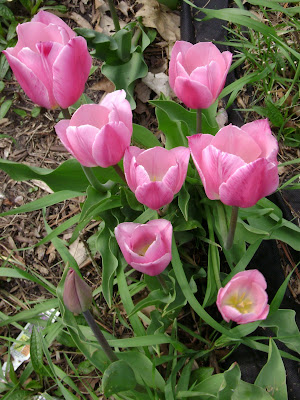 I have spent some time collecting data and analyzing it. After much study and careful review, the finished research project is ready for publication. In the spirit of patriotism and a concern over the current economic crisis, I am publishing my findings at no cost, thereby saving our government from another huge expenditure. For the sake of brevity, I will offer here just the salient points of the project. 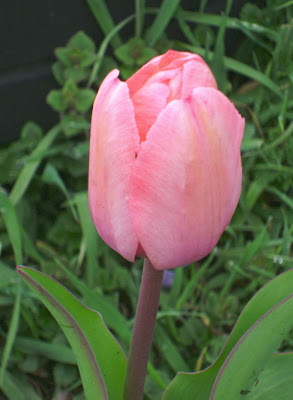 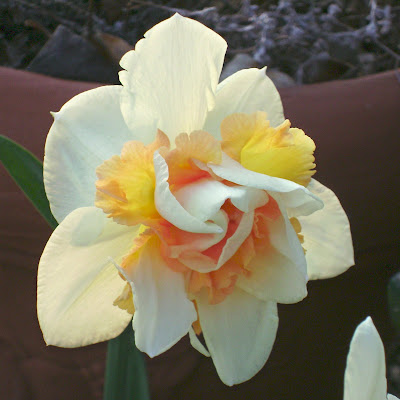 1. In any scientific study, factors which cause deviations from the norm must be identified and omitted before arriving at a general hypothesis. For example, some bloggers may be working extra hours at a job, or they may have family obligations that suddenly consume more of their time. Because this affects only a fraction of bloggers at any one time, this cause has been factored in as a standard deviation. 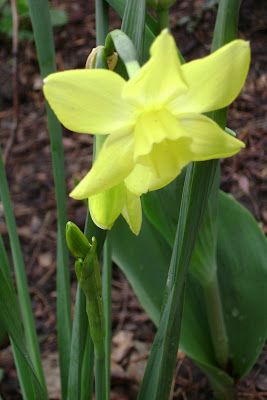 2. Other causes, however, affect the entire blogging population. On the Saturday preceding Easter as well as Easter Sunday, for example, blog posts were noticeably fewer in number. Of those posts appearing that weekend, many were pre-scheduled. Thus, one valid conclusion that might be reached is that on holidays, bloggers are too busy to read or write blog posts. 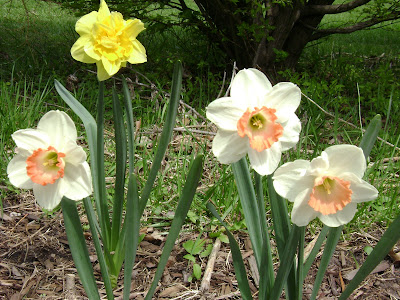 3. However, in order to determine a clearly identifiable cause for the general decrease in blogging in recent weeks, I had to use the scientific method. By reading many, many posts over this course of time, I made several noteworthy observations: 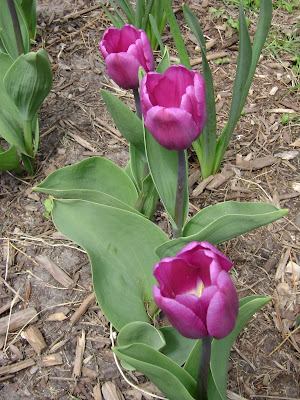 A.There have been many sunny days in the past three weeks. 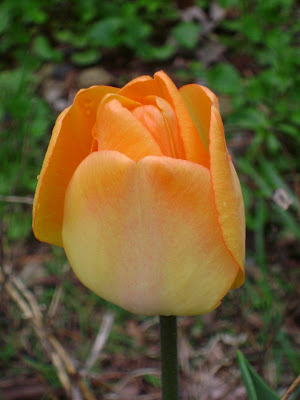 B. Temperatures are rising. 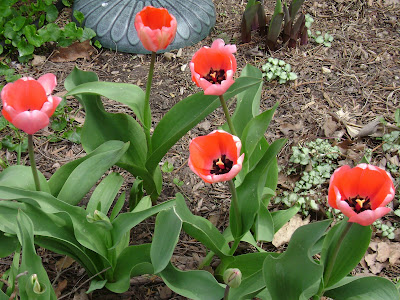 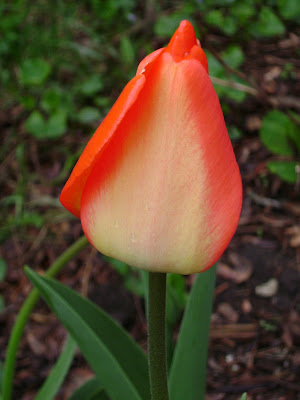 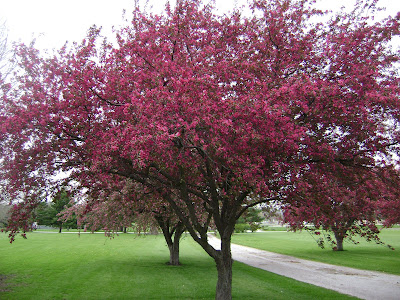 E. It is time to plant vegetables, trees, shrubs, and in some cases, perennials. 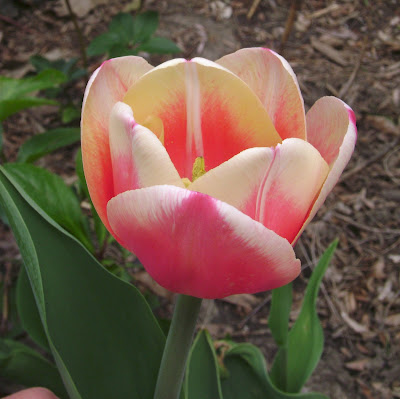 F. I also noted that one blogger even has added a note to her comment box that she may not be able to respond to comments as frequently because she is spending as much time as possible in her garden. Of course, one person makes for a very small sampling, but it could be indicative of a more widespread attitude. 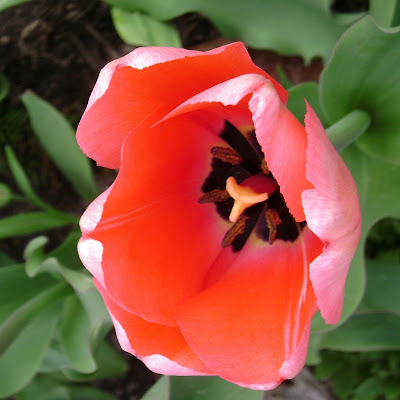 From all of these observations, I finally reached a hypothesis:
In the springtime, Garden bloggers would rather spend their time BEING in their gardens than reading about them. 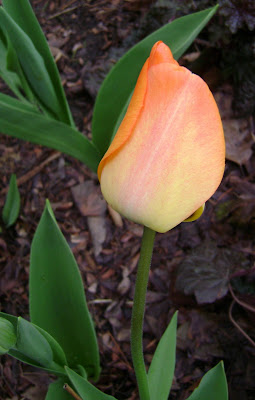 Almost ready to bloom--from a collection called "Monet"
Some may question the validity and reliability of this study, and I will freely admit that I am lacking any scientific background and that I have never taken a course in statistics. But I believe so strongly in this hypothesis that I am willing to conduct a second, more thorough study if warranted. While I would remain the head of this project, I could enlist more professional help. Youngest daughter works for a prestigious institute at the University and is experienced in setting up experiments and collecting data. Financial analyst Son and Senior Accountant Daughter-in-law could aid in interpreting data and compiling statistics. Of course, they would need some compensation; thus, expanding the research team would require some government funding; I think a mere $100,000 would be sufficient, though we might be able to make some cutbacks and shave off 10 or 20 thousand. 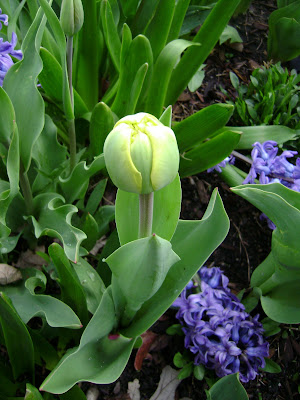 Still to open--"Sunrise"
If you believe that this is a crisis worthy of further study, I ask you to write your representatives in Congress and urge them to support funding for this project. People all over the world would benefit from the findings, as evidenced by the global nature of our blogrolls. I would start on a smaller scale and seek funding for a state-wide study instead, but unfortunately our former free-spending Governor Blago is no longer in office and is currently awaiting trial on corruption charges and also busy trying to land a role on a new reality TV show. Our new Governor is cutting all non-essential expenditures, so any funding for new research studies is doubtful. Thus, the need to go national.

Any feedback on this study is appreciated, but it may be some time before I can complete such a follow-up study. As further evidence to support my theory, rather than reading my regular blogs this morning or posting this earlier as intended, the sunny skies and temperatures soaring into the 80's today beckoned me into the garden instead. Future research may have to be delayed until a rainy day . . . 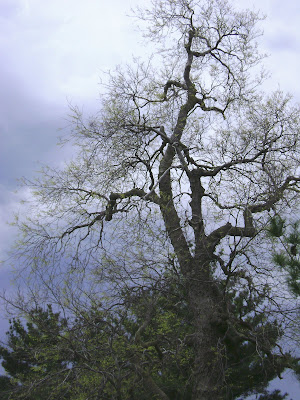 On a final note, I want to wish everyone a Happy Arbor Day! I am spending the evening with dear friends celebrating Arbor Day, as has been our tradition for more than 20 years. We'll toast our favorite trees, like the old hackberry above, and might even plant one as well.
Posted by Rose at 7:00 PM