On a cold and windy afternoon, this past Sunday, Beckie and I set out on one of our biggest gardening adventures so far. We drove north to visit the Chicago Flower and Garden Show, the first time we've ever attended this annual event. We decided to spend the night just south of the Windy City in order to have more time at the show on Monday. At my prompting, we took a commuter train into the city rather than fight the traffic or wander around looking for a parking place. To tell you the truth, another reason we chose not to drive in the city is because Beckie and I are known to often take the scenic route wherever we go--translate: we get lost a lot. 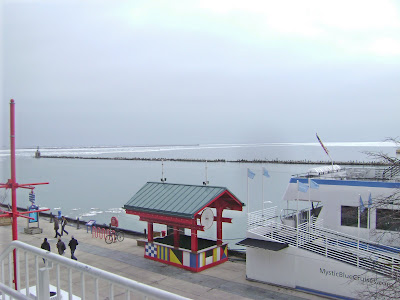 After a relaxing, conversation-filled 50 minute commute by train and a short hop on a city bus, we found ourselves at Navy Pier, the site of this year's Garden Show. This was our first ever visit to Navy Pier, a popular tourist stop with many activities for all ages and a great view of Lake Michigan. Navy Pier is a huge place, a fact we discovered as we walked and walked and walked to get to the far end of the complex where the Flower Show was held. There were a few shops and many small restaurants along the way, but the most interesting part of the walk was the Museum of Stained Glass which lines the wide hallway before the Festival Hall. Marvelling at the many beautiful works of glass took our minds off the long hike. (Later we discovered there is a trolley that stops at the front, the middle, and the end of the Pier. We took advantage of that when we left!) 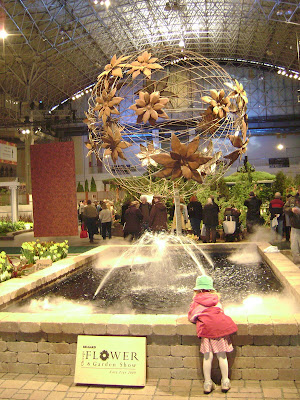 Finally, we arrived at the entrance to the Flower Show. We were fortunate that it was a Monday, because although there were quite a few people in attendance, we didn't have to fight the crowds that probably were there over the weekend. 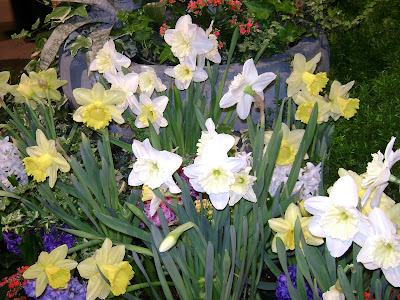 What a feast for the eyes! For a little while we could forget that it was only 40 degrees outside and that spring was still weeks away. Flowering spring bulbs were everywhere, from daffodils and tulips . . . 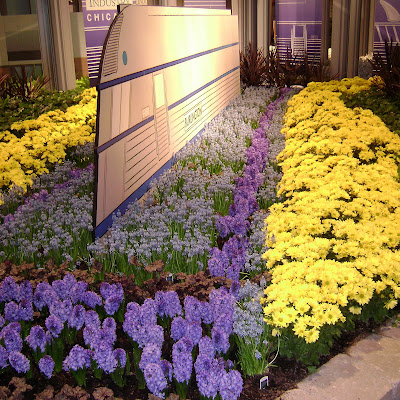 . . . to waves of hyacinths and muscari. 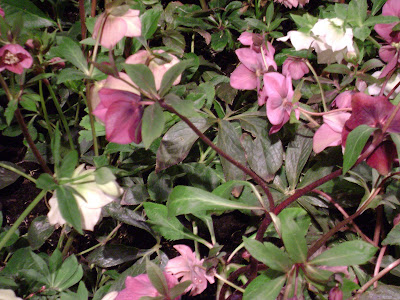 There were other spring flowers, too, including drifts of cyclamen and these hellebores. While we were enticed by new varieties of flowers, the real appeal of the show was in the many displays of sample gardens set up by various organizations. 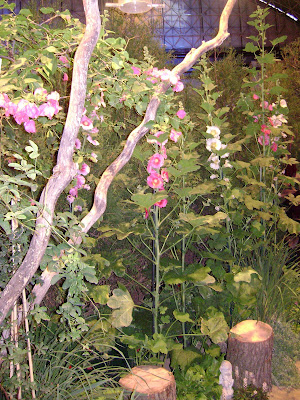 Garden Girl, Mr. McGregors Daughter, Beckie, and probably several others have already posted their take on the show, so I'll try not to repeat the same scenes here. One of the display gardens was called "America's Back Yard" where these familiar hollyhocks were tucked away in one corner. Every display garden was manned by at least one volunteer who eagerly answered any questions we might have about the plants or the design. 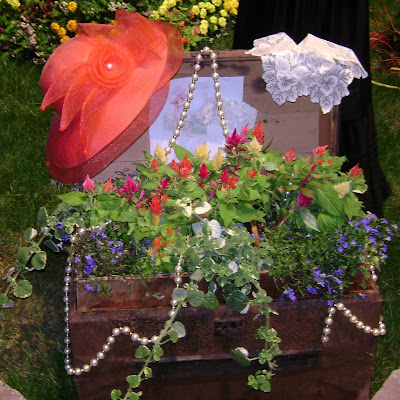 The Victorian Garden featured this antique wooden trunk filled with old-fashioned annuals. The bed in this scene featured a "bedspread" made completely with flowers; that can be seen on Beckie's post. 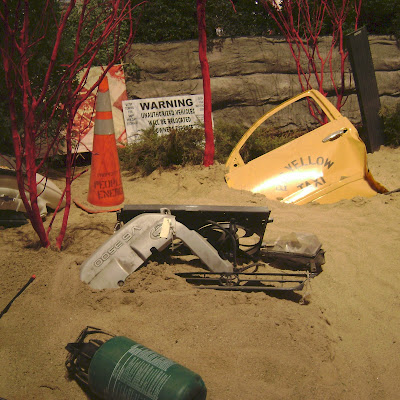 One display that apparently caught everyone's eye (also seen on Beckie's and Mr. McGregor's Daughter's posts) was this futuristic archeological dig. The title, "Paradise in a Parking Lot," and the idea for the yellow taxi door come from the familiar Joni Mitchell song:
. . . a big yellow taxi
Took away my old man
Don't it always seem to go
That you don't know what you've got
Till it's gone
They paved paradise
And put up a parking lot.

Now while you hum that tune, I'll explain a little more about the purpose of the display. Ironically, although the three of us all pictured this scene, the real garden lay behind this collection of 20th and 21st century artifacts. Designed by Community Gardens in the Parks volunteers, the garden made use of recycled materials and kites made by children in a local parks program. It was a great example of how an abandoned area can be reclaimed and turned into something beautiful. I believe this was the display where we were told that all the materials used in the garden would be placed in community parks throughout the city after the show. 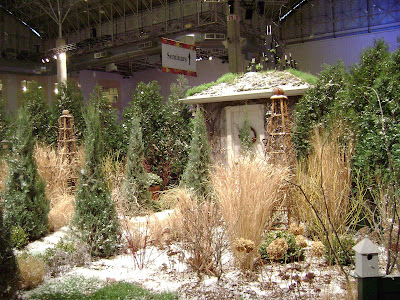 Another display I enjoyed was "Greening Up" which featured a circular garden showing each of the four seasons. Funny, but both Mr. McGregor's Daughter and I photographed the winter scene. I'm not sure why; perhaps it's because this is the most beautiful display of "winter interest" I've ever seen. 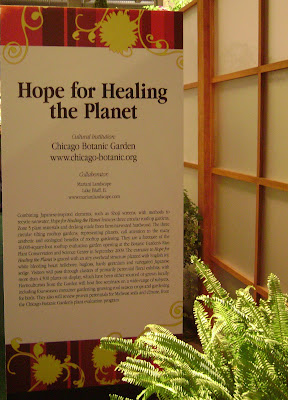 My favorite garden at the Show, though, was this one created by the Chicago Botanic Garden. It included three tilting rooftop gardens, which could be best viewed from the mezzanine. We didn't make it up the stairs, but there was enough on the main level to enjoy. 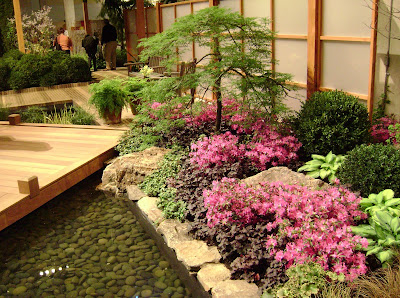 Although the focus was on recycling and eco-friendly design, it was the Japanese elements that appealed to me. There were all types of water features, Shoji screens, and of course the fitting Japanese maple. 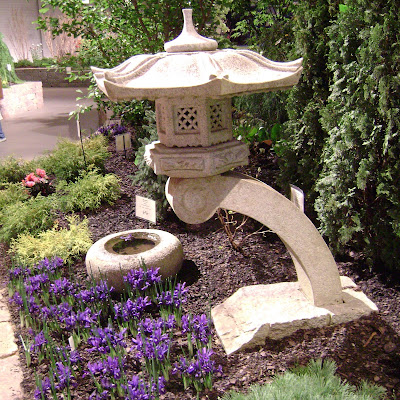 Asian-inspired garden sculptures added to the overall effect. I love Japanese gardens; they always seem so serene and soothing. 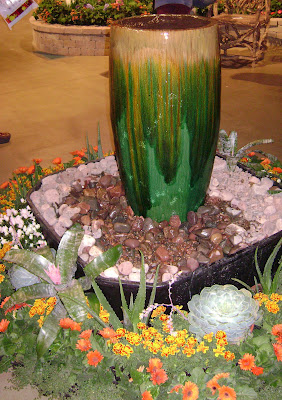 Throughout all the gardens, fountains were very popular, including this glazed ceramic small one. 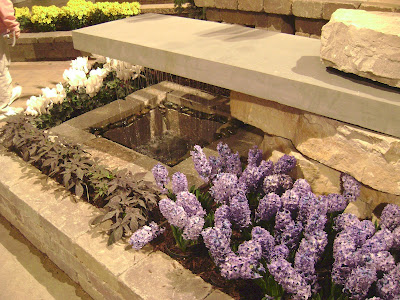 Others were more ornate like this stone fountain. I'm not sure, but if you enlarge the photo you might be able to see the water flowing from the long slab. 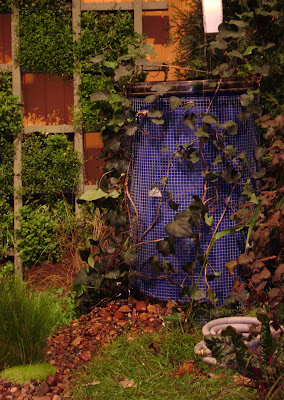 Although the theme of this year's show was "A World in Bloom," a common theme of all the gardens was sustainability. Rain barrels were popular from the vendors who sold them to this striking blue one included in a landscape. Notice the vertical planting behind it; these were popular in several displays as well. 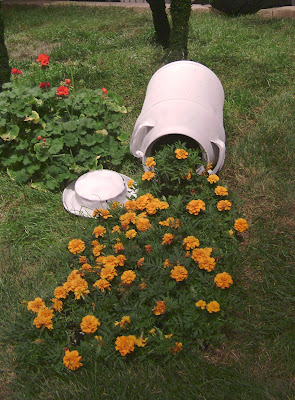 One of the best parts of a garden show for me is finding ideas that I can take home. I really liked this milk can on a sloping yard in the "America's Backyard" garden with marigolds spilling out of it. I have a couple of old milkcans at home; you might see something similar in my garden this summer.
With over 20 large gardens and many smaller displays, there was a lot to see at the show. There were also seminars throughout the day, but Beckie and I didn't make it to any of those. Had we been there on Saturday, however, we certainly would have made time to visit the Chicagoland gardeners' workshop on garden blogs. At one end of the exhibit hall was the "Garden Market" with over 100 booths for vendors displaying everything from books from the Chicago Botanic Garden's bookstore to every gardening gadget imaginable. I had no intention of buying too much other than some ShamWow! cloths (for Sophie, of course), but I wound up buying several things including some Dutch bulbs and a Cobrahead tool that should come in handy with the weeding this summer. 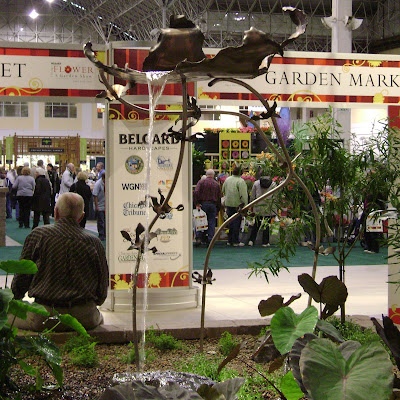 All in all, the show was well worth the visit, and Beckie and I had a great time. We "country girls" managed to navigate the Big City quite well, getting on the right trains going and coming. Other than gasping audibly when we were charged $3.00 for a single can of Pepsi, we felt pretty sophisticated. We arrived home very late Monday night, tired but very pleased with the day's adventure.


* Just a little explanation of the title: sometime last summer Joey dubbed Beckie and me "Thelma and Louise" because we often posted some of our little adventures in viewing other gardens. We've taken a liking to those nicknames, although I assure you no person was harmed in this adventure, nor were any vehicles driven off a cliff:)
Posted by Rose at 4:15 PM