This week we have come to the letter T, which is perfect timing for my guest host today . . . 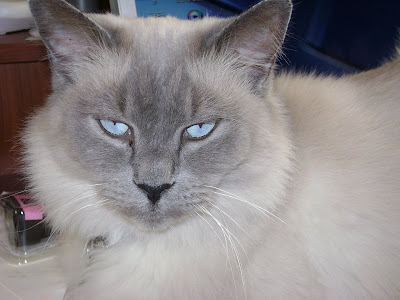 . . . Toby!
Good morning, everyone. Let me introduce myself; my name is Toby. The woman you know as Prairie Rose has asked me to fill in for her today as she is flying off to Phoenix, Arizona this afternoon to visit her daughter, my former personal assistant. I was more than happy to oblige as it has been some time since I have had access to this blog. Some of you may recall that I wrote a previous post in June when the Woman was feeling rather harried. If you would like to know something of my life history, you may want to peruse that article; otherwise, I will not bore you today with redundant details of my personal background.

The Woman will not return home for a week, and during her absence she has asked me to assume responsibility for running the household here. A wise choice, I believe, as the Man is rather lax about household duties, and the Young Woman who also lives here has no concept of them whatsoever. The Woman has tidied up and assured that all was in proper order before leaving, fortunately, including taking a few photographs of yours truly to illustrate this article. 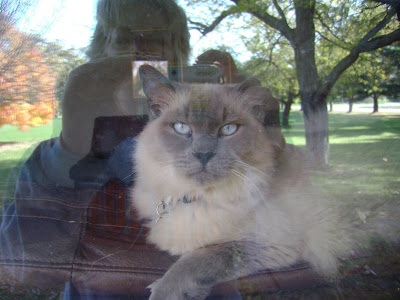 I must admit this is a rather flattering portrait; however, I have tactfully suggested to the Woman that she enroll in a photography class to understand the concept of reflection through a window.
During the Woman's absence my major duty will be to supervise the Man and instruct him in proper methods as necessary. Laundry is not a cumbersome chore here, but nevertheless I no doubt will have to assist the Man in the proper settings of the laundering appliances. 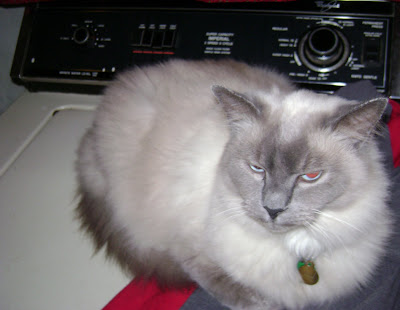 Usually the Man depends on the Woman for instructions on the rare occasions he uses these appliances. Apparently, the Man was discharged from this duty some time before my arrival at the household. I prefer not to spread unsubstantiated stories, but I did overhear the Woman conversing one day that this dismissal had something to do with "shrinkage" and an occasion when "white underwear turned pink."

While I do not cook, my services may be called upon in the kitchen as well. The Man is capable of opening cans of soup and pushing buttons on the microwave, but I may have to point out to him the storage place for my gourmet dinners. The Man will survive, but I certainly hope I do not have to dine on that rather bland concoction called "Meow Mix" the entire time the woman is gone. 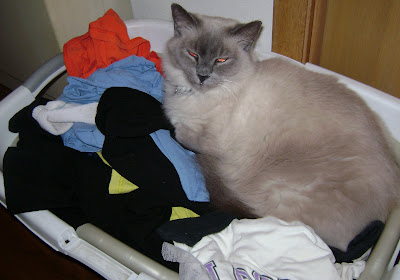 The Young Woman will need to be reminded of folding and storing her clean apparel. She has a rather nasty habit of taking clothes directly from the clothes basket to wear, or on occasion even buying new garments to replace ones she has misplaced. She will prove much more of a challenge than the Man. 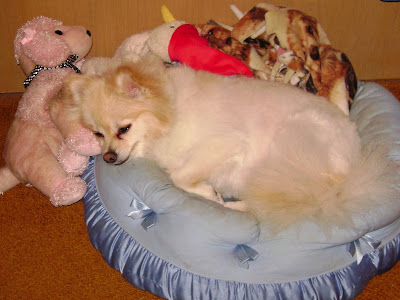 Another rather tedious task I may be called upon to perform is entertaining the Young Woman's pet, whom she aptly named Coconut. Although I enjoy my hours of solitude for quiet contemplation, the canine needs frequent human stimulation to avoid lethargy or worse yet, falling into periods of depression. Fortunately, he is easily amused and an occasional mindless game of tag with me will probably suffice. It is unfortunate that he does not have a higher intellectual capacity so that we could engage in something more mentally stimulating. Nonetheless, I have promised to assist in whatever way I can, and I am a man of my word. 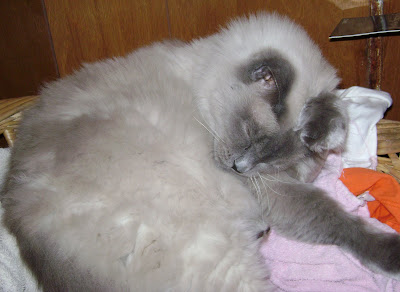 Egads, where did this photo come from? Does the Woman have no shame?! You would think a man could perform his toilette in privacy! Let us move on quickly... 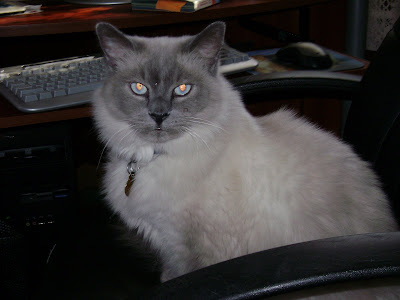 The Man may also require some technological assistance in using the computer. Although he is quite adept at playing various games of cards, he is completely illiterate in other software applications. Currently, he spends several hours each day perfecting his strategy at Solitaire, as he has been recuperating for several weeks from a foot injury. The Woman did repeatedly ask him to accompany her on this trip--as did the Young Woman--but I suspect that she is secretly glad to have some time away from him. Likewise, the Man, I believe, is happy to have some respite from the daily chore lists and constant reminders that the Woman gives him. 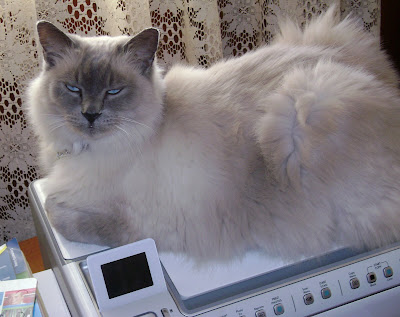 I doubt that the Man will have any occasion to use the printer/copier, but I am quite adept at using it if the need arises. The Woman was quite surprised when I demonstrated my capabilities for her one day; I think she frequently underestimates my mental capacity. 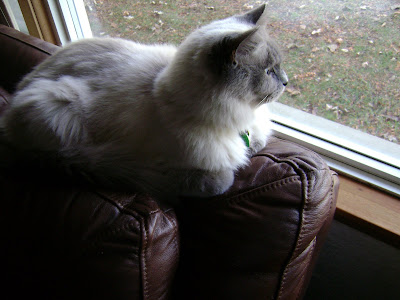 The extra duties that I must take on during this period should not be too time-consuming and should allow me adequate time for my usual pursuits. I enjoy bird-watching from my favorite easy chair and have spent many a pleasant afternoon engaged in this activity. The large picture window also affords the perfect view of the driveway: if by chance, a motor car with some of the young Humans who often visit here drives up the lane, I have ample time to retreat to one of my secret places of seclusion. The young Humans mean well, I suppose, but they tend to be a rather rambunctious lot that disturb my quiet repose. 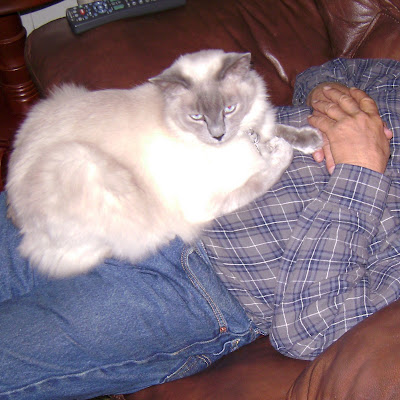 Evenings are often spent with the Man. A pre-dinner or post-dinner nap tends to aid in digestion, we have found. Afterwards, a few hours of television viewing often provide an entertaining diversion. I do hope the Man selects The History Channel or Discovery Channel; his predilection towards old Western movies or American football games are not quite my taste. However, either of those is preferable to the usual fare of "Law and Order" re-runs. One would think he would have memorized every episode by now.
Although I did state I would not discuss my background again, I did want to make one correction in my personal history. I erroneously stated in my last post that I was of Siamese heritage. However, a recent trip to the veteraniarian's office revealed that my heritage is actually Himalayan. This was a pleasant surprise. I am a faithful practitioner of the art of Zen, and I like to think that my ancestors may have preceded me in this pursuit, perhaps even studying at the feet of the Dalai Lama himself. 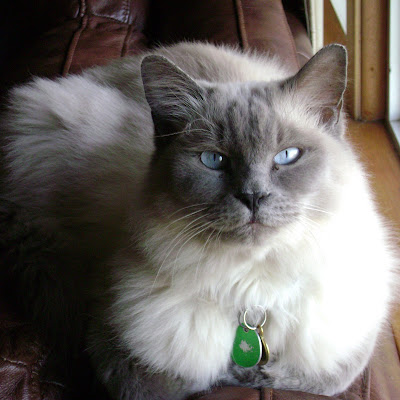 The week will go by quickly, and I am sure that all will go smoothly while the Woman is away. I am very pleased to have made your acquaintance and to have had this opportunity to spend some time with you through this enigma called cyberspace. Before I leave, the Woman has asked me to inform you that she may not be able to visit your journals while she is away, but she will catch up when she returns. I, in turn, will do my utmost to repond to all of your comments and queries if computer access and time allows.

Until we meet again . . .
Respectfully yours,