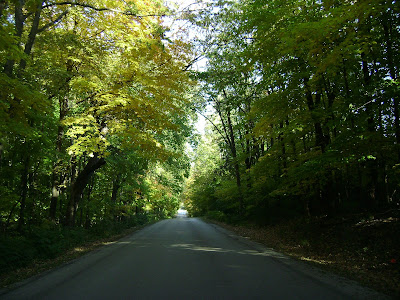 "How silently they tumble down
And come to rest upon the ground
To lay a carpet, rich and rare,
Beneath the trees without a care,
Content to sleep, their work well done,
Colors gleaming in the sun.

At other times, they wildly fly
Until they nearly reach the sky.
Twisting, turning through the air
Till all the trees stand stark and bare.
Exhausted, drop to earth below
To wait, like children, for the snow."
- Elsie N. Brady

Garden Muse Day is sponsored the first of each month by Carolyn Gail at Sweet Home and Garden Chicago. Visit her for more poetry about gardening today.

November always seems to me to be a wildly unpredictable month. Often times it is cold and rainy, other times the sun shines brightly through the newly bare trees. Many years the first snowfall has appeared by the end of the month. But right now as the new month opens, we have beautiful weather with the promise of warm temperatures for several more days. It is the perfect time to enjoy the last of the season's bright colors.

In early October I read about the Fall Color Project sponsored by Dave at the Home Garden to track the peak fall color around the country. I thought it sounded like a great idea and decided to participate. So for the last two weeks I have been snapping photos of the trees and colorful foliage in my yard, while waiting for the color to peak. The problem, though, was that while I waited for the maple tree to slowly turn completely orange, other trees had put on their autumn colors or none at all and then lost their leaves! Like Cindy at Walk Down the Garden Path, I think the peak has already past, so it is high time I show what colors we have had here in central Illinois. Unless otherwise noted, all photos are from my yard.

The pink and red flowering crabapples were the first to lose their leaves--in early September. But two weeks ago as I began observing the trees in detail for good photos, I spotted a few pink flutters in one of the trees. 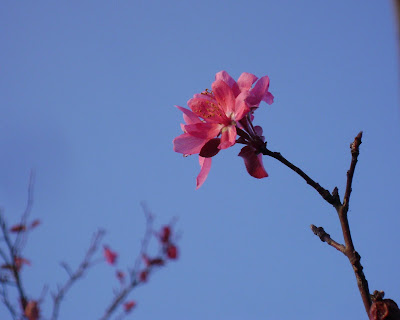 Moving in for a closer look, I saw this pink blossom in mid-October! I wonder if the summer-like weather we had for much of October confused them into thinking it was spring again.

The white crabapple became my favorite this summer with its canopy of white blossoms lasting into June. It was the favorite spot for the birds, too, especially a pair of cardinals, who probably had a nest here, judging by their actions. 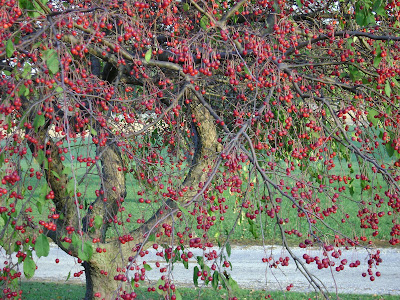 You can see the tree still has half its leaves, but what a show of berries! I have never seen this crabapple as loaded with its small fruit as this year. Wouldn't it be nice if they stayed here till Christmas?

One goal I had this summer was to identify all the trees in my yard. I discovered, though, that identifying a tree is not as simple as looking at just the leaves and finding them in a tree identification book. One must look at the bark, the shape of the twigs, the buds, and the fruit to make a positive i.d. Consequently, I still have some "mystery" trees. The tree below is not a mystery, but was a surprise to me--I didn't realize we had a second oak tree. It's not nearly as old as the big oak at the front of the yard--it's tall, but not very large in circumference. 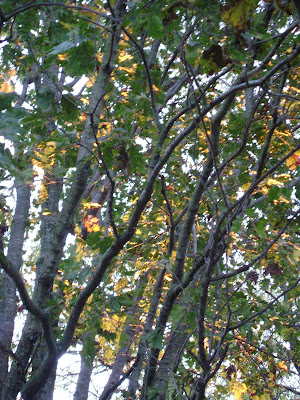 While some oaks put on quite a show of color in the fall, mine don't. The photo above looks deceiving. Although it appears many of the leaves have turned yellow, in reality the sun is illuminating the green leaves. Clicking on the photo to enlarge it may give you a truer picture. 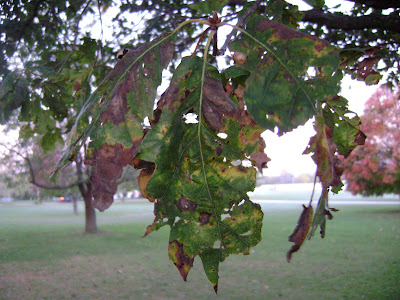 Both oak trees are still full of green leaves. The leaves don't turn yellow or even red, but gradually wither to a brown and fall off. Beautiful all the rest of the year, these are not fall showstoppers. 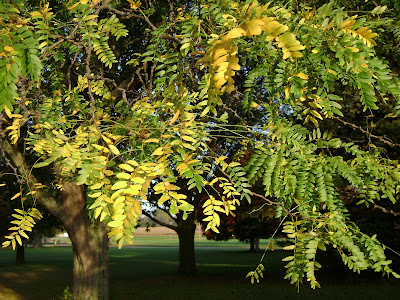 I think this tree above is a honey locust. We have a few of these in our yard as well; their leaves turn yellow before dropping to the ground. 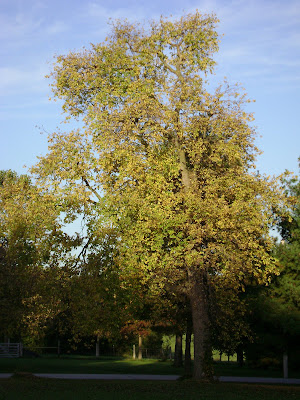 Near the roadside is what is probably the second oldest tree on our property, which my husband identified as a hackberry. Not a particularly shapely tree, it did put on a show of bright yellow, which I had trouble capturing in a photo. 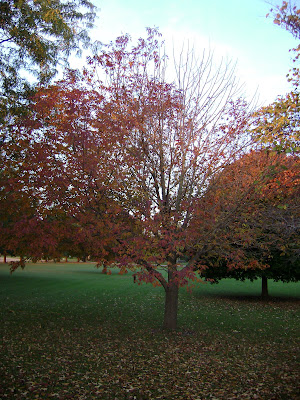 Here is my true mystery tree. I think it is a variety of ash, but I'm not sure. This picture was taken two weeks ago as its leaves began to turn to a dull reddish mauve. I waited for it to reach its peak color, but last Sunday strong winds came, and poof!--all the leaves were gone! 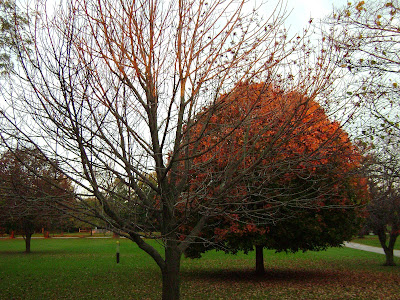 Sometimes it pays not to wait too long. At least I do have a good view of the main color in our yard--the bright maple behind it. The reason I'm still not sure about identifying this tree as an ash is because of what you can spot higher up in the branches, as seen below. 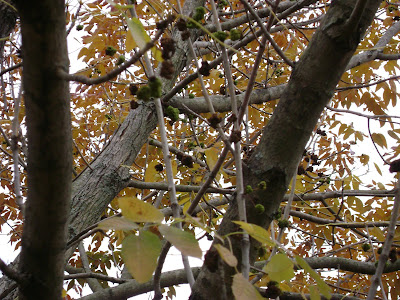 Small fuzzy brown "berries" hang from the higher branches and are still clinging, even now that the leaves have blown away. They are not nuts, but look like clusters of tiny pinecones. My tree book doesn't show anything like this for any of the ash trees. Any ideas on what type of tree it might be? 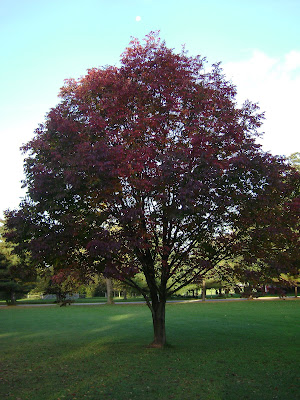 This tree, though, I am pretty certain is an ash. Located in the center of the front yard, its darker color adds some balance to the bright maple on the other side. 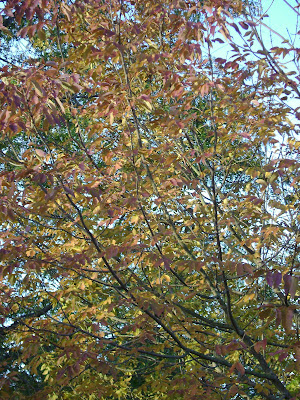 Two weeks ago the leaves were beginning to turn to a burgundy, and this week they were at their peak, as seen below. 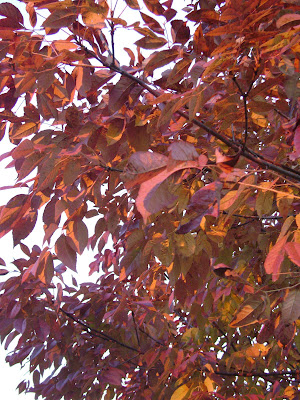 I took this photo just after sunrise, so the sun is playing tricks again in the photo, but trust me, they are a lovely shade of dark burgundy. 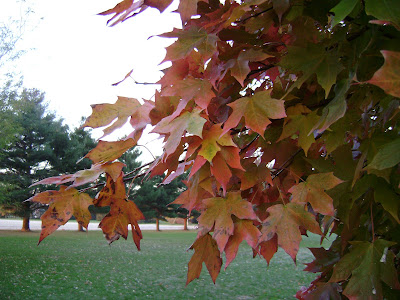 Of course, the most magnificent specimen of color in my yard this fall is the maple tree. I've already shown it in earlier posts, and you can see it hiding behind the "ash" in some of the photos above. It was interesting to watch this fall, as the leaves slowly turned, starting from the top of the tree and moving downward a little each day. I think it is at its peak now--the leaves that haven't turned a gorgeous shade of orange, red, or yellow are now a bright chartruese instead of green.

I had hoped to take a drive some time in the last two weeks to catch some of the fall color show in our area, but a few days of work, another round of the virus I had in September, and other commitments kept me too busy or too tired to take some time off. (And I have been a woman on a mission--planting all those bulbs I bought!) Yesterday, Beckie and I did take a drive to Springfield, about an hour and half drive from here, but we were on our way to see a specialist about her mysterious rash (hopefully, she will have some better news to share with you soon). We could only admire the trees as we sped down the highway, but it was obvious from the many bare trees we saw that the peak of color has indeed passed. 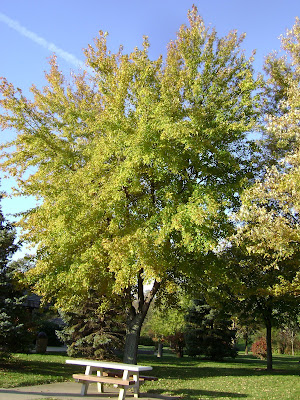 We did notice this bright chartreuse maple at a rest area, though. 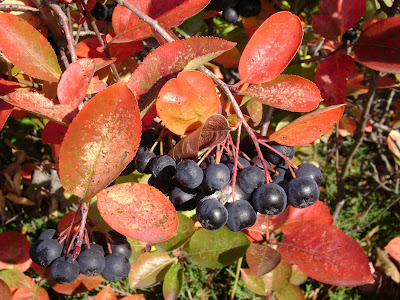 And, parking at the doctor's office, a row of bright reddish orange shrubs filled with berries lined the sidewalk. We weren't sure--are these viburnum? These berries were as large as grapes!

As I started to plan this post on Thursday, I decided I really needed some photos besides those of my yard. I didn't have time for a "real" drive, but thought I would take the long way home after some errands to try to find some broader views of color. I eventually found myself near Brownfield Woods, a preserve of native trees on the outskirts of Urbana, Illinois. The first photo of this post and the last one were both taken there. As you can see, while we have some spectacular specimens of color, the panoramic views are not as colorful. Perhaps it is the species of trees or perhaps because it was so warm here for so long, many of the trees have stayed green instead of turning.

I enjoyed the views of the woods, nevertheless, and found myself humming "Country Roads, take me home..." as I downloaded these two photos. Very appropriate, too, as I wound up getting lost in the country only 20 minutes from home! Although I eventually found my way, I realized an important rule for drivers: Don't get so entranced by the beautiful trees that you lose sight of the road you are on! 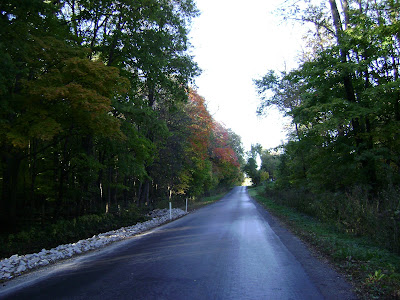 The true meaning of life is to plant trees,
under whose shade you do not expect to sit.
-Nelson Henderson