Baring My Soul (and Garden)

Now that summer is almost over, I have decided it's time for true confessions. Yes, I finally have gotten the courage to show you my "garden." First, let me say I never meant to mislead anyone: my header states that I am a "beginning gardener," and I have mentioned here and in comments that my "garden" should more accurately be described as a few flowerbeds. Even though I have been encouraged by others to show these flowerbeds before, I have hestitated for two reasons:
But after much soul-searching and inner debate, I realized that 1) There is no perfect bloom time for a garden. If all your flowers bloomed at the same time, then that would also mean there would be long periods of no blooms at all. And, 2.) I have found all of you to be the kindest, least judgmental people around--no matter what you might think of these flowerbeds, I realized you are not going to throw me out of the "Garden Bloggers Club."

So I sit here feeling as exposed as Jamie Curtis when she posed in her underwear without the benefit of airbrushing for a magazine spread some time ago. But here goes . . .

First, let me show you what I have to work with. This is the view from my small front porch where I enjoy my morning coffee watching the birds--especially the hummingbirds, who love to visit as long as I don't have a camera in hand:) 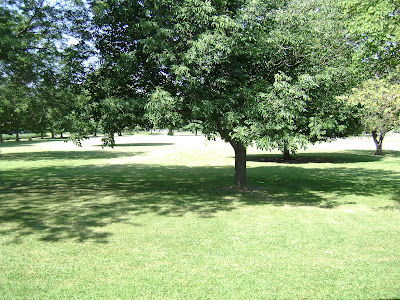 I am blessed with many lovely trees, but when we moved here four years ago there were just the trees and a few shrubs, not a flower in sight. The first area I planned to tackle was this triangular area along the sidewalk leading from the driveway to the front door. I wish I had "before" pictures to show you, but I don't, so you'll just have to take my word for how much work I had to do to create this flowerbed. You may notice a familiar sight reminiscent of Mr. McGregor's Daughter's "green moustache"--the overgrown yews at the back of this area. I thought I had convinced Husband, aka Mr. Procrastinator, to pull them out the first spring, but he backed down. I'm tempted to take a chainsaw to them myself, if I wasn't afraid of lopping off a few fingers in the process.

But these green monsters were not my first concern. This area was completely covered with landscape rock, so the first order of business was to remove all the rock. I removed many shovelfuls in the fall and then started again in the spring. After removing the top layer of rock, I discovered that underneath was even more rock! I am not exaggerating when I say the rock was at least 6 inches deep. I shoveled, picked, and sifted through the rock and soil until I got down to the clay underneath. As the first of May grew near, I finally broke down and asked my husband for help; he used a loader on a small tractor to scrape up most of the remaining rock--along with some soil and the tulips I had planted the previous fall. Finally, I could prepare this bed for planting--it took 1800 pounds of topsoil to completely cover it!

That first spring I started with a design for part of the flowerbed: Russian sage in the back, the Knockout roses I had been given as a gift the previous summer and transplanted hastily in the rocky soil when we moved, "Autumn Joy" sedum in front of those, and the salvias "May Night" and "East Friesland" in front of the sedum. I put this antique buggy seat which belonged to my mother-in-law and two containers for annuals in the middle of the bed as a focal point--and to fill up some space! I remember planting some daisies and a few other small perennials that lasted only the first season. I added quite a few annuals, but I still had quite a bit of empty space. 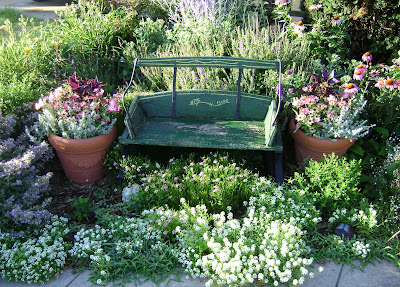 In Year Two of the flowerbed the design I had in mind got tossed out, and I planted what I liked regardless of how they fit in--some coneflowers at the back, a baby's breath plant, a threadleaf coreopsis and a nepeta. And more annuals to fill in the empty spaces . . . By the end of that summer, the perennials were thriving and growing beyond their alloted spaces, and I decided I needed to give some of them more room. So on a warm day in early April of Year Three of the "garden," I dug up most of the original perennials except for the Russian sage, and moved them all forward. The next day, we had a hard freeze, and I was sure I killed them all. Fortunately, they survived, although the one Knockout Rose has never been quite the same . . . That summer I added the asters and a new nepeta to replace the first one which mysteriously died.

This brings us to this year--Year Four of the original flowerbed. This year I added three small Monardas, "Petite Delight," which have yet to bloom, but that was all! I have finally achieved one goal--the whole flowerbed is filled with perennials, except for the container plantings and the alyssum bordering the sidewalk, although some of those were the results of self-seeding last year. It does look like a jungle, though, doesn't it? I keep studying it and thinking what I might remove to make it look more orderly. I haven't decided yet, but there is one important lesson I have learned from this experience:
When the tag on a perennial says to allow 24" for spacing between plants . . . .
Pay attention!! 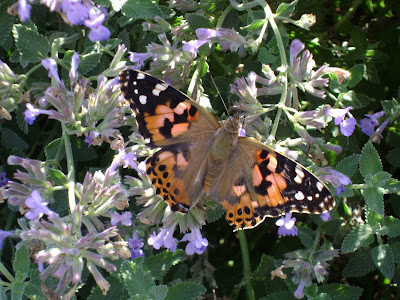 Here's a photo of a lovely Red Admiral to cleanse your palate . . . Think what you will about my haphazard plantings, this flowerbed has been a haven to bees and butterflies alike this summer.

Now let's move on to what I loosely call "the shade garden." 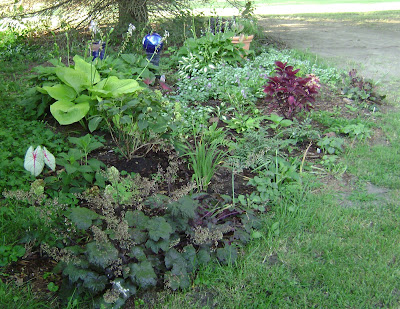 Oh my, this really looks pathetic . . . In taking these photos I learned an elementary lesson in photography: landscape photos don't show true perception. This flowerbed is really much larger than it appears.
I won't bore you with as many details about this area as with the first, but I do want to give just a little background. This was actually the first flowerbed I dug up, one without any rocks, fortunately! I had just planted a small shady flowerbed at our former house the spring before we moved, and I didn't want to give up those plants, especially the new hydrangeas I had bought. So that fall I hastily dug up a small area near a large evergreen at the front of the house and transplanted as many shade plants as I could. Other than adding a few more plants the last few years I did nothing to this area until last fall. At that time, I dug up more soil, expanding the flowerbed to at least twice its previous size. I've added quite a few hostas, heucheras, and other perennials this year, but there still is plenty of space for additional plantings next spring. I did learn my lesson from the main flowerbed and plan to give these perennials some room to grow. This area is definitely still a work in progress, which explains why there is no edging in front of the bed. My husband is debating about removing the evergreen, which was planted too close to the house. So I may expand this flowerbed to the back, or I may continue digging up more grass in front. We'll see . . .

Finally, the third flowerbed, which I usually refer to as the roadside bed. I've shown you most of the plants in this area before. Two years ago I decided I wanted to plant some flowers in front of these burning bushes near the road where everyone could see them. Again, I started out small, though when you're trying to till up a grassy area with a large tiller, it seems much bigger than it really is! I kept this area simple, with daylilies, coneflowers, and the annual salvia "Victoria Blue." 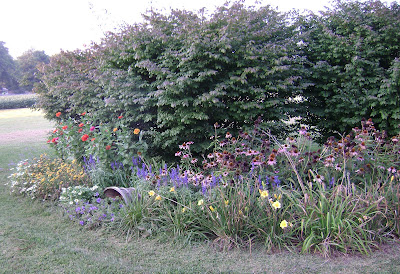 This area had been pasture for many years before it was left as a lawn, so the soil was wonderfully rich black dirt. All the flowers planted here have thrived, but I still wasn't completely satisfied with this bed, because it seemed too small for the visual effect I wanted. So this spring, I expanded it, too, so that it stretched across in front of all the burning bushes. 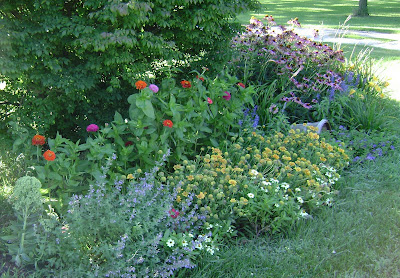 Next spring I'll put some finishing touches on it and move some of the daylilies, but I doubt that I will expand it too much--I have to leave enough room for Husband, also aka Mr. Mowerman, to get around it without lopping off any blossoms. 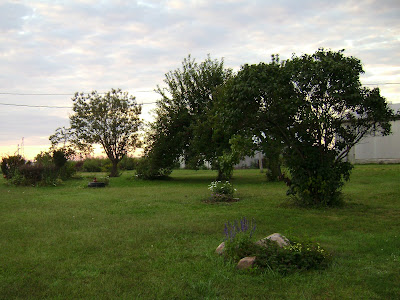 That's it for the main flowerbeds, but I do have some other plantings as well. Above is what I sometimes call "the back forty," which, of course, is nowhere near forty acres. It's a circular yard near the farm buildings where the old farmhouse once stood. Here is where I've planted my vegetable garden (not shown here--I have to draw the line at total humiliation somewhere); the apple trees, a lilac bush, and the hollyhocks also are in this area. This is where I plant a passalong plant when I don't know where else to put it; as a result, there are random plantings of irises, daylilies, and an area of plants known to "spread freely."
I also have quite a few container plantings placed all around the house as well this built-in planter on the front porch, where the sweet potato vine "Marguarite" threatens to engulf anything in its way. 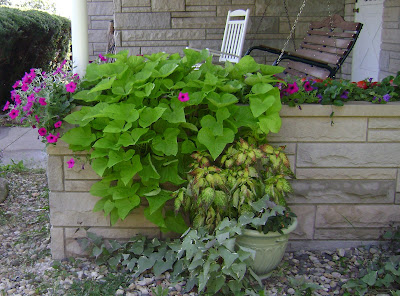