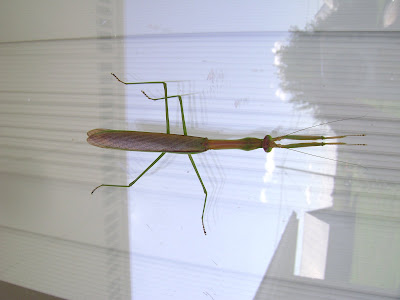 If you have been reading some of my earlier posts, you know that one of the changes in myself I've noticed since I began reading gardening blogs is an appreciation for insects. I've shown many insects from my garden in the last few months including an assassin bug, a mysterious beetle, cicadas, grasshoppers, and lots of bees. I've learned that insects aren't something you automatically squish with your shoe because they're "icky," but that most of them serve an important role in our ecosystem--well, maybe not Japanese beetles; they deserve to be squished!

This summer I have noticed in particular a large number of praying mantises. Normally, I might see one or two all summer, but this year I have seen at least a couple dozen in shades of brown or green and of all sizes. The fellow in the top photo appeared on my patio door yesterday. Stretched out as he was, he was at least six inches long! (And yes, if you think the photo is sideways--it is. The computer is in the shop, and I still haven't figured out a photo editing program on this computer that takes less than an hour to load!) 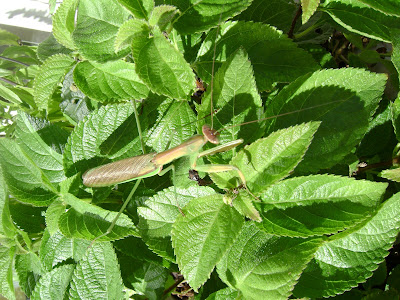 I decided he was better off amongst the plants, so I carefully removed him and placed him on the container of lantana near the door. He wasn't too happy with the stick I used to dislodge him with, but was happy with his new resting place. 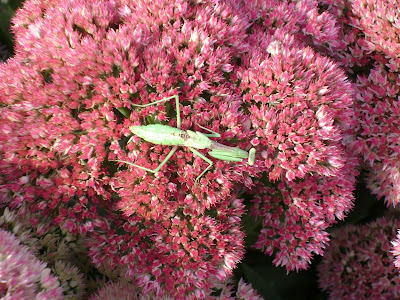 He makes this guy on the sedum look like a 98 pound weakling by comparison. Whatever their size or color, they are all welcome in my garden as they eat unwanted pests. However, my friend Beckie reported that she saw one yesterday devouring a butterfly in her garden--not so nice! And I have yet to see one try to eat a Japanese beetle. I guess they're not perfect. The mantis above apparently prefers smaller prey because he was sitting on the same plant as the lovely butterfly below. 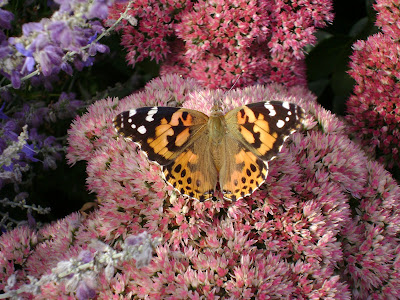 My favorite insect of all--the butterfly!

Today is the birthday of a special person, the best friend a girl could have. Drop over at Dragonflycorner and wish Beckie a happy birthday!

And tomorrow marks the 27th anniversary of the arrival of our third bundle of joy, our first daughter. Always energetic and smiling as a baby, she grew into a beautiful, talented and wonderful young lady who has made her parents very proud. Happy Birthday, dear Daughter!
Posted by Rose at 6:28 PM