Wildflower Wednesday on a Sunday

It's been a long time since I've participated in Wildflower Wednesday, almost a year in fact. But that doesn't mean I don't enjoy reading and learning about all the native plants that Gail and others post each month.  Actually, native plants and their importance to pollinators have been on my mind a lot this summer.  Last week I attended a workshop on "Pollinator Pockets," a program developed by our local Master Naturalists and Master Gardener programs to educate the community and encourage people to plant more pollinator-friendly plants.  It's a great program, and now I am officially trained as a Pollinator Pocket presenter, so I will share more about this program later--probably this winter, when I'm not knee-deep in weeding and dead-heading,

For today, though, let's look at a few of the natives blooming in my little butterfly garden, now officially designated as a "Pollinator Pocket." 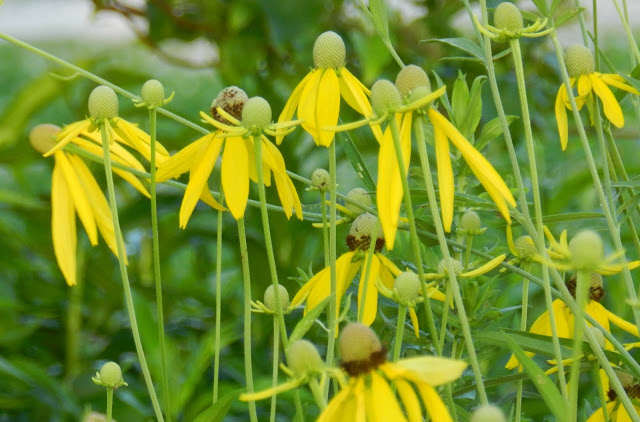 For the last few weeks, the gray-headed coneflowers, also known simply as yellow coneflowers, have been commanding attention in the Butterfly Garden as they sway in the breeze above the shorter natives.  Although they are called coneflowers, they are not an Echinacea at all, but belong to another genus Ratibida pinnata. 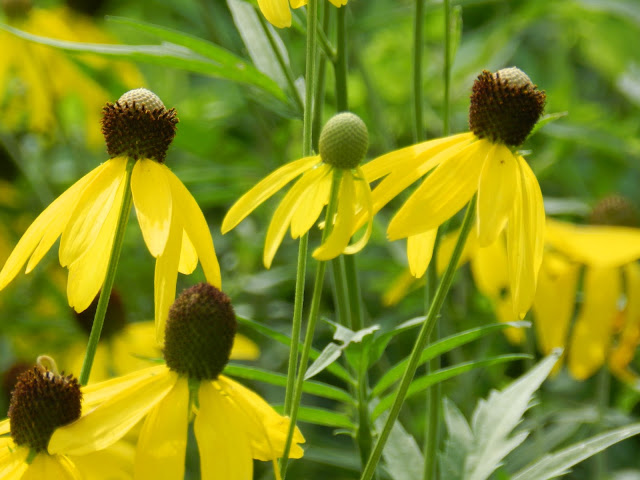 The drooping florets are topped by a head that initially is green/gray, but gradually turns brown.  I've found no info to support my theory, but it appears that the head slowly turns brown from the bottom up, kind of like a reverse balding process. 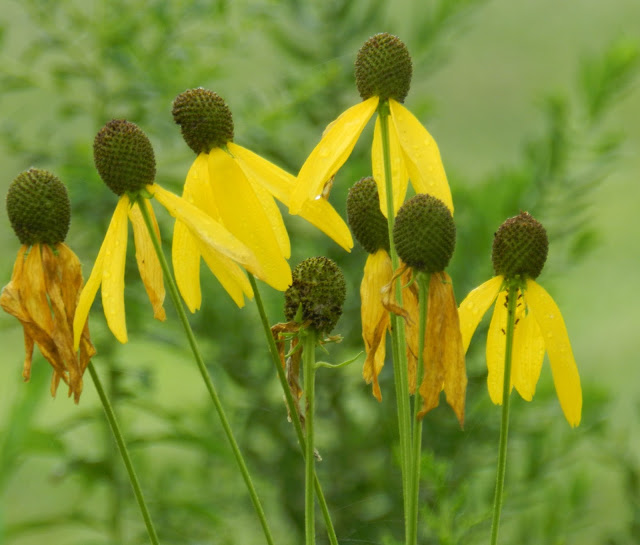 Growing up to four feet tall, the gray-headed coneflower is a common sight in many prairie plantings and is especially attractive to many species of bees.  It's easy to grow, adapting to many soil and moisture conditions, and--so far--doesn't seem to be an aggressive spreader. 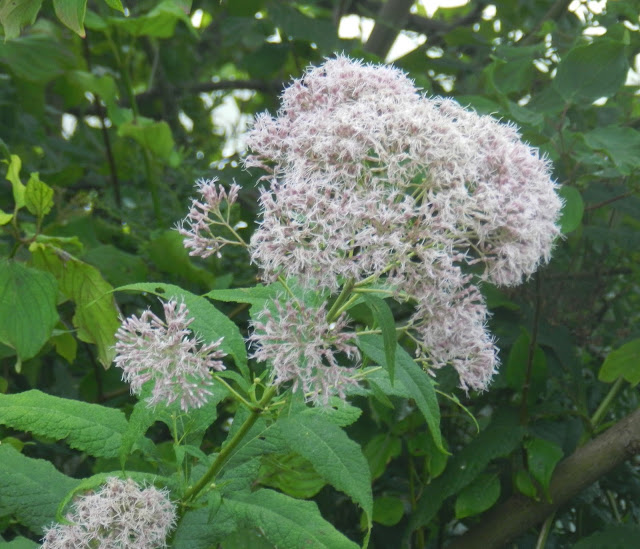 Another native blooming right now is Joe-Pye Weed,  Eutrochium spp.  Actually, I'm not sure what type of Joe-Pye weed this is; as I've mentioned before, mine looks quite different from most Joes I've seen in gardens.  The flowerheads are fluffier, the stems aren't purple, and well, frankly, it's not as pretty as other Joes.  I suspect it is a straight species of some type.  For a much more attractive plant, check out Gail's post featuring the Joe-Pye weed this WW. 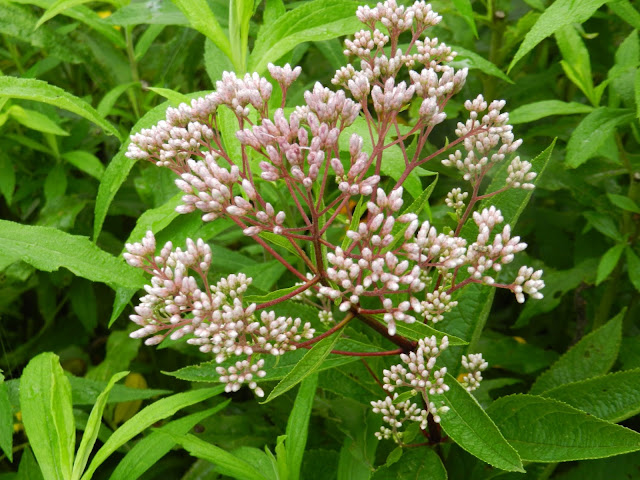 Joe-Pye weeds are such bee magnets, they are a great addition to any pollinator garden.  But for gardeners who don't have room for these 5-7' tall beauties, 'Little Joe' is an excellent alternative, growing only to 3-4 feet tall.  Notice the much prettier flowerhead on my 'Little Joe' and the purple stems compared to the tall one previously. 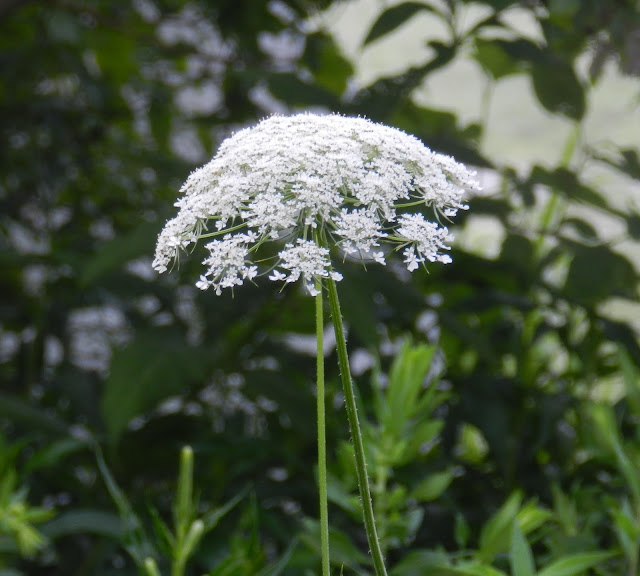 Every spring I weed and thin out the thugs in this area and plant some new seedlings, but after that, it's pretty much on its own.  So you never know what might pop up during the season.  Smack dab in the middle of the garden right now is this Queen Anne's Lace, Daucus Carota.  Many people think of this plant as a weed, but I've always had a special fondness for it and am happy to see it make an appearance this year.  For the past couple of weeks the roadsides have been lined with Queen Anne's Lace and Chicory, one of my favorite wildflower combos that always brings a smile to my face. 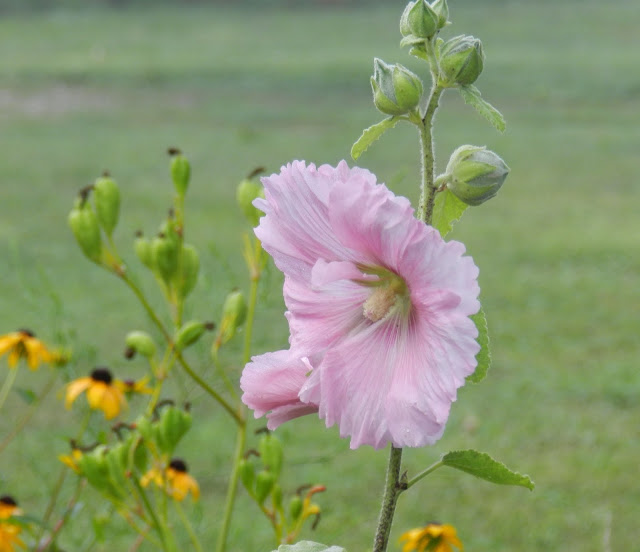 Another plant that popped up rather out of place is this hollyhock.  Once I had many hollyhocks, descendants of plants from my grandmother and my husband's grandfather.  But in recent years they have fallen victim to rust, so when a new plant springs up--no matter how out of place it might be--I let it grow, hoping I'll eventually get a healthy crop of them once again. 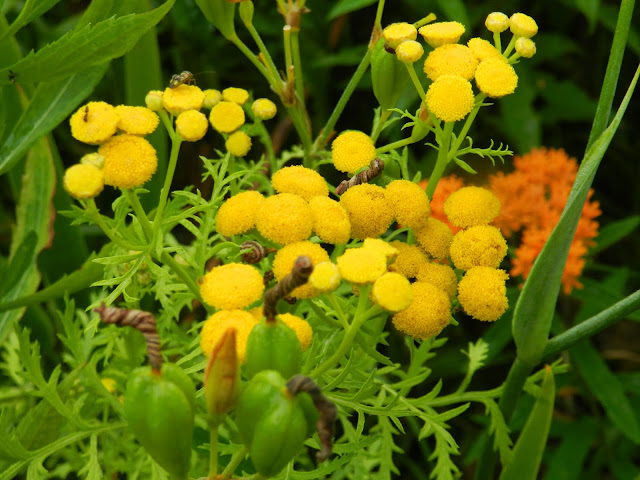 One plant that has really grown taller this year is Tansy, Tanacetum vulgare.  This is one of those plants I purchased at a gardener's plant sale without knowing much about it.  It's actually not a native, having been introduced from Europe many years ago, and can be invasive in some places.  But it does provide nectar and pollen for small bees, flies, and wasps, and I think the button-like flowerheads are kind of cool.  We'll see if it gets too aggressive in my garden--it will have to duke it out with the asters and goldenrod first.  Sticking up in the forefront of the photo are the seedheads of blackberry lilies, whose blooms faded before I ever got a chance to photograph them. 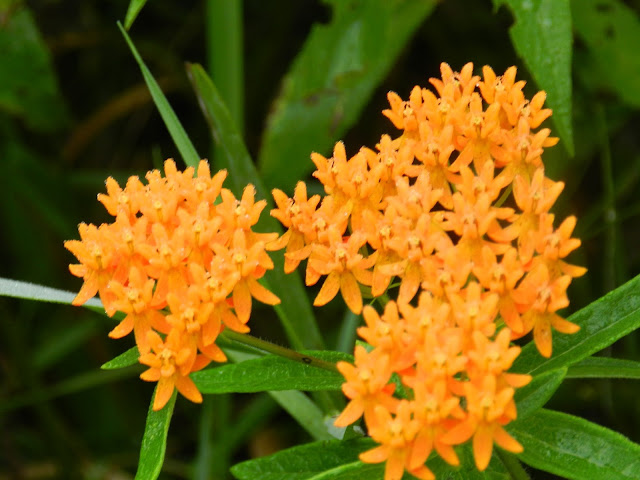 Peeking out behind the Tansy is the Butterfly Weed, Asclepias Tuberosa.  While I have trouble getting other milkweeds to grow here for some reason, Butterfly Weed has done well, though it takes time to get established. 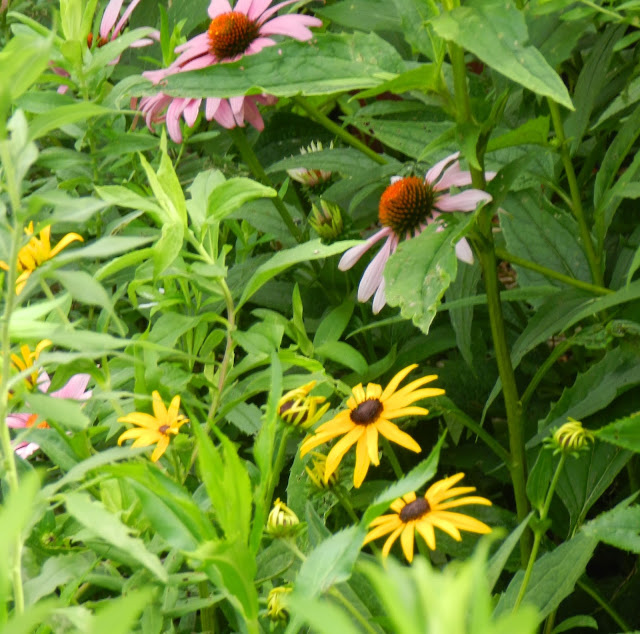 There are other plants blooming as well right now in the Butterfly Garden including a few coneflowers and Black-eyed Susans hiding out at the back. 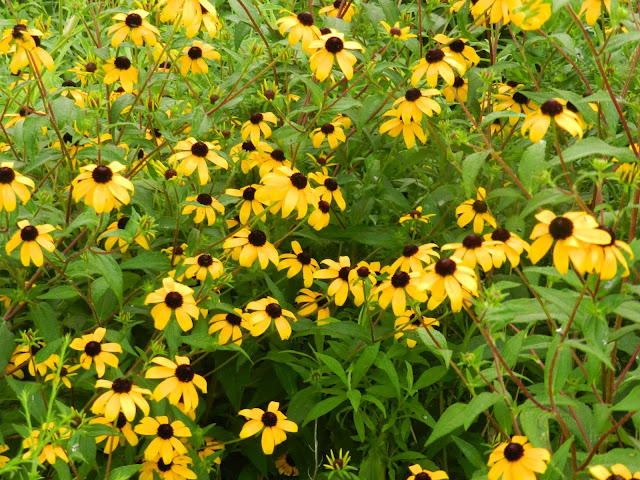 Not so shy, though, are the Brown-eyed Susans, Rudbeckia triloba, blooming along one edge of this flower bed.  This plant is not for the faint of heart or one with limited garden space.  The first year it mysteriously appeared here I had one plant, the next year two or three, and this year--well, let's just say, I did a lot of digging and sending perfectly robust plants to the compost pile. 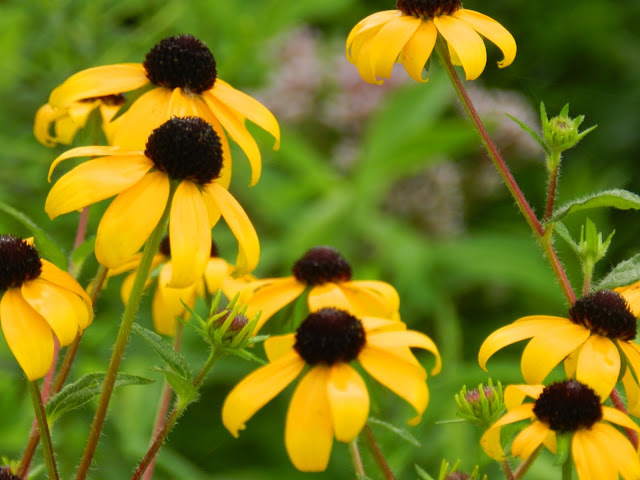 Still, these cheery blooms put on such a display late summer through fall that I just don't have the heart to eradicate them completely--as if I could:) 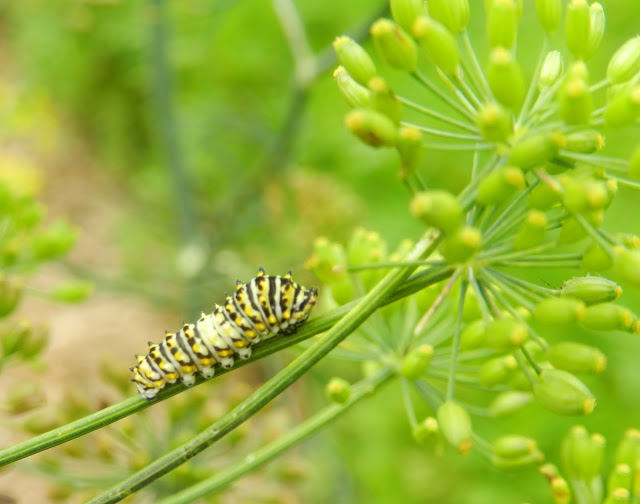 Native plants aren't the only choice if you are planting a pollinator-friendly garden.  Volunteer dill in the vegetable garden has been a tasty treat for some very hungry caterpillars. 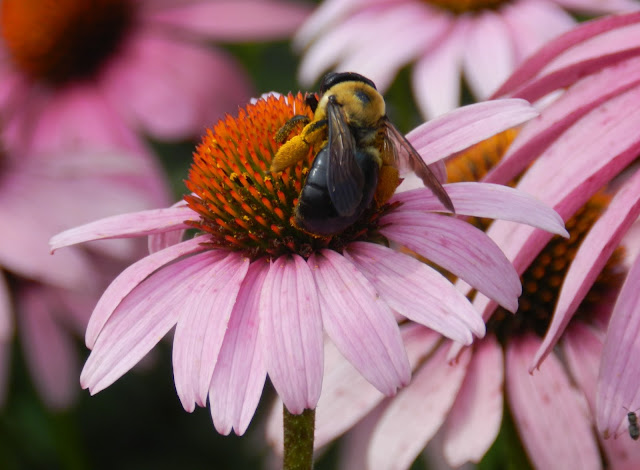 You know I couldn't write a post in July without just one more coneflower:)  If I had to choose one summer-blooming plant that attracted a host of pollinators, it would have to be purple coneflowers.  Butterflies and various bees including this very large bumble bee have been enjoying these flowers since they first began to bloom in late June.

Wildflower Wednesday is held the fourth Wednesday of every month, and anyone is welcome to join in.  Thanks to Gail for always being a great hostess and welcoming even those of us who are late to the party.
Posted by Rose at 1:49 PM