Every October, it seems, I get lulled into a sense of complacency.  Although the days are getting shorter, they are warm and sunny, making me think fall will go on forever, and I have all the time in the world to get all my fall clean-up done in the garden.  Instead of planting the bulbs that keep arriving on my doorstep, I spend my time watering, trying to keep a few new planted perennials and the fall mums alive.  I keep hoping for some rain--we haven't had any significant rainfall in over a month--so that I don't have to water, and so that I don't need a jackhammer to drill through the concrete-like soil to plant bulbs.  But time is running out--I know it, and the garden knows it.  Any day a frost could arrive, putting the garden into hibernation till spring. 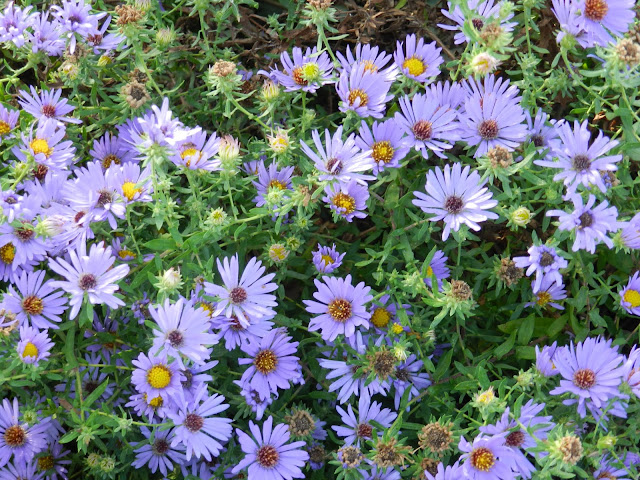 Although the growing season is winding down, there are a few new blooms since last month, surprisingly.  What would October be without 'October Skies' asters? I especially like these asters because they form nicely mounded masses of sky-blue blooms, perfect for the front of the arbor bed. 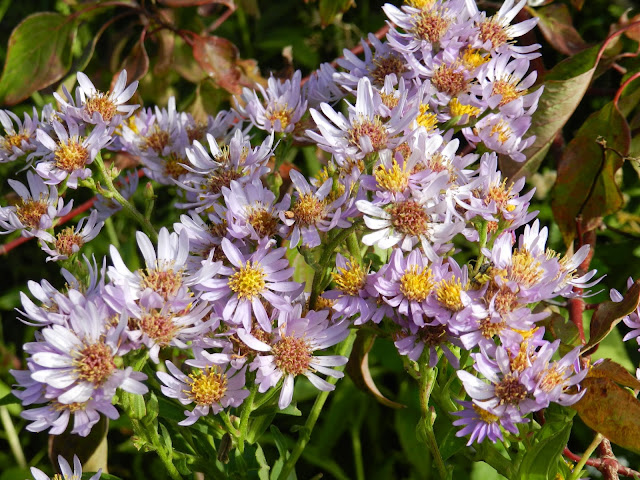 The butterfly garden is mostly green and brown these days now that the New England asters and goldenrod have stopped blooming.  But at the back of this area is a latecomer, Tatarian asters that mysteriously appeared here last here and happily have returned again. 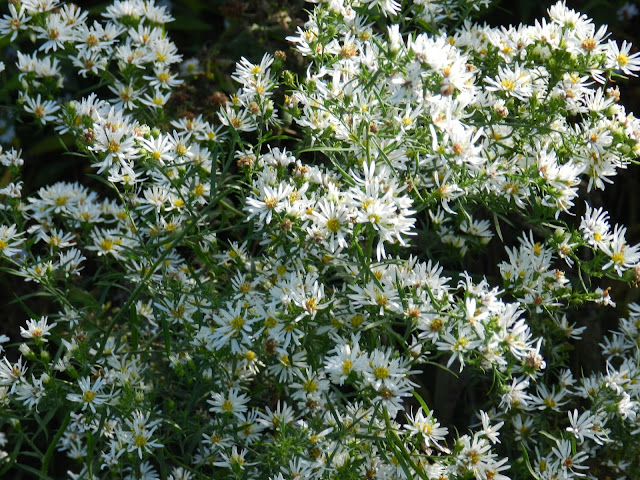 In the front of the butterfly garden, as well as several other places throughout the garden, Frost asters have burst into bloom in the last week or two.  While many may think of these as a weed, when they're in bloom, it's hard to think of them as anything but another pretty aster. 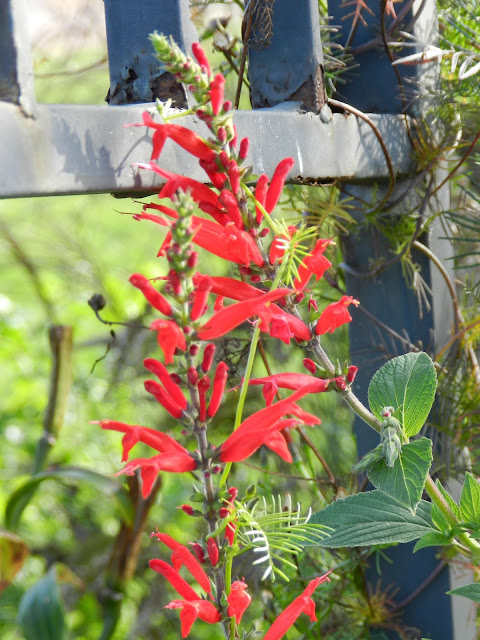 A new bloom this month that has me excited is the Pineapple Sage.  I usually plant one plant each spring, but in the past it has bloomed for a week at the most before getting zapped by the first frost.  This year, though, it bloomed early enough so that I have been enjoying it for a couple of weeks. 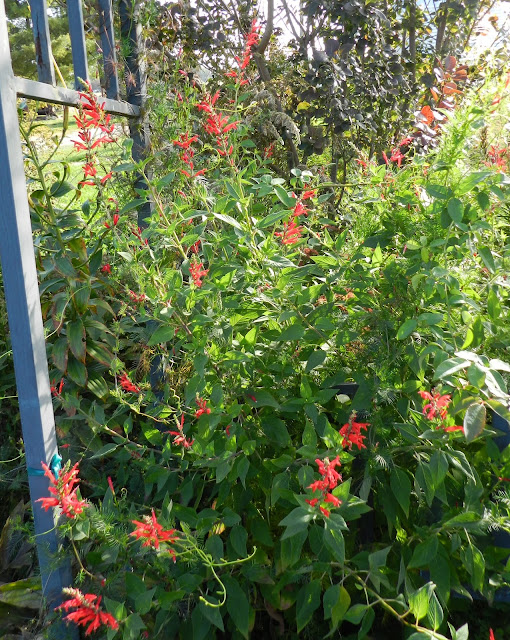 Not only has it put out numerous blooms, it's grown into quite a monster! 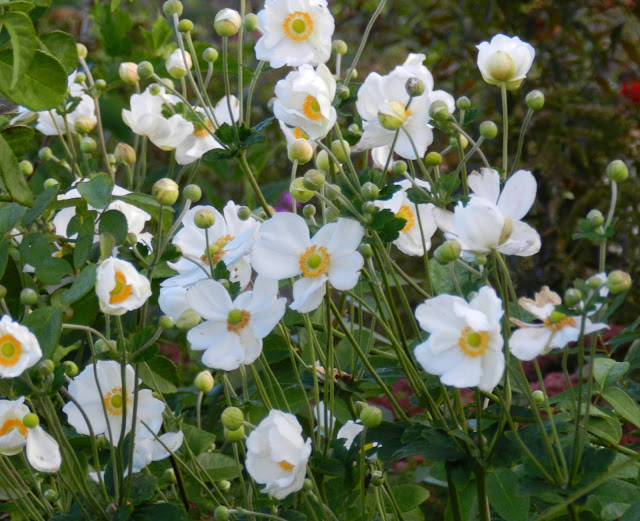 Also new since last month are the Japanese Anemones, which have actually been blooming for at least three weeks now.  It took a few years for this plant (now plants??) to get established, but once it did, it took off and now provides lots of lovely white flowers when the rest of the area is fading away.  I'm pretty sure this is 'Honorine Jobert.' 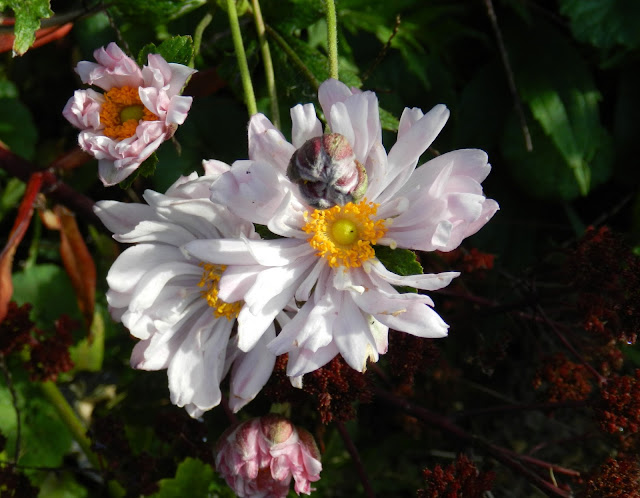 I have a pink Anemone, too, one I had forgotten I had planted. I don't remember the name for sure, but it may be 'Robustissima.'  It's a shorter variety, which in my garden means it gets lost among all its neighbors, including the dark burgundy sedum flopping to its right. 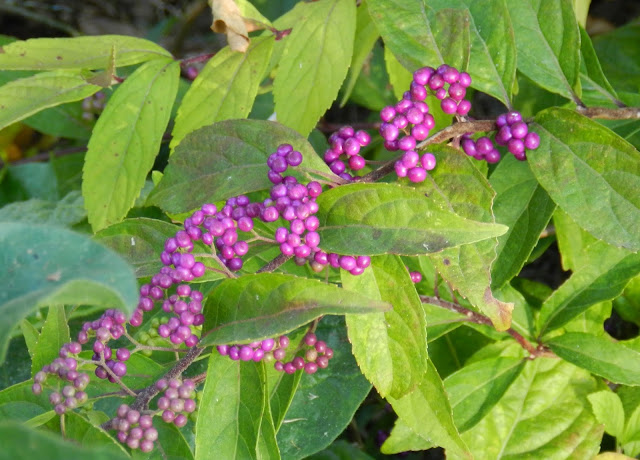 Not actually a bloom, but one of my favorite sights each fall is the Beautyberry covered in purple berries.  This year the berries are partially hidden by a tall switchgrass that I temporarily planted near it---one more plant that didn't get moved to a proper place this year, sigh. 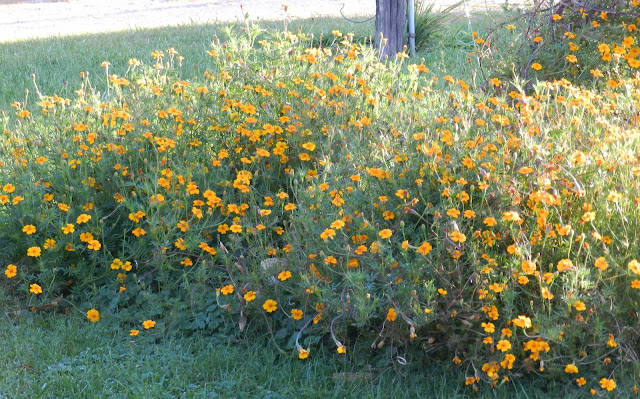 Everything else that is blooming has been around for awhile.  The 'Golden Guardian' marigolds at the front of the veggie bed are going crazy.  That's a good thing, because they're hiding the rest of this area that desperately needs some pulling of plants and cleaning up. 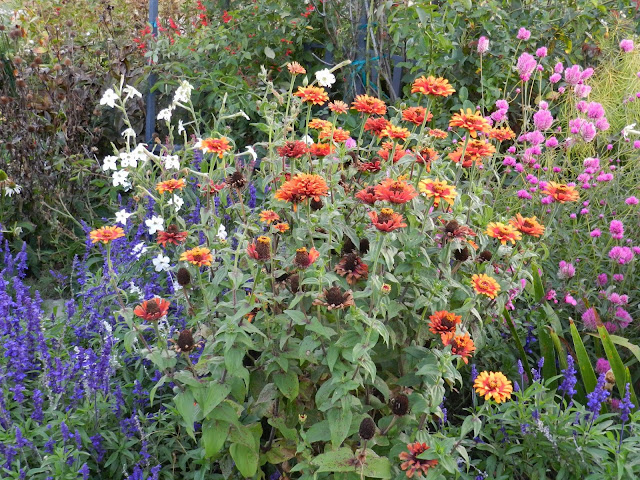 The Arbor Bed is pretty wild and crazy right now, too.  But this is the time of year when I appreciate all the annuals that are tough survivors, holding up in spite of no rain for what seems like forever and some serious neglect by the head gardener the last two months. Annual salvia, nicotania, zinnias, and gomphrena should keep on blooming right up until frost. 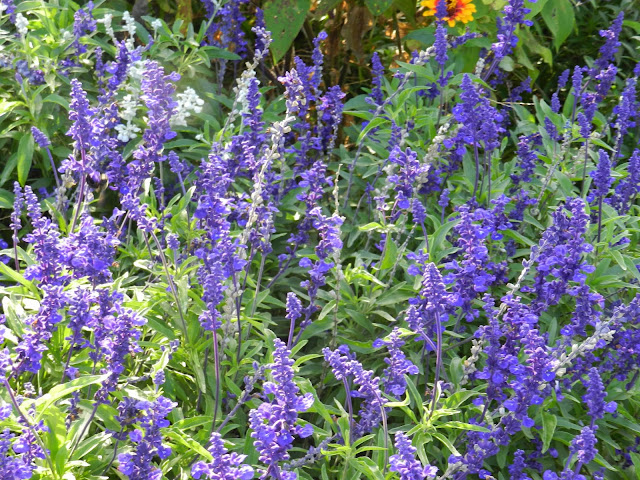 One of my long-time standbys, 'Victoria Blue' Salvia farinacea, can't be beat for a long-term bloom.  It will even stand up to a little frost. 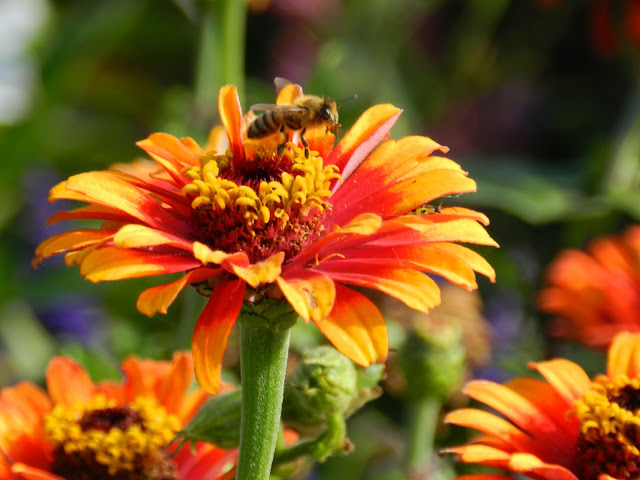 And of course, one of my very favorite annuals can't be overlooked this month--'Zowie Yellow Flame' zinnias still going strong and still attracting the pollinators.


I've not only bragged about this annual over and over again in this blog, but I also convinced my cohorts at the Nursing Home garden to plant some this year.  As you can see, they are doing well, and my fellow volunteers think I'm a genius:) 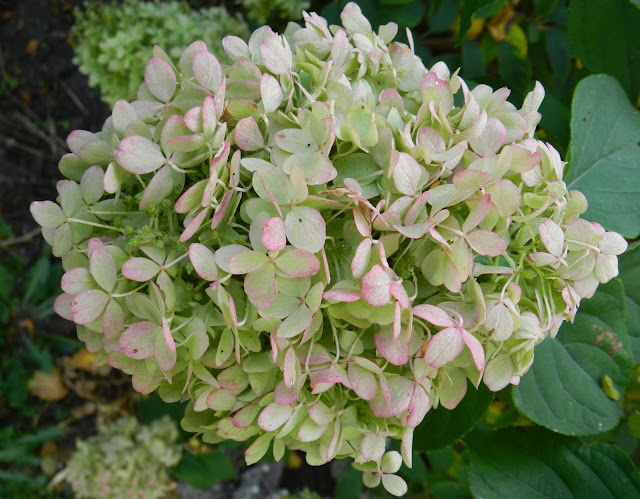 The trees are just beginning to turn in our area, but there are other signs of autumn everywhere.  'Limelight' hydrangea blooms are tinged now in pink. 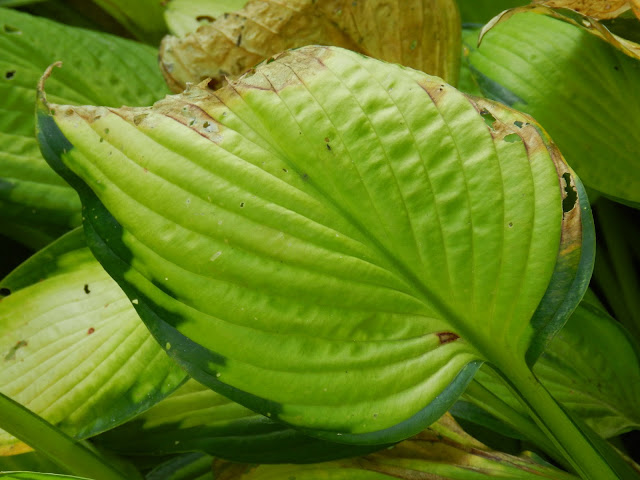 Hostas are turning yellow and crinkling up. 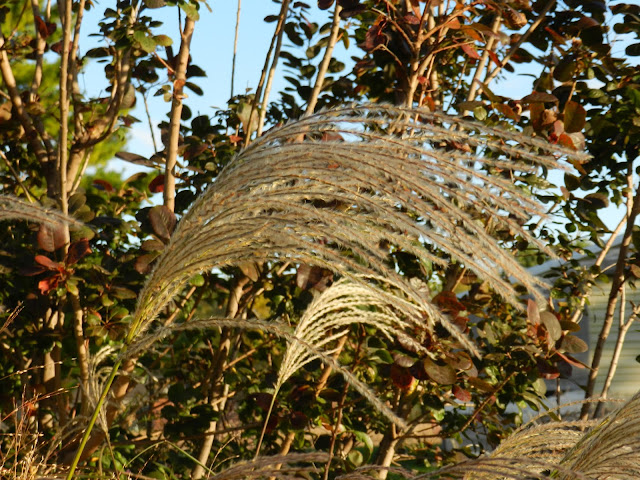 Ornamental grasses are swaying with the autumn winds. 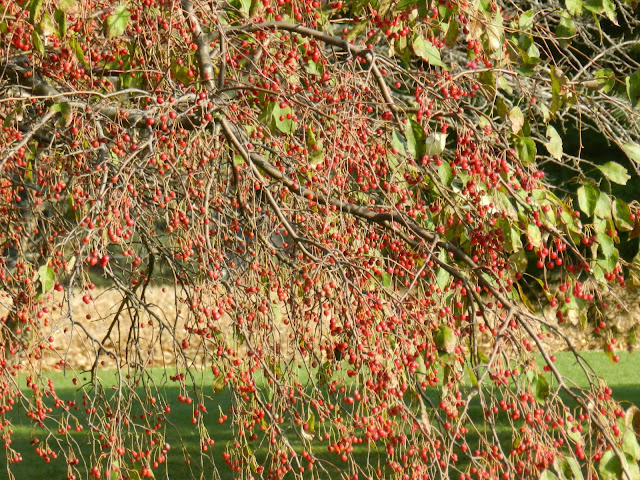 The white crabapple is loaded with fruit--the birds make short work of these once it turns cooler. 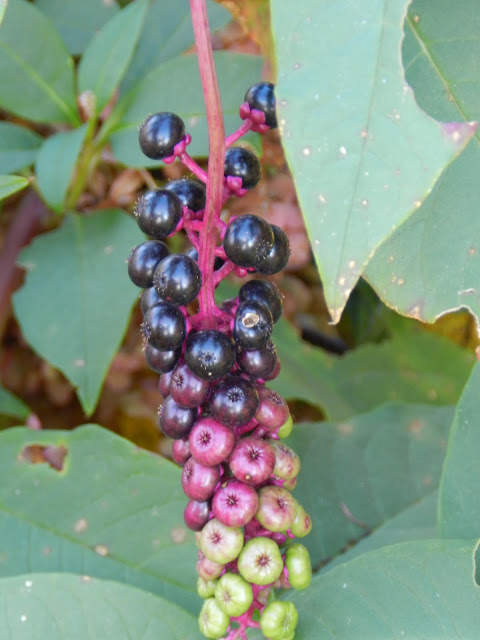 Pokeberries are turning a deep purple at last. 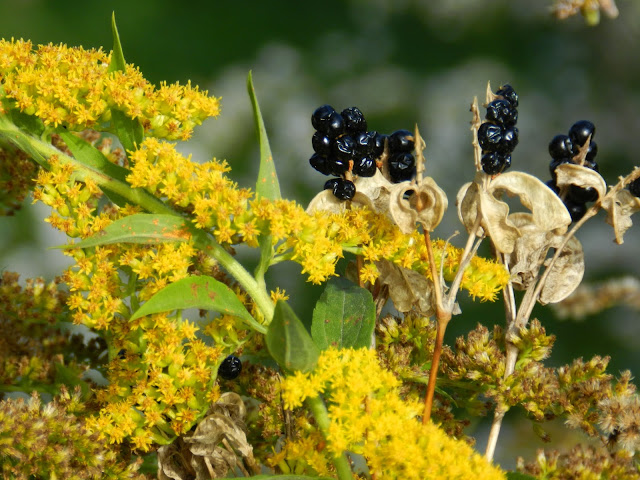 Blackberry lilies are showing off their seedheads, actually my favorite stage in this flower. 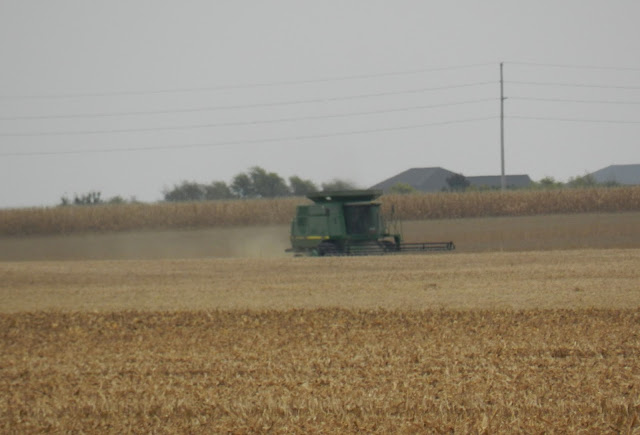 There are other obvious signs of fall in our area, too.  The last two weeks have been a busy time for farmers as they put in long days harvesting all the corn and soybeans. 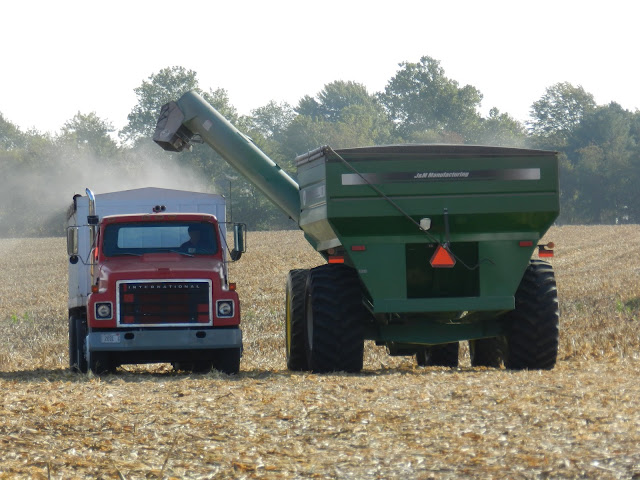 Surrounded all summer by tall corn, we can now see for miles once again.  Of course, that also means I probably shouldn't go out to the garden in my ratty blue robe anymore:) It's a time for gathering pumpkins at the popular local pumpkin patch.  We took two of the grandkids when they had a day off from school last week--Jack's sister was too "cool" to have her photo taken. 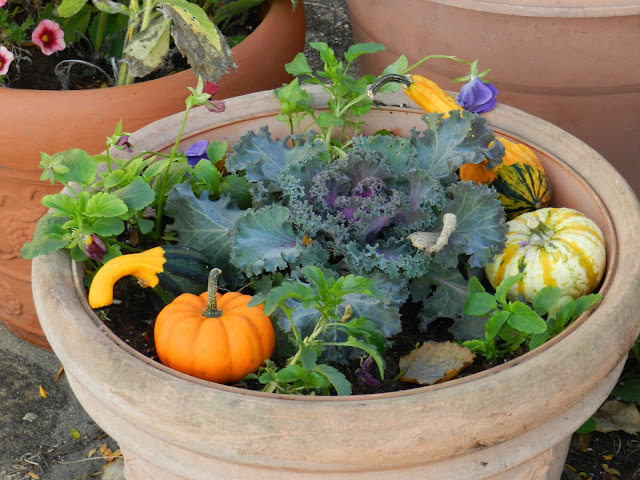 And it's time to spruce up a few containers with fall annuals. 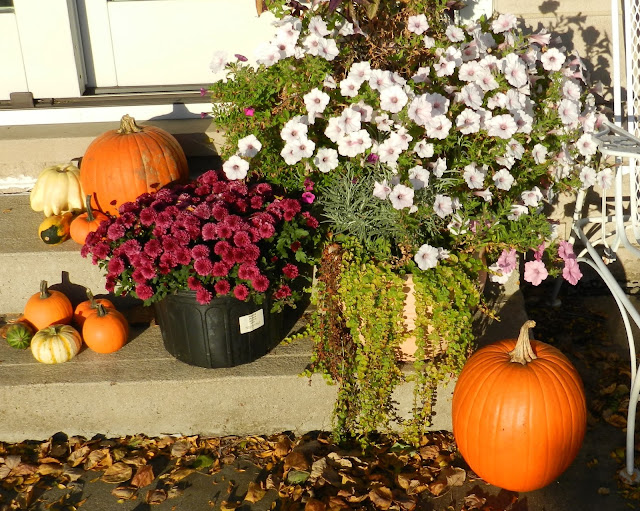 Although there are near-freezing temps in the forecast for this weekend, next week promises to be warmer once again, and there's even a chance of rain--hallelujah!  I'll be covering up a few plants like the pineapple sage for a couple of nights, trying to prolong the season.  And most of all, I'll be enjoying the garden for as long as I can.

Garden Bloggers' Bloom Day is hosted the 15th of each month by the indomitable Carol of May Dreams Gardens.
Posted by Rose at 8:01 PM