Good news here in my little corner of the heart of the Midwest--the snow is quickly melting, and today it is supposed to be in the 60's!   I won't say that spring has arrived--that might be jinxing it--but I have high hopes that soon there might be a few signs of new life in the garden.  Before I put away the winter jacket and scarves, however, I wanted to share a few pictures of the friends who have kept me company this winter. 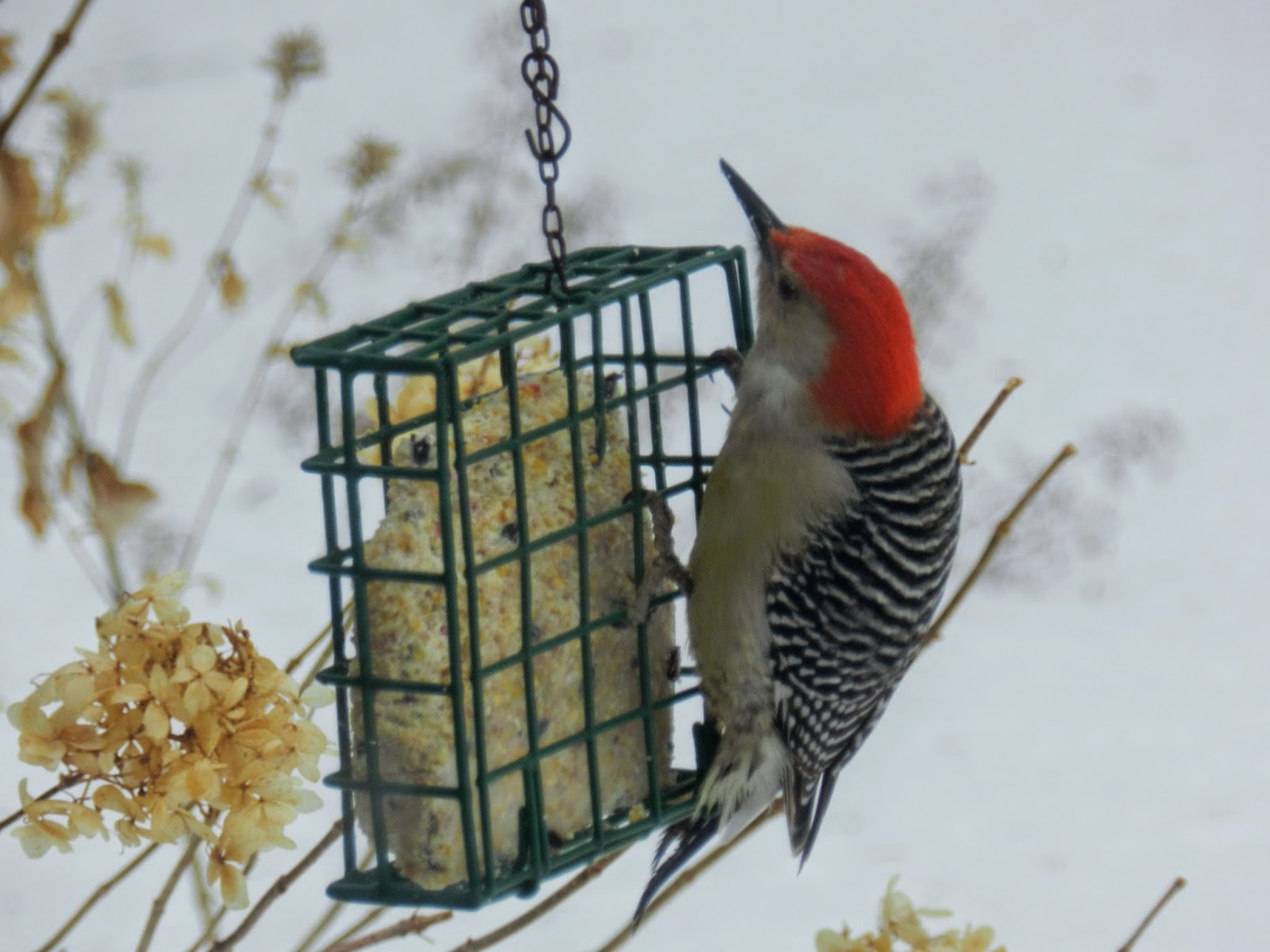 One of the things I've learned to enjoy during the winter is watching the birds.  The bird feeders have been placed within view of the living room window for better viewing and photo ops.  The suet feeder has been very popular the past few weeks, especially after a snowfall.  In past years, seeing a red-bellied woodpecker was an occasional treat.  This year I've been happy to see him (or her) on a regular basis. 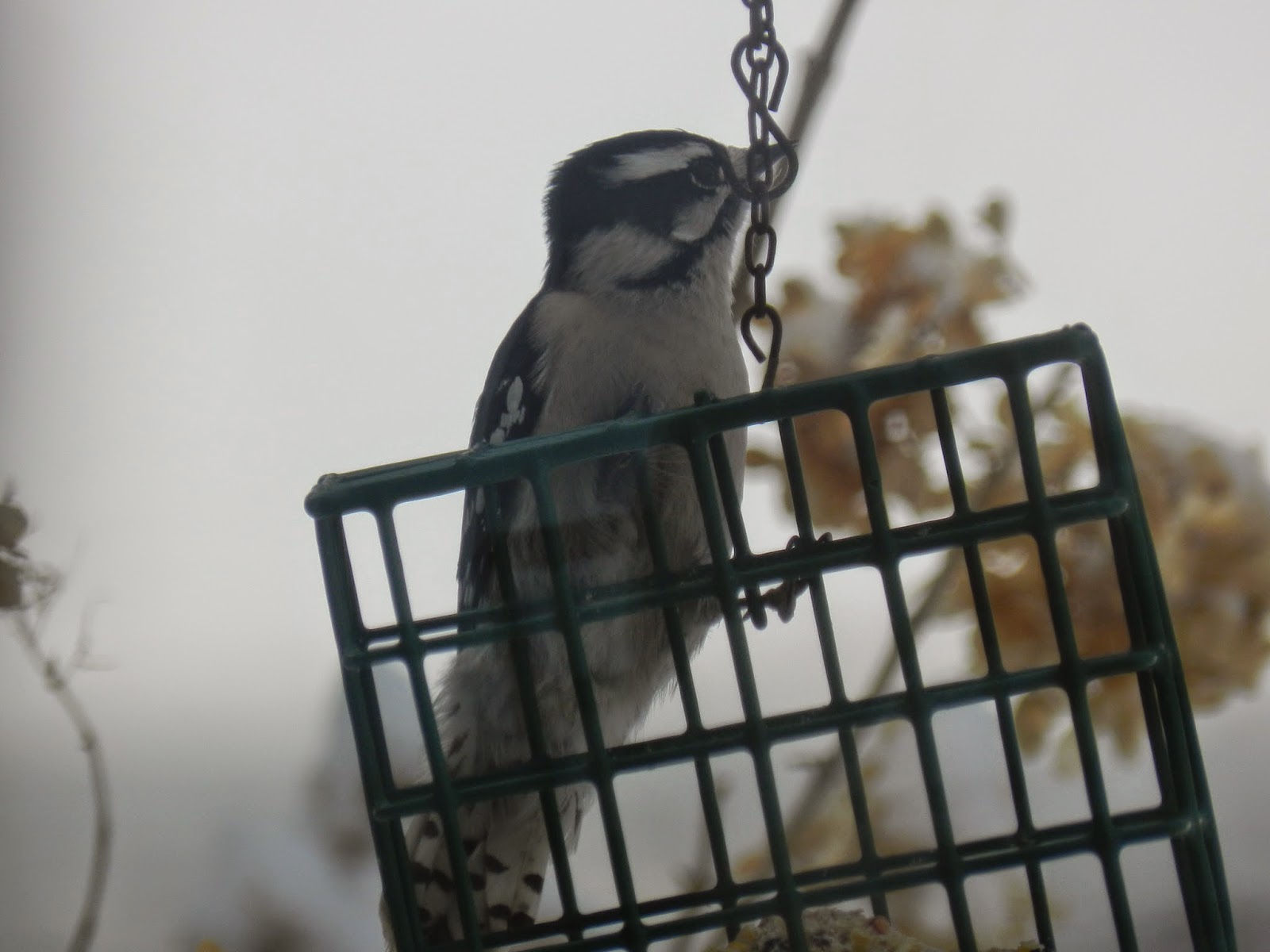 A pair of Downy Woodpeckers have been regular visitors, too.  This one must be the female, since I don't see the red spot on her head. 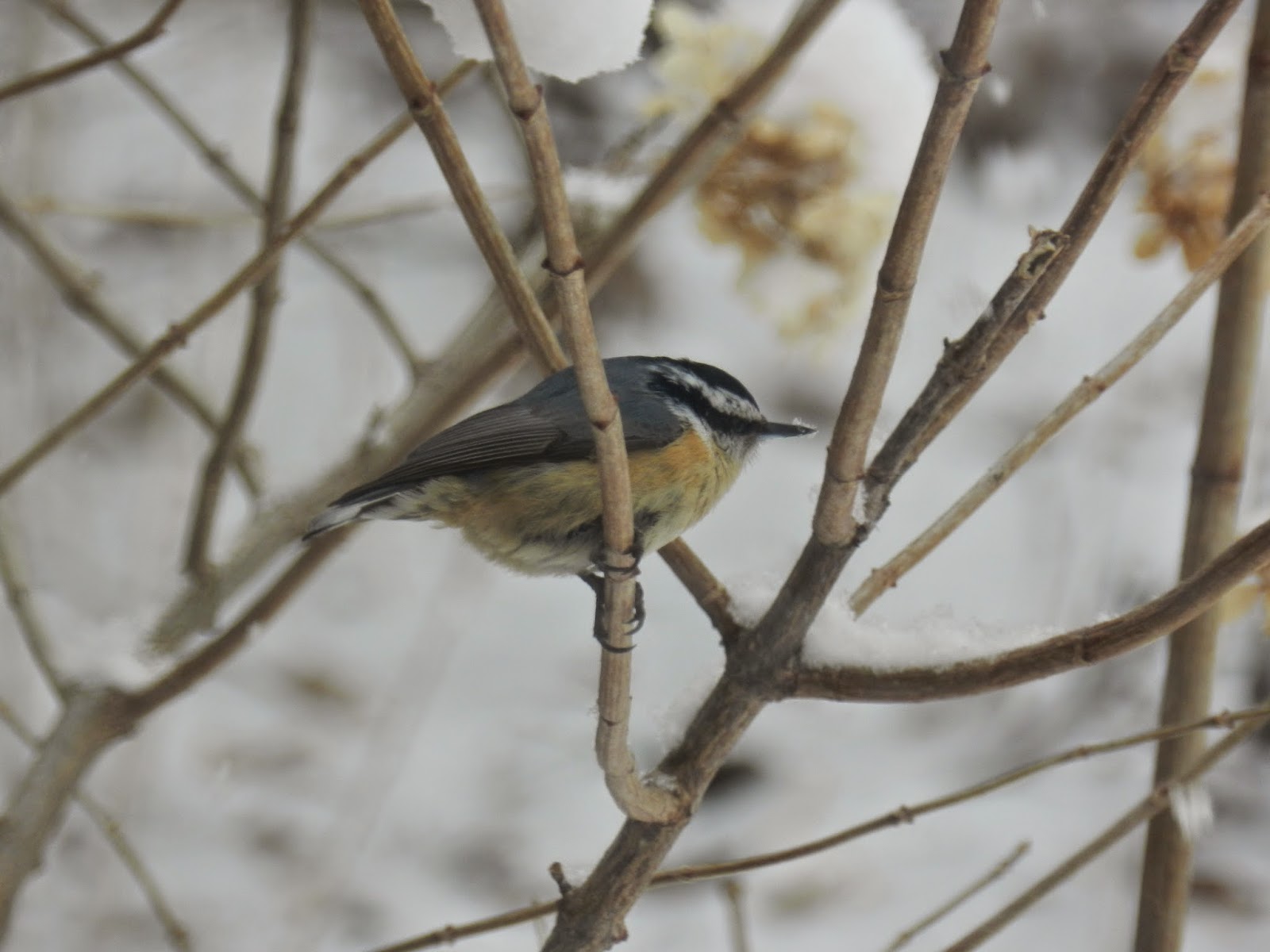 The white-breasted nuthatch, which I also showed on my last post, is fun to watch, as it usually feeds upside down. 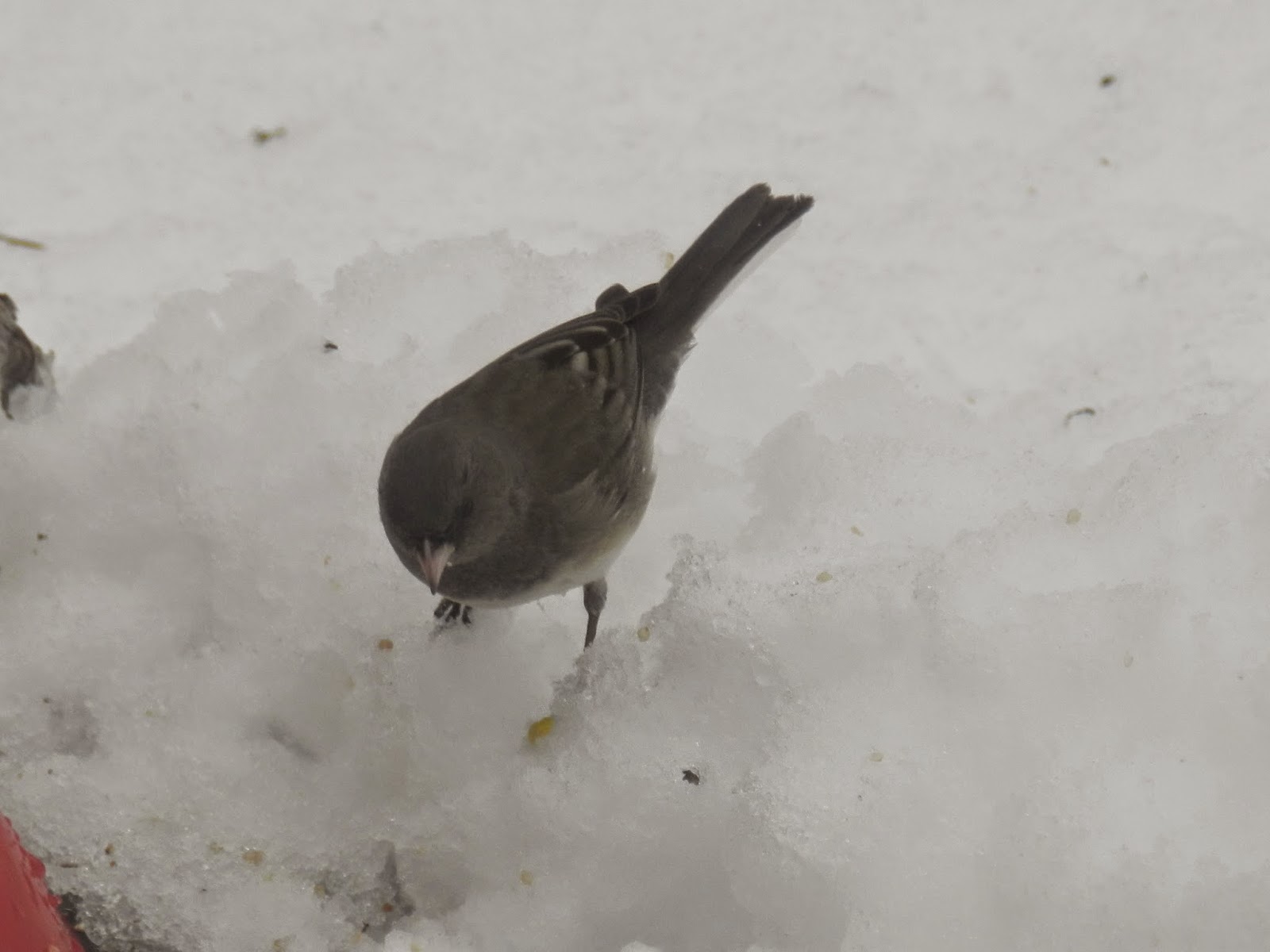 Other regular visitors at the feeders have been the finches (not sure what kind), sparrows, the occasional flock of starlings, and my personal favorite, the tufted titmouse.  Usually I also see dark-eyed juncos (pictured above) most of the winter, but it wasn't until last week's snowfall that they finally came as well. 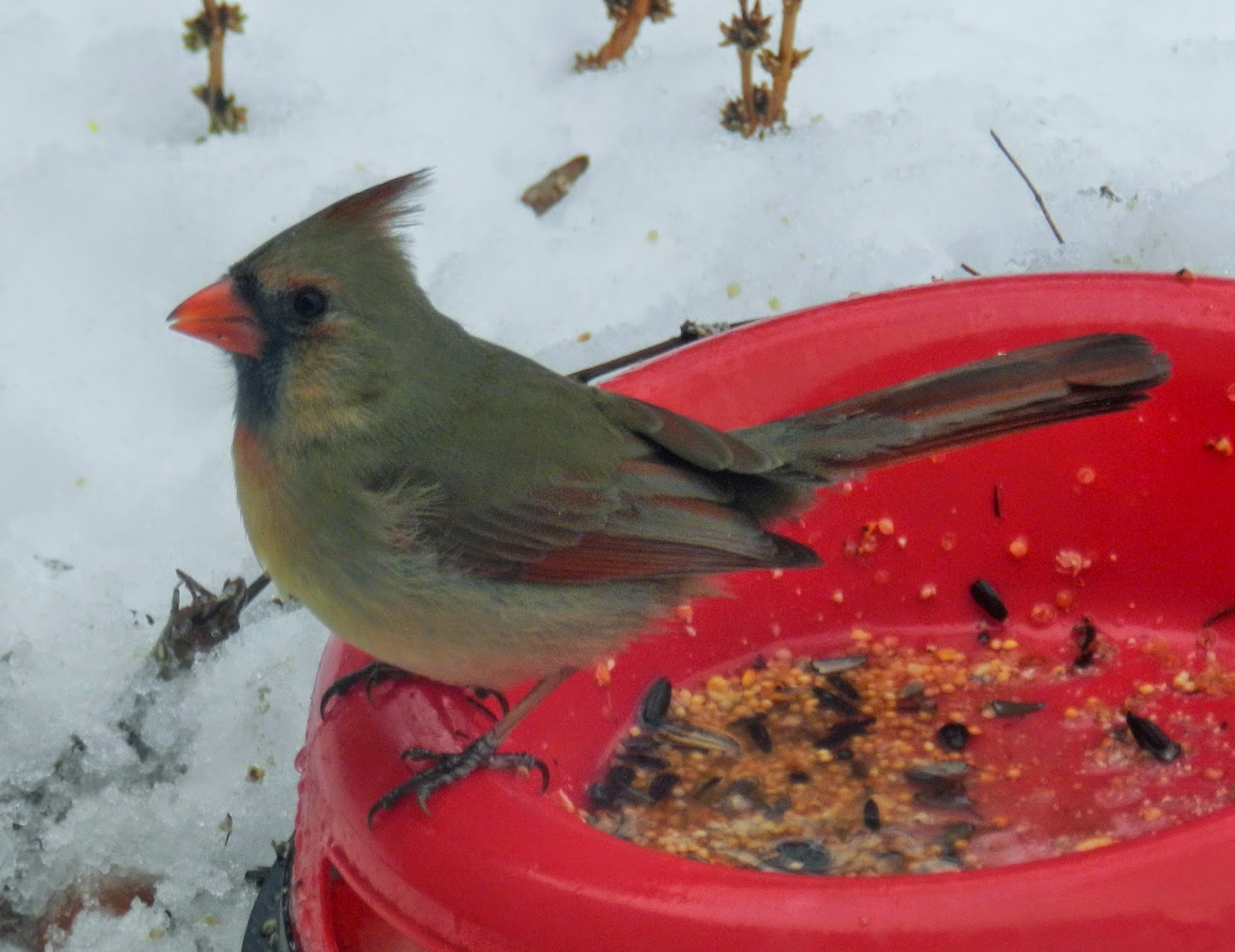 I also haven't seen many cardinals at the feeders this year, though I do see them perching in the trees.  The snow finally brought a female to sample some seeds last weekend. 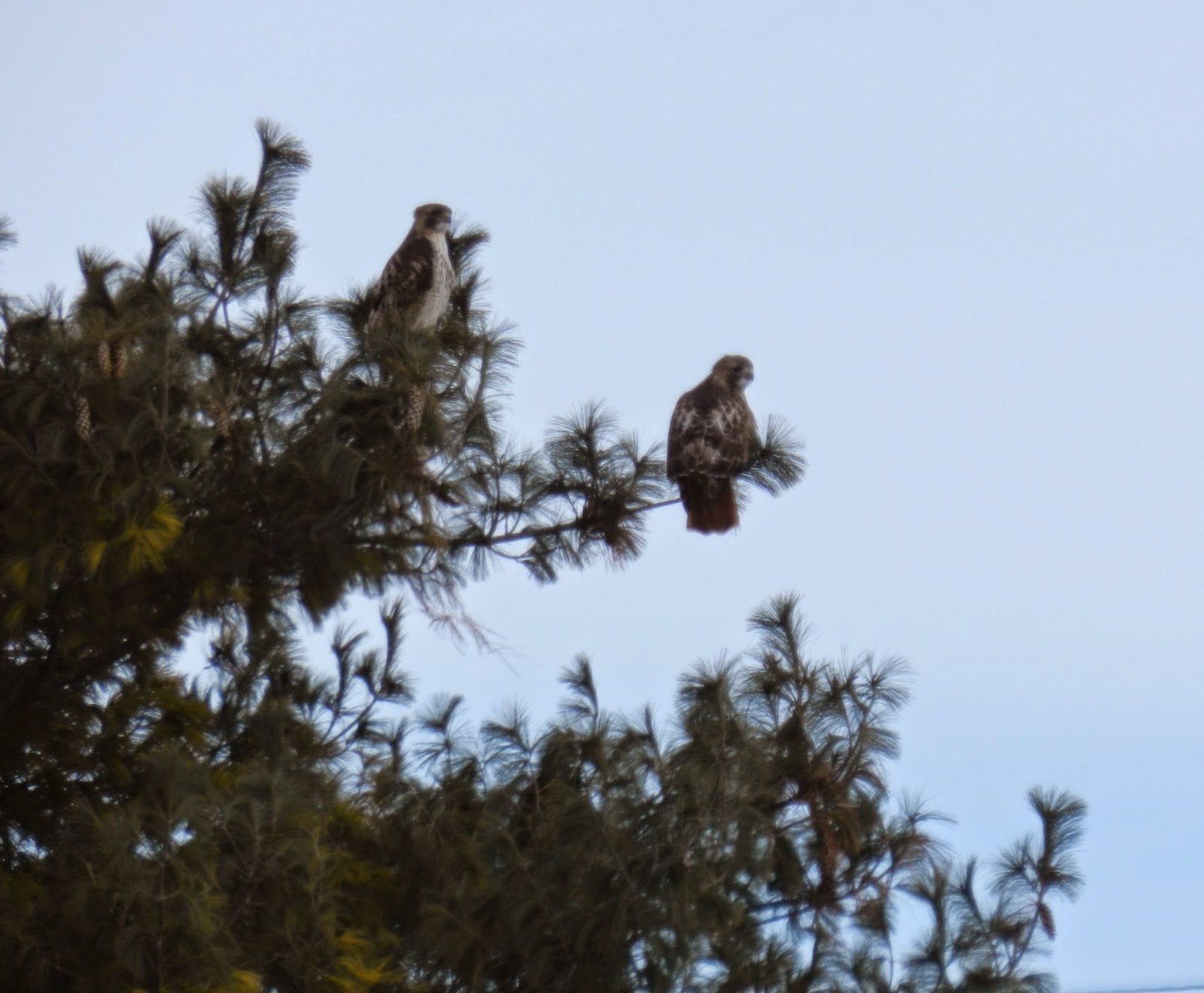 While the smaller birds are taking advantage of the feeders, these two scope the area for tastier treats.  Red-tailed hawks are a common sight around here, and one day I noticed one feeding on something in the middle of our yard.  As I drew closer, hoping to get a photo, it flew off, carrying a squirrel in its talons!  They are not easy to photograph, at least for me; by the time I moved closer to get a better photograph than the one above, they had already flown off in search of unsuspecting prey. 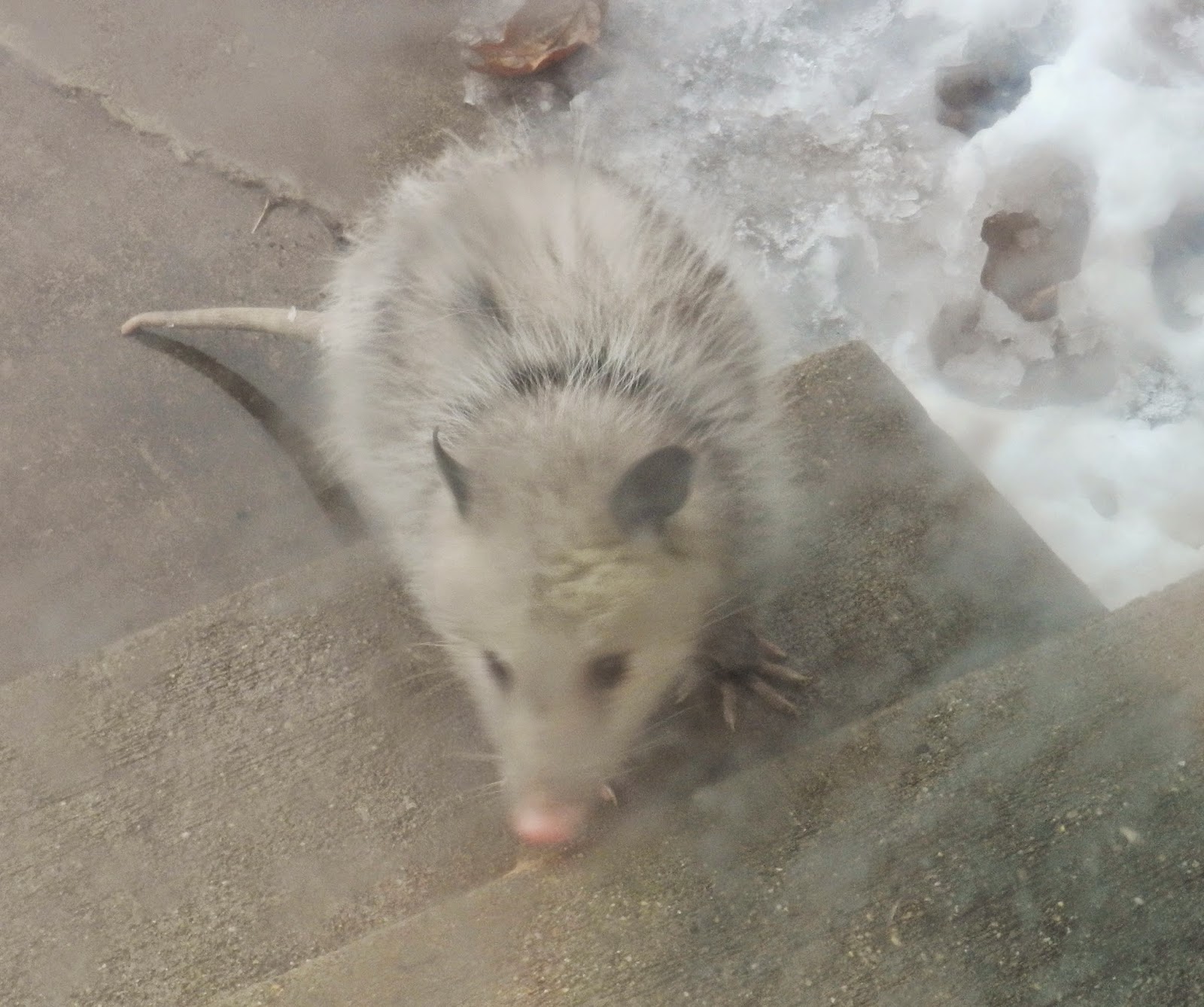 Not all the wildlife have feathers, however.  This opossum wandered onto our patio a few days ago, no doubt hungry and in search of food, too.  He even peeked inside, which drove the dogs crazy.  I'm not sure what would have happened if I had let them out and they had tangled with him, but I wasn't about to find out. 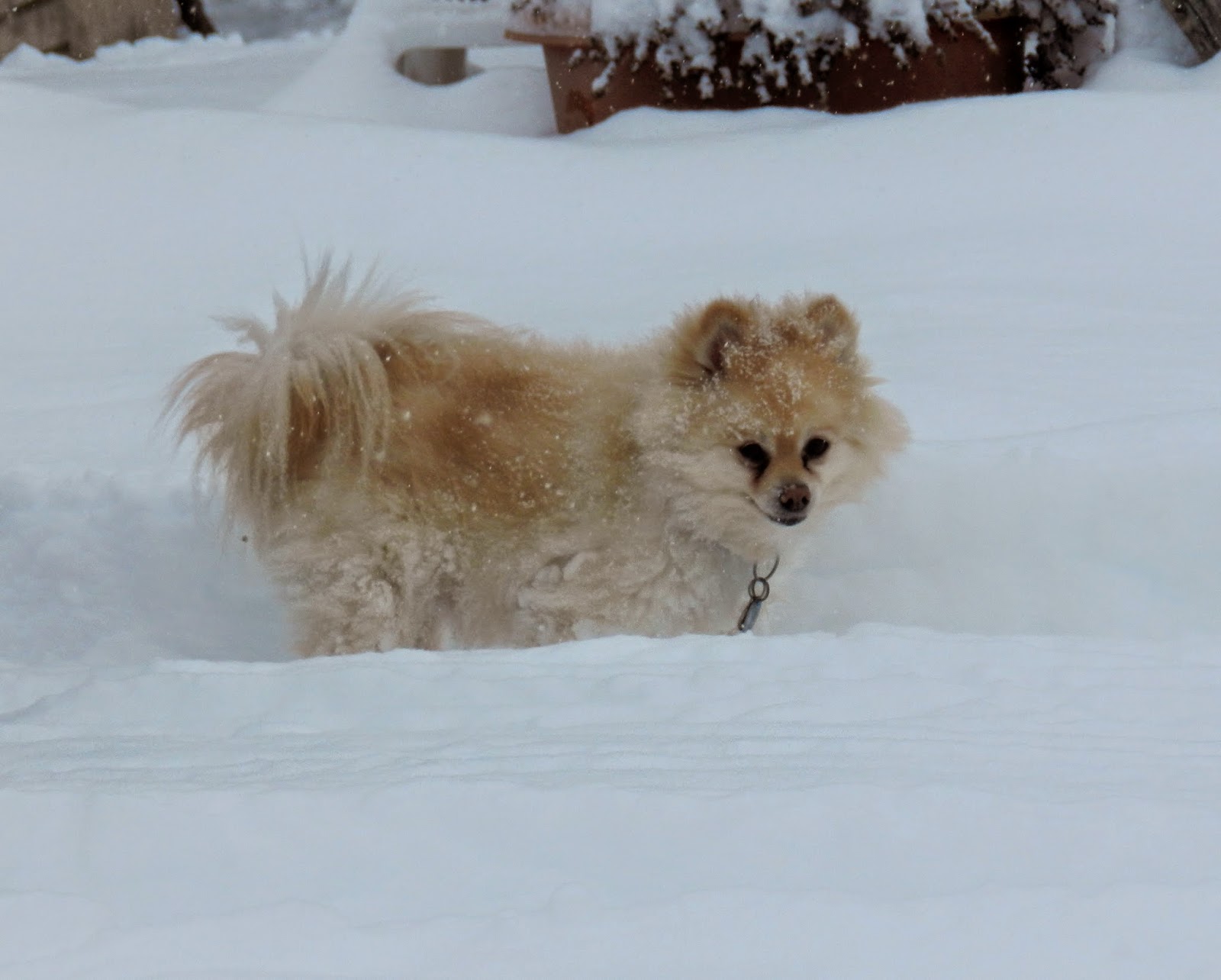 Speaking of the dogs, last week's 10 inches of snow made it difficult for the little ones.  Coconut followed Sophie or found tire tracks to make his way through the snow. 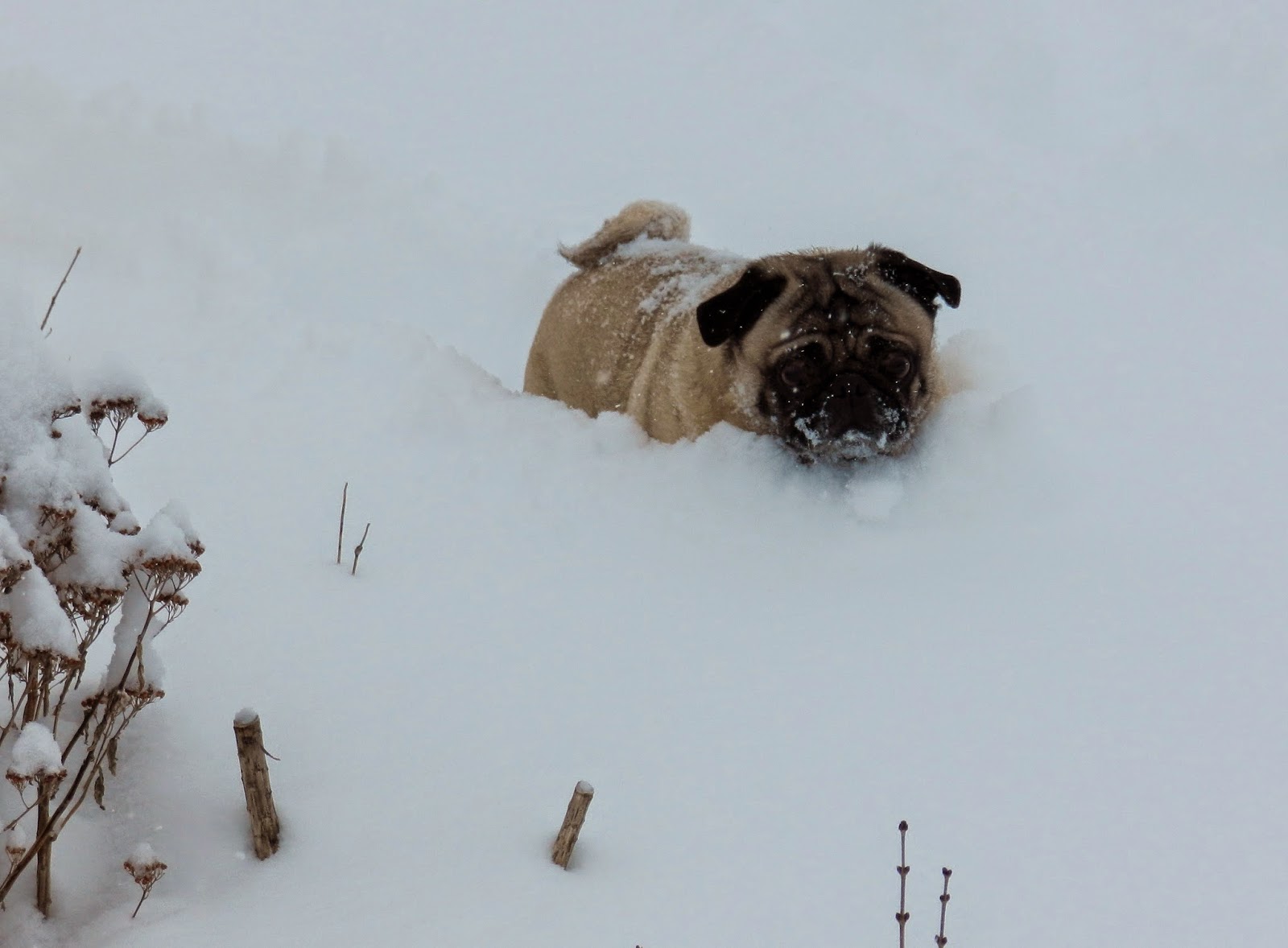 Frank, on the other hand, decided to blaze his own trails, but found it wasn't as easy as he first thought:) He's thrilled that the snow is finally melting away. 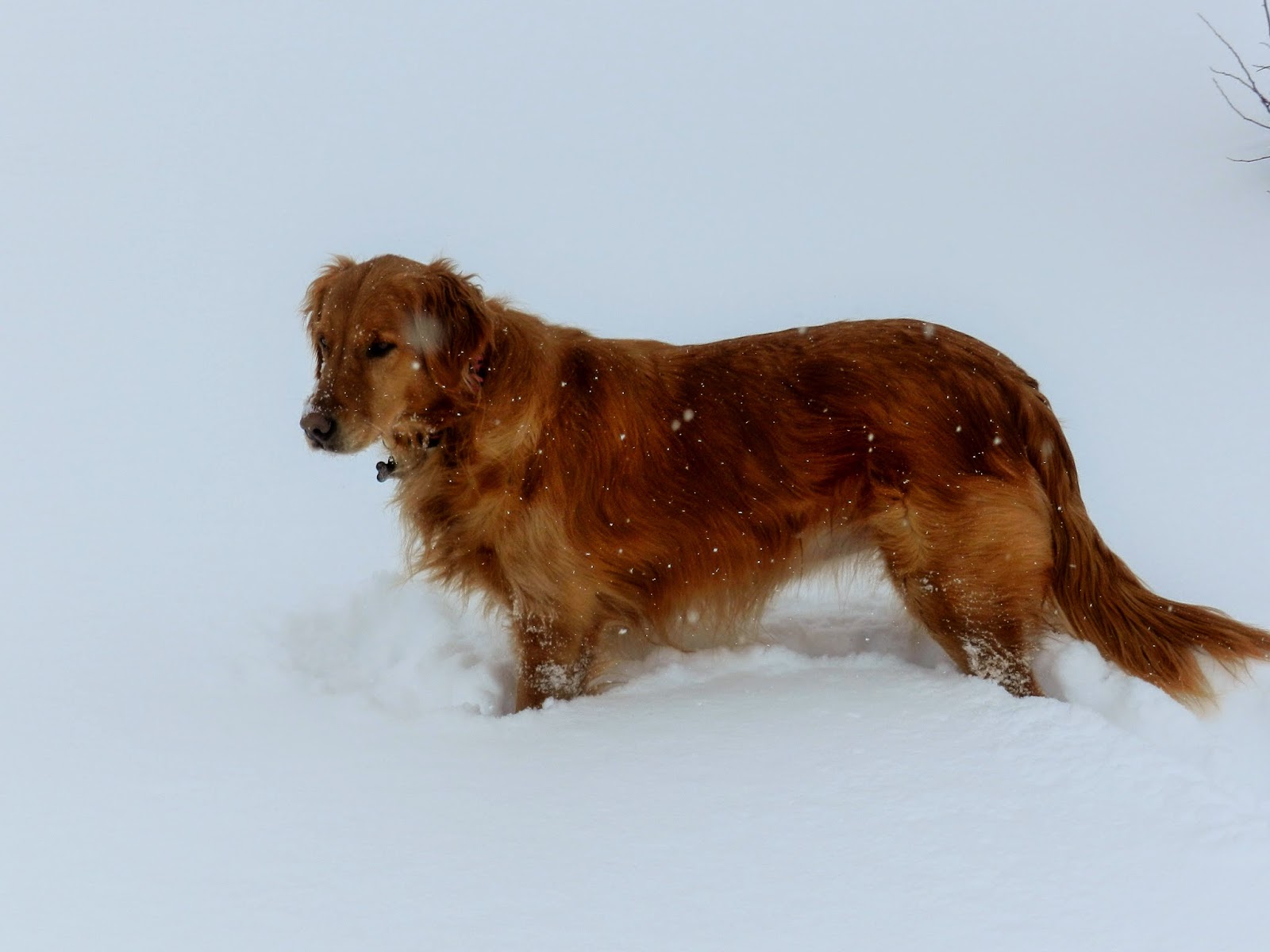 Sophie, however, is a true snow-lover--digging it out with her nose, making doggie snow angels, or even sampling a fresh bite of snow are some of her favorite winter activities.  But Sophie is pretty adaptable--I know that she is looking forward to digging in the dirt as much as I am.  Once the ground has dried out, she'll be the first one out the door--garden glove in mouth--ready to help me.  Oh, I hope it's soon, Sophie; I really do!
Posted by Rose at 9:14 AM