To Kill A Mockingbird has been a staple of high school curricula for many years and with good reason; it tops my own list of favorite books and one that I looked forward to sharing with my students every school year.  Published in 1960, the novel received a Pulitzer Prize in 1961, and a year later was made into the classic movie starring Gregory Peck, receiving three Oscars.  Since that time it has been translated into more than 40 languages and has sold over 30 million copies.  In surveys asking what one book "every civilized person should read," Mockingbird ranks second only to the Bible.

It's no wonder that such acclaim brought instant fame for its author Harper Lee.  While she granted the many requests for interviews at first, appeared at book signings, and played an active role in the production of the movie, the limelight soon grew too much for her, and she retreated to the privacy of her home.  For the past fifty years, little has been written about Lee that hasn't been told before. When asked for an interview, she usually replied with not just a simple no, but a "Hell, no." 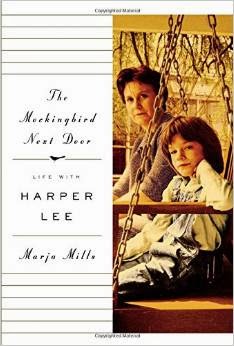 Despite Lee's reputation as a recluse, in 2001 Chicago Tribune reporter Marja Mills set out for Monroeville, Alabama, hoping for an interview with some of its residents, if not Lee herself.  To her surprise, not only did she get an interview, but she soon struck up a friendship with Lee and her sister Alice and began to think about writing not just an article, but a book. After her newspaper article was published, Mills went back to Alabama, renting a house next door to the sisters for the next year and a half.

The result of Mills' surprising friendship with Alice and Nelle Harper Lee is The Mockingbird Next Door: Life With Harper Lee.  The book gives the reader a peek into the Lee home--filled with stacks and stacks of books, as the sisters are avid readers--and a detailed description of their everyday life.  Contrary to her image as a recluse, Nelle (as she is called by her friends) leads an active social life.  She introduces Mills to their friends, and the two go for coffee at McDonald's, feed the ducks, and go fishing at the Lees' favorite fishing hole (location never revealed).  They visit the courthouse made famous by the book and now a museum and popular tourist attraction.
Mills interviews friends who provide insight into the characters and lives of the Lee sisters, and spends many hours recording interviews with Alice Lee, who in her 90's was still practicing law in her father's old law office.

The Mockingbird Next Door, however, is a memoir, and anyone expecting new revelations about Lee's inspiration for her novel or her reasons for dropping out of the limelight will be sorely disappointed.  Friends of the Lees share anecdotes but are very protective of the sisters' privacy.  In the many hours she spent interviewing Nelle Lee, Mills always asked for permission first to record their interviews and if she might include certain comments in her book, usually getting a negative reply.  About the only "juicy" revelation that Mills includes in the book is Nelle's recounting of her strained relationship with Truman Capote, the inspiration for the character Dill in To Kill A Mockingbird, and with whom she collaborated on In Cold Blood, Capote's most famous work.

Why did Harper Lee drop out of public view?  Why did she never write another novel?  These two questions that every fan of Mockingbird has always wanted to know are never really answered in Mills' book, at least not with any new revelation.  Nelle and Alice both confirm that she was overwhelmed by the publicity surrounding the book and then the movie and by the push to write another novel.  As Mills describes the town of Monroeville today with its tourist attractions capitalizing on Mockingbird's fame, including a diner named after Boo Radley, it is easier to understand why Harper Lee withdrew from the limelight.

As for why Lee never wrote another novel, we are only given her sister Alice's explanation: "When you have hit the pinnacle, how would you feel about writing more?  Would you feel like you're competing with yourself?"

Mills' story did not end with the publication of The Mockingbird Next Door.  After the book came out, Harper Lee denounced it, saying, "any book purporting to be with my cooperation is a falsehood." However, her sister Alice defended the book, saying her sister had recently suffered a stroke and likely didn't remember giving Mills permission.  Much has been written about the authenticity of the book, but I tend to believe Alice's statement and that Harper Lee originally did give approval of the book.  Further support is the lack of anything too revealing in the book as well as Mills' apparent respect for the Lees' privacy.


I have to admit I was rather disappointed at first with The Mockingbird Next Door, probably because my expectations were too high.  The book tends to ramble somewhat and is occasionally repetitive, and "the stories that need to be told," according to the sisters, never quite materialize.  Still, once I settled in and realized that there weren't going to be any sensational revelations, I enjoyed the book and spent a leisurely time getting to know Harper Lee and her wit and intelligence in a more informal way. I would recommend this book for anyone who has been as moved by To Kill A Mockingbird as I have. Harper Lee may have written only one novel, but what a novel it was! She will always be an icon to me.


Disclaimer:  I received no compensation of any kind for this review, and as always, I review only books I like.  I purchased my own copy of The Mockingbird Next Door: Life With Harper Lee to read for my book club, and I want to thank my friend for recommending it.
Posted by Rose at 8:00 AM