Lessons Learned in the Garden: Fall 2014


The winter solstice is a short time away, the official beginning of Winter and the day of the year when we can rejoice that the days will soon become longer again.  In the Midwest, though, Winter doesn't pay much attention to the calendar.  Although we haven't had the snowfall that some parts of the country had in November, we've had enough cold days to know that Autumn is long gone.  In my part of the country we have another season--"Winterum."  Winterum is that time of year when skies are gloomy and gray, and any warm afternoons are reserved for putting up outdoor Christmas decorations, not working in the garden. Winterum often begins in early November and sometimes lasts until January.  Frankly, if it weren't for the holiday rush that makes this time go by so quickly, I would say that Winterum is my least favorite season of the year.

Despite the fact that I can no longer work in the garden, dull Winterum is a good time to reflect upon the last season and to participate in Beth at Plant Postings' seasonal meme "Garden Lessons Learned."  Before my memories of  garden successes and failures fade away, here are a few of the lessons I learned this past season: 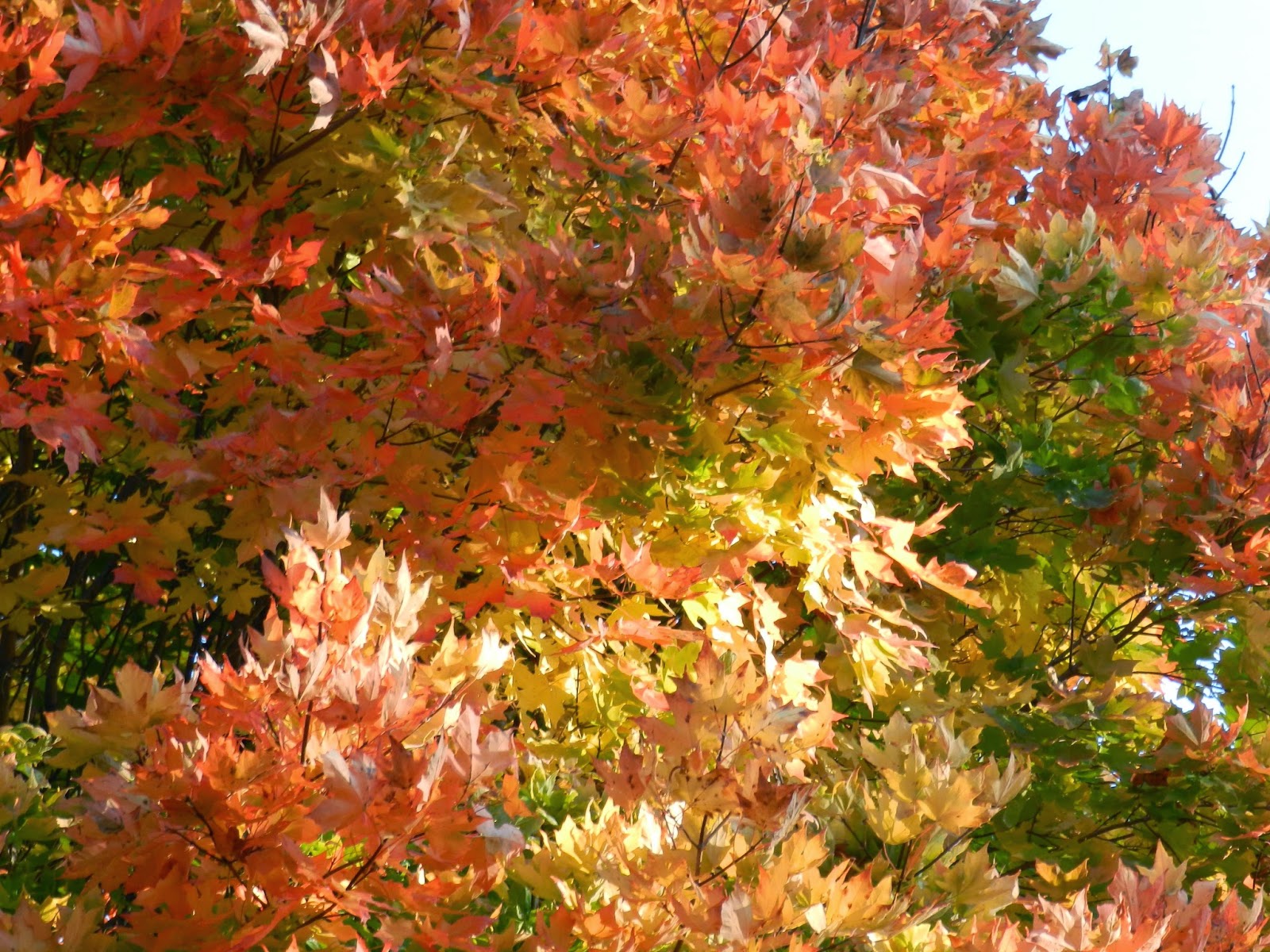 1. Fall is my second favorite season of the year!  Now that may not seem like much of a lesson one has to learn, but back in my days of working full-time, fall meant the beginning of a new school year with new lesson plans to create and adjusting to a busy schedule after a summer off.  One or more of my kids was usually involved in a fall sport as well, meaning evenings included games or meets or carpooling after practices.  That didn't leave much time for watching sunsets or leaf-peeping, unless noticing the changing color of leaves while whizzing down the highway counts. 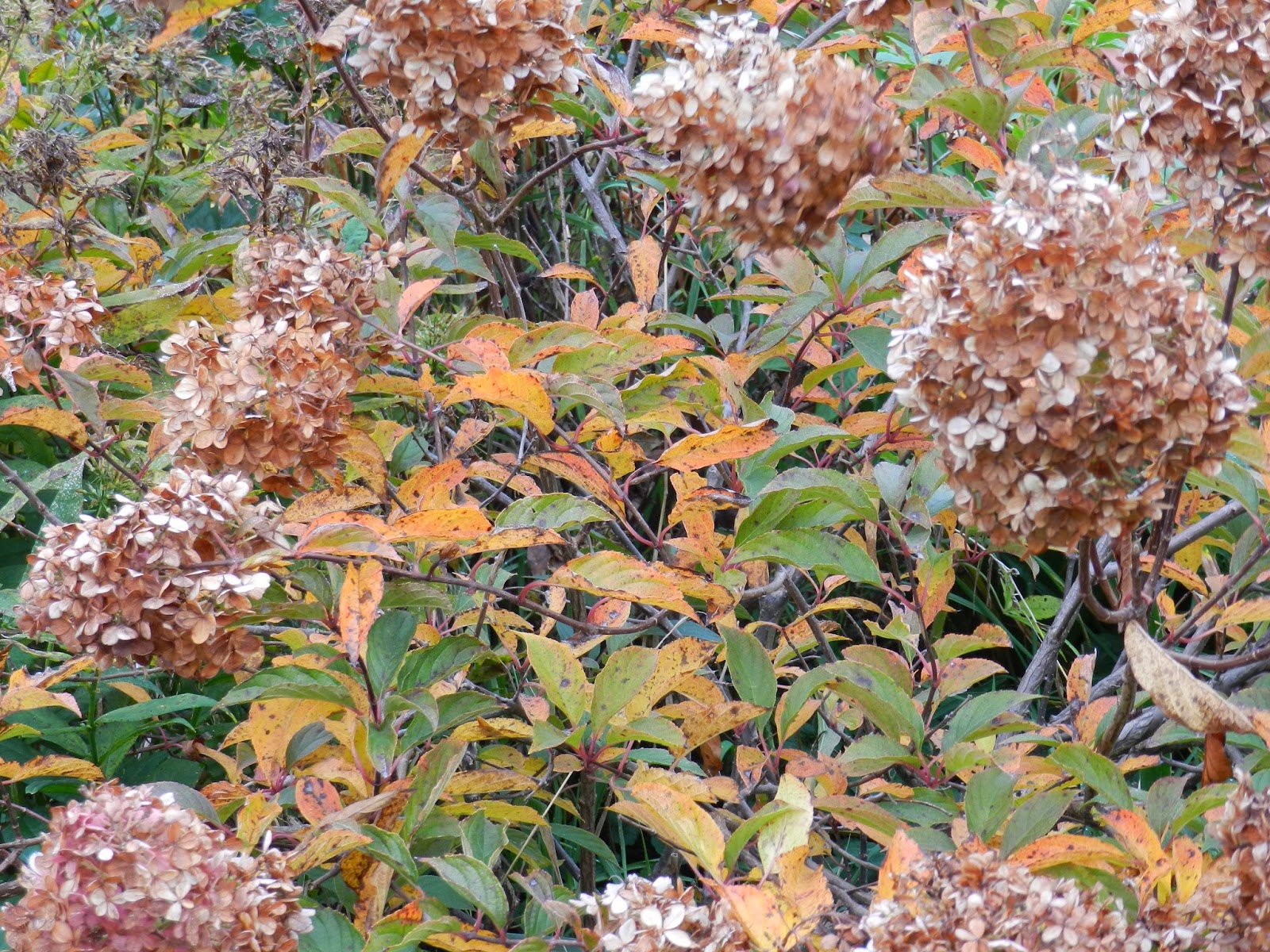 Now that my time is my own--usually--I've come to enjoy the cooler, crisp days of Autumn and enjoy the changes around me. I even appreciate the fading foliage and blooms of the garden. 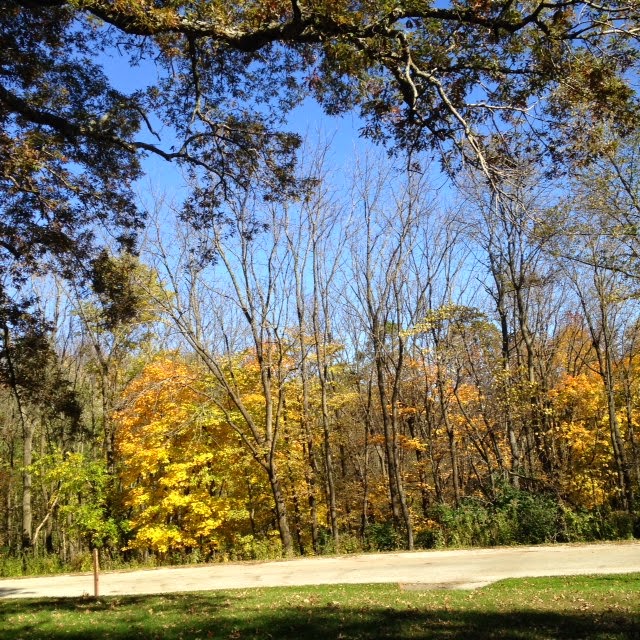 In fact, about the the only thing I don't like about Fall is that it is the shortest season of the year.  This year we had a little extra time to enjoy the season as the first frost and then a hard freeze came late; usually we are lucky if we have four or six weeks of true Autumn weather.  (For more fall color, you can click here.)


2.  It's okay to ask for a little help in the garden.  Over the years I've occasionally enlisted the help of my grandkids when I had some big jobs I couldn't seem to get done.  The oldest two grandchildren aren't particularly interested in gardening, but they're always willing to help Grandma, and though they would do it for free, Grandma is more than happy to pay them for their efforts.  In the past they have pulled weeds, spread mulch, and planted tulips for me.  But mostly, the "help" I get from the younger ones is more play than work, a way of getting them to enjoy a little bit of nature.

Youngest grandson above discovered the vegetable garden this summer, and every time he came over, the first thing he would ask to do was to go "pick 'matoes."  When I cleaned up the vegetable garden this fall, he was fascinated by the green beans still on the vines I had pulled--which surprised me, too!--and had to pick off every one before I could toss the plants on the compost pile. 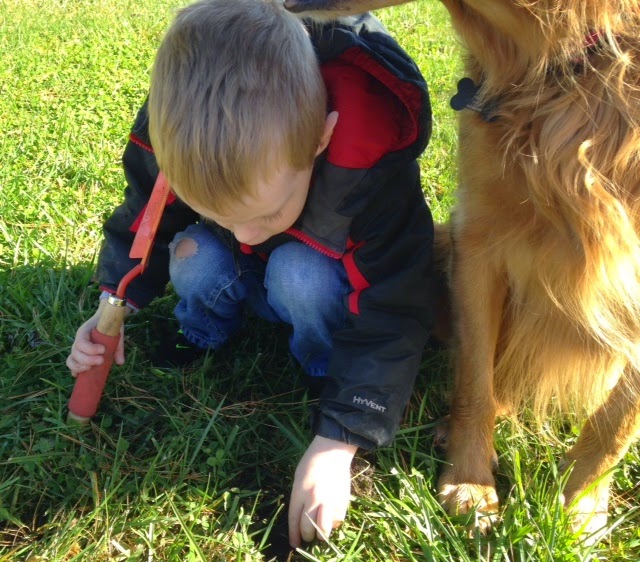 I even enlisted his help in planting a few crocuses one day--with Sophie's supervision, as you'll notice.  I'm pretty sure several of them were planted upside down, so we'll see if they come up, but at least he had fun.  And I hope when he sees them bloom next spring, he'll remember planting them. His older sister, Granddaughter #2,  is the one who has always been most interested in the garden.  But her help has been limited by her attention span or the heat or "too many bees" in the garden.  Until this year, that is. Not only is she growing up way too fast at 11-going-on-sixteen,  she also had a special incentive this year to help me--saving up for horseback riding lessons.  Grandma was more than willing to oblige with a flexible part-time job. 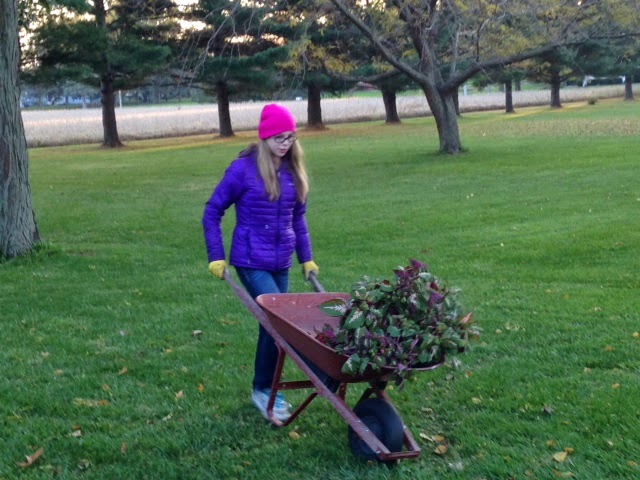 Besides helping to plant bulbs and some garden clean-up in the fall, she also helped to shovel and tote load after load of mulch to more remote areas of the garden during the summer.  I discovered that not only is she almost as tall as Grandma, but she is pretty darned strong for an 11-year-old.  I just hope my neighbor's horses continue to entice her:)

I've always thought that it was almost like cheating if you had much outside help in the garden. When people ask me about my small garden, I take a kind of smug satisfaction in saying that yes, I've done it all myself from digging up grass, weeds, and even rocks for every flowerbed I have, besides planting every single plant.  Oh, don't get me wrong--if I suddenly won the lottery, I'd hire a landscape designer and a crew with a backhoe to dig up half the yard in a heartbeat!  But I would want to choose and plant everything myself as well as do the day-to-day maintenance.

I remember reading Sydney Eddison's Gardening for a Lifetime  several years ago in which she gives advice for gardeners as they age.  One of her tips is to enlist more help in the garden.  I'm afraid I've reached that age where even my small garden is becoming harder and harder to maintain without aching knees or the latest malady--painful tendonitis in my hand from too much weed-pulling.  Next year I plan to enlist help from my granddaughter on a more regular basis, or if she is too busy, I might recruit another budding young gardener from the community. 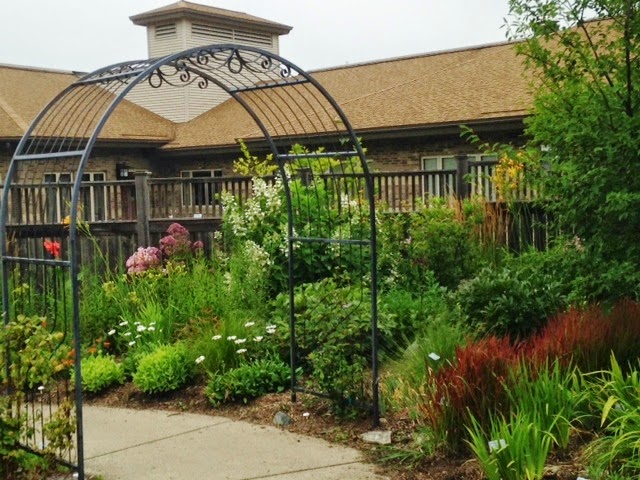 3.  I've learned so many lessons about gardening this year as a volunteer.  As a Master Gardener intern four years ago, I spent some time volunteering at the County Nursing Home Garden.  I was already volunteering at the Idea Garden which I thoroughly enjoyed, so I intended to just fulfill my community service hours requirement at the Nursing Home and then move on.  But I found the Nursing Home group was such an enjoyable group to work with, and the co-chairs had such a wealth of knowledge on gardening that I found myself picking their brains every chance I could.  So I continued volunteering in this garden for the next three seasons.

Last summer Phyllis, the co-chair who had been one of the original creators of this garden before it even became an MG community project, developed health problems and decided to step down.  The other co-chair, Carol, decided she would retire as well.  Two of my friends asked another friend and me if we would serve as co-chairs with them this year.  I hesitantly agreed--even the four of us couldn't fill the shoes of Phyllis and Carol!


Being a co-chair of this garden this year has been a tremendous learning experience.  Instead of one of the minions who asked what needed to be done and then attended to that task only, whether deadheading or weeding, I was suddenly supposed to know what everyone else should do!  I'll be honest--in past years, I wasn't a regular volunteer.  I showed up when it was convenient for me--or if it wasn't going to be 90 degrees that morning:)  But this year, I was there every Monday workday, other than the week of the Portland Fling, whether it was spitting rain or steaming hot.

Maintaining a garden that someone else has designed and planted is certainly different than working in your own garden.  I view the garden as others see it, not the way I would like it to be--though I certainly wish my own garden was as well-maintained and weed-free as this garden is!  Thanks to a great group of faithful volunteers, keeping the garden looking beautiful is fairly easy.

I began to feel a sense of ownership and pride in this garden.  The four of us felt a responsibility, not only to the residents and staff who enjoy the therapeutic benefits of the garden, but to Phyllis and Carol who had lovingly created and maintained this garden for so long.  I noticed things in the garden I hadn't seen before, especially the careful planning that had gone into it, making sure the garden looked appealing every season of the year: 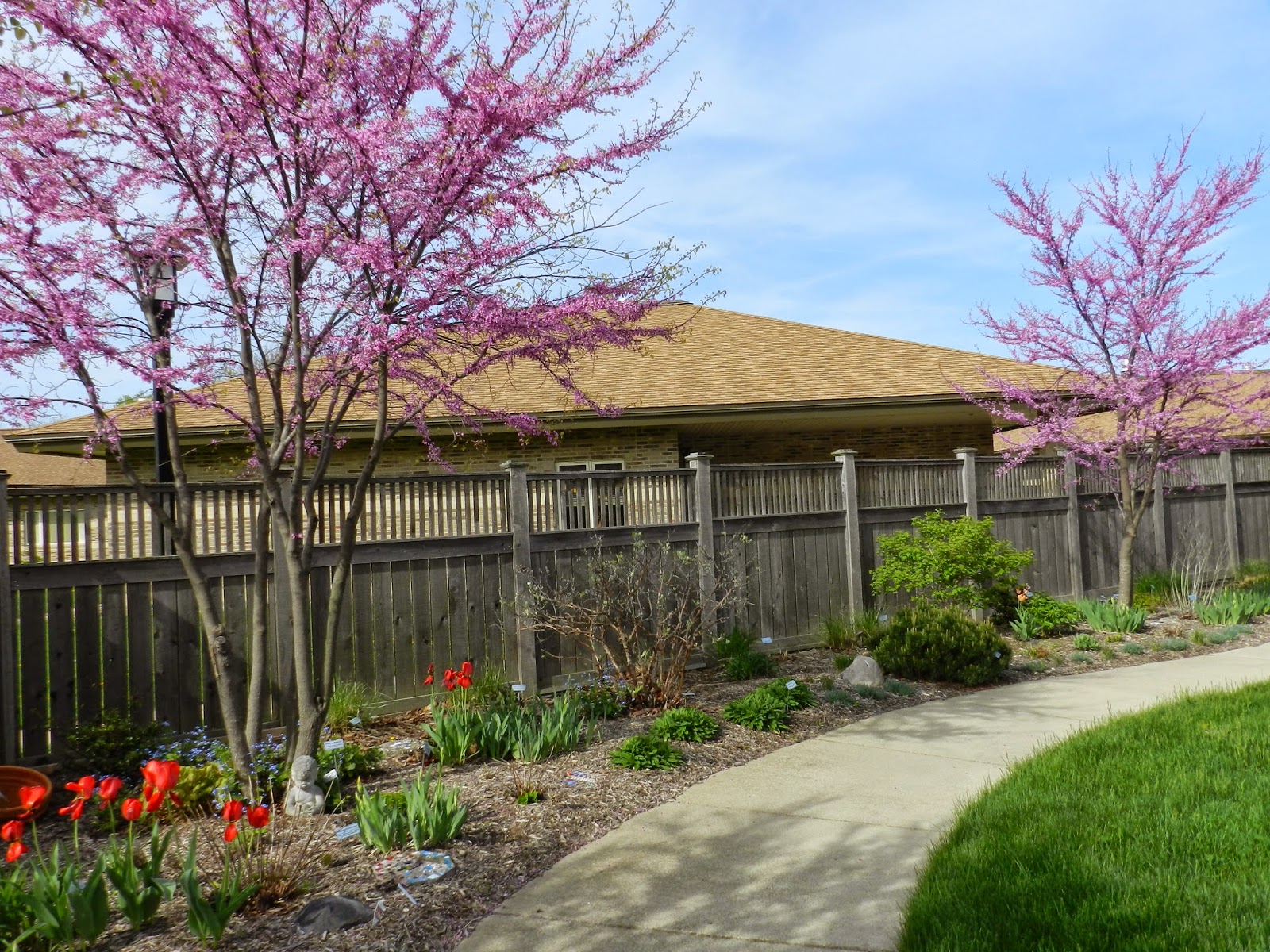 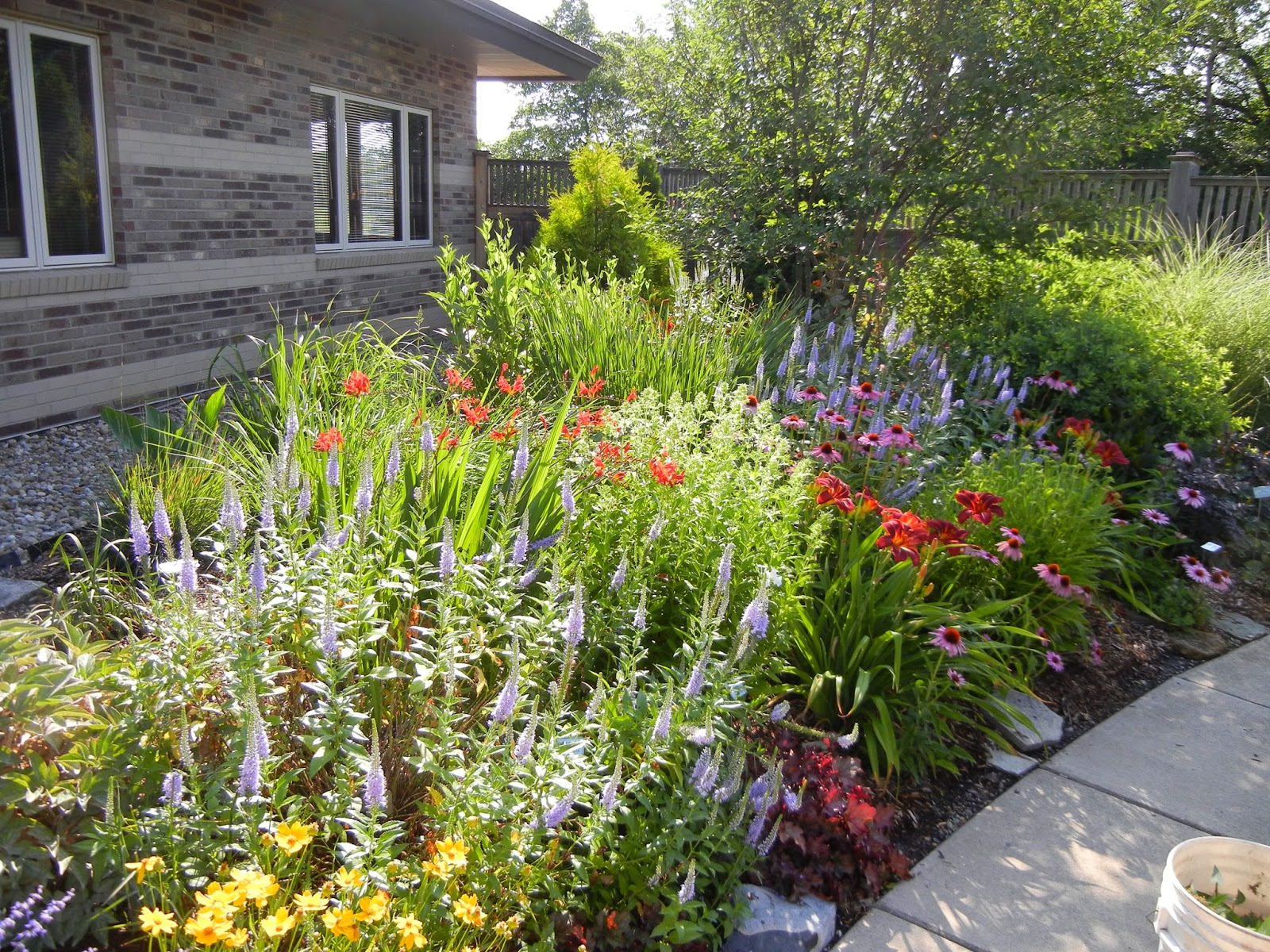 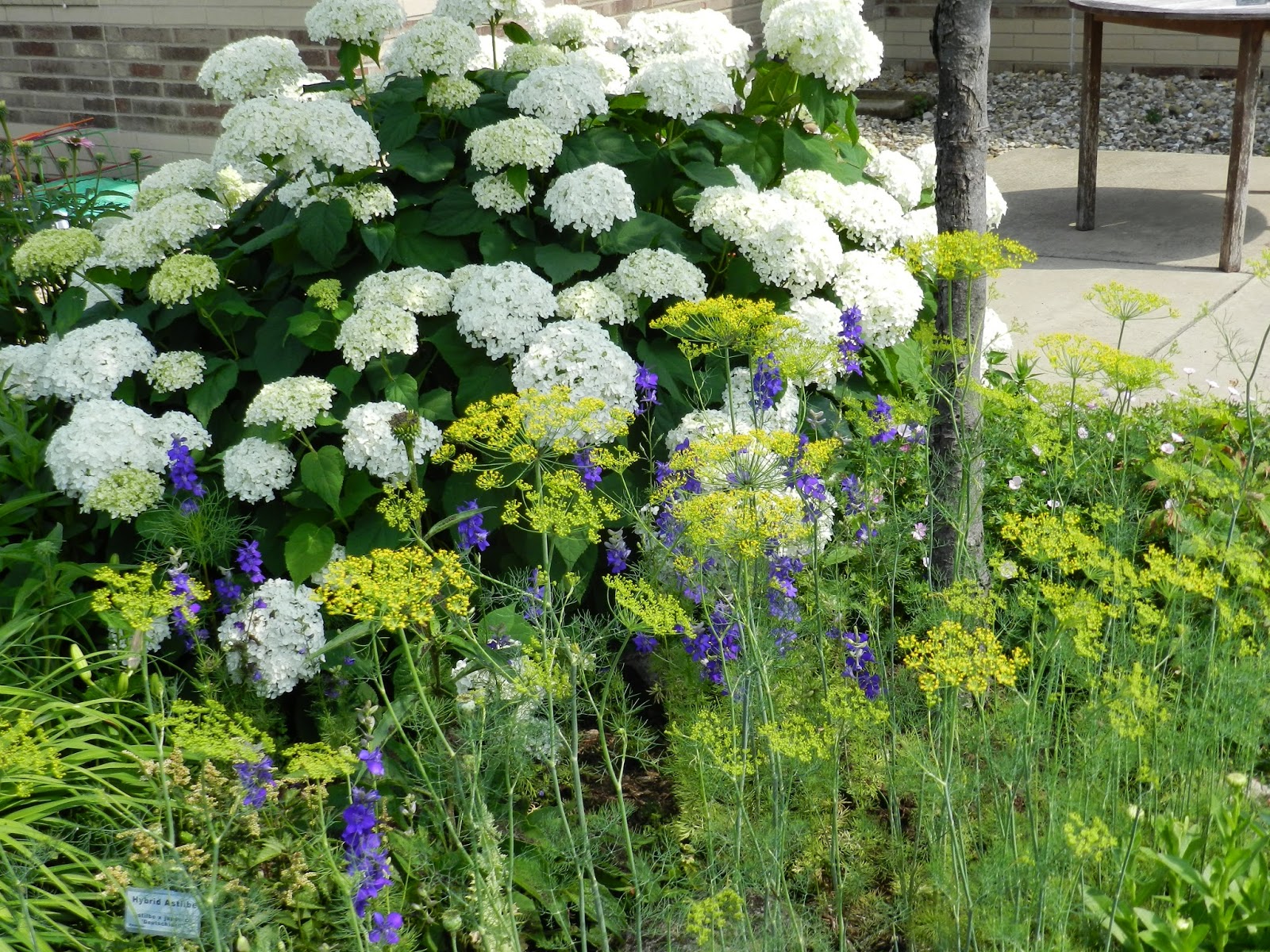 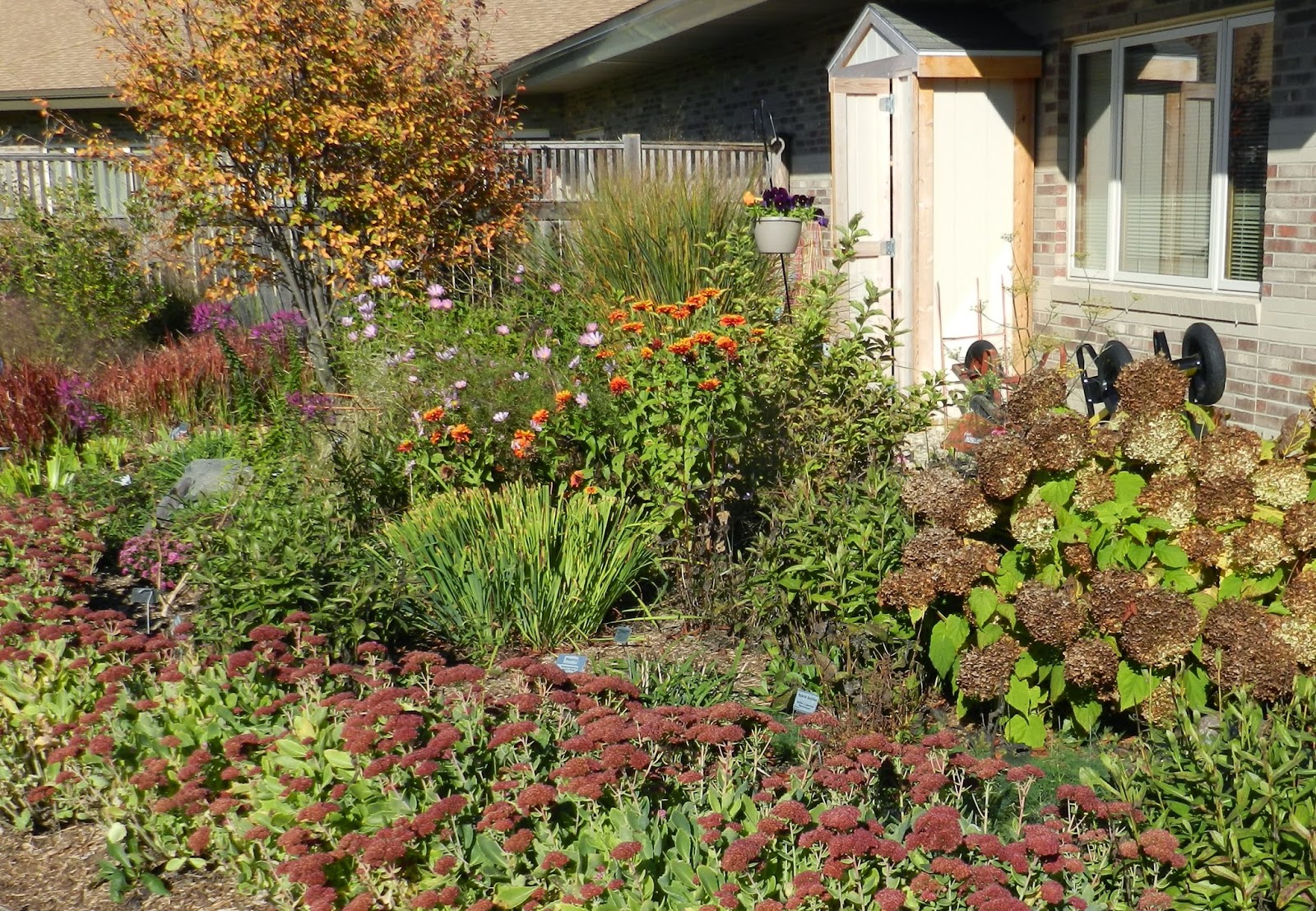 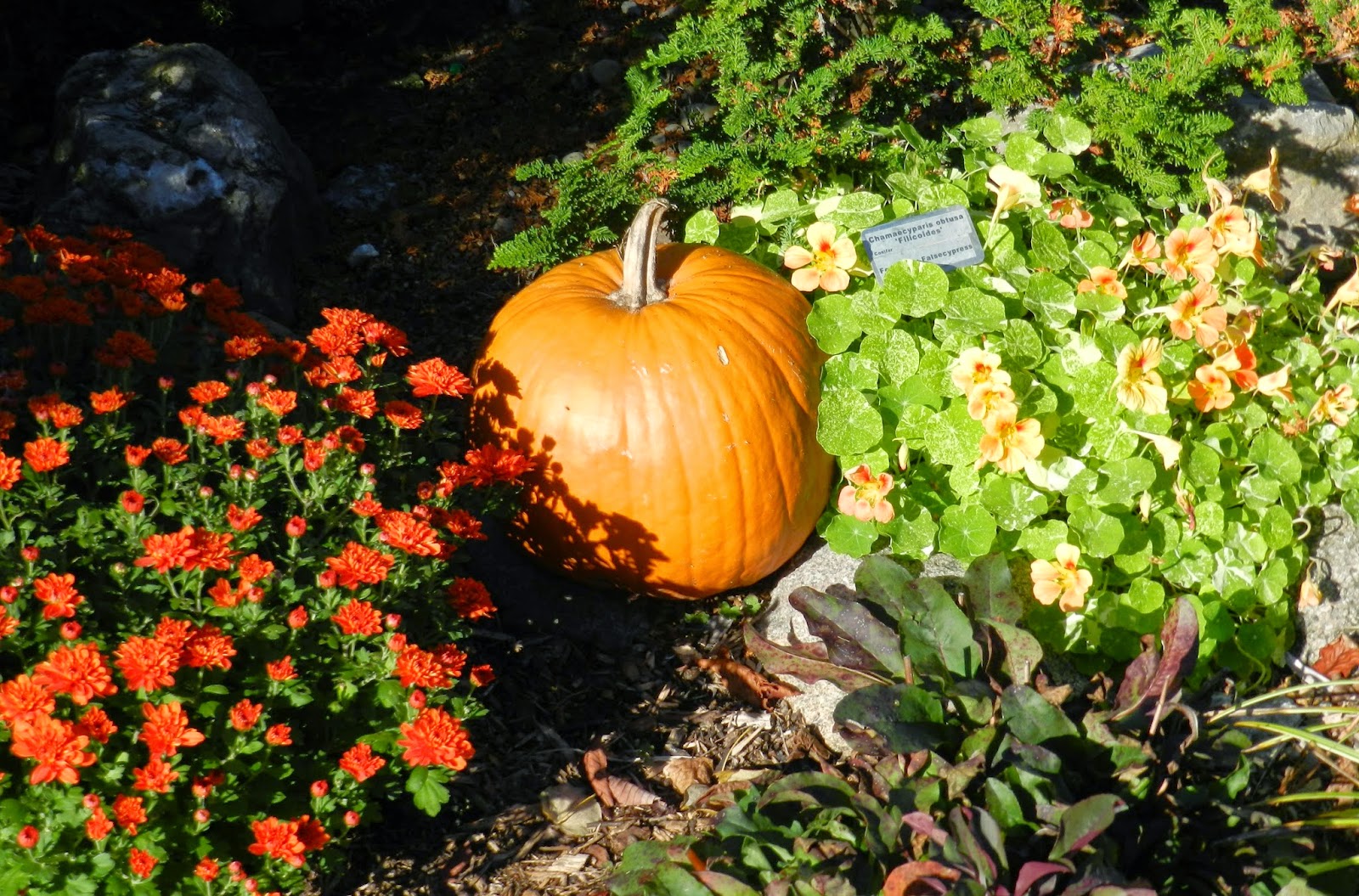 I can't begin to list all the lessons I learned from being one of those in charge of this garden this year--this post is already long enough! But they include everything from record-keeping and budgeting to recruiting volunteers.  When we weren't sure how to prune some of the shrubs, we divvied up our questions, and each of the four of us researched a specific shrub.  My research helped me in my own garden, too, in deciding how to prune my smokebush.  We learned how to compromise and make the best use of each other's strengths.  Most of all, we learned to put individual preferences aside and to remember always the mission of the garden.

Once again, as I look back at the past season, I am surprised by all that I have learned.  Thanks to Beth for hosting this meme--you can view lessons learned by others at Plant Postings.  I'm sure next season will bring  more new experiences to learn from--after all, gardeners grow, too.
Posted by Rose at 5:23 PM