Why am I always late for Wildflower Wednesday?  I don't mean a couple days late: our hostess Gail of Clay and Limestone celebrates wildflowers all month long and isn't fussy about deadlines for her monthly meme.  No, I'm talking about being a whole month late. 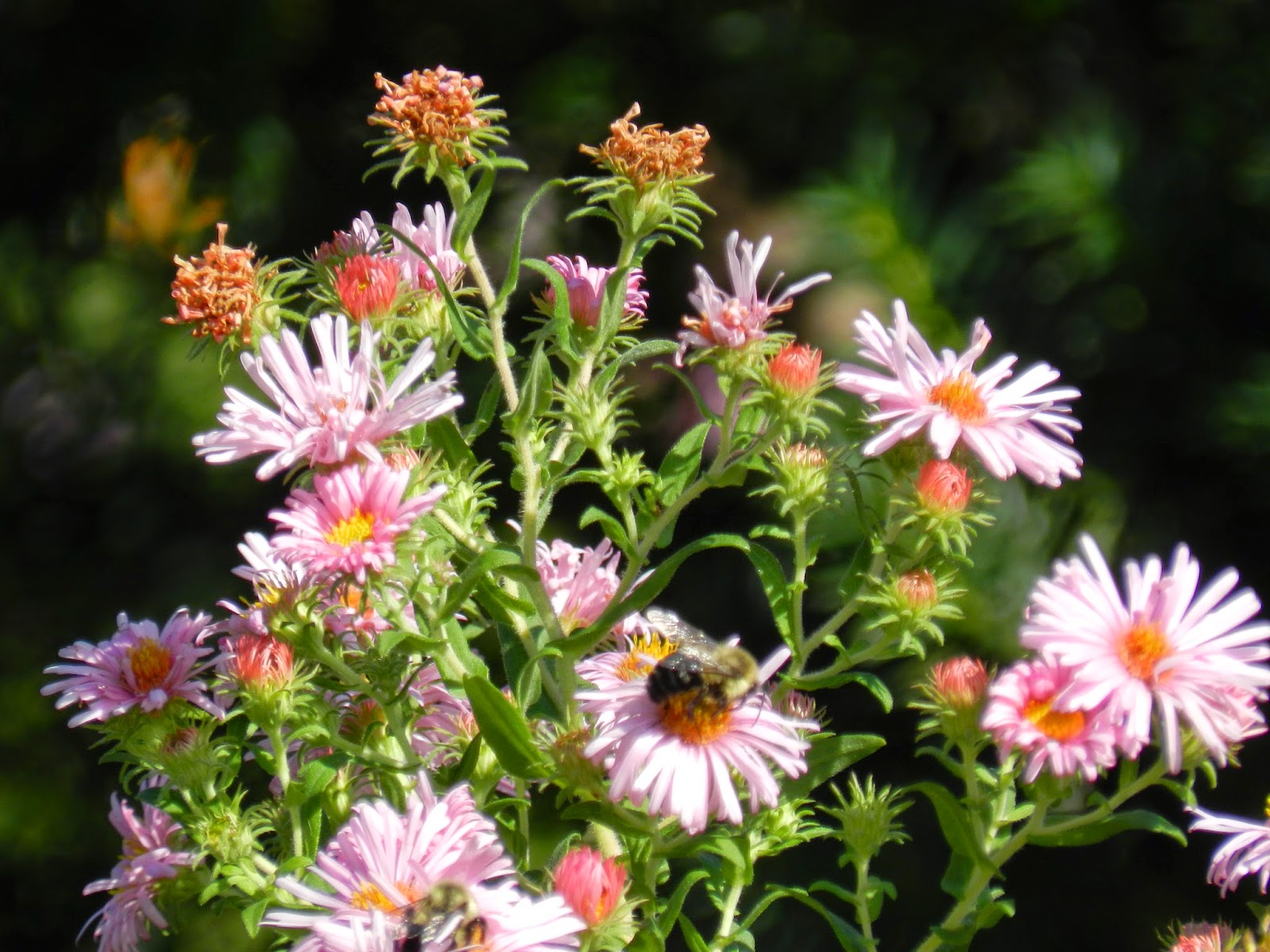 Back in late September I had planned to show off the New England asters that have taken over were blooming in the small butterfly/native garden. 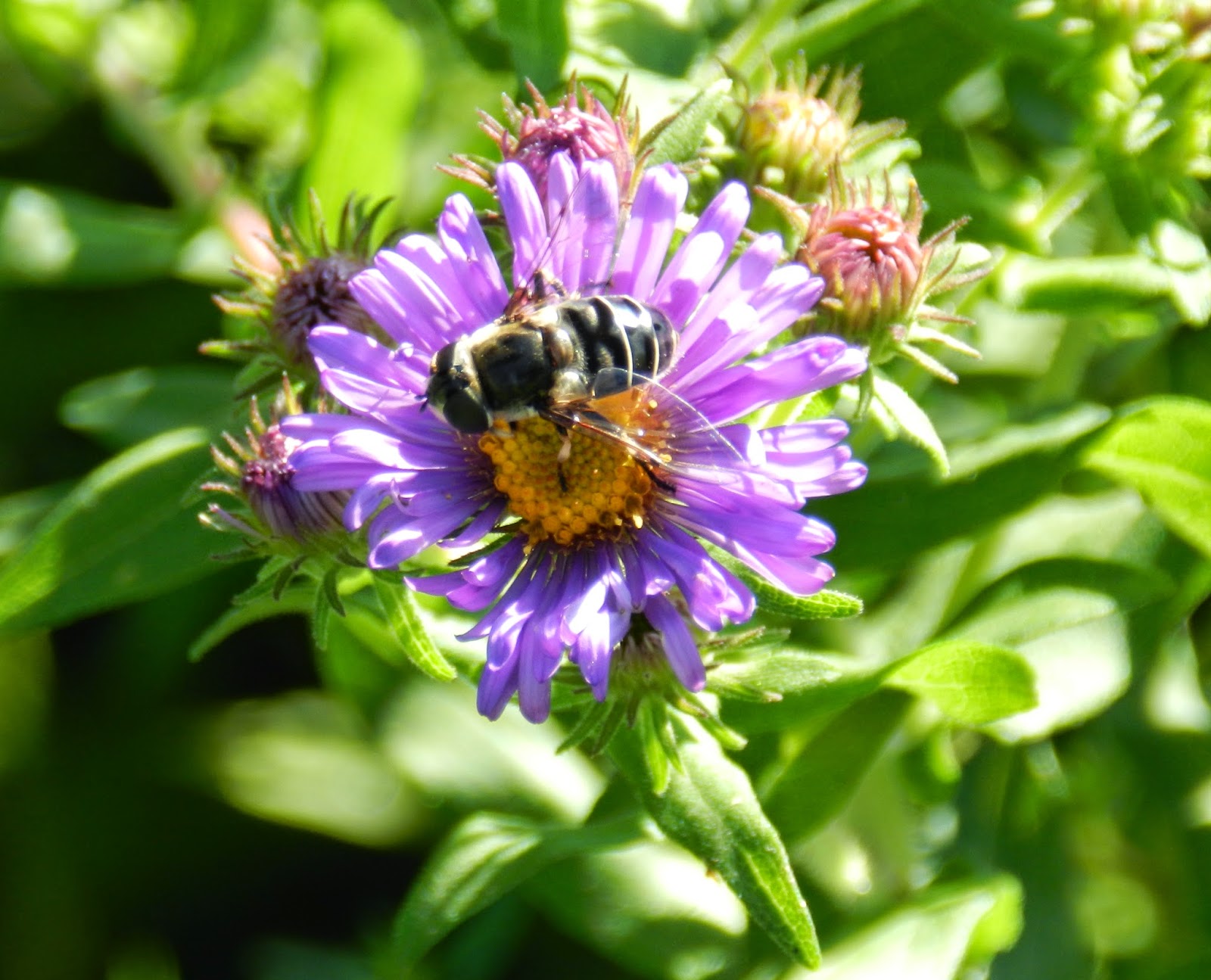 In September these purple and various pink blooms were covered with all kinds of bees filling up with nectar for the long winter ahead. 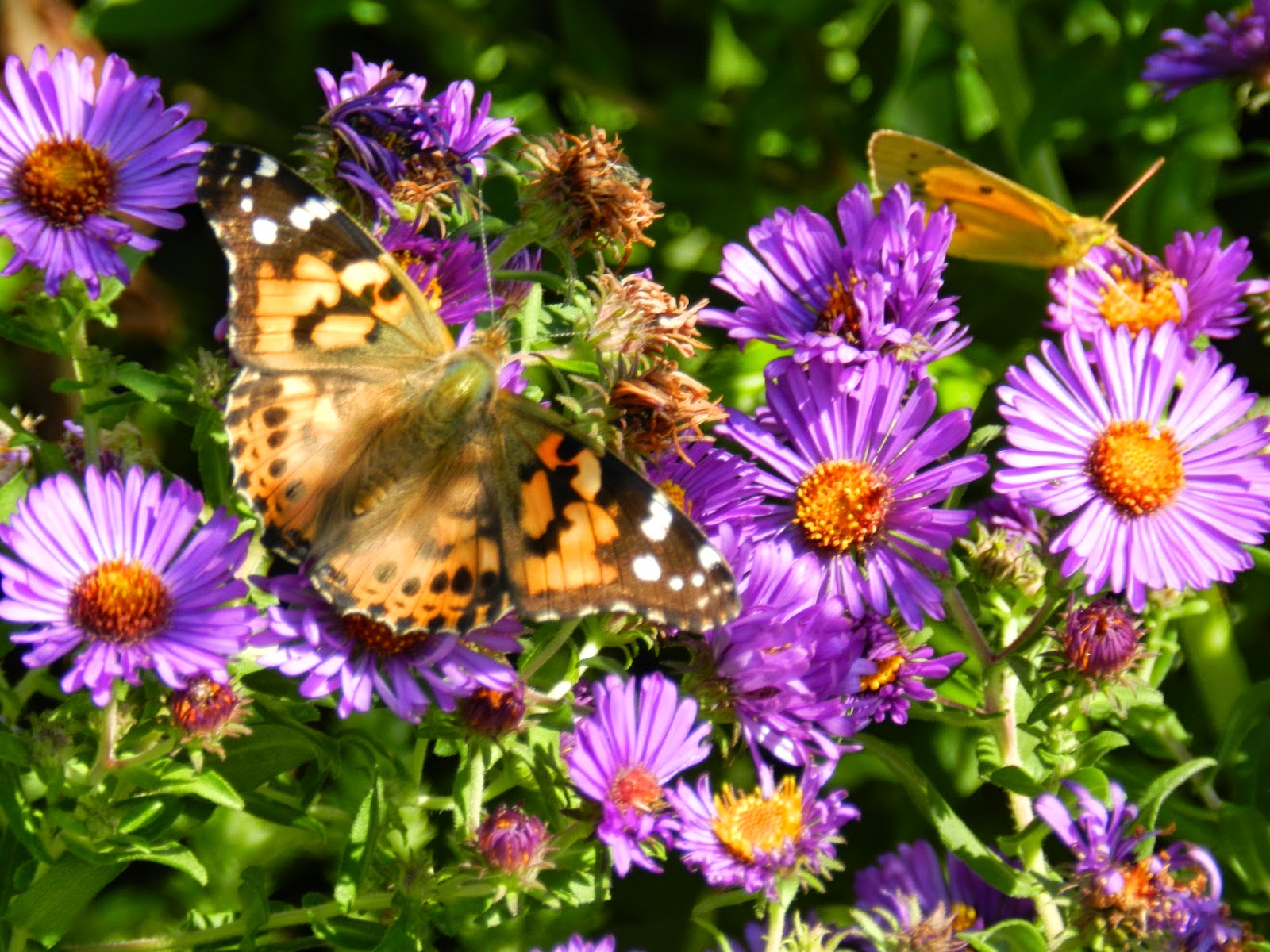 There were also butterflies a-plenty back in September in this little backyard garden, including the late-arriving Painted Ladies, sharing the goodness with the bees. 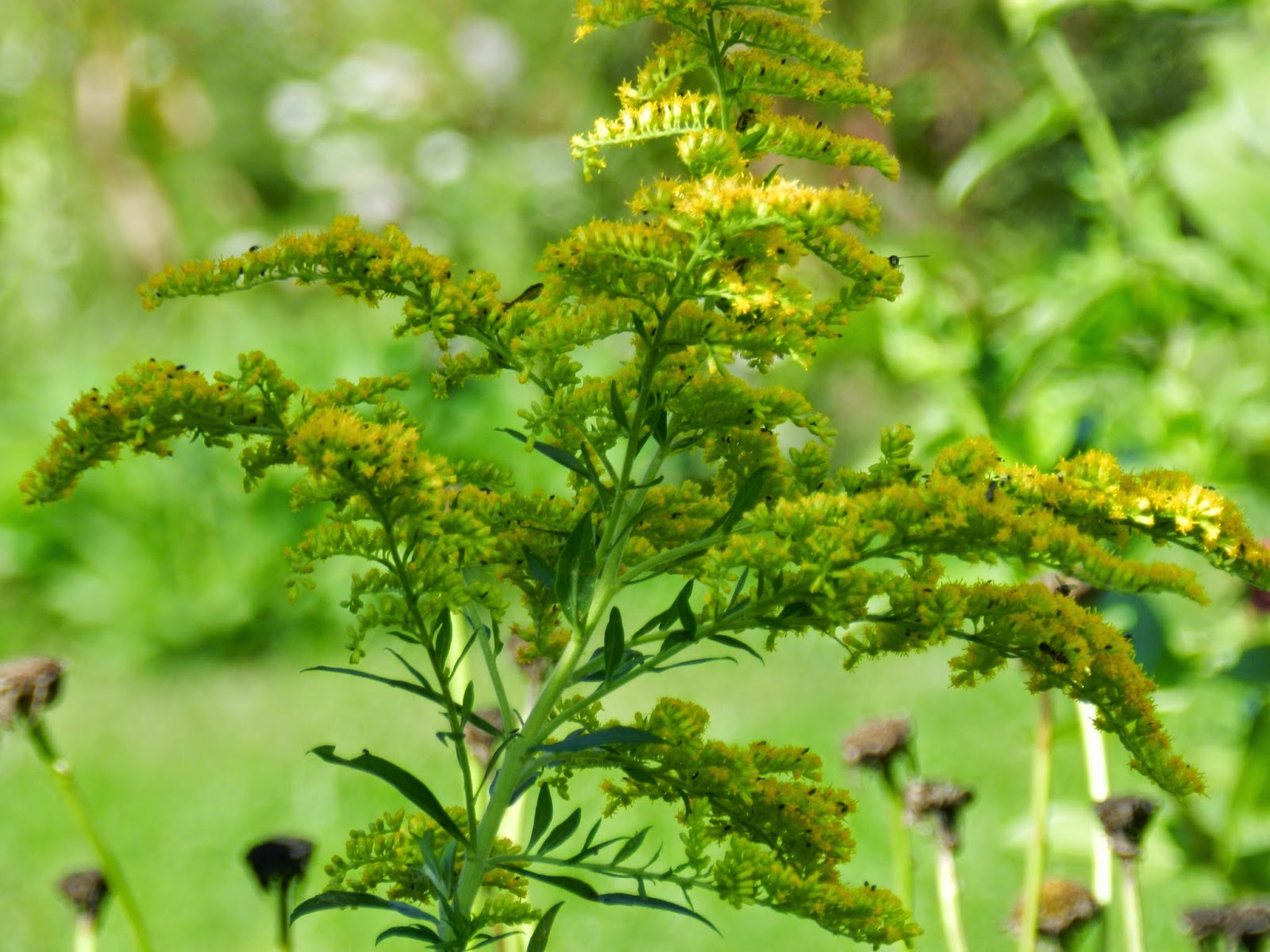 Most of the goldenrod was also blooming back in September, its bright yellow blooms covered with all kinds of little critters. 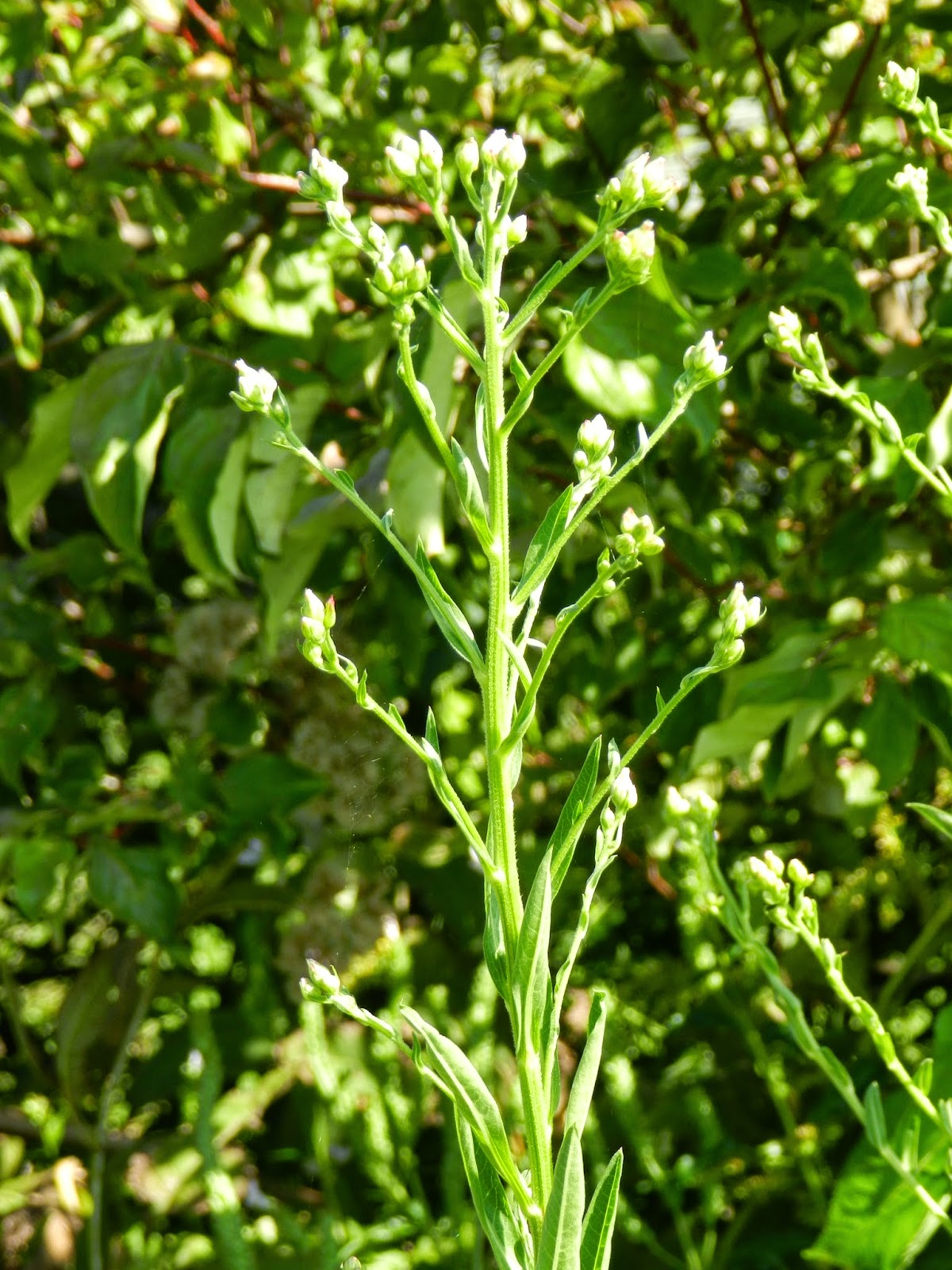 Oh, I could have done a nice little post just on the asters and goldenrod blooming in September.  But you see, I was waiting for something else.  Two tall plants had suddenly, or so it seemed, emerged at the very back of the butterfly garden.  Earlier, I had mistakenly thought they were Obedient Plant, because the stems and leaves looked somewhat similar.  But as they grew and grew, reaching five feet, and began to show small little buds on the top stems, I realized they were something entirely different.  But what were they? 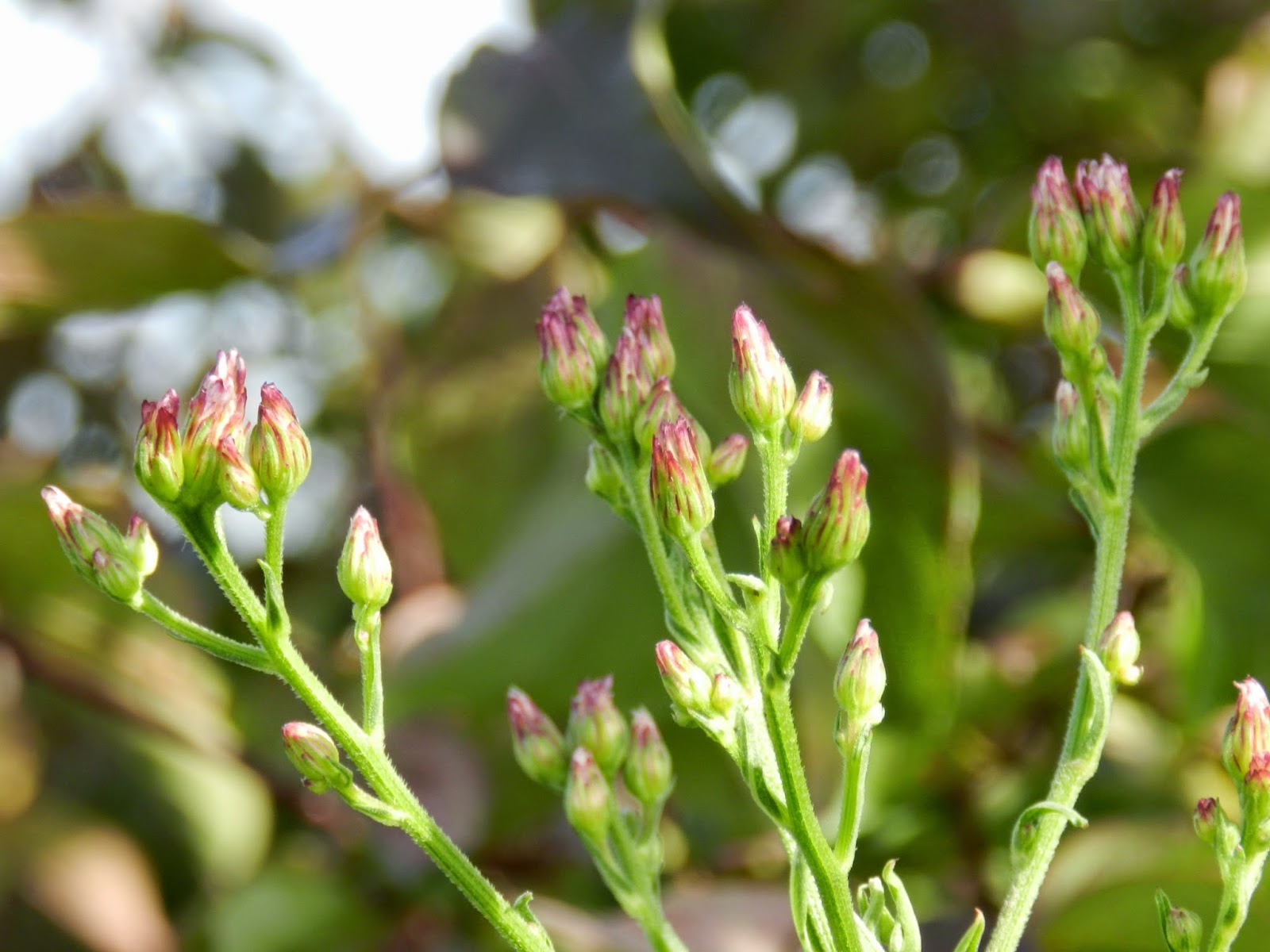 This would make an interesting addition to my Wildflower Wednesday post, I thought, and so I waited as September turned into October.  The buds turned a pinkish cast, but still did not open. 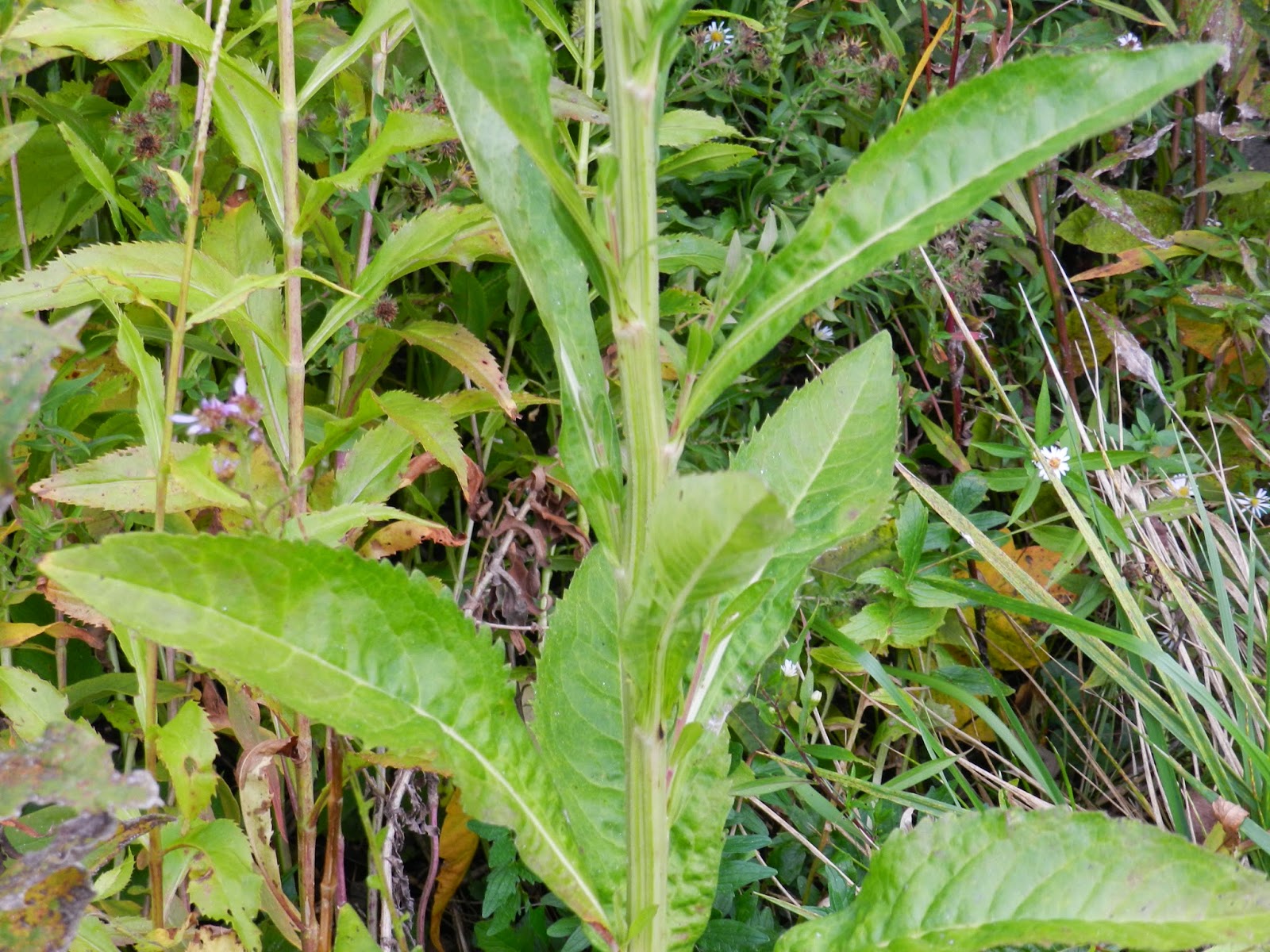 While I waited, I tried to figure out what these two plants could be.  I didn't remember planting anything in this corner, and I searched my garden journal for native plant purchases in the last year or two, with nothing noted that would look anything like this.  I consulted my two favorite wildflower references without much luck either.  Perhaps it was an Aster tataricus,  a tall, late-blooming aster.  But the leaves are alternate, and one source said this aster's leaves were opposite.  Could it be a Vernonia, or Ironweed, which does have alternate leaves?  I began to hope it was Ironweed, a plant I've always wanted to add to this area.  Only time would tell .  . . 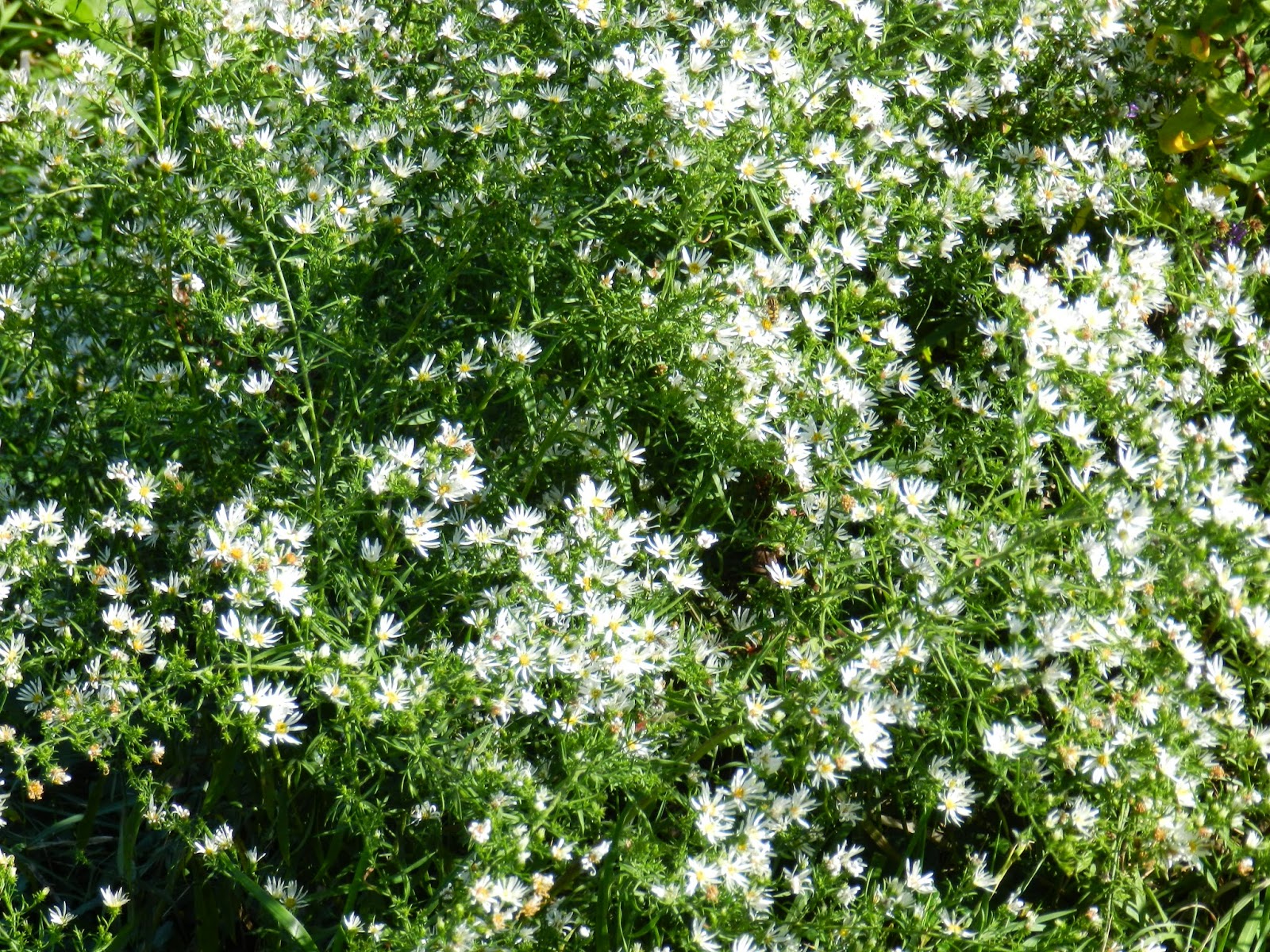 While one week turned into the next, another flower suddenly burst into bloom at the front of the butterfly garden.  This wildflower is no stranger here, usually appearing in the fall in various places around the outbuildings.  Some time ago  I identified this as a Aster pilosus or Frost aster, also called a Hairy Aster, though I'm not 100% positive that is correct. 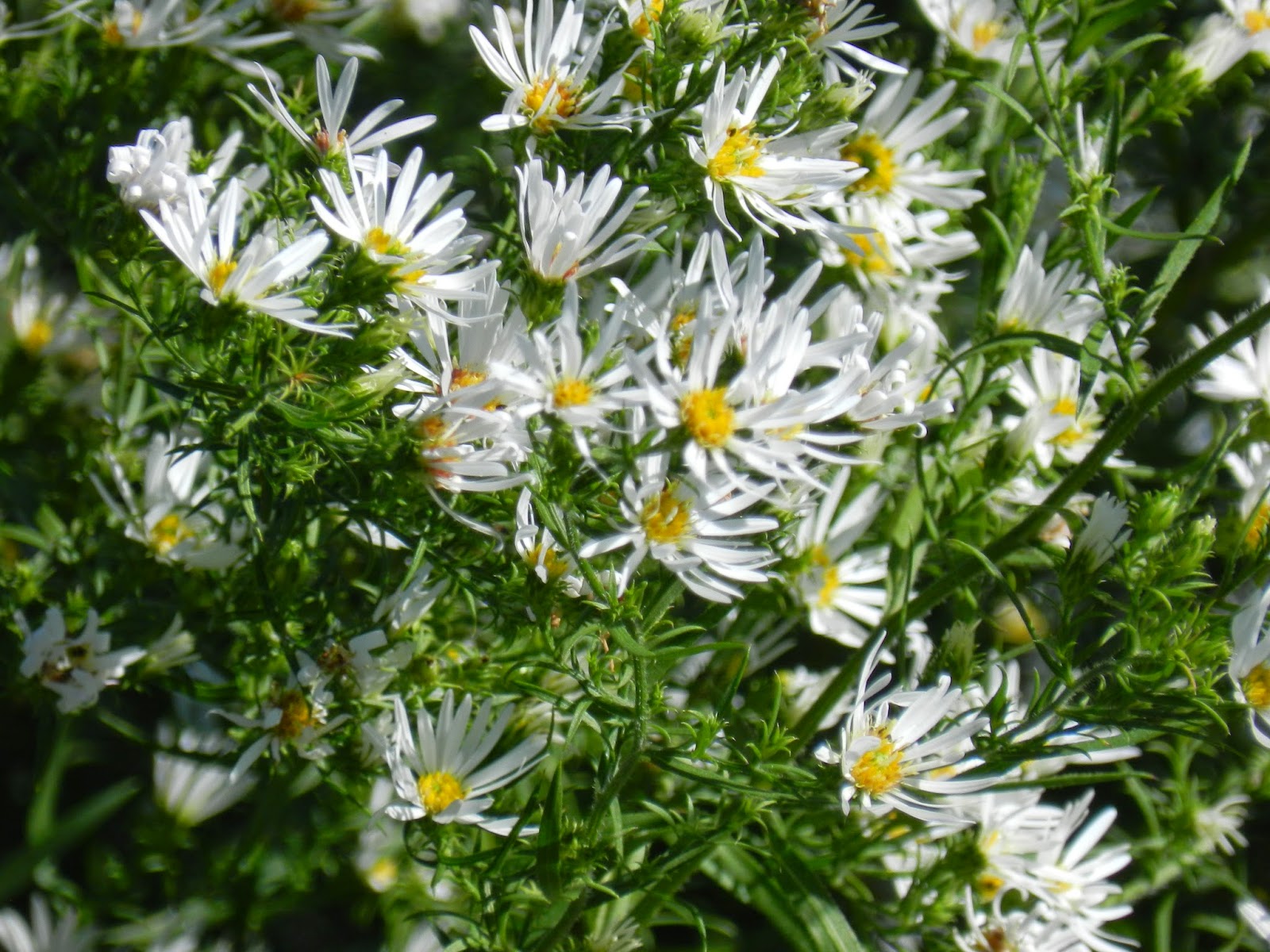 This is definitely a weedy wildflower and not to everyone's taste.  I usually pull them when they appear throughout the garden, but I was too lazy didn't have time to pull this one before it bloomed, and I'm actually glad I left it alone.  The bees don't care whether it's some fancy type of aster or a weedy one.  Meanwhile, back to the mystery plant . . . 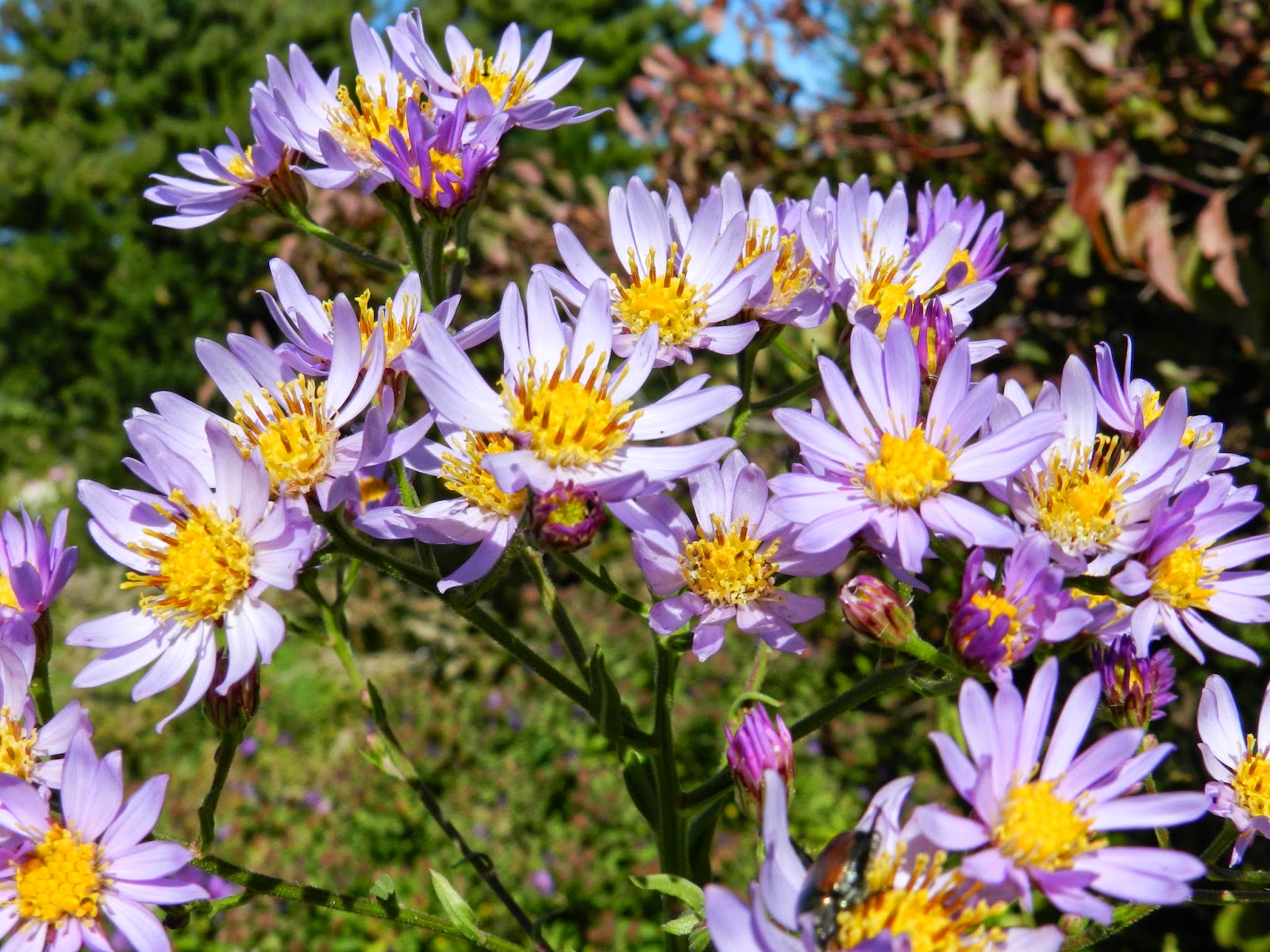 After weeks of waiting, the blooms on my tall mystery plant finally appeared.  Definitely not Ironweed!  The blooms are those of an aster, but what kind? 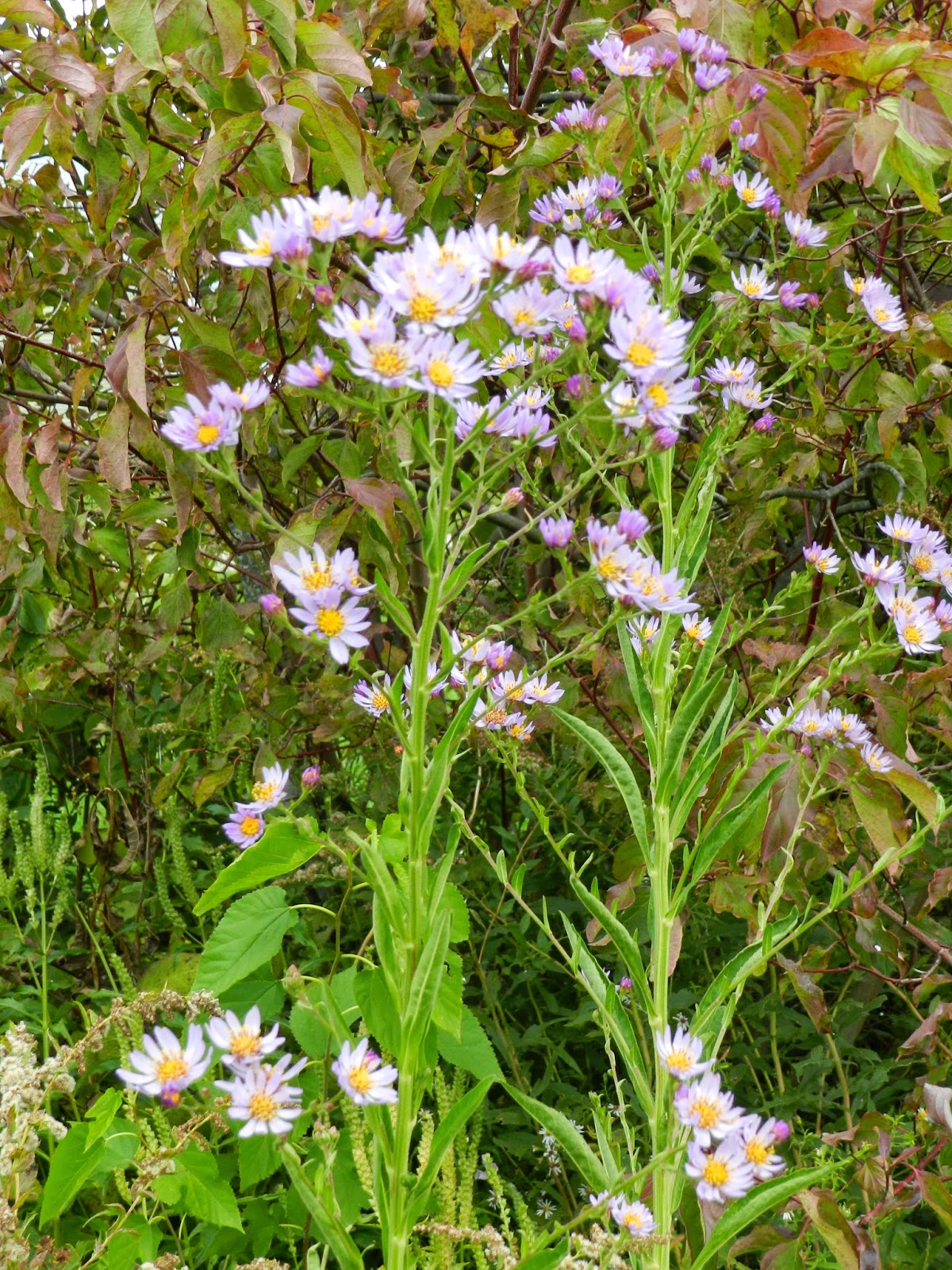 Perhaps it's an Aster tataricus, but it doesn't quite look like the images I've found.  I have trouble distinguishing one aster--or Symphyotrichum for botanical purists--from another.  Its tall, sturdy stem sways in the breeze, but doesn't bend; it's nice to have a tall plant at the back of the garden that doesn't need staking. The asters in the early photos have long since faded to brown, but after two weeks, this maybe-aster is still blooming, and I am no closer to solving the mystery of its identity.  I also haven't solved the mystery of how it came to be in my garden.  Perhaps it's just another of the many gifts I receive each year from the birds sharing seeds with me.  Whatever this plant is, I'm enjoying its late blooms in my garden.


Wildflower Wednesday is hosted the fourth Wednesday of every month by Gail of Clay and Limestone.
Posted by Rose at 7:47 PM