Mid-August.  The dog days of summer.  Usually about this time of year, I am whining about the heat and humidity and ready for the cooler days of autumn.  But not this year.  Sure, we've had some hot weather, but very few really miserable days and no long stretches of overbearing heat, as we have had the past few summers.  In fact, the last two weeks have felt more like fall, and I am loving it!  With such beautiful weather, you would think I would have my garden in top shipshape--I only wish.  I'm blaming it on all the rain we've had this summer (except for the past few weeks), which has been wonderful for the garden, but has also been a boon to the weeds.  That's my excuse anyway.

If you will overlook the weeds and the lack of deadheading, let's take a walk around and see what is blooming today. 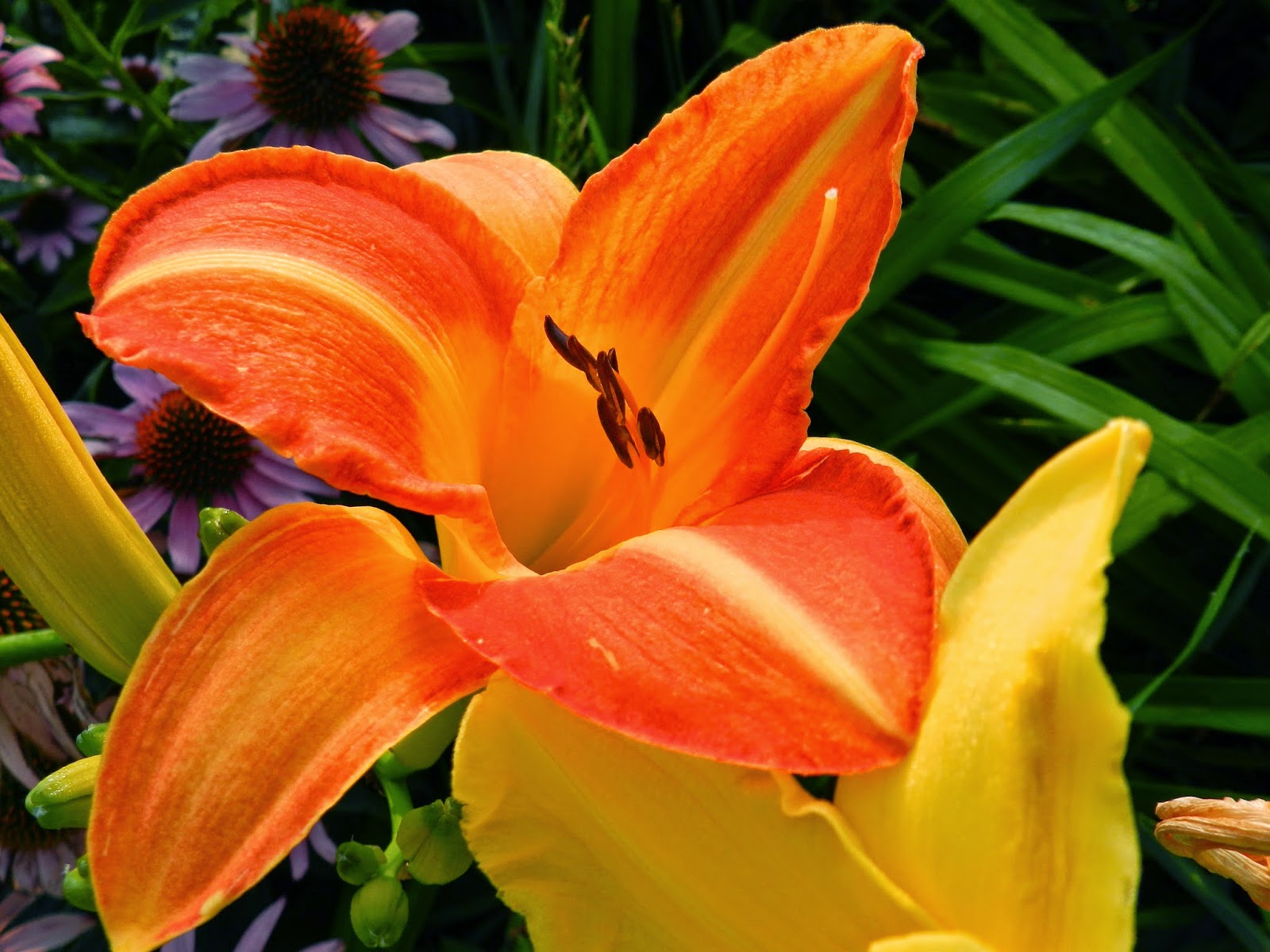 My July Bloom Day post was one I started before I left for Portland, and since I didn't have much time to add much else when I returned, I focused on just the purple coneflowers in my garden.  But what I neglected for the very first time in all my summer blog posts over the years was a showcase of all the lily blooms.  Although there are a few stray blooms here and there, most of them have finished for the season, except for two latecomers.  'Andrea's Dragonfly,' above, was the last to start blooming. 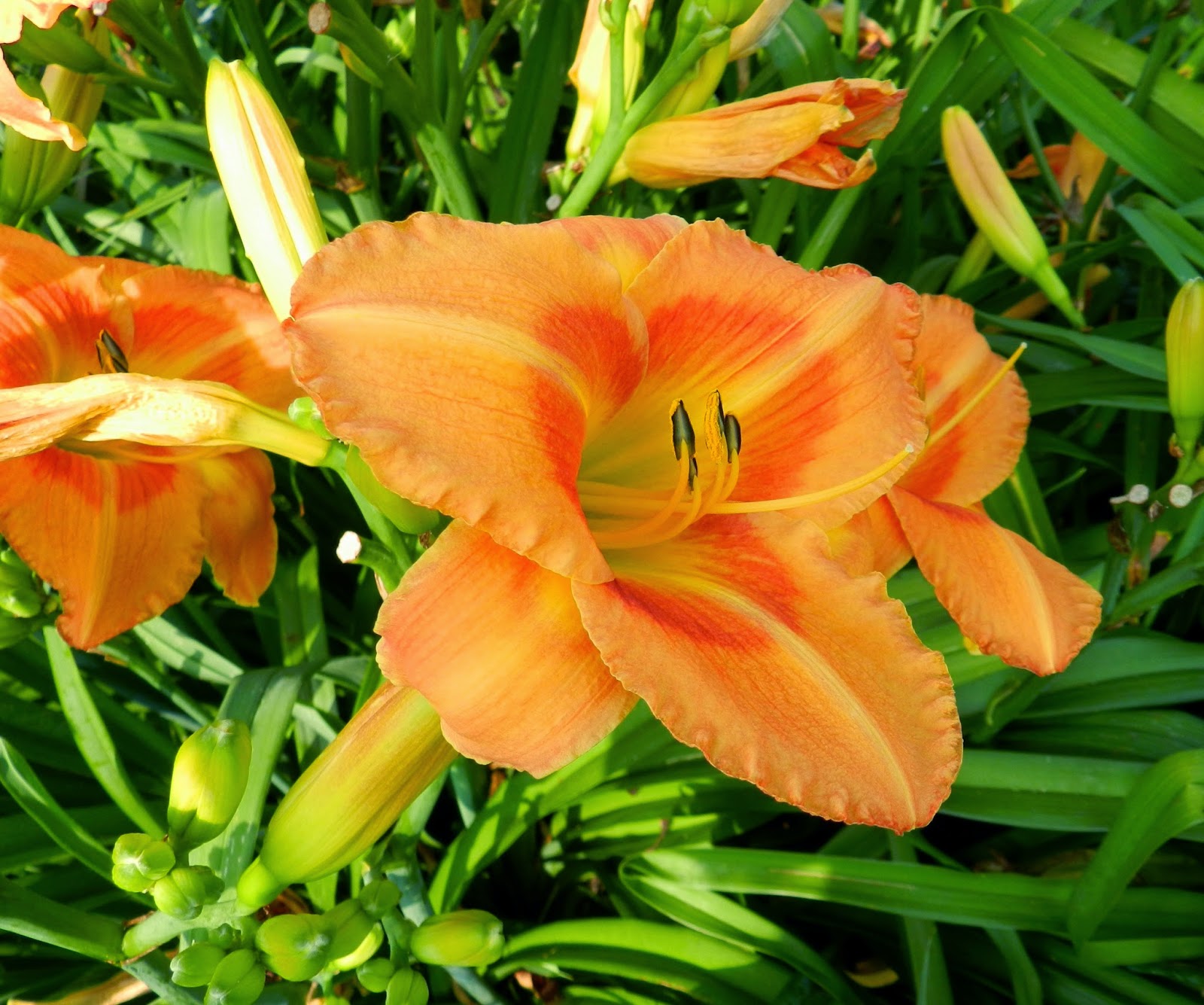 'Dragonfly Corner' has been putting out even more numerous late blooms.  Both of these are unnamed hybrids that my friend Beckie named and shared with me in the last couple of years.  It's a good thing they are separated in the garden, or I'm sure I wouldn't remember which was which. 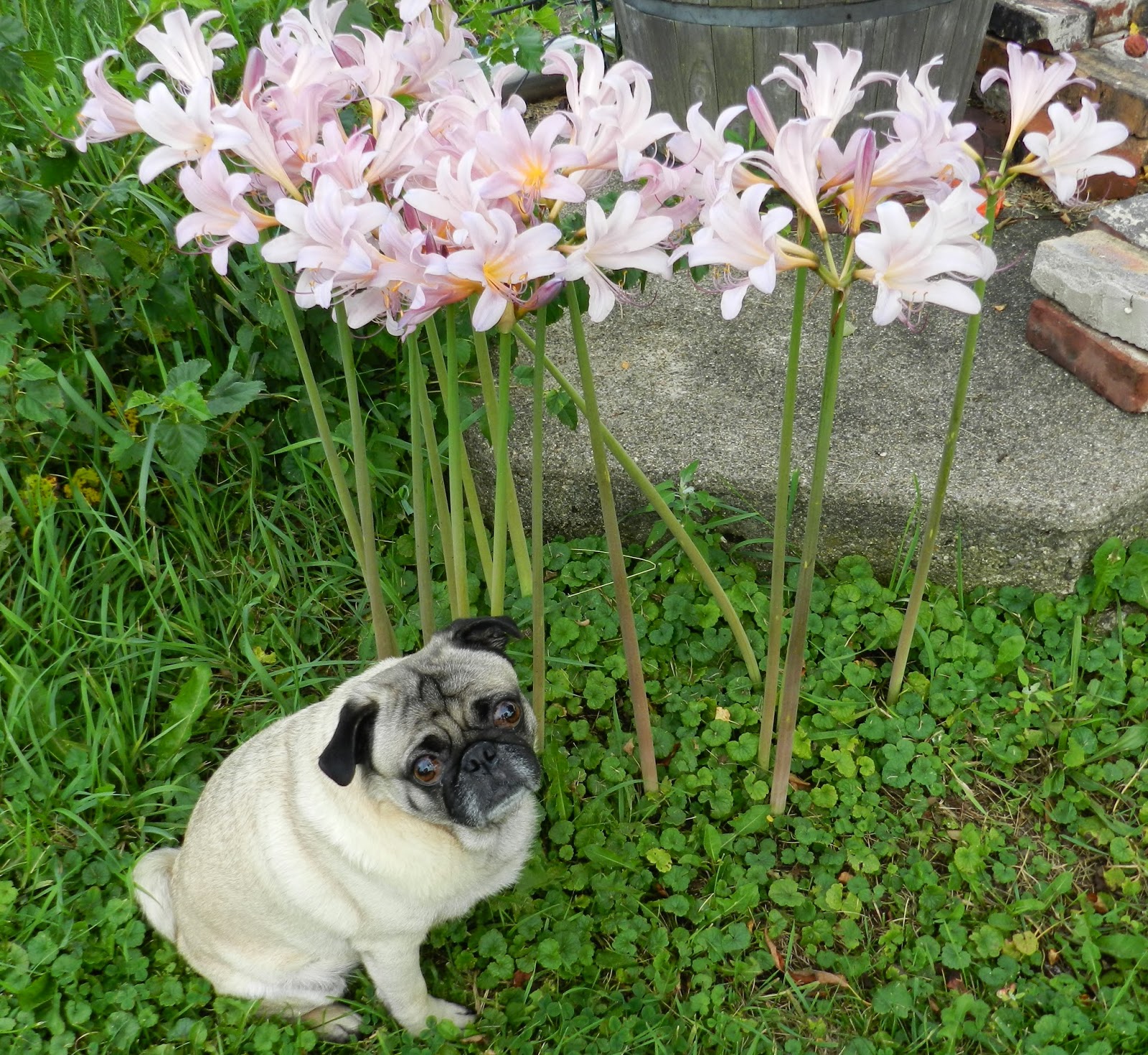 Not a true lily but a member of the amaryllis family, the Surprise Lilies were in full bloom a week ago, but have only a few straggling petals left today.  I'll probably forget by next summer where they are, but I'm pretty sure Frank marked the spot:) 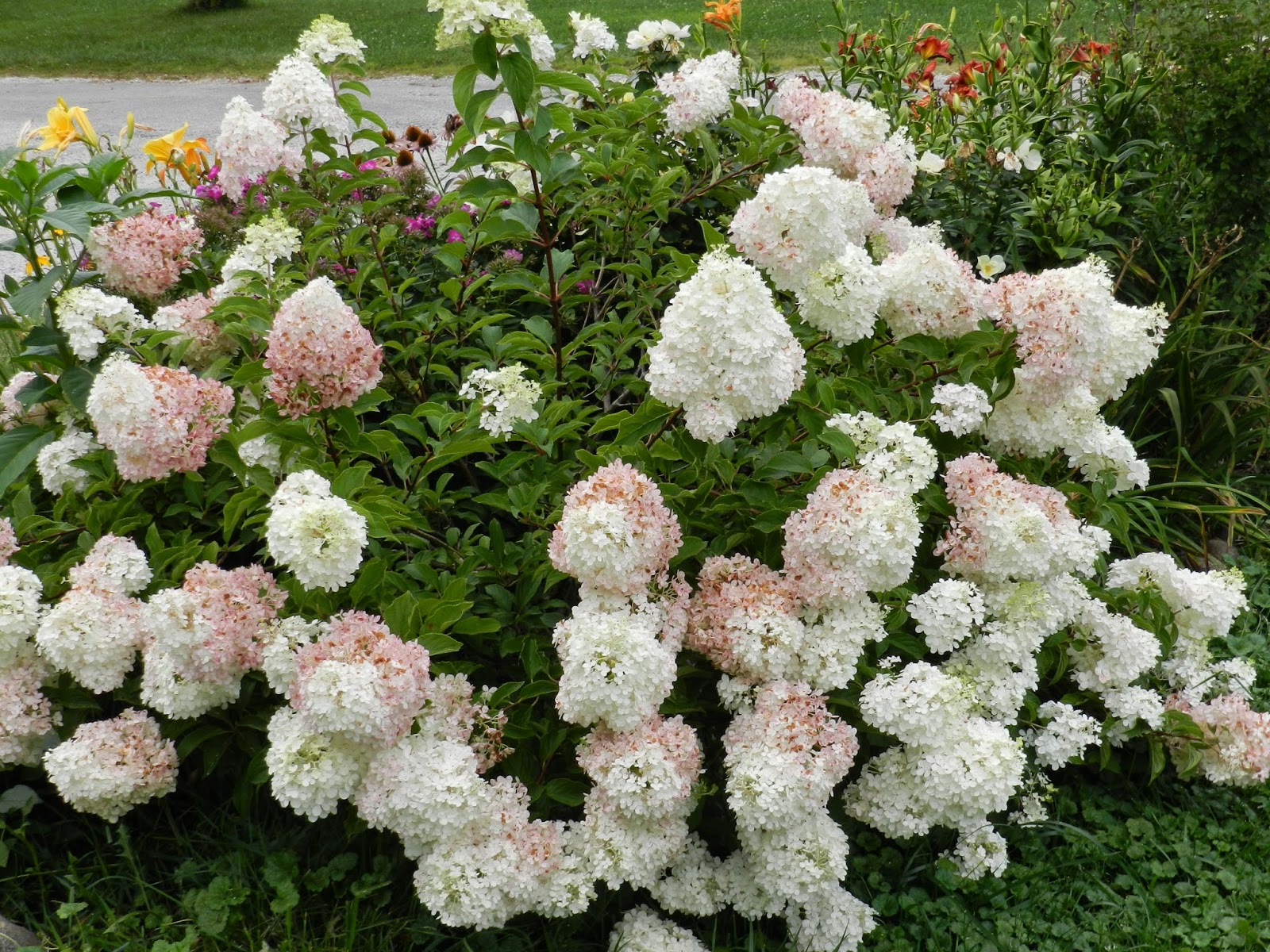 The 'Vanilla Strawberry' Hydrangea has never looked as good as this year.  My only complaint is that all those blooms have made the branches bend over. 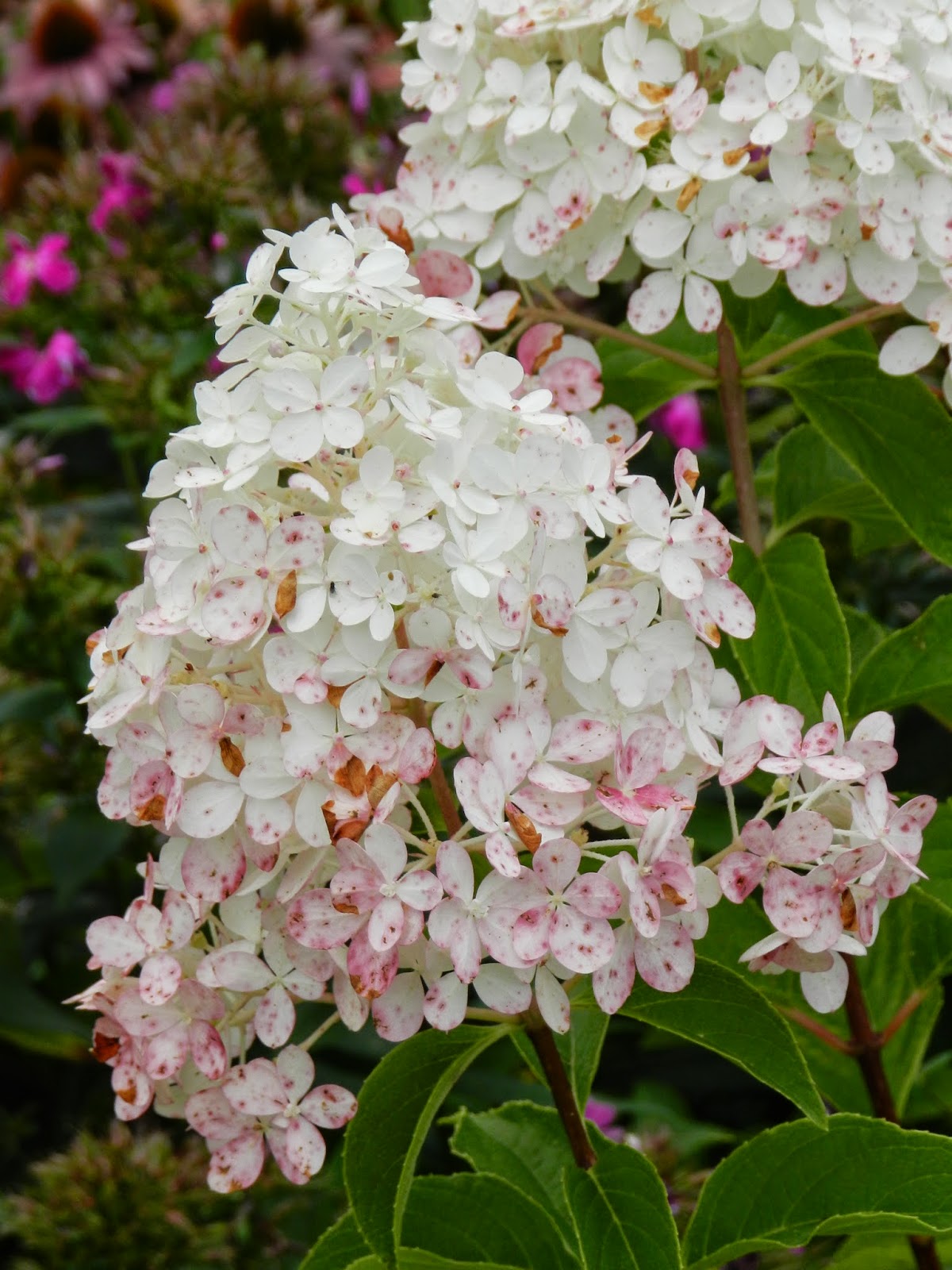 The bottom of the blooms gradually turn pink, but then they quickly turn brown, too--making the blooms look more like a vanilla-strawberry-chocolate ice cream cone. 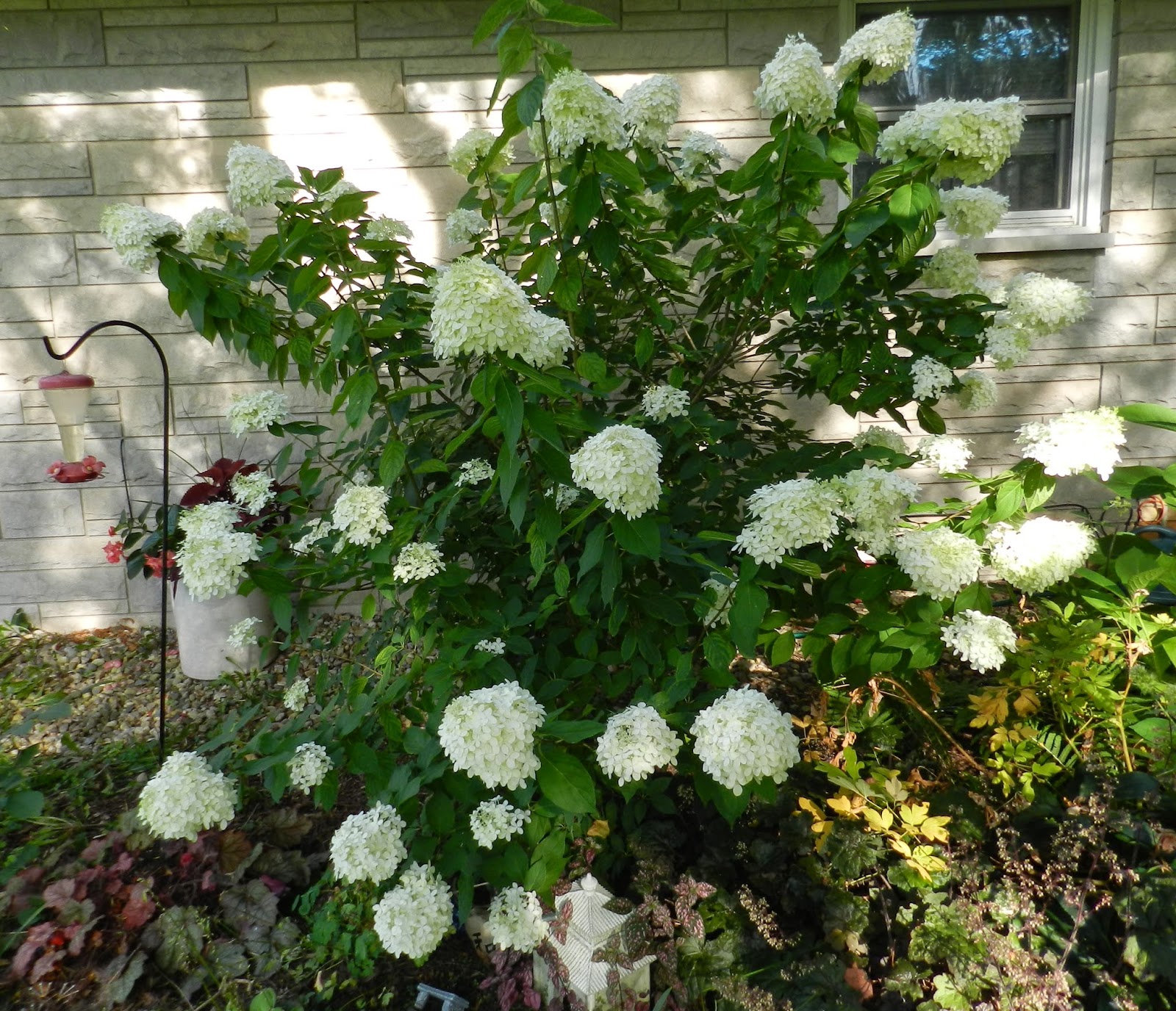 Next to the shade garden in front of the house the 'Limelight' is blooming its head off, too.  I can never get a good photo of the whole plant, but this picture does show what I found out early this summer--my spring pruning was not nearly ruthless enough.  This is my favorite hydrangea, but it is sprawling out of control. 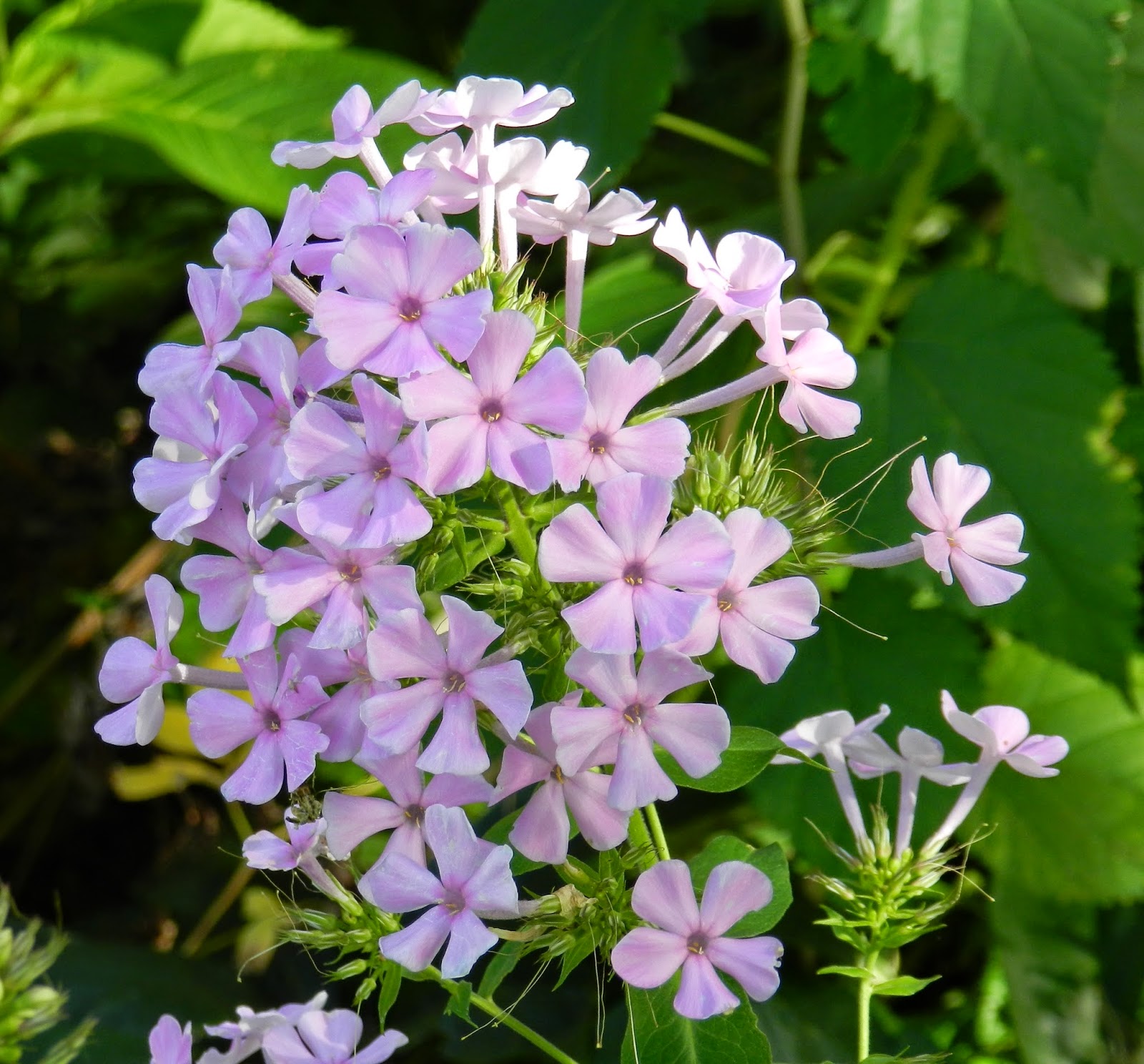 In the shade garden, the volunteer phlox has not only re-appeared, but a second stand of these has popped up this year. 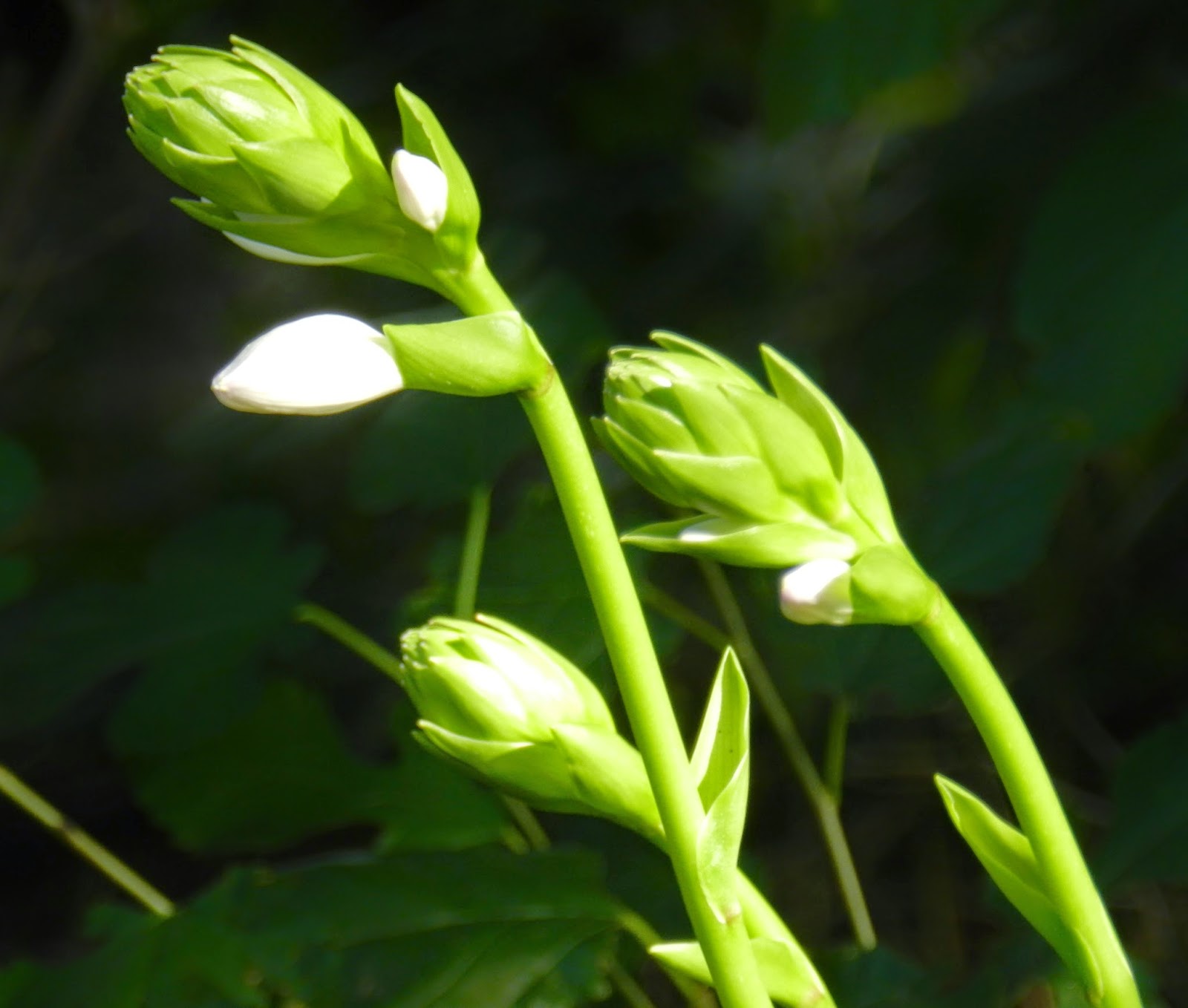 The plainer hostas--Plantain lilies, I believe--are not my favorite, but they do have the most beautiful blooms, which are about to open up. 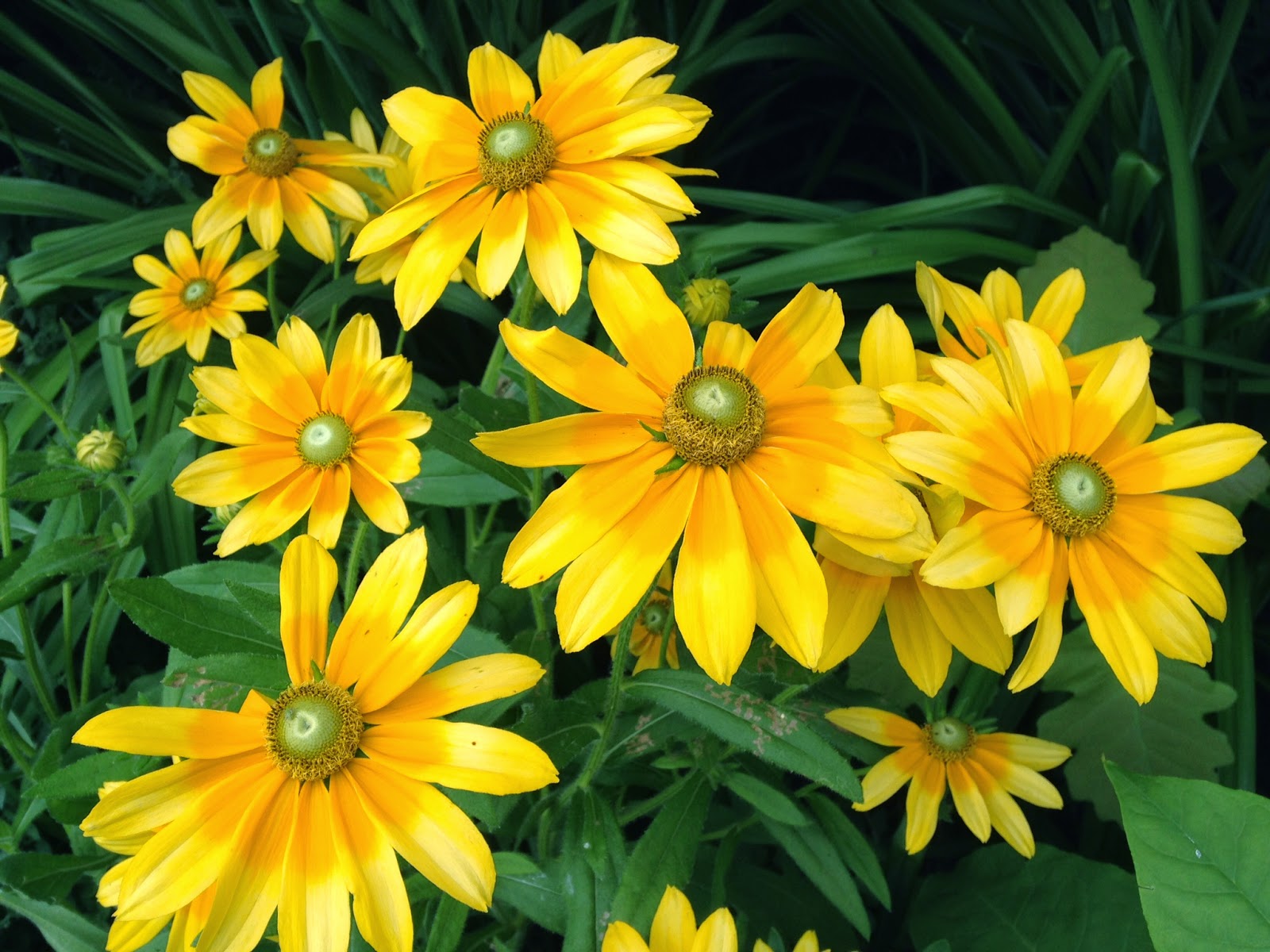 There are Black-eyed Susans and Brown-eyed Susans in different parts of my garden, but one of my favorite Rudbeckias is this 'Prairie Sun.'  Like other Rudbeckia hirtas, it is a short-lived perennial or biennial, but it can re-seed.  I planted a few seedlings that I started from seed, but for the first time, I had some come back from last year as well. 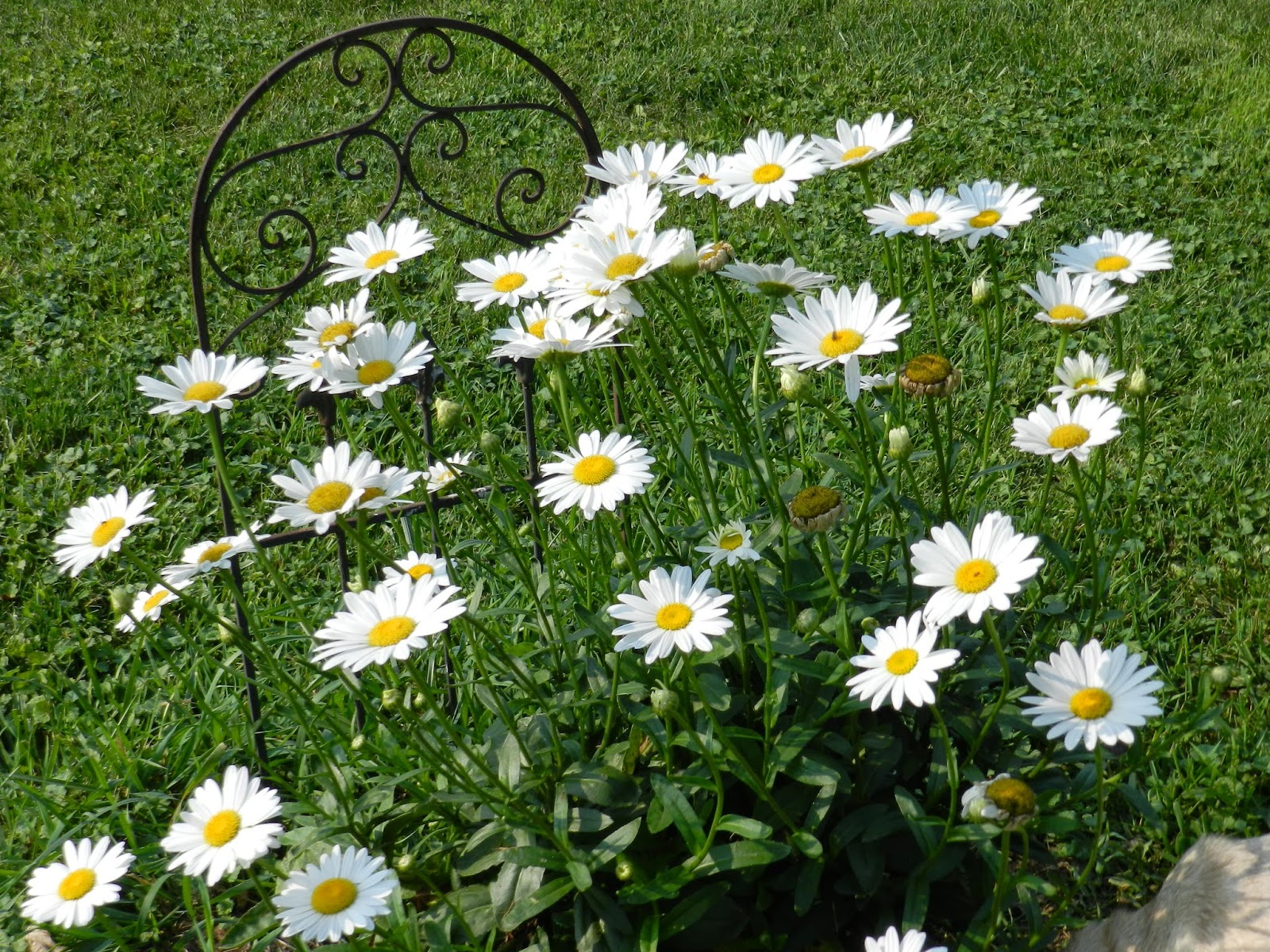 Elsewhere, the 'Becky' daisies in Roco's memorial garden are doing very well.  This is a new start I had to plant this spring, since last year's plant died.  The original mother plant in the arbor bed is probably five times this size. 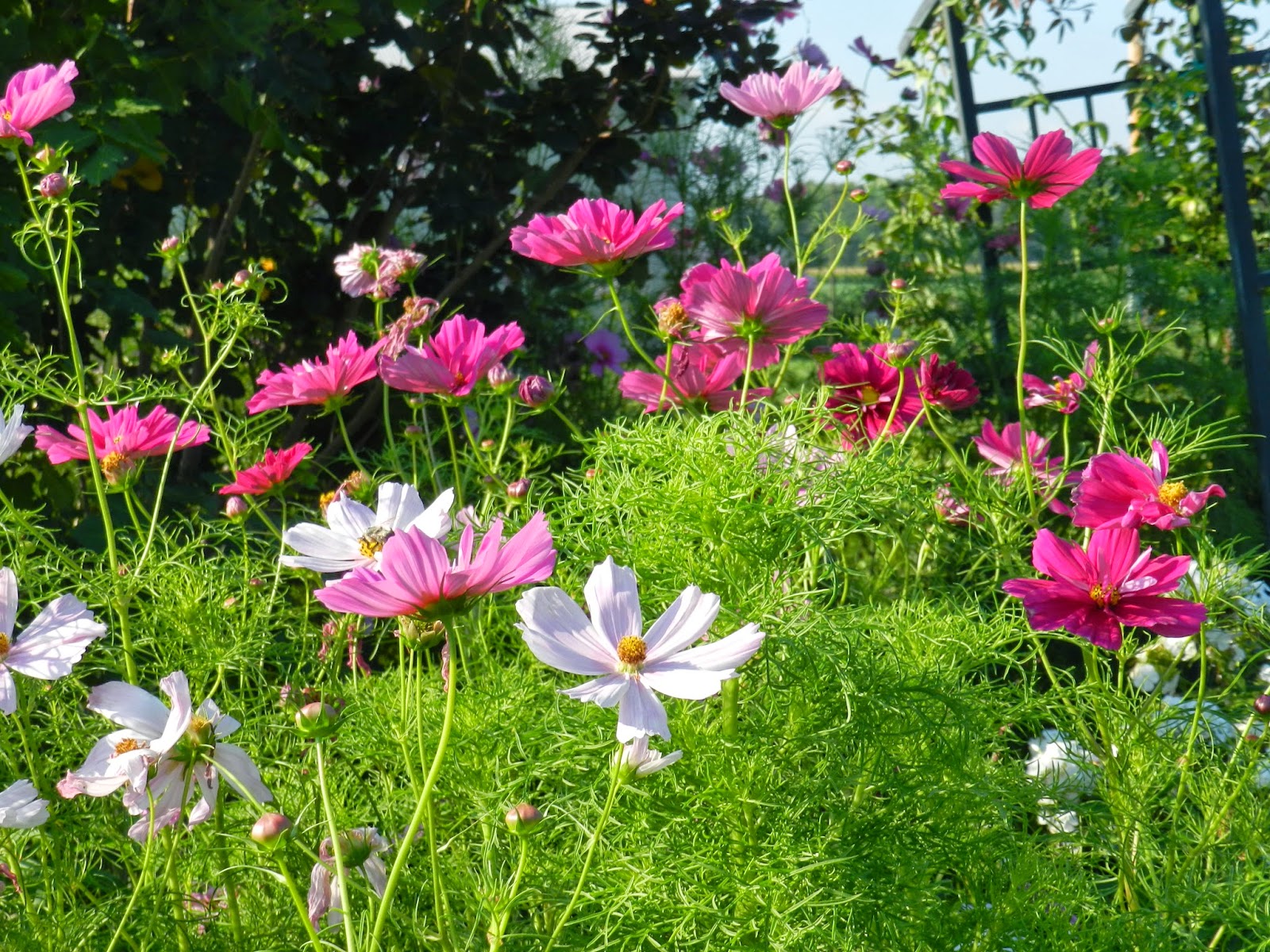 The arbor bed is a jungle once again, mainly because I can't resist planting more annuals than I have room for each year.  Cosmos, all from direct-sown seed from Renee's Garden, are one of my old-fashioned favorites. 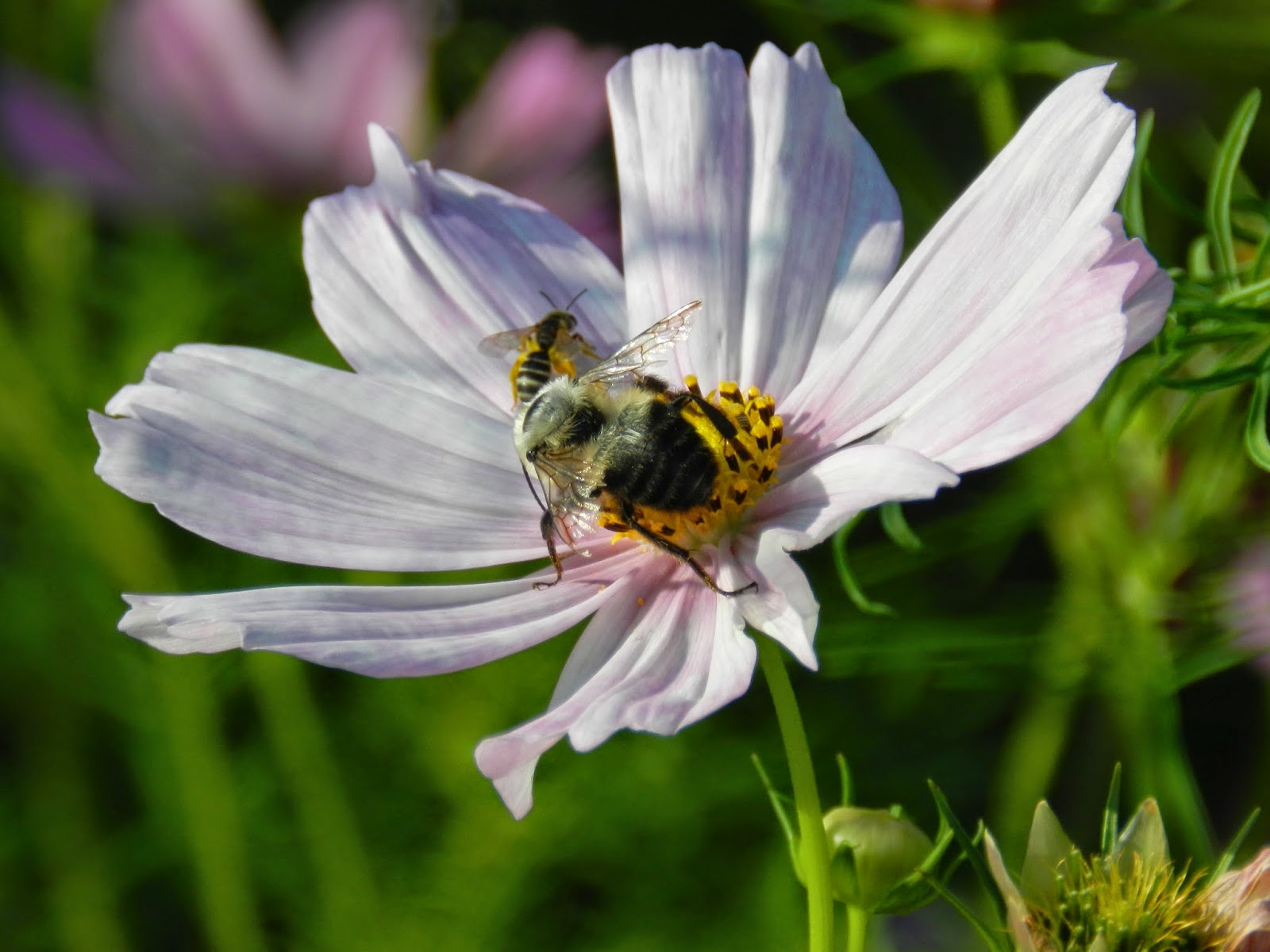 I'm not the only one who loves these blooms, as you can see.  The funny thing is, I was trying to get one good photo of this bumblebee, but it wasn't until I downloaded my pictures that I realized he had a friend! 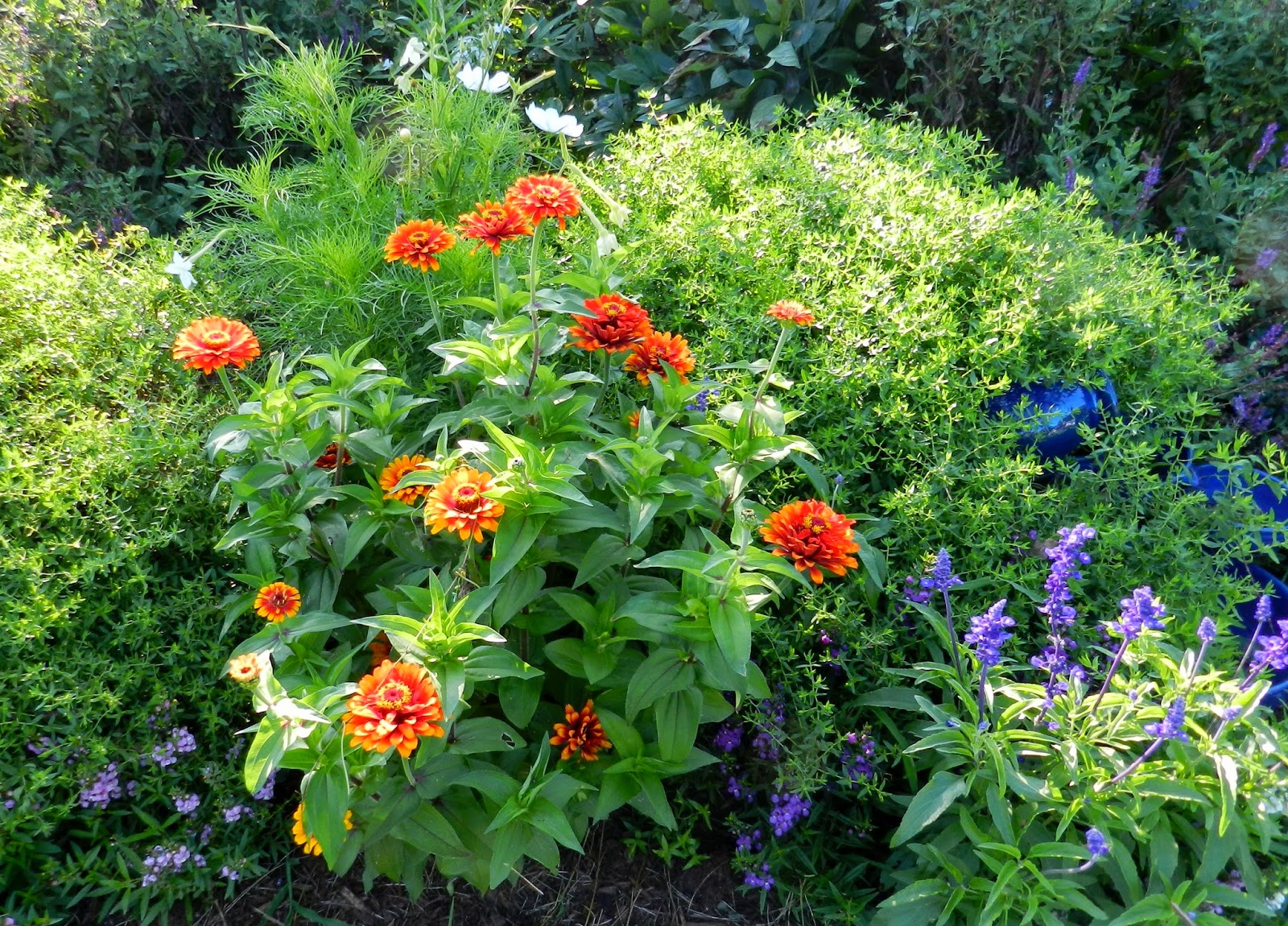 Another favorite annual I've been planting from seed the past few years is this 'Zowie Yellow Flame' zinnia.  I'm sure you'll see these again in another Bloom Day post, because they look good all the way until frost. 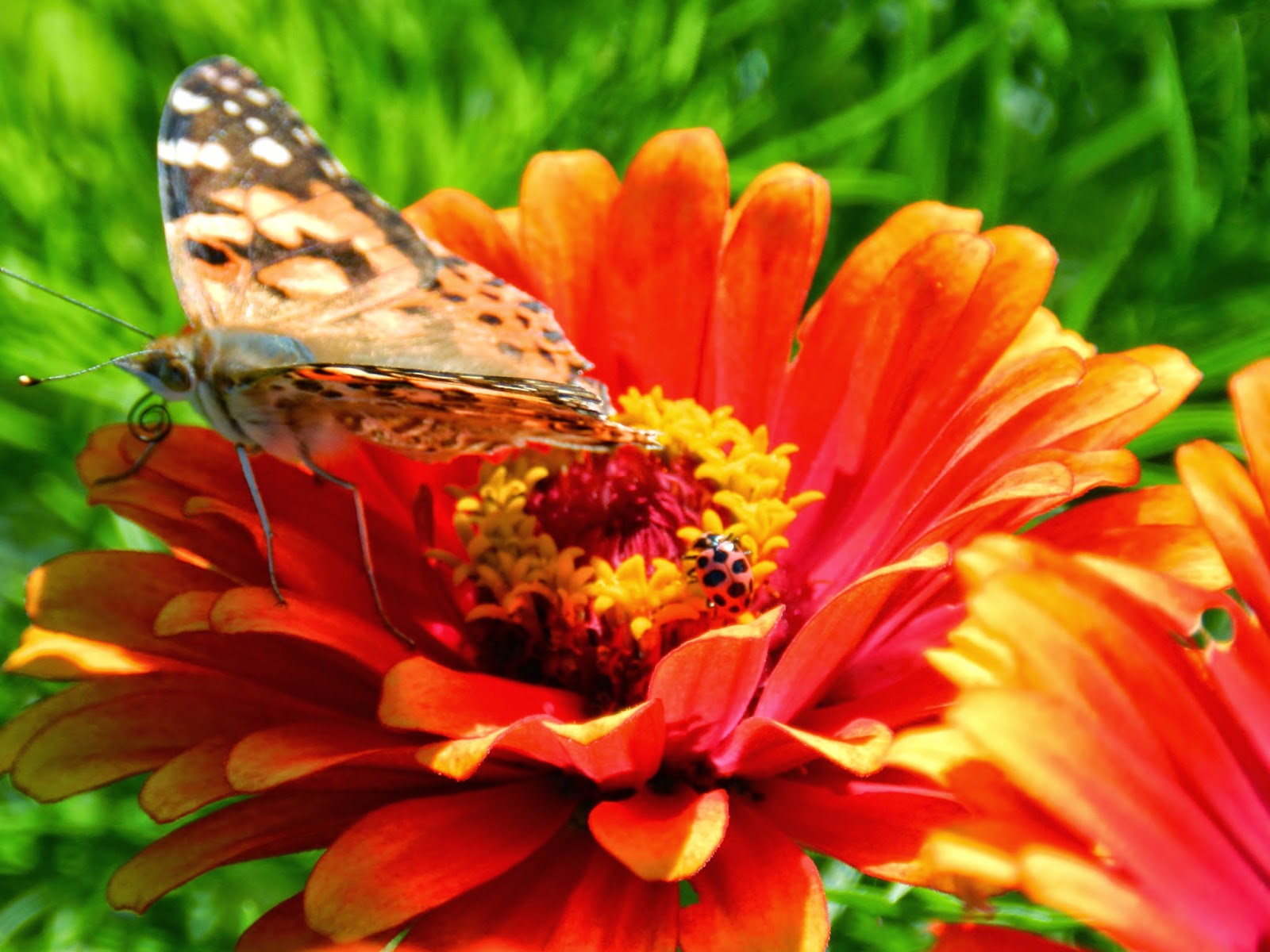 Another two-fer shot. Ms. Ladybug also escaped my notice as I tried to focus on the butterfly. 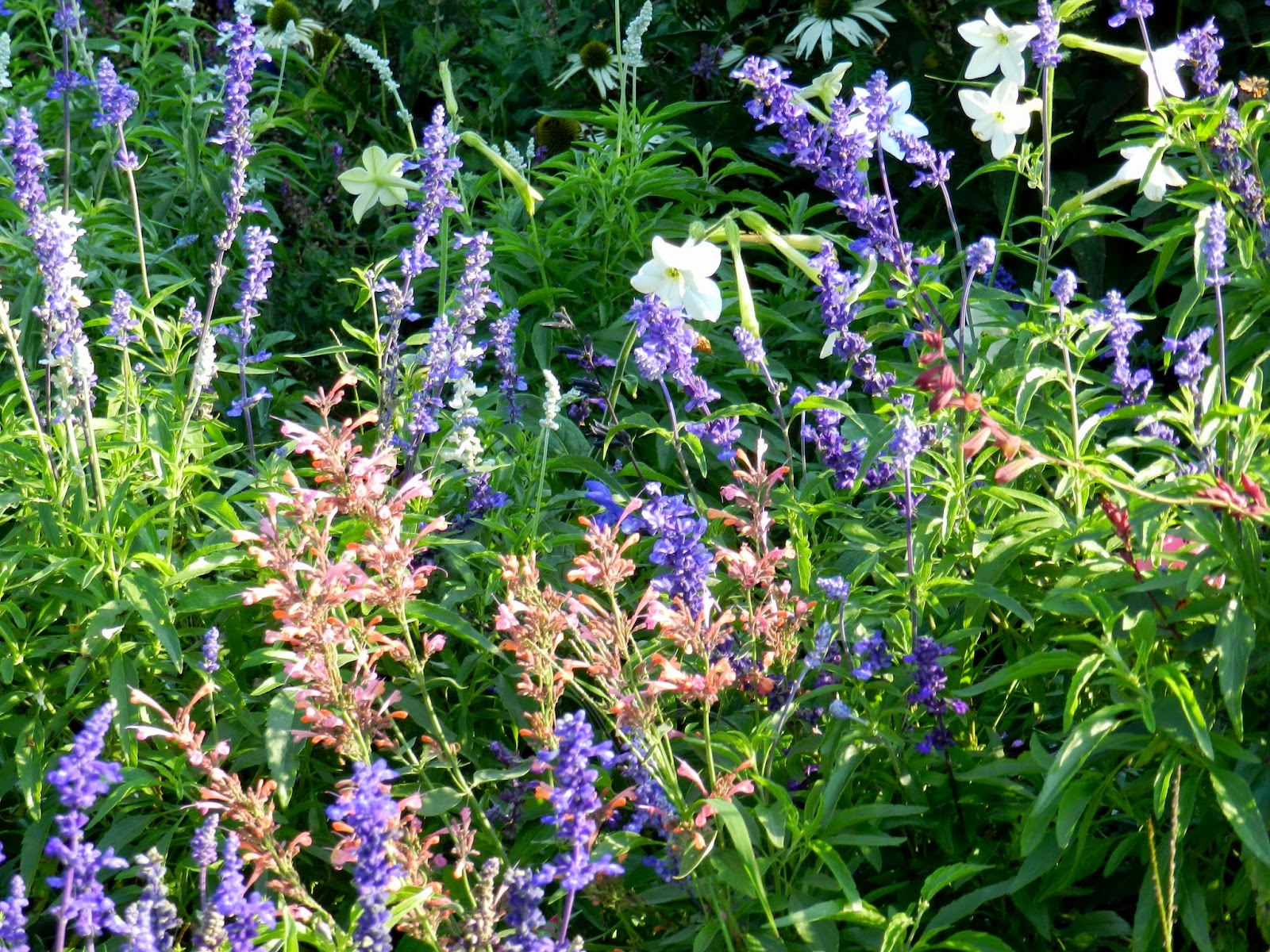 A good example of the "jungle"--I planted the Agastache in the middle and a few of the 'Victoria Blue' salvia, but many of the salvia are volunteers, surprising after the winter we had.  The Nicotania are also volunteers--I planted seeds three years ago, and they keep coming back!  Except for the native blue Agastache, most of the cultivars do not like our winters, so they are more of an annual here.  I plant them every year, nevertheless, because the hummingbirds love them.  In fact, I took a dozen photos of a hummingbird enjoying the Agastache yesterday, but unfortunately was rewarded only with blurry images. 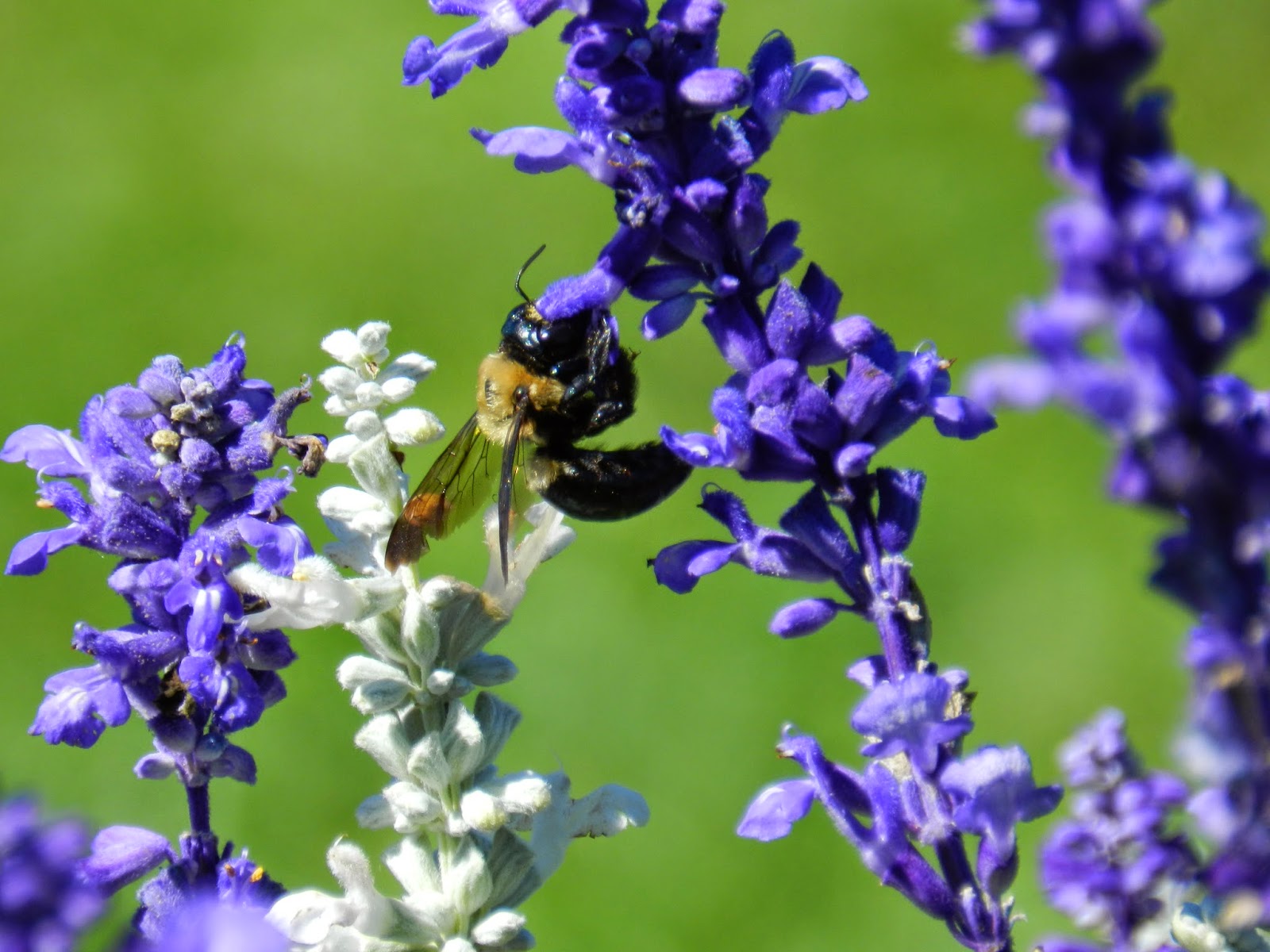 The bumblebees are more cooperative, thank goodness.  This one is enjoying the 'Victorias.' 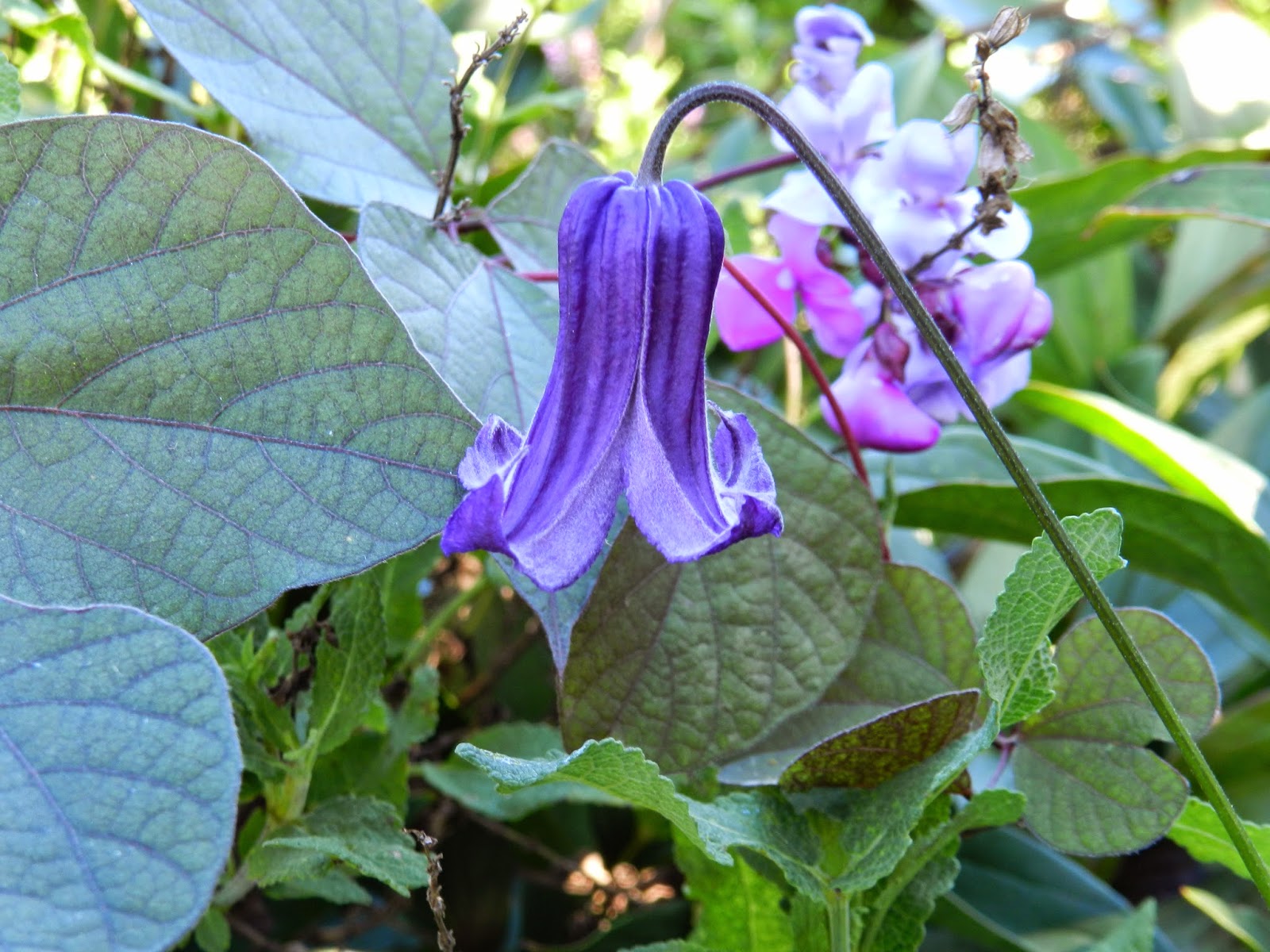 A new bloom I'm excited to see in my garden this year is the new clematis I planted next to the arbor trellis.  I love these little bell-shaped blooms on 'Roguchi.'  I'm glad, too, it has survived some stiff competition from the volunteer hyacinth bean vine and the cardinal vine, which has spread everywhere. 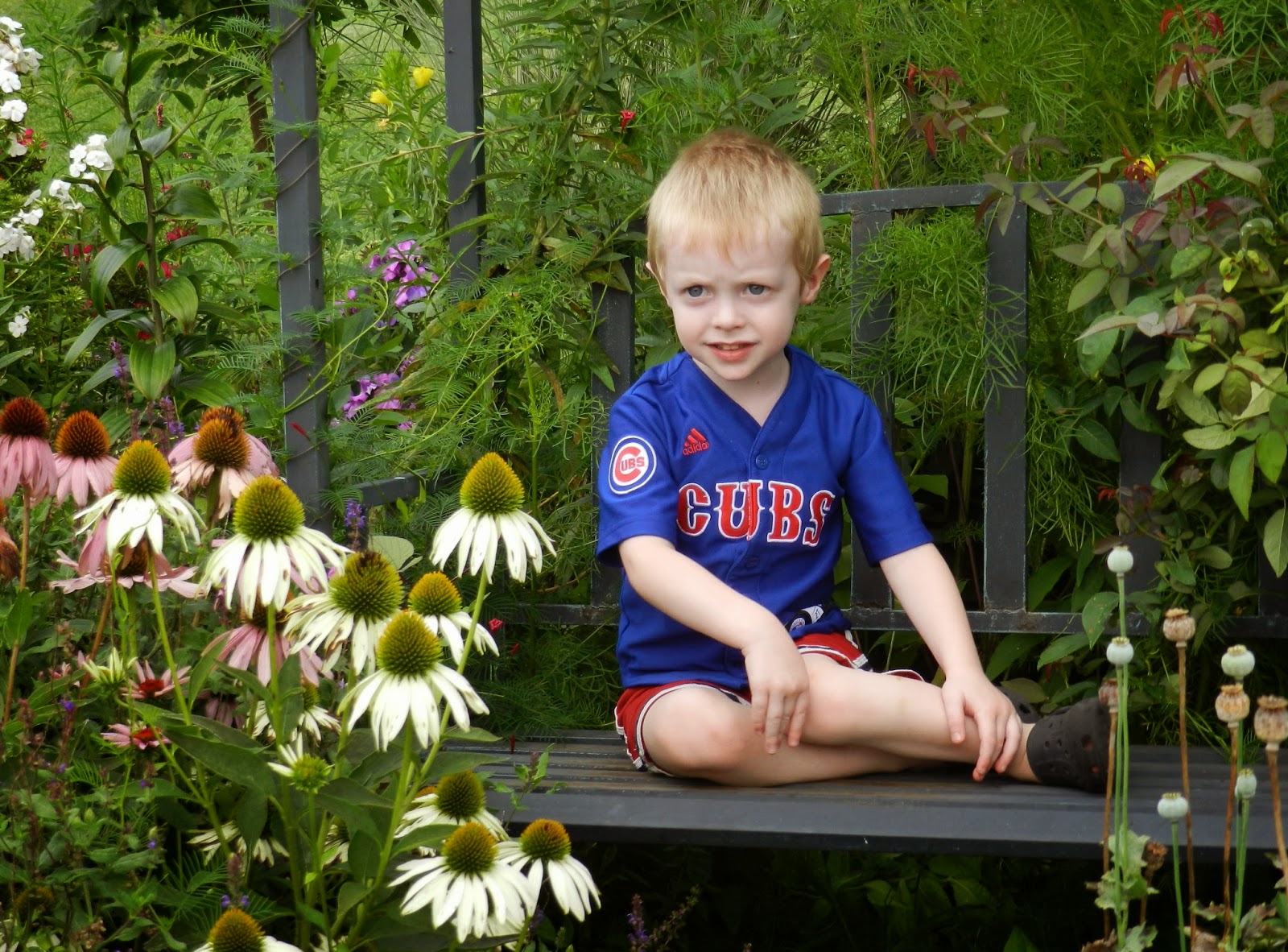 Despite the jungle, my youngest grandson found the perfect seat one day--
yes, this is my favorite bloom of all! 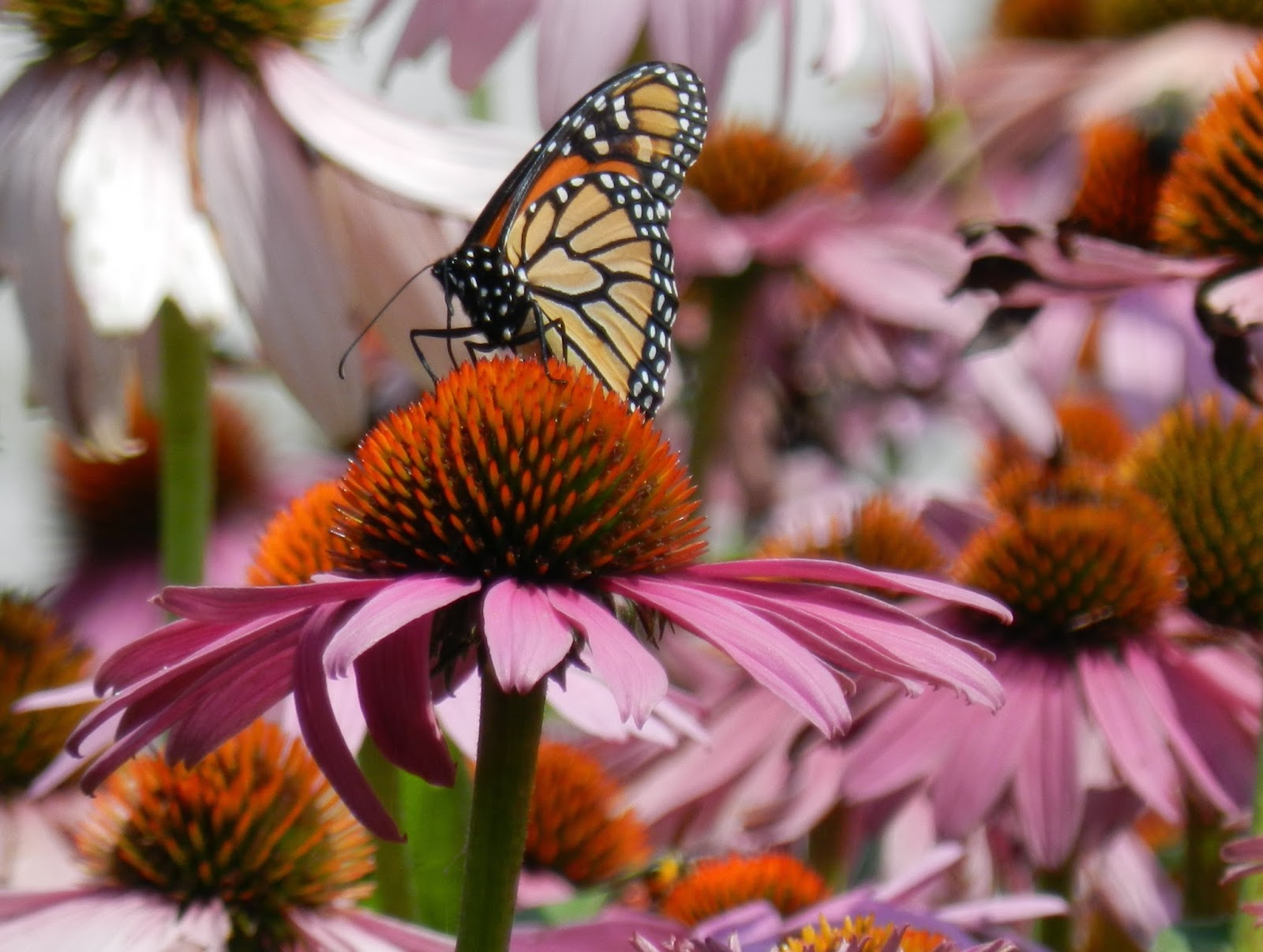 And what about all those coneflowers I showed in July?  Well, some are looking a little tattered and faded, but they're still here.  I've deadheaded a few, but there are just far too many to keep up with. 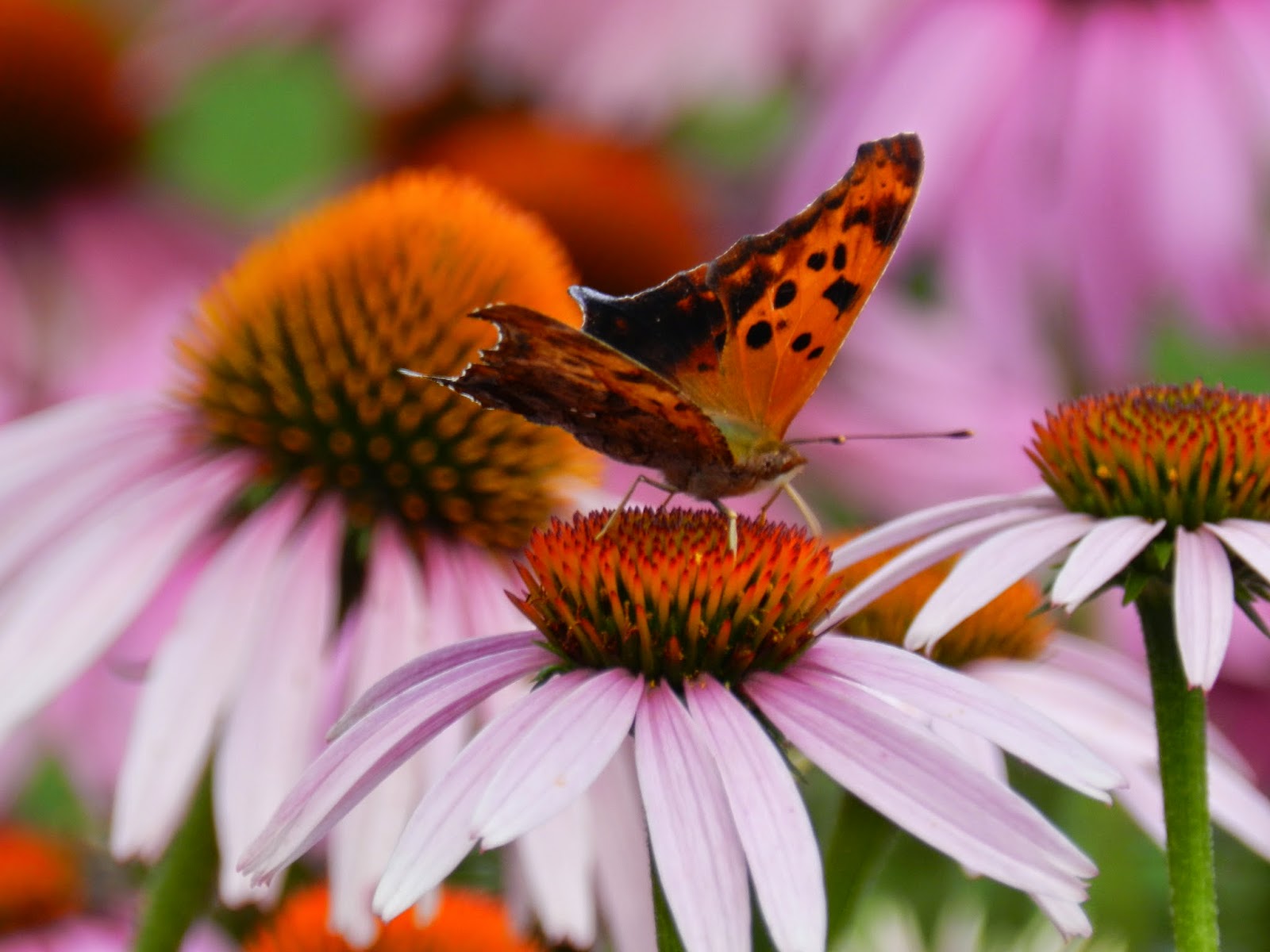 I intend to thin them out eventually, but as long as others are enjoying them, I'm leaving them right where they are!


Garden Bloggers' Bloom Day is held the 15th of every month and is hosted by the always-entertaining Carol of May Dreams Gardens.  See what is blooming across the world this month and come join us!
Posted by Rose at 5:00 AM