Lessons Learned From the Vegetable Garden

I'd like to paraphrase Aristotle just a little:  "The more I learn about gardening, the more I realize how much more I have to learn." I've often said that I still consider myself somewhat of a newbie gardener. Just when I'm feeling rather smug that I have acquired enough knowledge to call myself a true gardener, I learn some new things that make me realize how little I really know.  In thinking about lessons learned this past season, the most memorable lessons came from my vegetable garden.  That's rather ironic considering I have been growing vegetables far longer than growing flowers or other ornamentals.  It just goes to show that learning never stops.


Lesson 1:  Newspapers and straw make an excellent mulch.  My vegetable garden isn't very big--somewhere between 120-150 square feet--but it's big enough to produce enough for us, and it's as much as I can handle.  This is probably the only time you'll see a photo of it, because usually by mid-summer it's a weedy mess.  (Yes, I know, you can spot some weedy grass in the foreground, but let's just ignore that for now, shall we?)  I vowed--once again--not to let it get out of control this year and put down a layer of newspapers between all the rows, and then covered that with straw.  Most years I put down straw around the tomatoes, but this was the first time I used both coverings in the whole garden.  Weedy grasses are my nemesis here, and they still managed to find a place to grow in the rows of vegetables.  But I would pull them out as I harvested beans or greens, and I was pleased that they didn't pop up between the rows as usual.  Both the straw and newspapers eventually decompose and add more nutrients to the soil, an added benefit.  Using this type of mulch is certainly not a new idea, but I finally learned my lesson that taking the time to put down mulch immediately after weeding is well worth the effort in the long run. 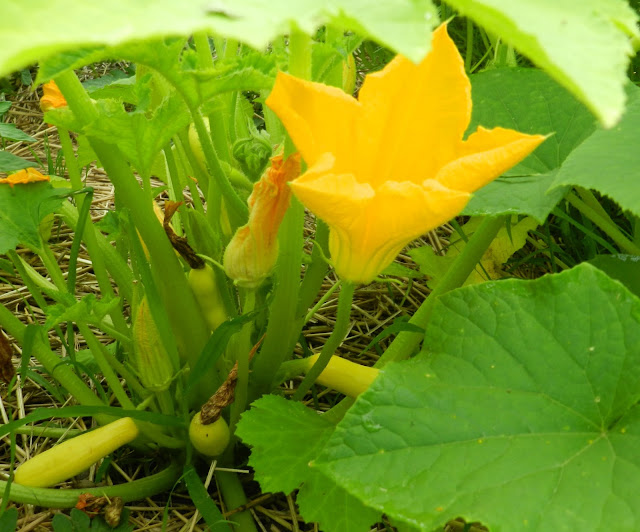 Lesson 2:  Squash bugs have won the battle in my garden.  See this pretty blossom and baby yellow squash?  This was early July; fast forward two weeks, and this pretty picture had turned into wilting leaves and shriveled fruit, telltale signs of a squash bug invasion.  Sure enough, those nasty little creatures were swarming all over the leaves; I sprayed them off with a diluted soap mixture, but the damage had been done.

Years ago, I would have sprayed these plants with Carbaryl at the first sign of these pests, but since I've gone pesticide-free, that isn't an option anymore.  I've tried several organic methods of pest control, though admittedly not very diligently, but nothing has worked.  I've learned that some adults can overwinter in the garden; because of this, it's a good idea to rotate placement of cucurbits from year to year or even to avoid planting them the following year.  So, I'm waving the white flag in surrender--no squash in my garden next year!  These little pests will have to find a new place for dinner . . . I just hope it's not in my friend's garden. You see, if a friend has a successful harvest, you don't have to worry--she will be more than happy to share all those extra zucchinis and summer squash with you:)


Lesson 3:  Pay attention to spacing recommendations and heights given on seed packets. Hmm, this seems to be a recurring theme with me . . .  whether I have 100 square feet or 1000 to plant in, I always seem to want to pack in more plants than I should.  Aside from the green beans which sprawled over the gap between rows or the cucumbers that sprawled everywhere, the specific problem I'm referring to here were the marigolds.  I usually plant a row or two of marigolds at the front of the vegetable garden, partly as a pest deterrent, but also for ornamental purposes.    But this spring I did a little research in companion planting and decided to plant the marigolds in the middle of the plot, nearer the squashes and other plants they were supposed to protect.


Obviously, they didn't discourage the squash bugs one bit.  But they also grew so tall and spread in width that my few pepper plants were lost beneath them!  I reluctantly pulled a few of the marigolds to give the peppers some sunlight, but it may have been too late.  Only one of three pepper plants has gotten big enough to produce some fruit.  Next year the marigolds are going back to being a front border.


Lesson 4: Don't be afraid to try something new.  With a small garden, I don't have room for everything and have to make choices about what to plant.  Fresh tomatoes are the whole reason for vegetable gardening, in my husband's opinion, and they take up a lot of room. By the time I plant green beans--another family favorite--spinach, leaf lettuces, carrots, cucumbers for my son, and the aforementioned doomed squashes, there isn't a lot of space left.  For the past few years I had some flowering kale that came back each year, but I removed it this year to make room for the tomatoes that had to be rotated to the south side.  Instead of that ornamental kale, I decided to plant swiss chard and a smaller kale, 'Dwarf Blue Curled.'

My daughter was on a juicing kick earlier this spring and brought home bunches of kale to put into her smoothies. Why not grow this new "super food" myself, I thought?  Well, both the chard and kale plantings were a success, but I must be honest that I've only admired the chard for its pretty looks and haven't actually tried to eat it.  As for the kale, I did make some kale chips, which my older daughter recommended, but I don't think I'll recommend my recipe . . .  I did put some in the freezer and plan to freeze some more before the end of the season.  Winter sounds like a good time to try some of the many recipes for kale I added to
my Pinterest board over the summer:)   The juicer, by the way, is collecting dust at the bottom of my pantry.


Lesson 5:  Nature can be cruel. Every year I make sure to leave a little space in the vegetable garden for the butterflies.  Dill and fennel are host plants for the swallowtails, and my grandkids enjoy finding the caterpillars crawling on them in late summer.  Earlier this summer, I was delighted to find many tiny black creatures--the first instar larvae--on the dill one day.  When I thought to check them again a few days later, though, they were all gone.  What had happened to them??  It wasn't until I read someone's blog about raising caterpillars, too, that I realized all these little catts had probably become dinner for the birds.  I like birds, too, of course, and they're welcome to most of the insects they can find here, but not the swallowtail catts!  It made me sad, especially since we've had so few butterflies this year, but unfortunately, that is all part of the cycle of nature. Perhaps next year I'll put some netting over the dill and fennel to protect these delicate little creatures.

One lesson that I learn every year from the vegetable garden, more so than any other place, is that gardening is unpredictable.  One year I have an explosion of zucchini, and the next year the fruit shrivels on the vine.  One year the tomatoes get blight, and the next--like this one--I have so many that I'm making tomato juice and sauce for the freezer twice a week just to keep up with all the tomatoes!  The vegetable garden reminds me each year that some things are out of my control, and that nature has the ultimate upper hand. I've learned to roll with the punches and shrug off one year's disasters--after all, there's always a clean slate to start with next spring. 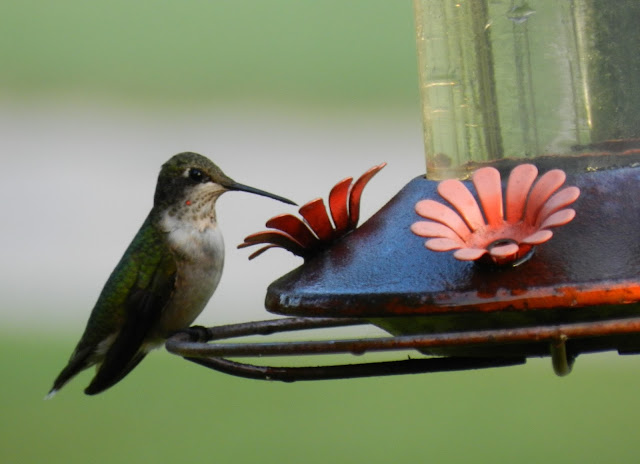 Finally, I can't resist one last lesson that has nothing to do with vegetable gardening whatsoever.  Though the butterflies have been missing this year, there has been a flurry of hummingbird activity here.  For years I purchased hummingbird nectar mix at a local big box store, thinking the red nectar added some extra attraction for the birds.  But mid-summer I started making my own nectar--1 part sugar to 4 parts water--and the hummers love it!  No more red dye for my sweet little visitors!  I'm glad they're getting fueled up for the long flight south they will soon make.

Thanks as always to Beth of Plant Postings for hosting this quarterly meme on Lessons Learned in the Garden. It's always helpful to reflect on the past season's successes and failures, not only to keep from making the same mistakes again, but also to appreciate and take satisfaction in all that went well in the garden.
Posted by Rose at 8:24 PM