Fall is just around the corner, but you would never know it this week--it's been hot, hot, hot!  Temperatures have soared into the 90's with a heat index of 104 forecast for today.  I hope this is summer's last hurrah; cooler temps and some rain--please!--would be so welcome. 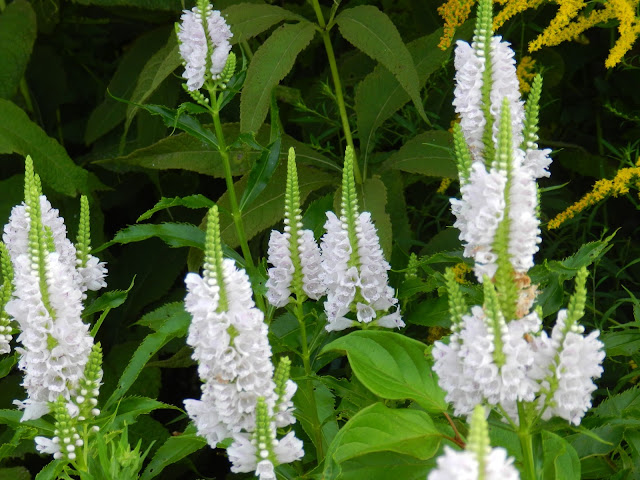 The garden, though, is beginning to shift into fall mode regardless of the heat.  Obedient Plant has burst into bloom in the butterfly garden just in time for Wildflower Wednesday.  I've cautioned every time I've shown a photo of Obedient Plant, Phystostegia virginiana, that it is an aggressive spreader and may not be suitable for everyone's garden.  This spring I was determined not to let it take over this area, so I ruthlessly pulled out seedling after seedling, leaving only a few.  Unfortunately, no pink bloomers returned, only white ones--darn, I wish they'd come with color tags! 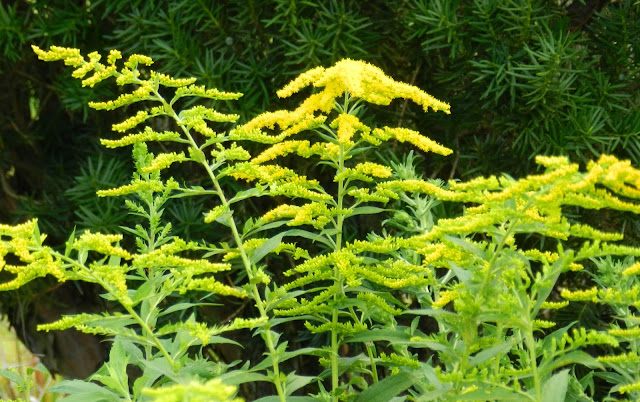 It looks like I'm also going to have a bumper crop of goldenrod this fall.  No fancy-schmansy hybrids here, just the ordinary goldenrod that grows wild anywhere it can.  Many would call it a weed, but I like its bright appearance, and the bees and other critters like it even without a pedigree.  Besides, it makes a nice contrast to all the asters that will be blooming in this area soon. 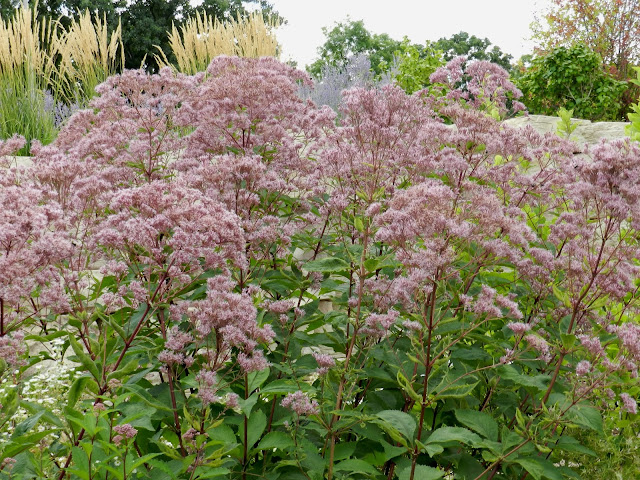 But what I really wanted to feature for this month's WW post is a plant that everyone seems to have been bragging about this year--Joe Pye Weed, once in the Eupatorium genus, now Eutrochium purpureum. But let's just forget about those fancy Latin names that taxonomists seem to want to change every few years--I prefer to call him by his common name "Joe."


Joe Pye Weed is a native to much of the Eastern and Northern US; growing to 5-7 feet tall, it's a perfect accent at the back of a border.  Its fluffy pinkish-purple blooms won't shade out shorter plants in front.  It blooms in mid-summer to early fall. 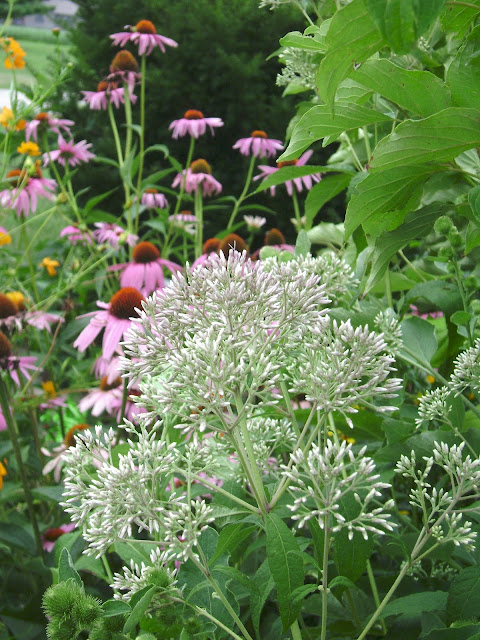 My Joes are planted in full sun, but they also do well in part shade.  One thing Joe likes, though, is moist soil, which is probably the reason mine is doing so much better this year than in the past.  I don't give the butterfly garden much additional water, so the plentiful rain--until this month!--has made him very happy. 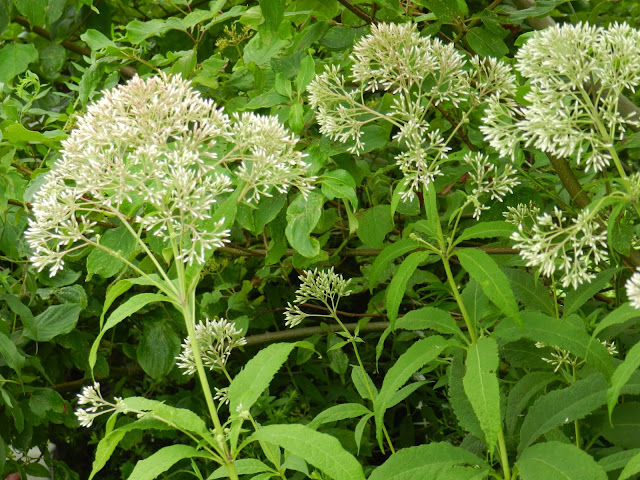 Until this year I had only one Joe-Pye Weed, and I was always rather disappointed in its appearance.  The blooms were a lighter pink than others I saw, and the stems were green, not the purple I associated with most Joes.  However, I have since learned that there are several types of this plant, and mine might be a Hollow-stemmed Joe Pye. 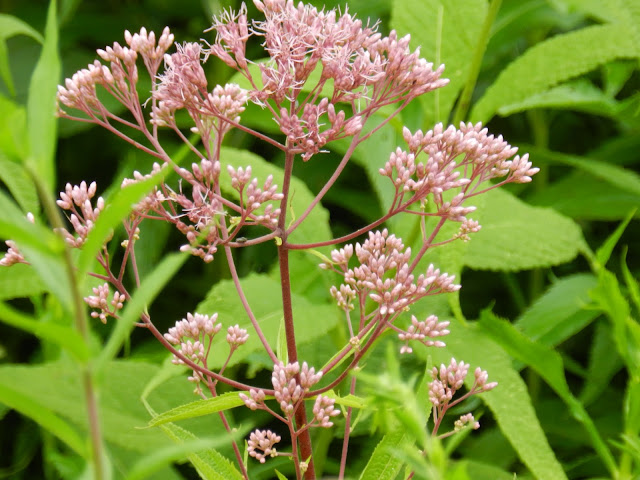 This spring I added another Joe Pye, purchased from the annual sale of our local Prairie Plant Society, as well as a 'Little Joe,' purchased from a local gardener and fellow native enthusiast.  I was happy to see that these Joes have the purple stems and darker blooms I was hoping for.  The new Joe is much shorter than my original, and 'Little Joe's' blooms were rather small this year, but I'm sure they will both grow with time. 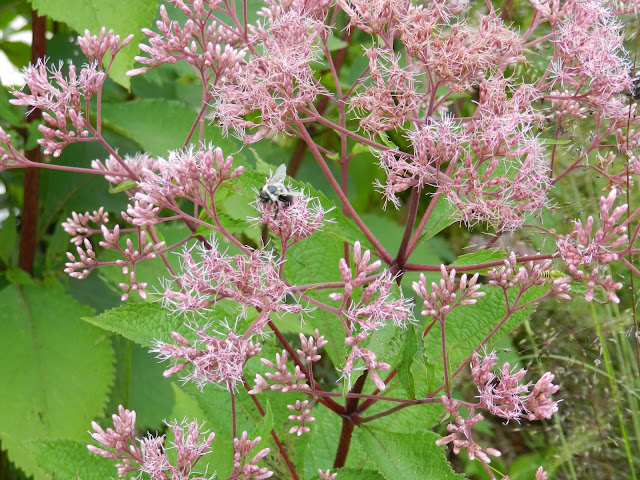 Joe attracts a multitude of bees and butterflies.  Alas, our shortage of butterflies this years means I have no photos to prove the latter, but I can certainly prove the bee attraction.  This stand at the Nicholas Conservatory in Rockford, which I recently visited, was just swarming with bumblebees. 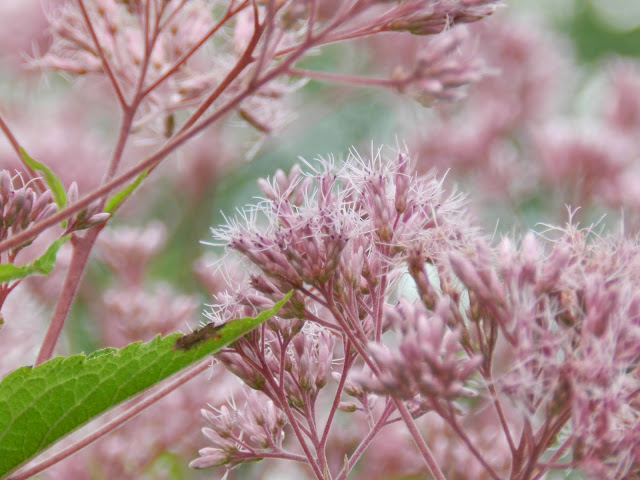 The origin of this plant's name is rather a mystery.  According to some sources, it was named after an early doctor or herbalist, possibly a Native American, possibly a colonist, who cured fevers with a concoction made from this plant. Whether that is fact or fiction, one thing is true about Joe Pye Weed--it is certainly not a weed!

Wildflower Wednesday is hosted the fourth Wednesday of every month by native enthusiast and protector of the bees, Gail at Clay and Limestone.  Why not join us?  You're sure to learn something new!