...or at least I hope so.  Spring has finally arrived, I think, and the garden is slowly waking up.  But spring rains have also arrived, making it difficult to get much work done in the garden.  Rose's Law has definitely been in effect:  "Warm, sunny days occur only when the gardener is out of town or busy with other commitments."  I keep reminding myself, however, of the drought the past two summers and to be thankful for all this rain, even if it means the daffodils are fighting for attention with last year's dead perennial stalks. 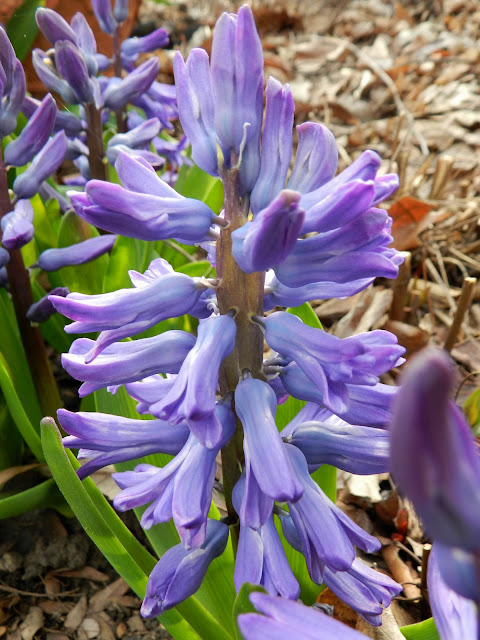 Besides cutting back last year's perennials, there are lots of thick oak leaves to be raked from the garden.  These hyacinth were so happy I finally raked off the leaves that were smothering them--they went from a sickly yellow to full bloom in just a matter of days. 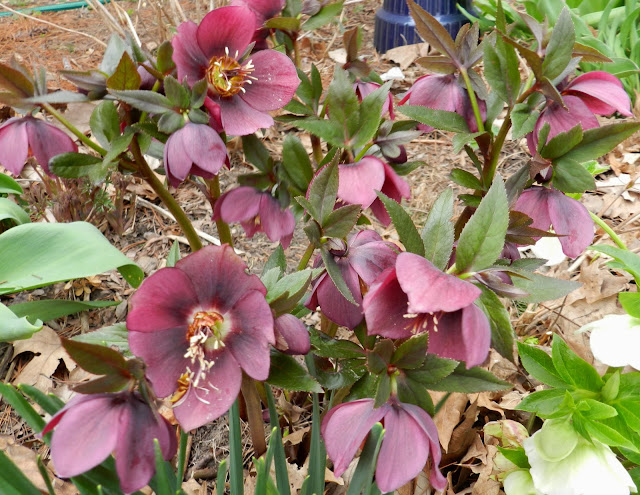 I've also cleaned up most of the shade garden, including cutting back the old foliage of the hellebores, giving them a chance to shine. 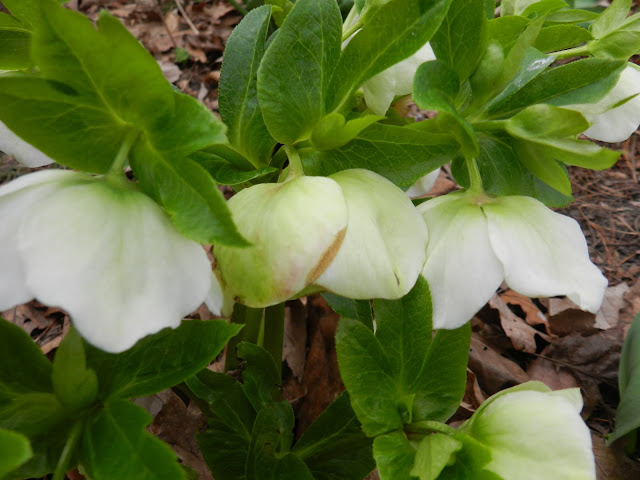 The white ones are the same type of hellebore, but only fairies or other creatures scampering below them can fully appreciate their blooms.  Notice more oak leaves underneath--they're great as winter insulation, but they sure are a pain to remove in the spring. 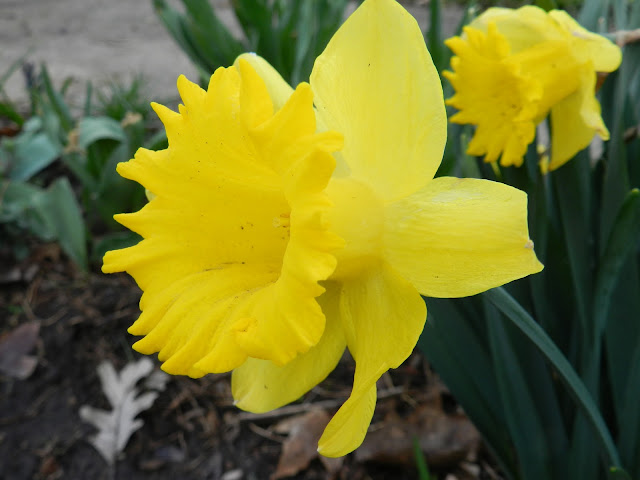 I was out of town last week, visiting my daughter in Dallas. When I left, the daffodils were still buds; when I returned, they were fully opened to give me a very cheery welcome home. 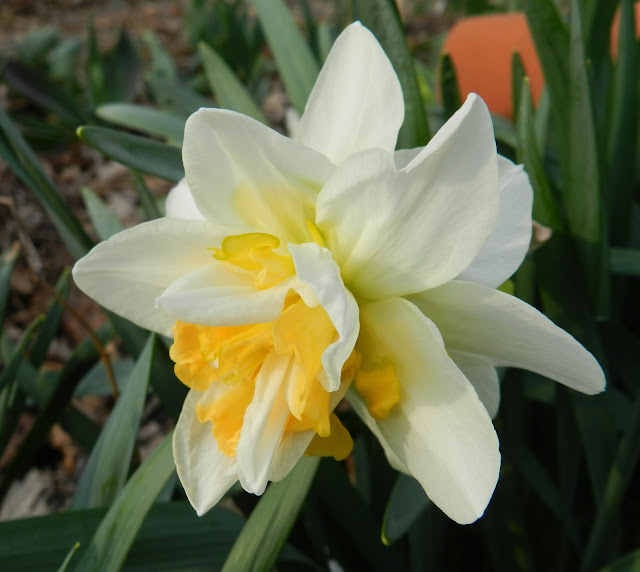 The traditional yellow daffs are always the first to open, but this year the double 'Repletes' have also made an early appearance.  Until a few years ago, I thought that all daffodils were yellow, but a mail-order offer opened my eyes to the wide variety of daffodils available today.  I immediately fell in love with the pictures of double ruffled daffs and ordered several varieties, including some with pink centers.  However, I must say they haven't quite lived up to those glossy images.  Blowing in the wind--which never seems to stop these days--they tend to look rather bedraggled. 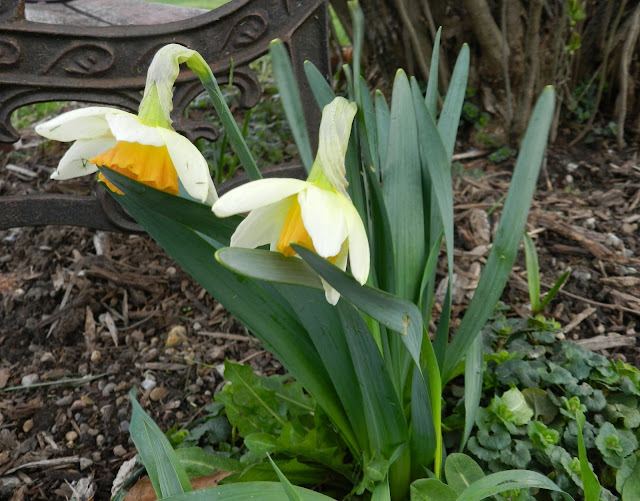 Instead of doubles, the last few years I've been planting different varieties of single bloomers, which I much prefer.  These white with orange centers are in Odie's memorial; there are more varieties in "Daffodil Hill," but their photos will have to wait until a day when the wind finally stops blowing. 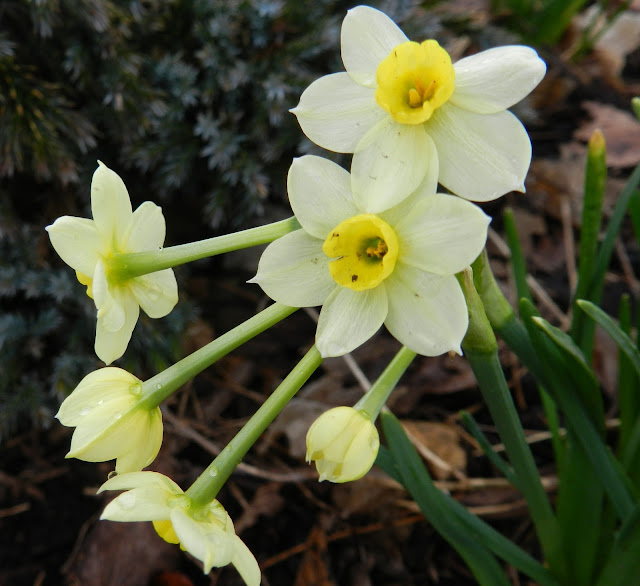 I've also begun to plant more diminutive varieties, such as these 'Tazetta' narcissus (I think) in the arbor bed.  They don't show up from a distance like the taller daffs, but their dainty size adds some dimension to the garden. 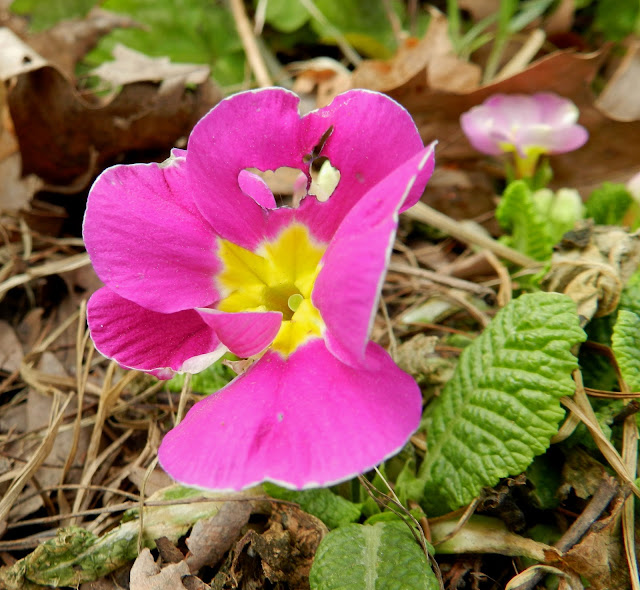 Another rescue from the oak leaf blanket--the first primrose is blooming.  I'm not sure what caused the hole in the petal--an over-vigorous raking or some creature hiding beneath the leaves.  Another reason to finish the clean-up as soon as possible: if I don't get these leaves removed before the hostas come up, the slug population may explode this summer. 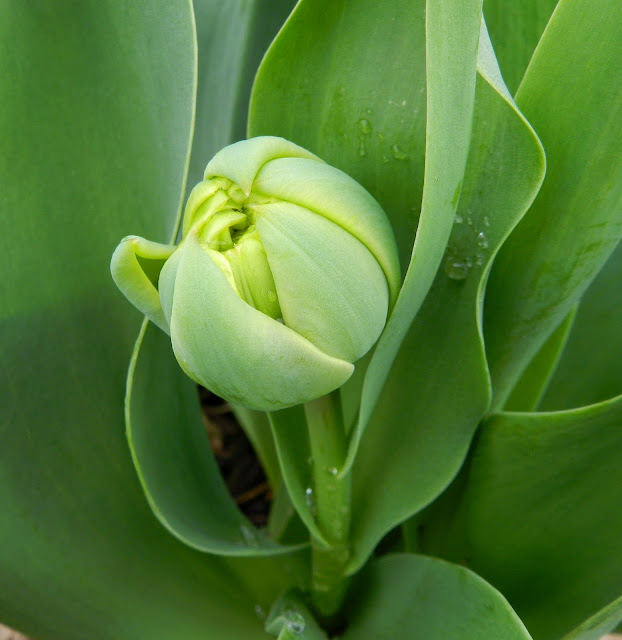 A few scilla have also begun to bloom, and the trees and shrubs are budding up, but the biggest spring show is yet to come--this fat tulip bud holds the promise of a colorful spring very soon.

Today's blooms are brought to you courtesy of our hostess with the mostest, Carol of May Dreams Gardens.  It's interesting that when I was checking last year's posts for a plant i.d., I discovered I had almost the same photos last year--except they were for March's Bloom Day, not April's.  I hope that is a good sign that this will be a more "typical" year, weather-wise, and that all these spring rains will make for a much better summer garden.