GBBD: Survival of the Fittest

On this July Garden Bloggers' Bloom Day, I am praying for rain.  A break in the heat would be nice, too, although we've cooled down a bit from last week's unbearable temperatures to more "typical" highs in the 90's (32 C).  But I'll put up with the heat if only some rain would fall.  Our area is now classified as being in a severe drought; by contrast, northern Illinois is only in a moderate drought.  However, the southern part of the state and parts of Indiana (Carol and Lisa, I'm praying for rain for you, too) is under an extreme drought and approaching the worst level, exceptional drought.  Isolated thunderstorms are in the forecast for today--translation: I'll be lucky if we get a few sprinkles.  According to meteorologists, though, a brief shower may bring temporary relief, but what is needed are several concurrent days of steady rainfall.

The garden has gone into survival mode.  The stressful conditions are showing what's tough, and what isn't.  If nothing else, this awful summer is giving a lesson on planting a low-maintenance garden--plants that don't require constant coddling to keep them alive. 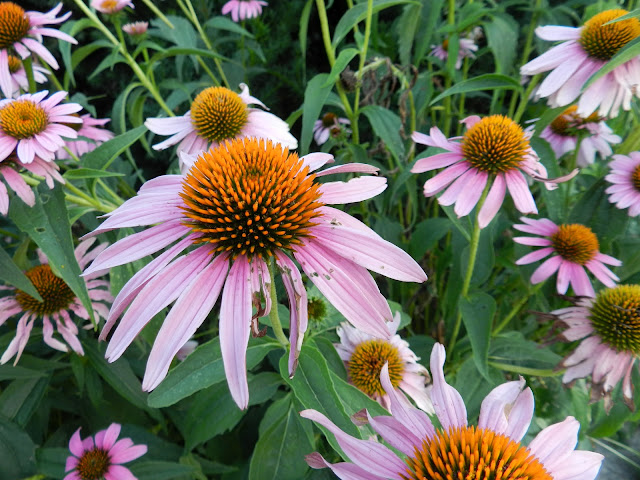 At the top of this Darwinian survival scale are the natives, of course.  The purple coneflowers, Echinacea purpurea, are looking a bit ratty, and some even are wilting. 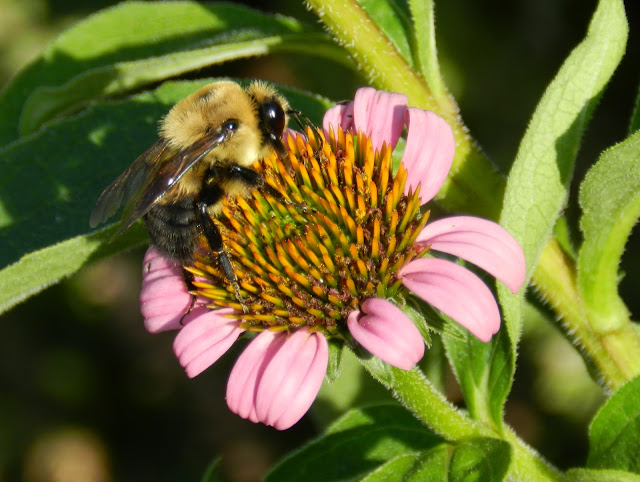 But another native, the bumblebees, don't seem to mind their appearance. 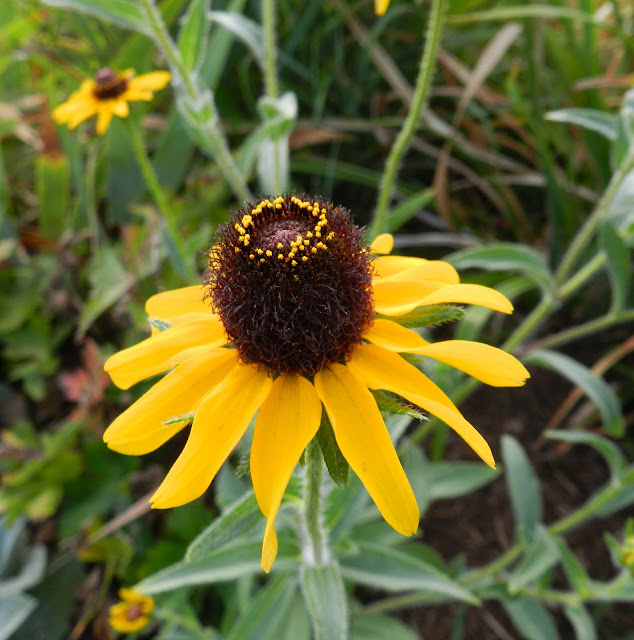 Rudbeckias are also unfazed by the lack of rain and have even bloomed earlier than usual.  This is a volunteer in the lily garden, and I have no idea what type it is--it's taller with a more pronounced central cone than the other Rudbeckias growing in the butterfly garden.  Other natives in bloom include the asters, which are blooming way ahead of schedule, and Joe Pye Weed, which is just opening up. 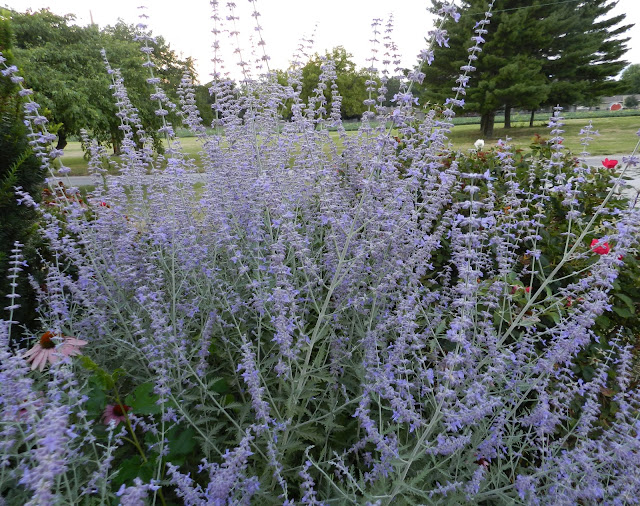 There are other tough plants besides the natives, of course.  Russian Sage looked terrible after the April freeze, but has come back from its injuries to full strength.  I'm not sure I could kill this plant, if I tried:) 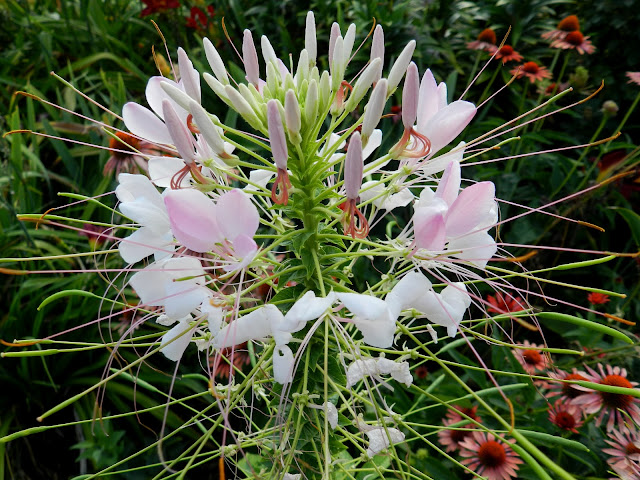 I can always count on Cleome, too, to come back every year in unexpected places, usually somewhere where it will block the view of shorter plants behind it. 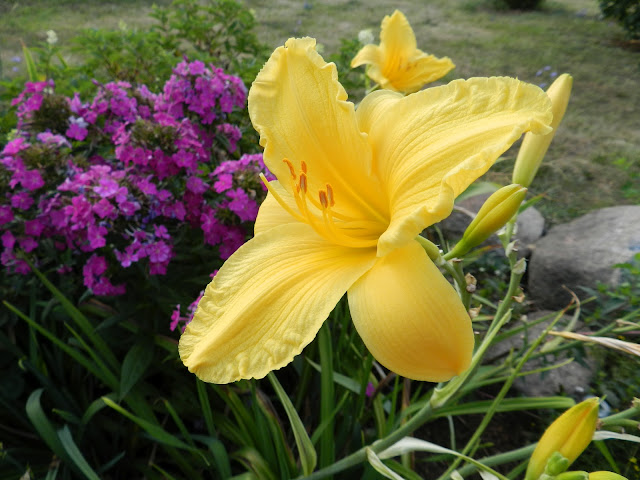 Daylilies have also surprised me with their resiliency, though some of the foliage has yellowed already.  This NOID Hemeorcallis--in front of a NOID phlox--is also a DIPT (Did I Plant This??). Another NOID is no longer blooming, but at least it's no longer a DIPT--friend Beckie reminded me when she saw it that she had given me a few different lily divisions, including this one.  It's one thing to forget from year to year what I planted, but forgetting something planted just two months ago is a bit worrisome. 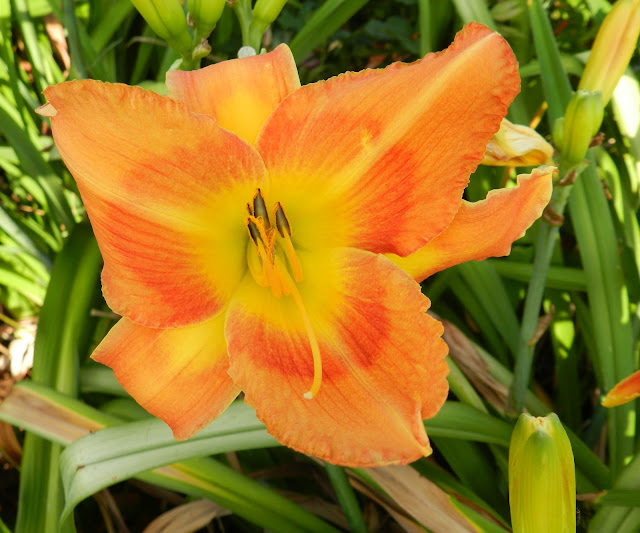 No forgetting this one--'Dragonfly Corner,' another division from Beckie, has produced numerous blooms. 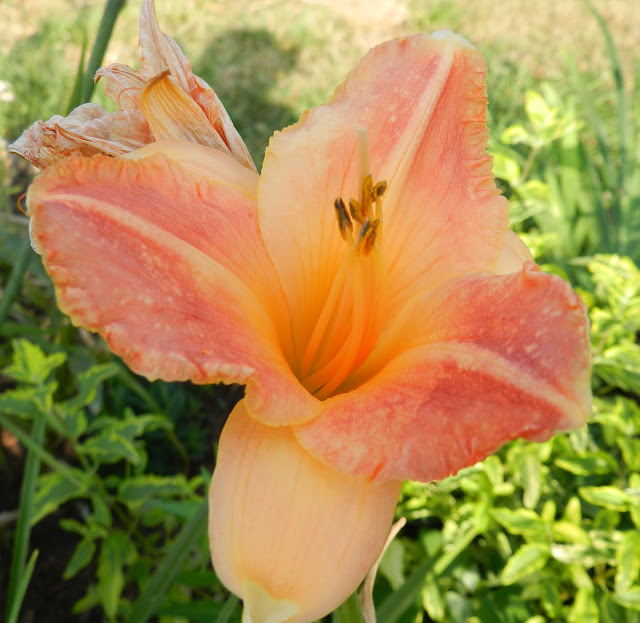 Planted the same year, 'Prairie Sunrise' hasn't been as prolific this year, though it's still one of my favorite colors. 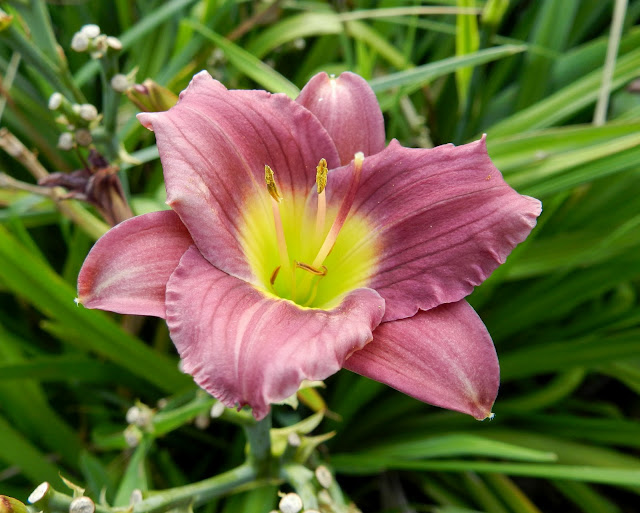 'Little Grapette' is nearing the end of its bloom time, but has produced numerous blooms for nearly a month. For once, I planned well--this lily is in the front of the lily bed, perfect for its shorter stature. 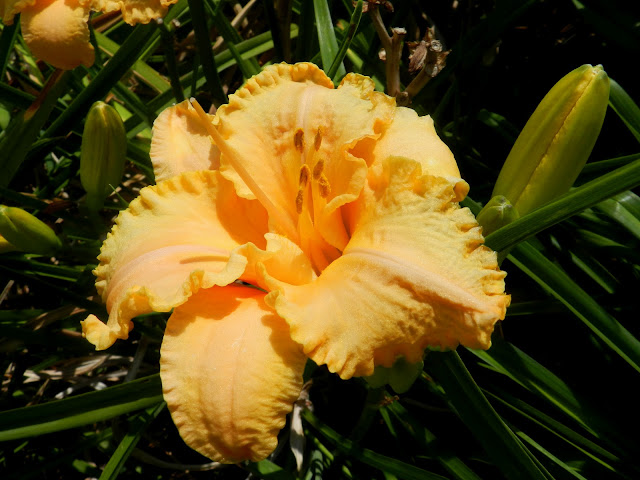 'Tangerine Orange Ruffle' is another favorite.  This bloom was actually from last week, but I thought it deserved a little recognition, too. 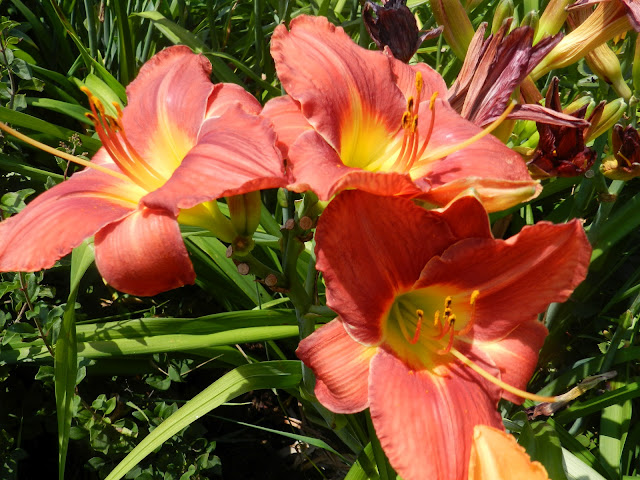 'Nettie's Rubies,' named after my aunt who gave them to me, have done well as always.  They're much darker than this full-sun photo shows, however. 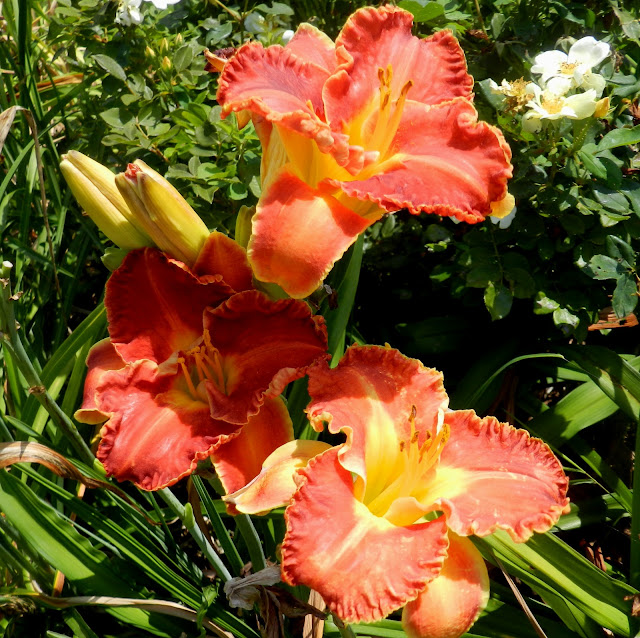 'Romeo Lies Bleeding' has also done well this year, adding several inches in height, perhaps to catch up to his companion . . . 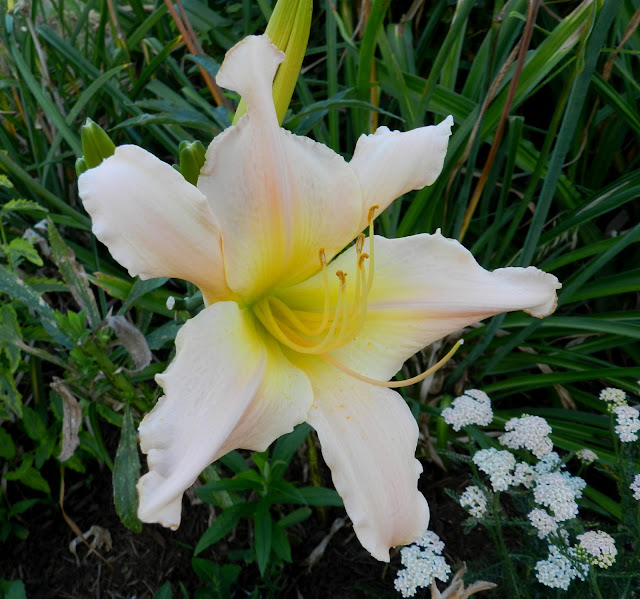 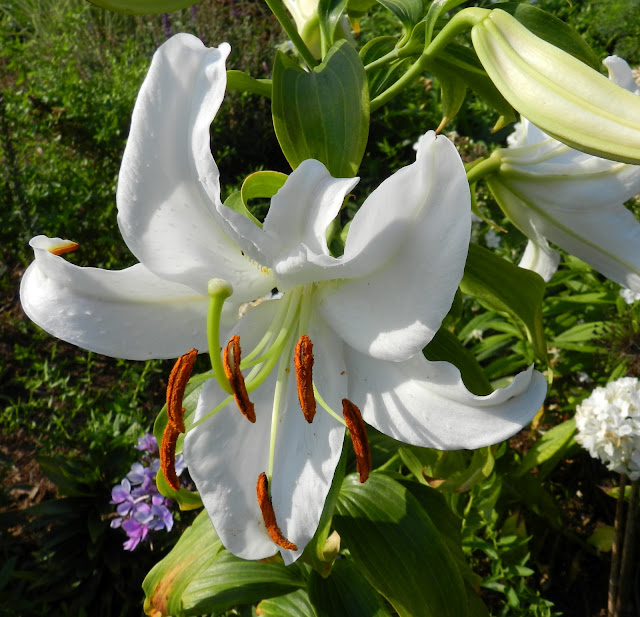 While some daylilies have already finished blooming, the Orientals are just beginning.  The 'Stargazer' has several blooms, but I'm most happy about this 'Casablanca.'  You can't see the brown foliage below it, but it was hit especially hard by the late freeze, and I didn't expect it to bloom at all this year. 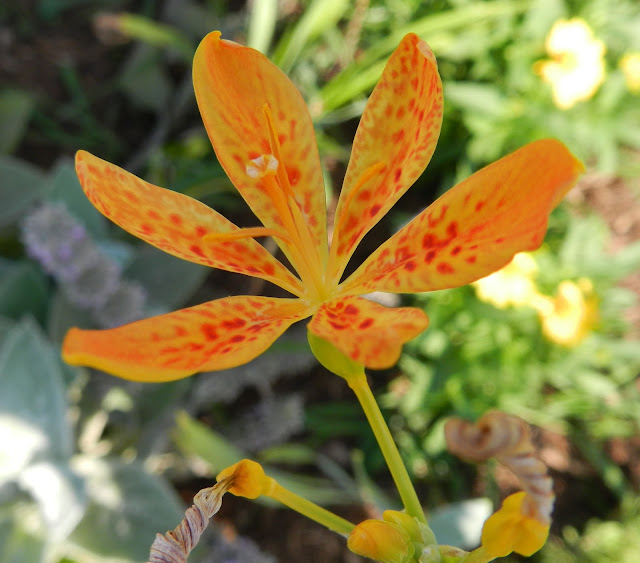 Finally, another lily that I'm so excited about--my very first Blackberry Lily, Belamcanda Chinensis! Its blooms may be tiny compared to the other showier lilies, but considering I have tried unsuccessfully for several years to grow these from seed, I am thrilled that a couple have finally made an appearance this year. 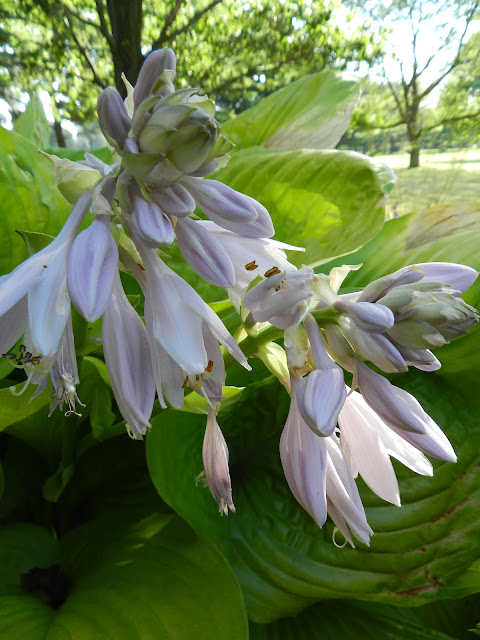 The shade garden, which normally is pretty low-maintenance, has required constant watering this season.  Even though many of the hostas are blooming right now, like my 'Sum and Substance,' some of them have yellowed leaves, despite the frequent waterings. 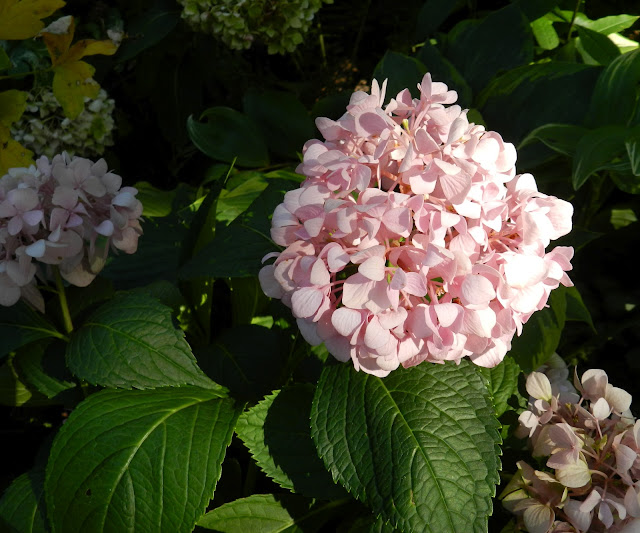 Definitely not in the category of tough survivors, the Hydrangea macrophyllas like 'Let's Dance in the Moonlight' above and the 'Endless Summers' have been covered in blooms, only because I have been careful to water them at the first sign of wilting leaves. 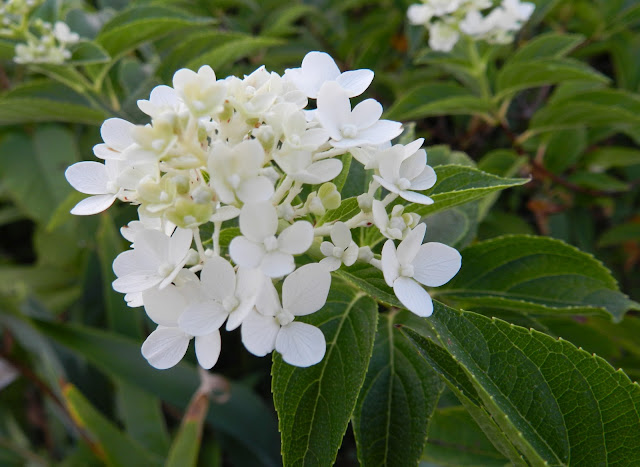 The paniculatas, I've decided, however, are a much stronger species and can tough it out through hard times. I noticed today the first blooms beginning on the 'Limelight' and the younger 'Vanilla Strawberry' (above). 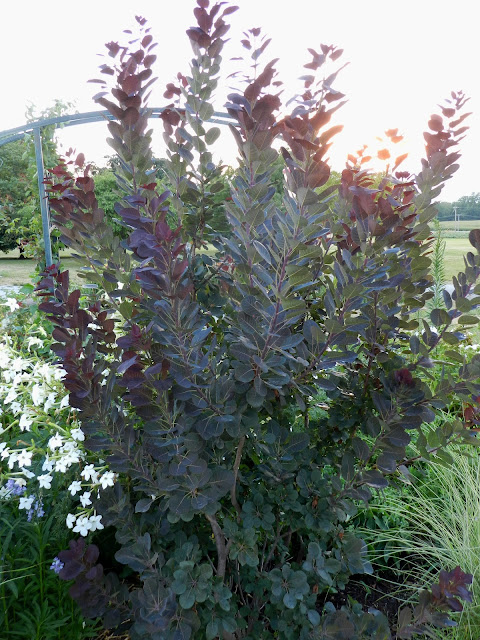 Although I spend a lot of time watering containers and annuals every summer, this year I've really had to watch perennials and some of the newer shrubs as well.  A few shrubs, like the viburnum and the fothergilla, went from looking fine one day to crispy leaves the next, it seemed.  I can only hope that I caught them in time and that they will recover.  One shrub, though, that has shown it's a survivor is this Purple Smokebush.  It had just started to bloom in April when the freeze hit, and it looked absolutely pathetic for about a month.  As you can see, though, it has recovered fully; I think it has even doubled in size since last year.  This is definitely a keeper! 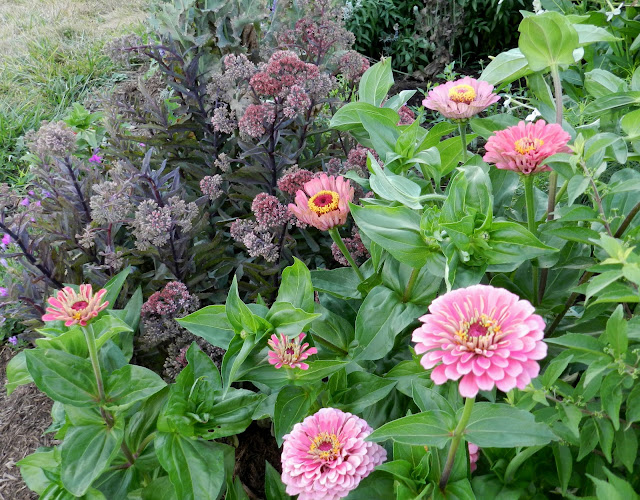 Over the last few months I've lost more annuals than I care to count, and some of my containers look pretty pitiful already.  But again, there are some annuals that can withstand the heat better than others.  Lantana is one, and zinnias are another.  The zinnias are just beginning to bloom in the arbor bed, where many perennials are beginning to fade. 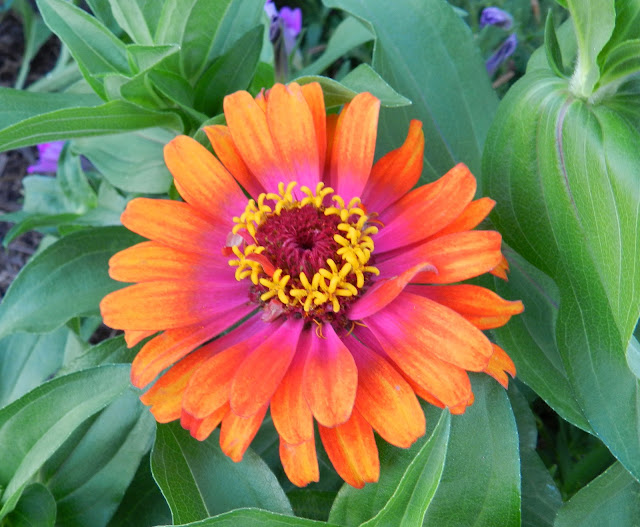 A new zinnia is just beginning to bloom--we grew this 'Zowie! Yellow Flame'  zinnia in the MG Idea Garden last year, and I knew I had to add it to my own garden this year.  I think its hot, hot colors are perfect for this summer.
Despite all my complaining about the weather, there is quite a lot blooming in my garden this July besides what is pictured here.  But it has definitely been a trying summer, and I am thankful for these tough survivors who have soldiered on without a lot of attention from me.  To see what else is blooming all over, be sure to visit our hostess who is also doing a rain dance, Carol of May Dreams Gardens.
UPDATE:  I wrote this yesterday morning but waited to post it till today.  I'm happy to report that yesterday afternoon rain finally fell in our area. Wonderful, glorious rain that the ground greedily soaked up--nearly 2 inches!  I hate to sound greedy, but we sure could use a couple more days of these showers.
Posted by Rose at 5:00 AM