After a few weeks of posts about this year's Fling in Asheville, you might think I haven't spent any time at all in my own garden.  But nothing could be further from the truth. It's been a flurry of early morning activity--before it gets too hot--catching up on weeding, planting, mulching, and watering.  In fact, June is literally "bustin' out all over" with lots of color.

Here are some of the blooms in my garden this Garden Bloggers' Bloom Day: 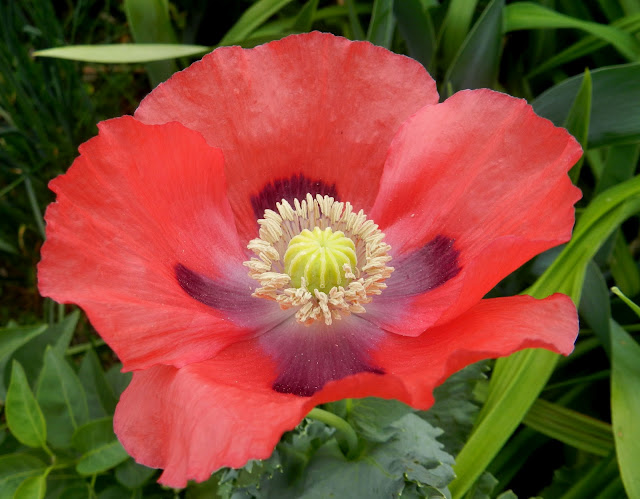 Poppies were everywhere we visited in Asheville, but they're blooming in central Illinois as well. 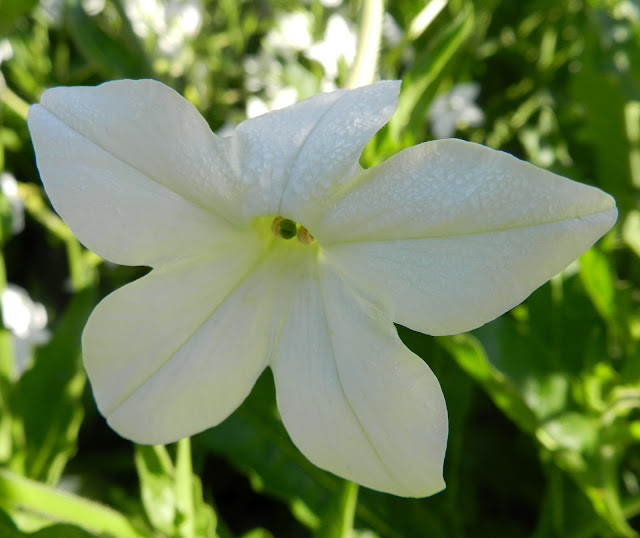 Nicotania has slightly fragrant blooms that open up fully in the early morning and again later in the evening. They're so sweet I can't bear to pull them out. 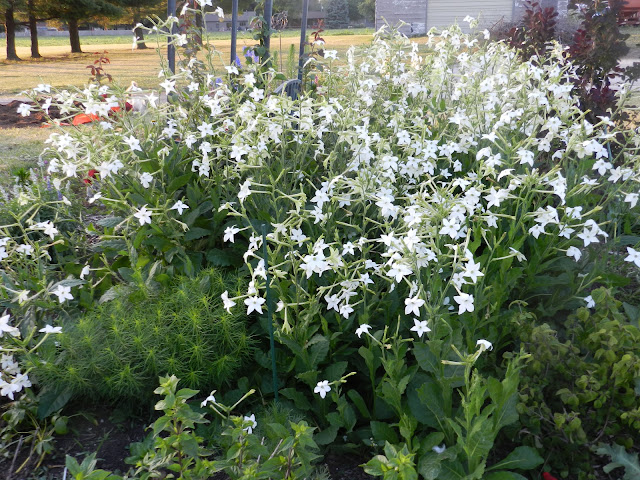 Why should I want to tear them out? Well, as you can see, they have taken over my arbor bed!  Since last year was the first time I had success with them in my garden, I don't know if they normally self-seed so prolifically or if it was due to the mild winter.  I have dug up many seedlings to give away and pulled countless others, but still they keep popping up everywhere. I just don't have the heart to pull up flowers, but I'm giving them another week or two, and then they're definitely going to be thinned out to make room for everything else. 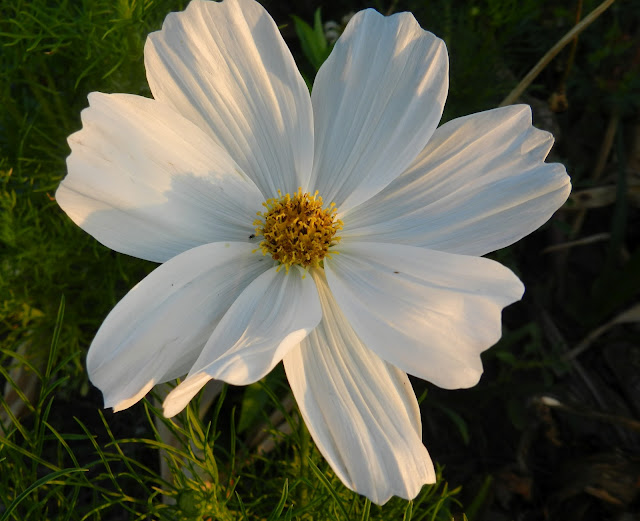 On the other side of the arbor bed, another volunteer--'Sonata' white cosmos.  They have been much more polite than the nicotania, and I wouldn't mind if these spread even more. 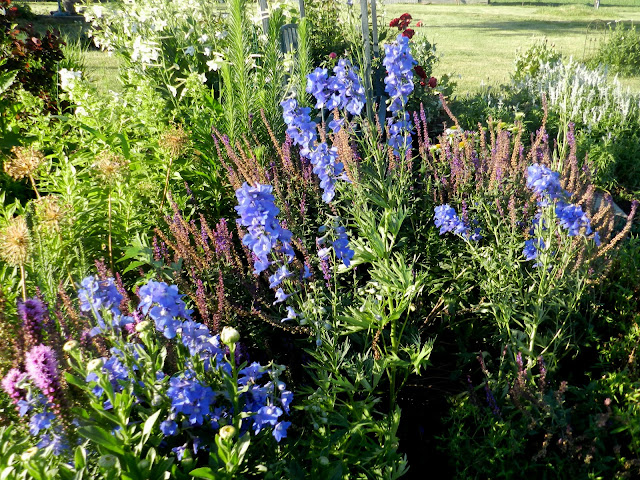 This side of the arbor bed also shows I didn't keep my vow last year to stop planting everything so close together.  Blue delphinium rise above spreading mounds of 'May Night' salvia and emerging liatris. 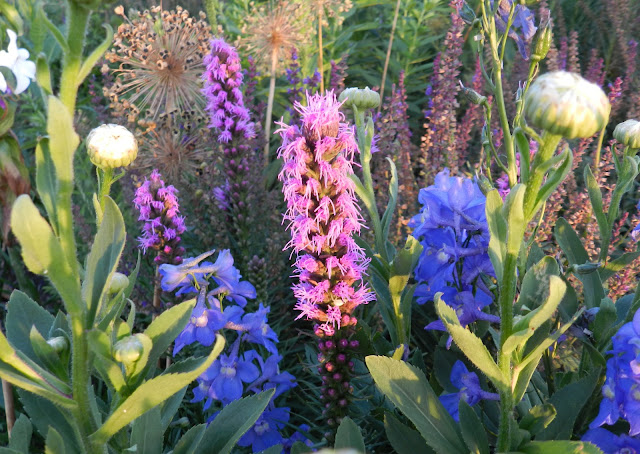 In fact, it wasn't until I downloaded the previous photo that I realized there were a few liatris already blooming--they're almost lost in the crowd. 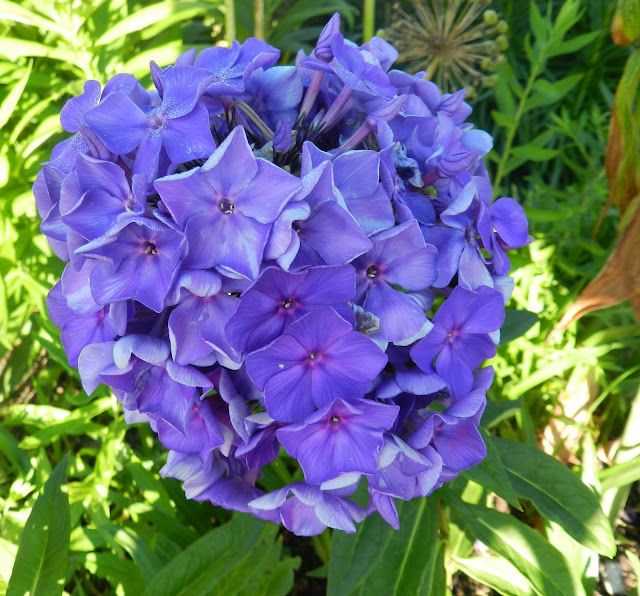 Also nearly hidden and in need of a move is the new phlox planted last fall, 'Blue Paradise.' 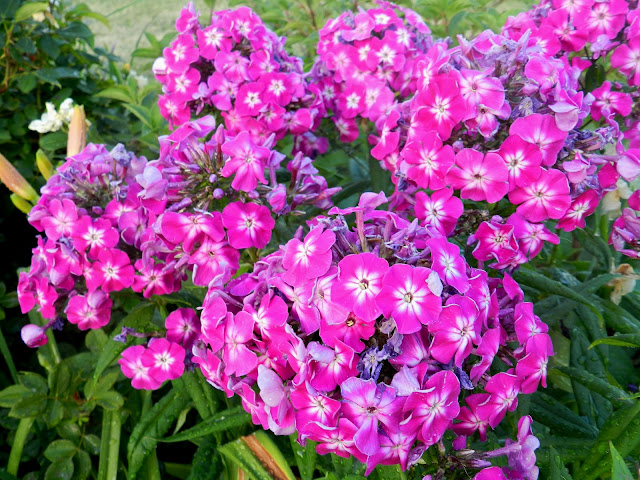 It's hard to believe that until recently I didn't have any phlox in my garden at all, but now I have several including this NOID phlox in the lily bed.  This one almost met its demise last spring, because I didn't even remember planting it and thought it was a weed emerging! 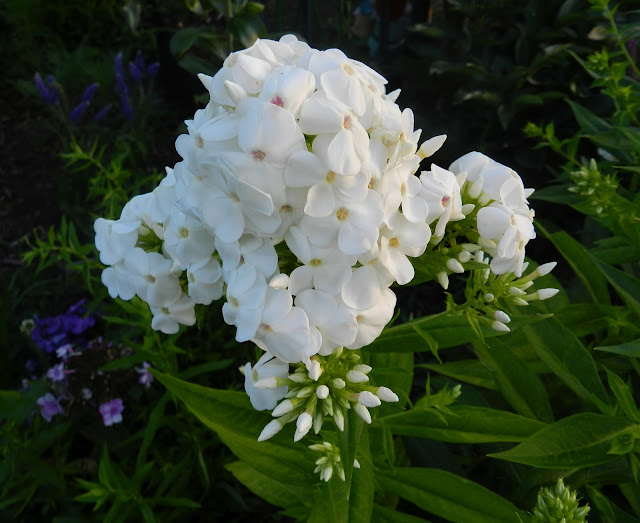 My favorite of all, pristine 'David' is just beginning to bloom. 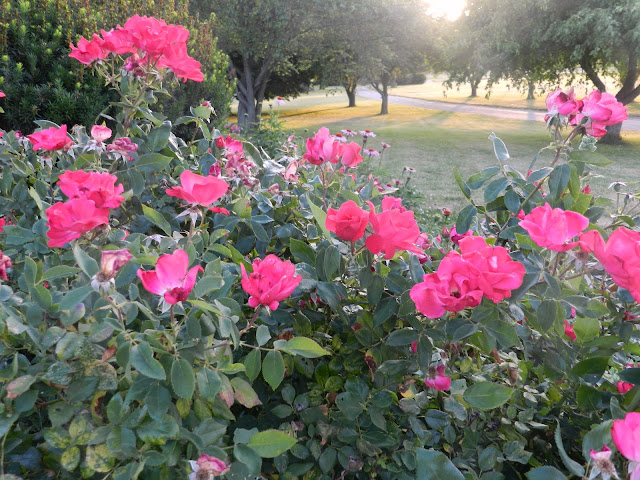 The red Knockout roses are blooming like crazy this year.  I saw the first blasted Japanese beetle on a bloom yesterday, so I will enjoy these while I can. 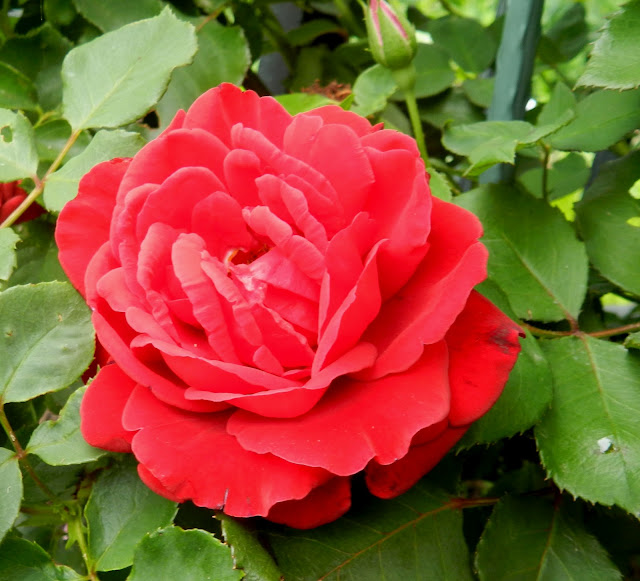 The climbing 'Don Juan' is also blooming profusely in the arbor bed, though it's still not quite tall enough to climb up the arbor bench. 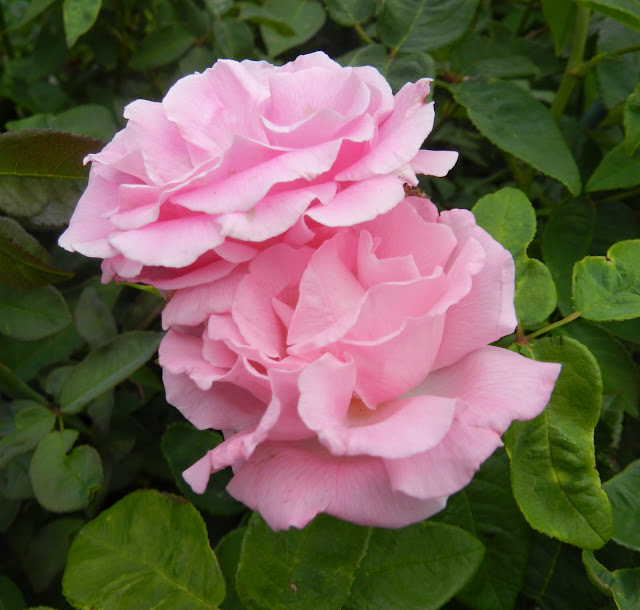 Nearby, what was supposed to be 'Zephirine Drouhin" is, I'm afraid, the surviving root stock instead.  I'm don't know enough about roses to know whether I should pull this out, but again I'm such a patsy for blooms--and it's full of blooms--that I don't have the heart to get rid of it. 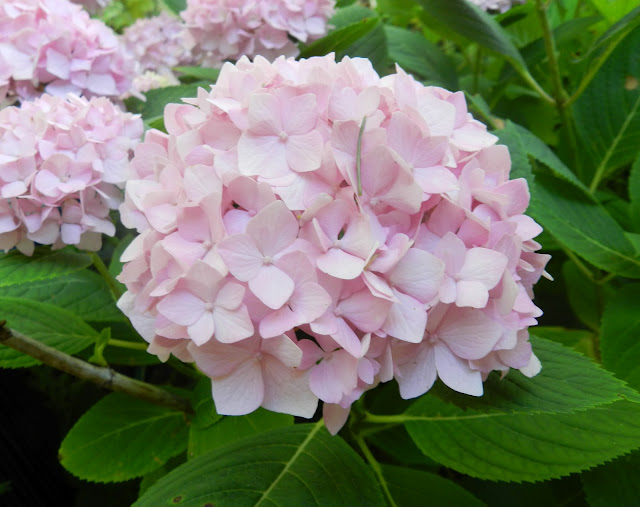 'Endless Summer' hydrangeas are covered in many more blooms than last year.  That is, one of them is--the other 'Endless Summer' was hit by the late freeze in April, but it's starting to catch up. 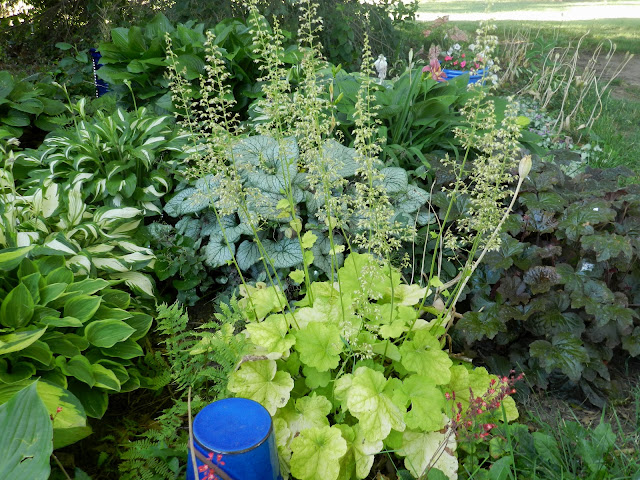 The shade garden is all about foliage, but the airy blooms of Heucheras make an eye-catching display.  This is my favorite, 'Tiramisu.' 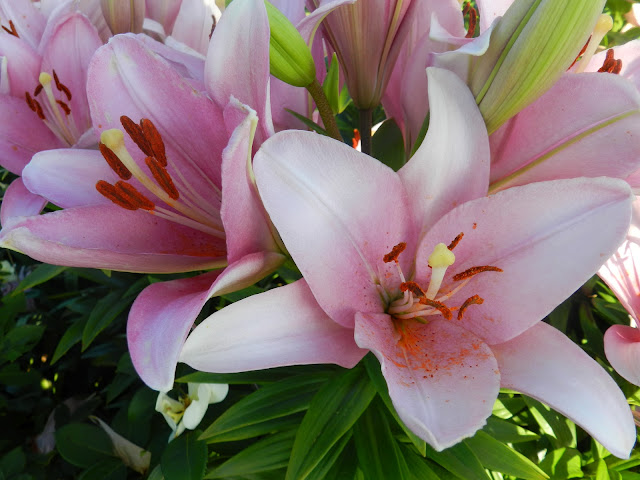 Although everything has bloomed earlier than usual this year, I think the rate of acceleration has slowed down in recent weeks.  The Asiatic lily 'Brindisi' is only slightly ahead of schedule. 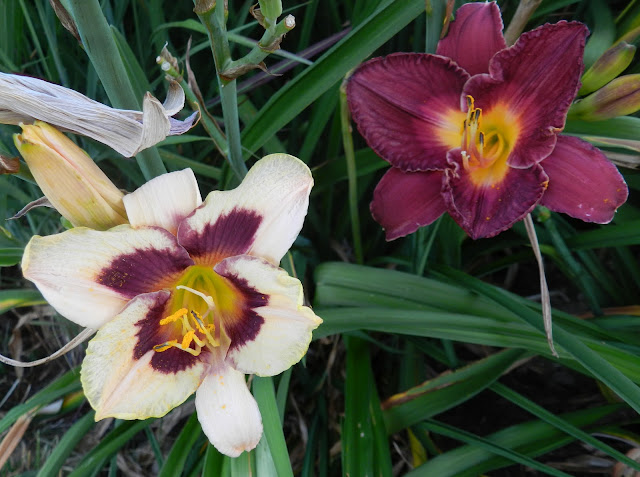 The daylilies are also just beginning to bloom.  After the reliable 'Stellas,'  'Moonlight Masquerade' on the left is always the first to bloom, followed by 'Canterbury Tales' on the right. 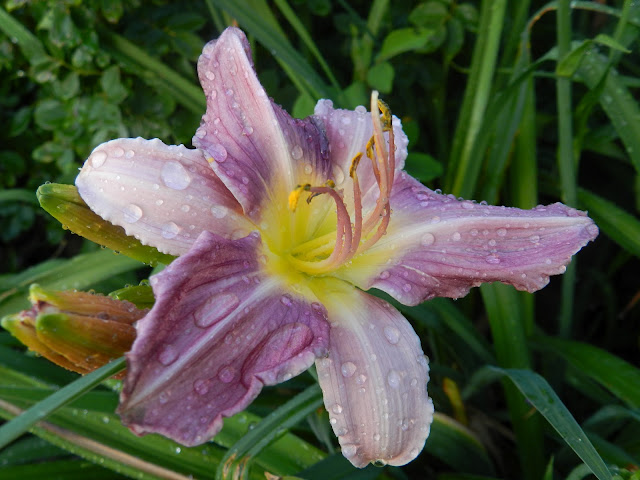 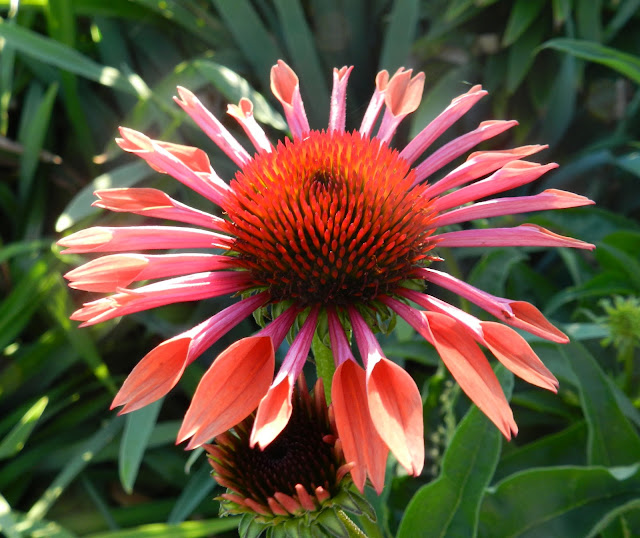 Echinacea 'Big Sky Sundown.' As much as I enjoy seeing all the daylilies come into bloom, June for me means the happiest time of all in the garden . . . 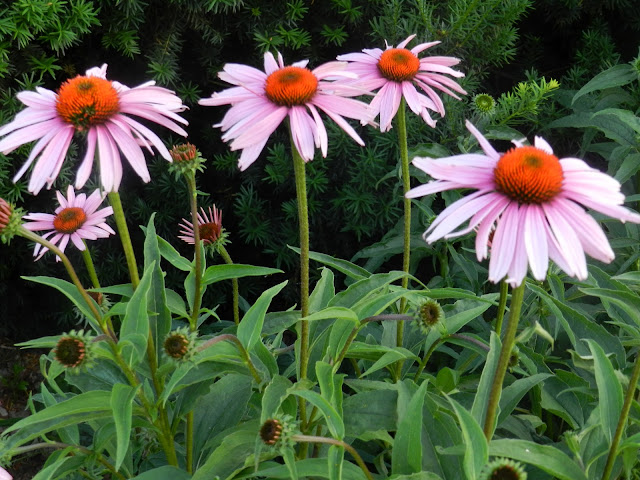 Yes, it's the beginning of coneflower season!
To see what else is blooming all over, be sure to check out May Dreams Gardens where Carol is hosting her monthly celebration of Garden Bloggers' Bloom Day.  You're all welcome to join in!
Posted by Rose at 8:12 AM