I don't know about you, but it seems that everything I do takes longer to accomplish these days. I've taken a mini-blogging break lately so that I could focus on getting some Christmas projects and the shopping done.  But it's time for another Garden Bloggers' Bloom Day, and I didn't want to miss out, even though there's not much to show. 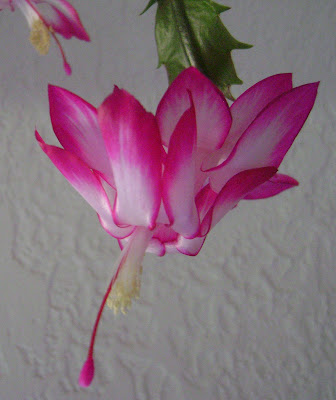 There are a few spots of green out in the garden from the lamium, heucheras, and hellebores, but otherwise the garden is a soggy mess of brown.  Besides, it's rainy and windy outside today, so we will have to stay indoors. I had hoped I could share some blooms on the small Christmas cactus for Bloom Day, but it turns out it is more of a Thanksgiving cactus instead.  After a nice little showing for Thanksgiving, its blooms have withered, and it's time to move it and make room for more Christmas decorations. 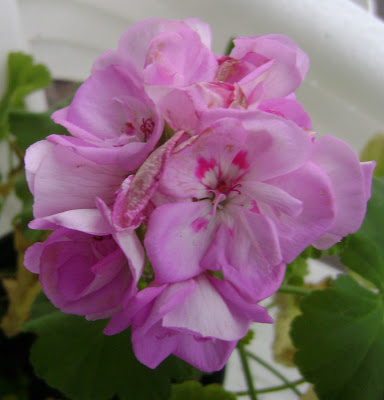 A pot of pansies and ruffled kale are still blooming outside my patio door, but I showed them last month.  Other than that, the only real bloom I have today is a geranium resting in the garage.  Considering my shameful neglect of all the plants I brought inside last month, I'm surprised it's even still alive.  And that's it, fellow garden bloggers.  Not even a festive Christmas poinsettia to share with you . . . I really need to get that shopping done!

Speaking of geraniums,  I also wanted to participate in a meme hosted by Beth at Plant Postings about lessons learned in the garden this autumn.  In September I wrote about what I had learned this summer, but there is always something new to learn in the garden--or maybe it's just that I need to have the lessons presented several times before I actually learn them:)  If you will indulge me, here are a few things I learned (or re-learned) this fall:

1.  Don't bother bringing in annuals or tender perennials to over-winter inside unless you're actually going to take care of them.  Determined to be a little thriftier next season, I potted several cuttings of coleus and dug up some of the geraniums, begonias, and hibiscus that were still looking good in early November. I  brought numerous pots into the garage while I tried to decide where there might be room in the house for them to spend the winter.  A month later, they're still in the garage.  The garage is semi-heated, so that shouldn't be a problem, but opening the back door repeatedly to let the dogs out and leaving it wide open on a very cold day for the furnace repairman meant some arctic blasts hit some of the tender plants. Instead of saving them for next spring, I may have merely consigned them to a slow death.


2. If someone else is doing the mowing and trimming, make sure you give clear directions as to what should not be mowed down. Mr. P and I have had repeated discussions on this subject, and for the most part, he tries his best to follow my wishes.  But I was surprised upon returning from some errands in early December to see him mowing the lawn.  Now that was fine because the lawn needed a last trim before winter, and the remaining leaves were shredded instead of matting the grass all winter.  It was also fine that he mowed over the vegetable garden, except that I had wanted to leave the kale standing.  It wouldn't have lasted all winter, but it would have lasted awhile longer and would have looked so pretty with the first dusting of snow.


I also like to leave the fennel standing, but it, too, was leveled.  No frozen fennel to photograph this winter! 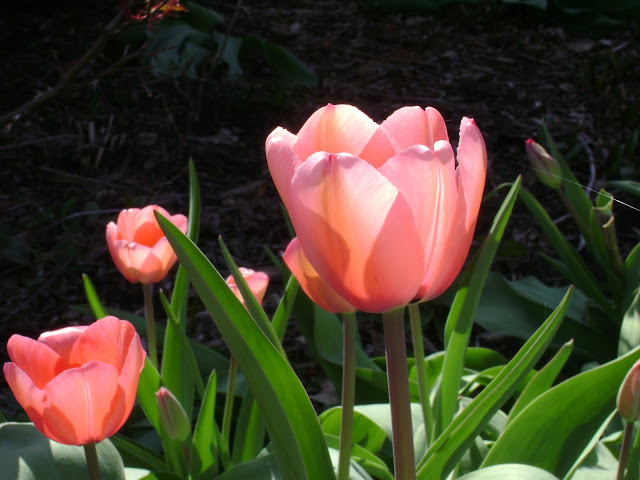 3.  Planting spring bulbs isn't always as easy as it sounds.  I love, love tulips, and the time spent planting them in the fall is well worth it.  But I discovered this year that the amount of work it takes to have this beautiful show in the spring depends on where you plant them.   Planting them in the compost-rich soil of the new arbor bed was a breeze and actually enjoyable, especially since I didn't have to worry about disturbing other bulbs. But I decided this year that a mass of tulips and daffodils in front of the large fir tree next to the shade garden would really provide some impact next spring.  What I didn't realize is that the soil in front of the tree was rock-hard and mostly clay.  Add gnarled tree roots every few inches, and you have the makings of a very difficult job.  Several hours of pounding a shovel and then a trowel into this stubborn soil gave me quite a workout. 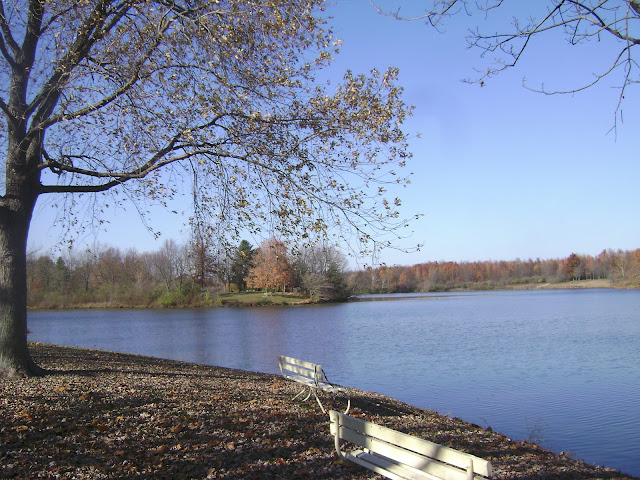 4. Take time to enjoy the season.  We really had a lovely fall, and although I did enjoy the fall color around me as I was working or while I was driving here and there, I wish I had stopped more often to really enjoy it.  For a month, I had promised Sophie we would go for a walk at our local forest preserve, but I kept putting it off until it was too late.  Sometimes, you just have to put down the trowel and make time for simply taking in all the beauty that is around you.
If you would like to share some lessons you've learned in the garden this past season, there's still time to join in at Plant Postings.  And don't forget to check out what's blooming all across the world at Carol's at May Dreams Gardens.
Posted by Rose at 11:40 AM