Did you participate in the Great Backyard Bird Count this past weekend?  After participating in my first bird count last year, I was eager to join in again this year, especially since I had two little visitors who would be more than willing to help to count all the different birds they could see. 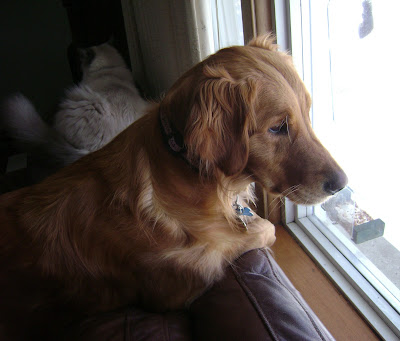 No, no, I didn't mean these two helpers, although Sophie enjoys watching bird antics as much as anyone, as does Toby--when it's not interfering with his nap time, that is.  No, the visitors I was referring to are two of my grandchildren who spent the past week with us while their parents were off on a much-needed vacation.  Granddaughter, who is 7 1/2, is not only my garden helper, but also a lover of anything in nature.  She is not merely satisfied to name the birds with my help,  she must consult my Birds of Illinois field guide and then go to the computer to look up the species for even more information before confirming its identity.  (The Cornell University website, which is included on the GBBC links, is a great source for identifying birds, by the way, if you've never checked it out.) 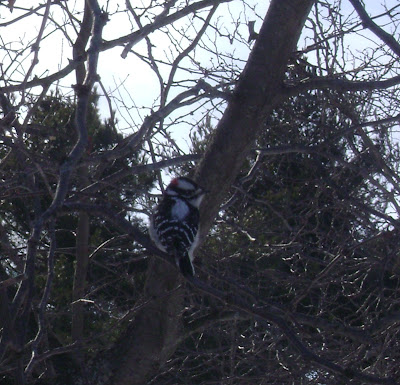 But there was no need for either the field guide or the internet to identify the few birds we saw this past weekend. Just the week before, we had so many different birds visiting our yard. I was so happy to see the downy woodpecker finally come for a visit, after being absent all winter long. 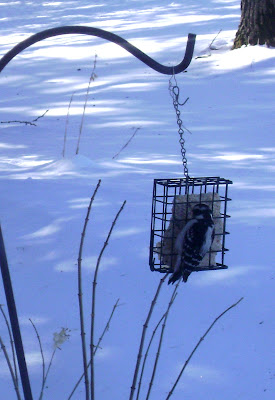 There were even a pair of them, as the female lacks the distinctive red mark seen on the nape of the male.  (Please excuse the poor photos--all were taken through a dirty living room window with only the small zoom of my point-and-shoot camera--and I forgot to use the snow setting to avoid all the shadows here.) 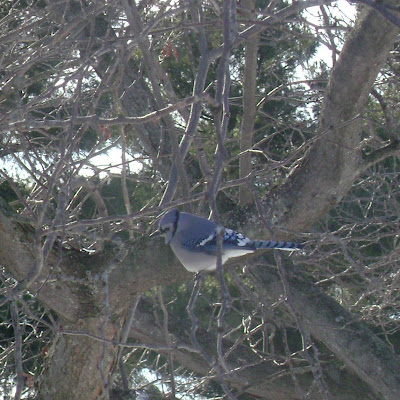 Bluejays and cardinals were easy to spot in the trees and as they visited the feeders, though too quick for anything but this one photo. 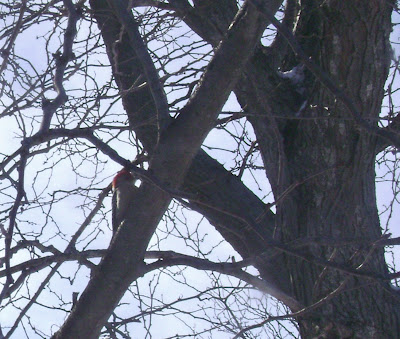 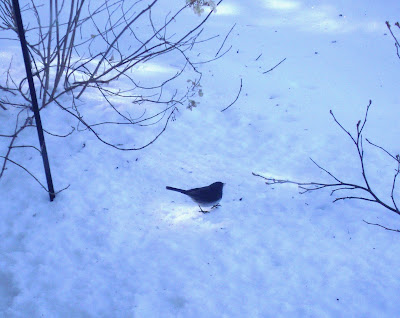 The week of February 7--12 was bitterly cold, and there was still a heavy snow cover.  But last week's warm spell, which reached into the upper 50's at times and melted all but a few piles of snow, may have prompted the birds to change their patterns.  Even the dark-eyed juncos, which have been around all winter long, were nowhere to be found during Bird Count weekend.  I don't know; maybe they all decided to go skiing in Wisconsin for the weekend. 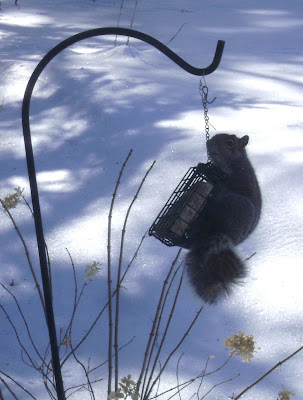 I don't think I can count this critter in the Bird Count either, do you?:)  By the way, squirrels must be more intelligent than I ever gave them credit for.  This guy was totally impervious to the incessant barking and pawing of Sophie, who I thought was going to crash through the window to get at him!  He looked Sophie square in the eye and kept on chewing on the suet block as if to say, "Ha, ha, ha! You can't get me!"
All in all, our bird count this past weekend was very disappointing.  Despite making sure all the feeders were full, Granddaughter and I spied only a few species.  Our final tally:
15 House sparrows
30 European starlings
5 Crows
1 Hawk--which I believe was a red-tailed hawk, but it flew away so quickly I couldn't be sure.
A winter storm is moving in tonight with a forecast for another 5-7 inches of snow, so I imagine more of the birds will return in the next few days for a tasty meal.  But it's too bad they weren't here for the Great Backyard Bird Count, which ended on Monday.  I hope that you had better luck this past weekend than I did in seeing birds; although the count has ended, you do have until March 1 to report your findings.
Posted by Rose at 9:46 AM