After my last post, I thought I should focus on some positives in the garden, especially since I've probably been sounding like a total slacker lately.  We have had unbelievable weather this past week--sunny skies with temperatures in the 70's!  I managed to accomplish a lot in the garden this week thanks to the mini-Indian Summer, and I'm feeling pretty darned good right now.  In fact, I completed the top three tasks on my fall to-do list, just in time (well, maybe a day late) for "Three for Thursday,"  the brainchild of Cindy at My Corner of Katy. 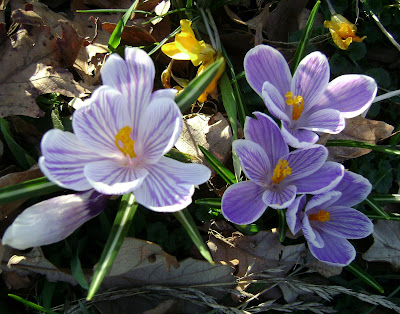 1. I finally have all my bulbs planted!  I hadn't planned on adding too many spring bulbs this fall, but you know how it is when you start leafing through the fall catalogs and seeing all those tempting photos.  I wound up planting nearly 300 bulbs, including a bargain box of 120 crocus bulbs from Home Depot.  Actually, all of the bulbs except the crocus were planted two weeks ago, but for some reason those crocuses took forever--I think they were multiplying in the box::)  But with the help of my two oldest grandchildren, I finally got them all in the ground yesterday.  I know that when spring arrives and I see all these blooms, I am going to be so glad I got carried away this fall. 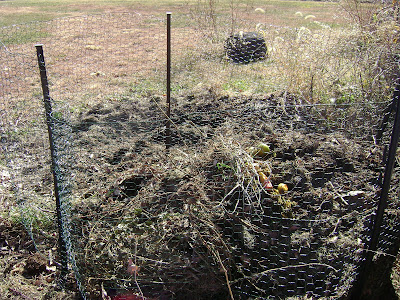 2.Another project I had been intending to complete all summer was building a compost bin.  As you can see, it's not the fancy wooden two or three-compartment bin I would really like to have, but a few inexpensive fence posts and some vinyl-coated chicken wire.  But it's certainly better than the sloppy pile I had, and at least it will keep materials contained, helping them to decompose faster. 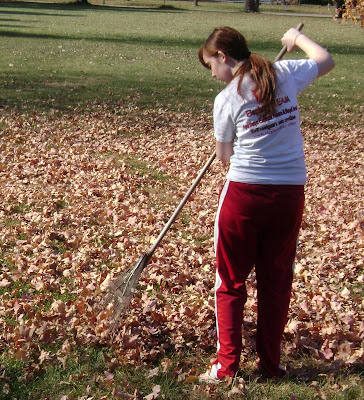 By the end of yesterday, the new compost bin was filled to the brim, thanks to the two oldest grandchildren, who had the day off from school and raked leaves while I did a little garden clean-up. 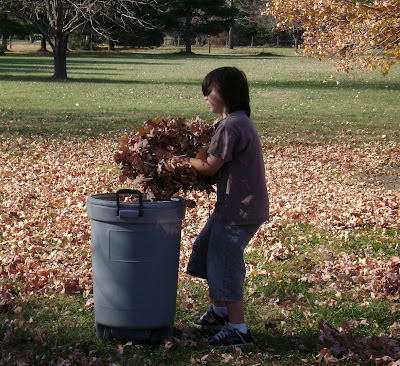 Grandson has been saving up for a new Playstation III, and Grandma was more than willing to contribute a little to the fund after all their much-appreciated hard work.


3. The third task I finished this week is the one I'm the most excited about.  I have been planning for some time to add more garden area to the circle area of lawn behind our house where the vegetable garden, the butterfly garden (also known as the Garden of Chaos), and the new lily bed are located.  This week I finally prepared a large area for planting next spring, using the lasagna method rather than the backbreaking task of digging up all the grass and soil.

A few commenters on my last post asked what lasagna gardening is.  For those not familiar with this term, it's simply a method of smothering the grass, using layers of newspaper, leaves, compost or fresh garden soil.  Over the winter these should all decompose, leaving me with a nice bed of workable soil--grass and weed-free, I hope--to begin planting.

The project got a late start because I first had to negotiate with Mr. Procrastinator who informed me he thought I already had "enough flowers."  Enough flowers??  I didn't even know there was such a thing . . . but that's the subject of another post one of these days. His real concern, I'm sure, was having one more flowerbed to mow around.  After some threats gentle persuasion, he came around to my point of view, and I began preparing the new bed by laying out an old hose and marking the new boundaries with spray paint.

Getting a late start on this did present some problems.  My creaky knees rebel at working on my hands and knees for too long, so that I could work on this project for only an hour or two each day.  But even more problematic were the wind and the lack of enough new soil to weight down the newspapers.  Most of our garden centers and the big box stores apparently think no one gardens in November, and bags of garden soil are a scarce commodity right now.  I bought the last few bags of soil at one center, which barely covered a third of the new bed.  Lugging them out of the car wasn't much fun either, so I finally broke down and decided to have a load of compost delivered.

And then there was the wind!  Perhaps this isn't a problem in a tree-lined suburb with houses all around to block the wind, but I live in an open area, where the wind whips across the soil, sweeping anything in its path--including newspapers--hundreds of yards away.  Thirty-mile-per-hour winds a few days last week kept me from working in this area at all.  Once the wind subsided to a more reasonable 10 mph, I began laying out the newspapers, weighting each one down with rocks before I moved on to the next paper. After I had a small section completed, I spread out the bags of garden soil, but it wasn't long before I ran out, and I began frantically looking around for anything heavy that would keep those light newspapers in place.  Small rocks dug up from other garden areas were poured into pots, and a few milk jugs were filled with water to also act as temporary paperweights.  Logs, a strip of metal, even my wheelbarrow were put into use. 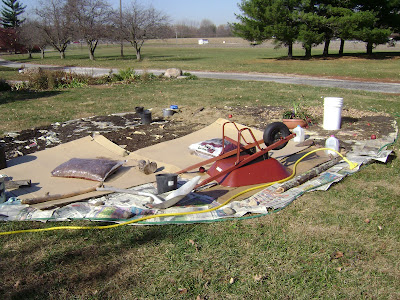 This is the scene yesterday--I can only imagine what visitors must have thought, all of whom were too polite to ask what in the world I was doing:)

A real timesaver came my way from someone else's carelessness.  There are some people who think country roads are the perfect place to dump their trash.  We live close enough to town that it's usually not that big of a problem for us other than the assortment of beer cans and fast food bags that are frequently deposited in the shallow ditch next to the road.  But this past weekend, I noticed large pieces of cardboard and styrofoam in the ditch.  Now I would hope someone didn't purposely dump these pieces, but rather had them blown off their truck by the wind.  Still, you would think a driver would notice and have the common courtesy to pick up after himself, especially when the pieces were strewn down the ditch for almost a mile.

As I fumed about this situation, I had a brainstorm.  The cardboard would be perfect in place of some of the newspapers.  I drove down to the spot where the cardboard lay, and after wrestling with it for awhile, finally got one piece in my car.  There was no room for the other large piece, so I decided to walk the 1/4 mile back to the house, fighting off the wind that threatened to take both of us across the fields.  These pieces were actually the top and bottom of a box containing a queen-sized headboard, so they covered a lot of area and saved me at least an hour on my knees laying down more newspapers.  I think you would say this turned out to be a case of making lemonade out of "lemons"!

This morning the load of compost was delivered, and thanks to Mr. P. who made short work of spreading out the mountain of dirt with the tractor, this new bed will now be left to settle over the winter.  Once spring comes, this bed should be all ready to plant.

There is still some tidying up to do in the garden, and I've been going to bed most nights with sore muscles,  but all in all, I'm feeling pretty satisfied about the garden right now.  The wind can blow, the snow can fall--I'll be happily dreaming of spring!
Posted by Rose at 12:45 PM