September Bloom Day: The End of the Summer Garden

It's time for another Garden Blogger's Bloom Day, the brainchild of Carol at May Dreams Gardens.  This is a great way to record what is blooming each month, especially for those of us who are rather lax about keeping a garden journal. 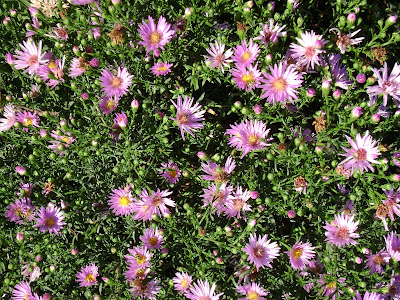 September is definitely a slow time in my garden, as I realize I haven't planned enough for fall color.  Add to that the heat and drought-like conditions we've had the past two and a half months, making for a less than pretty picture.  Still as I walked around on Sunday, I did find some new blooms for this month, including the mounding  NOID aster above  in the front garden. 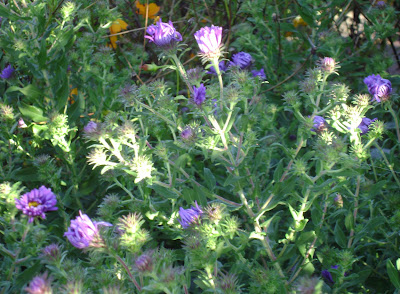 Much showier, yet hard to photograph is the native aster in the butterfly garden. When it looked stressed earlier this summer,  I cut it back hard, and it seems to have appreciated the drastic haircut. 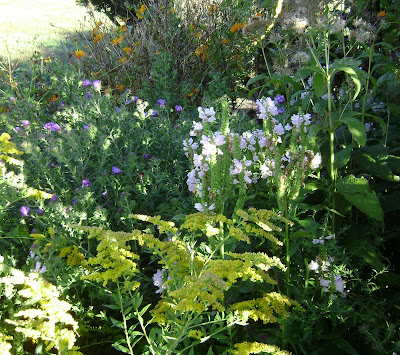 The butterfly garden is definitely a place where only the strong will survive, and the aster seems to be holding its own among the native goldenrod and obedient plants. 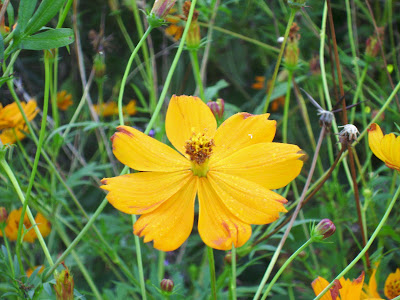 Speaking of a strong survivor, I know I've shown these 'Cosmic Orange' cosmos countless times before, but you've got to love a plant that keeps on going on summer long.  Have I mentioned these are 4 to 6 feet tall? And no worries about staking--these have been buffeted by strong winds and still stand tall. 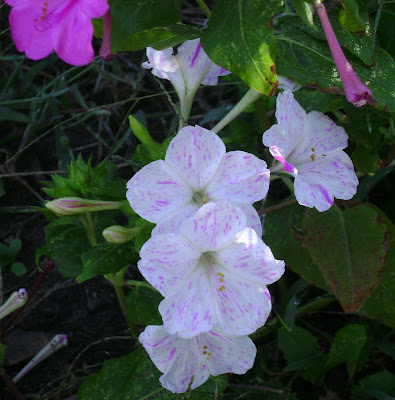 One of the few annuals that survived the drought in the butterfly garden this year are these four o'clocks.  'Broken Colors,' seeds from Renee's Garden, were directly sown in the soil. 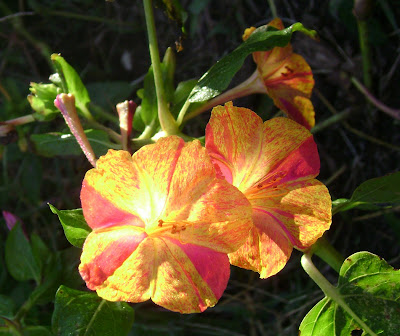 As you can see, the blooms come in a variety of hues, from pastel to hot colors. I'm going to try to collect some seeds from these, but I won't mind one bit if they reseed themselves as well. 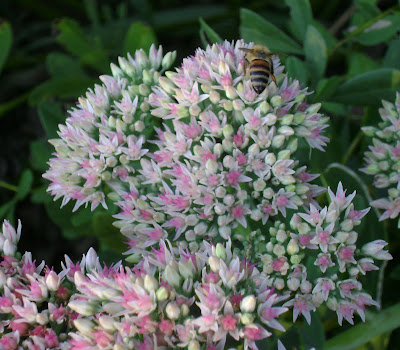 One of my favorite plants in the fall is sedum, a favorite, too, of the butterflies and bees.  We all like to show our gardens in the best possible light, and this close-up does show off the pretty pink and white early florets of 'Autumn Joy.' 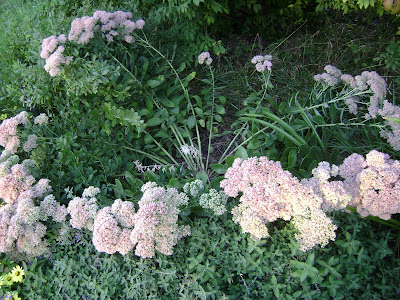 But for once, I'm going to show you the whole not-so-pretty picture.  This sedum in the roadside garden looks as though an animal decided to take a nap right in the middle of it, but I suspect the plant simply flopped over.  As unattractive as this is, at least the plant looks healthy, which is more than I can say for the same sedum in gardens nearer the house.  All of those look as though they're ready to die, and I've yet to figure out why. 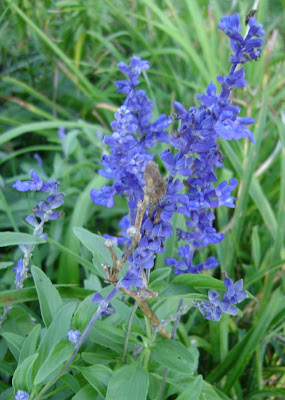 At the other end of the roadside garden, the area is dominated by the dried seedheads of coneflowers.  Thank goodness for the 'Victoria Blue' salvia which add some much-needed color to an otherwise brown and green landscape. 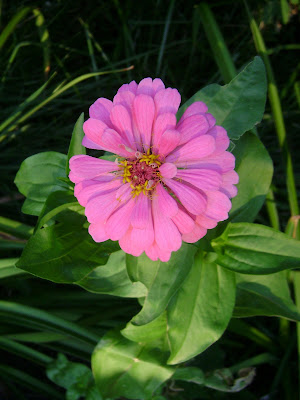 Also in the roadside garden is my one and only zinnia that germinated this year.  It's pretty lonely, so I hope next year's weather is not so extreme, and I can have the usual crowd of zinnias once again. 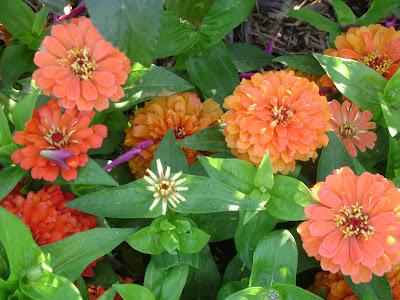 I do have some smaller zinnias in the lilybed, but these were bargain seedlings purchased at a garden center, so they don't count to me.  I like the tall ones that come in a range of colors and usually bloom in August, just when other blooms are beginning to wane. 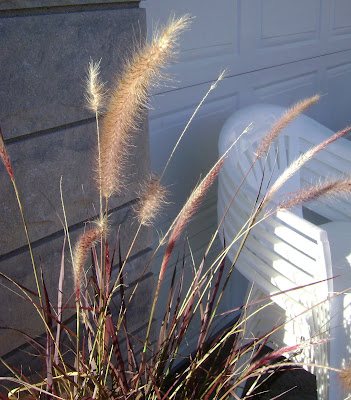 My containers are looking pretty ratty, too.  The petunias and callibrachoas have pretty much bit the dust, the result of  less-than-diligent watering, no doubt.  In some cases, a tough plant has taken over to compensate in the pot, like this annual purple fountain grass.  Photographing grasses is a tricky task that I haven't mastered yet, so I hope these few plumes give you an idea of the beauty of this grass that even looks good covered in snow. 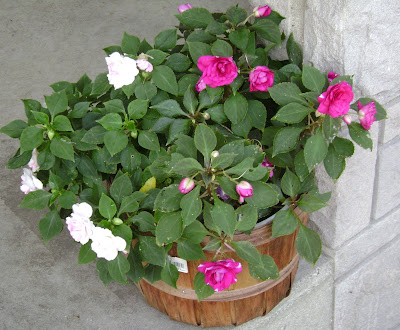 The basket of double impatiens is still looking good, however, probably because it has escaped the wrath of the sun all summer in a shady spot on the front porch. 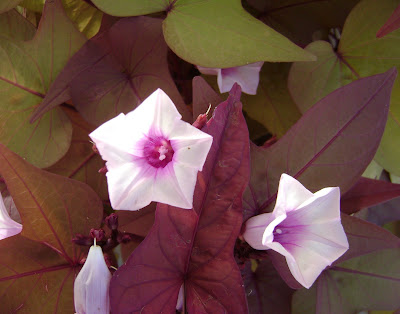 And while the lovely 'Creme Brulee' petunias in this pot finally withered and gave up last week, this Ipomoea 'Sweet Georgia' has taken over and produced some blooms. Joy showed some blooms on one of her sweet potato vines one day, but this is the first time I've ever had blooms on any of mine. 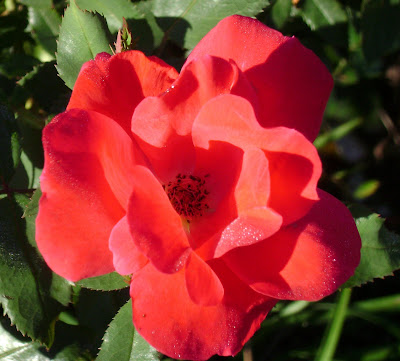 That's it for new blooms in my garden, but a few re-bloomers are worth noting.  Now that the Japanese beetle onslaught has come to an end, the Knockout roses are blooming their heads off.  I can't say enough about these roses--they bloom from early spring until frost and are perfect for lazy gardeners  gardeners like me who don't want to fuss with hybrid teas. 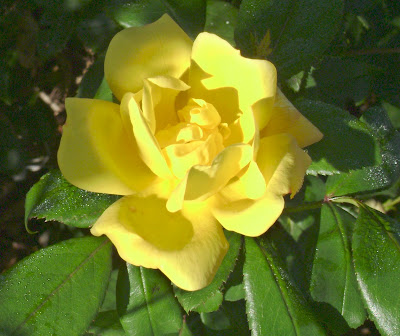 The new 'Radsunny' Knockouts in the lilybed are also resurging.  I love yellow roses, although these, I've discovered, turn white as they fade. 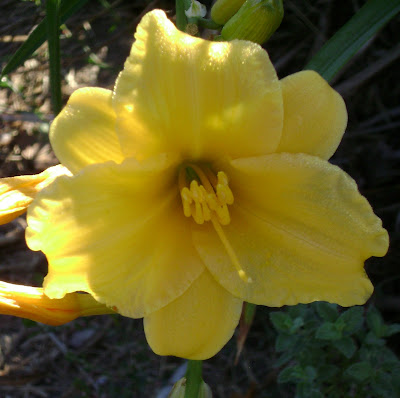 The much-maligned Stella d'Oro daylilies are also putting out a few new blooms even though I forgot to fertilize them as I recommended earlier this summer. 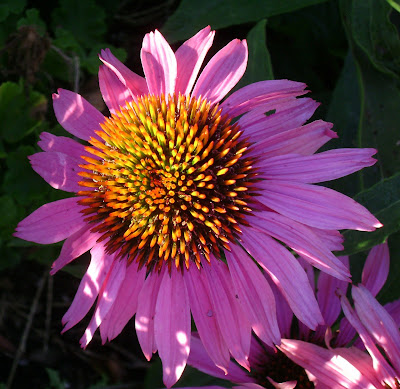 And even though coneflower season is over, a few late volunteer seedlings have put out a few blooms. 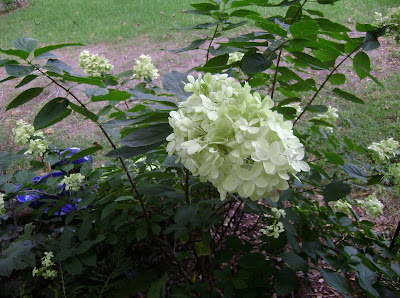 And finally I can't end this GBBD post without including one more photo of my favorite end-of-summer blooms--the 'Limelight' hydrangea. 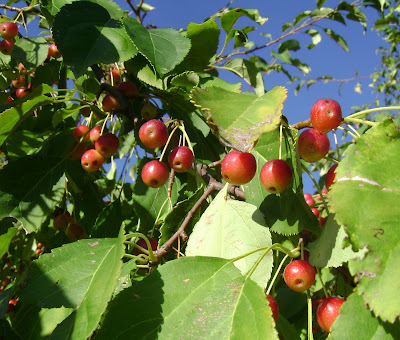 It's been a challenging summer for gardeners, and I, for one, am glad to have the cooler temperatures and see signs of fall on its way. Although the garden is coming to an end, the abundant crabapples on this white flowering crab tell me that by next GBBD at least there will be lots of berries and colorful leaves to share.

I'm spending a few days with some special visitors here this week, so I probably won't have time to get around and visit everyone until later this week.  But I will catch up on reading all your posts then!  In the meantime, be sure to visit our hostess Carol and see what is blooming all over the rest of the world.
Posted by Rose at 5:00 AM