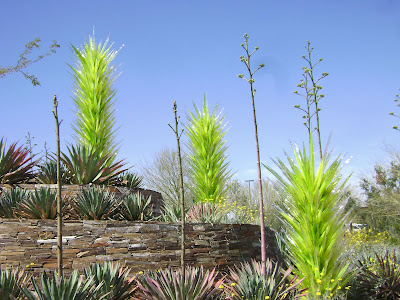 The Desert Botanical Garden has become a favorite stop every time I visit my daughter in the Phoenix area. Last year I was fortunate to visit it twice while it hosted an exhibit of Chihuly artwork, which you can see here and here. It's no wonder then that I had a momentary feeling of deja vu as I entered the Garden and saw the familiar sparkling yellow-green towers of glass still marking the entrance. However, a sign nearby explained that the Garden is sponsoring a fundraiser in hopes of raising enough money to keep this Chihuly work as a permanent fixture at the DBG. I can't blame them for wanting to keep such a dramatic piece; it's a dazzling eye-catcher as one enters the garden. 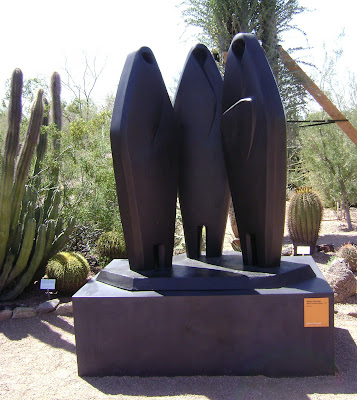 This year the work of another artist was featured in various parts of the garden. Large sculptures by Native American sculptor Allan Houser included many abstract pieces such as this one, "When Friends Meet." 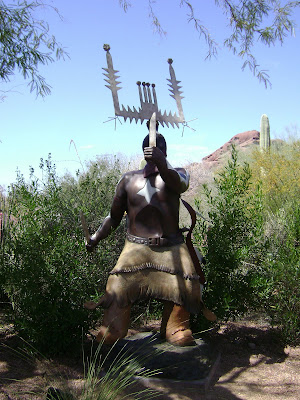 Other pieces were more traditional such as this one, "Spirit of the Mountains." While it's hard to top Chihuly in the garden, in my humble opinion, having another noteworthy exhibit of art
added something new once again to my visit here. 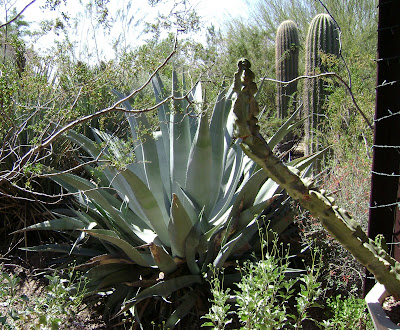 Having visited the garden several times now, I feel pretty comfortable in identifying many of the plants, at least by genus name, if not the specific variety. Agaves are one of my favorites, although I still confuse some varieties with aloes. 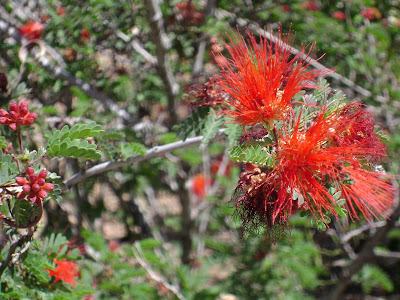 A favorite bloomer is the Baja Fairy Duster. 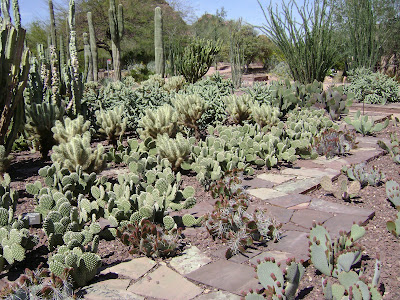 The iconic saguaros, the prickly pears, and other cacti and succulents are the main feature of the garden and have become familiar sights. 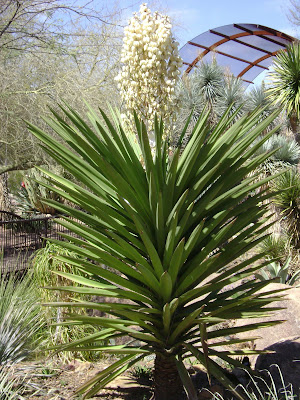 As are the yuccas, which look their best in full bloom. 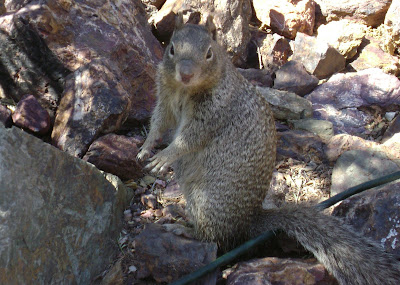 And another familiar sight . . . Mr. Squirrel is every bit as at home
in a desert setting as he is in my front yard. 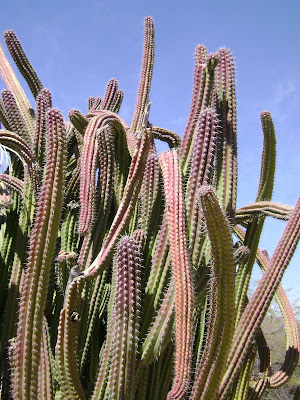 But there is always something new to be learned here and something not noticed on previous trips. Although I've seen the Organ Pipe Cactus before, the red hues on this Stenocereus thurberi were something I'd never seen before. 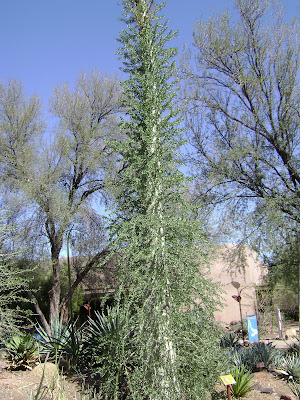 On one of last year's posts about the DBG, I included a photo of this tree, but couldn't identify it. This year I found the tag for this unusual plant--it's a Boojum Tree, a member of the Ocotilla family. 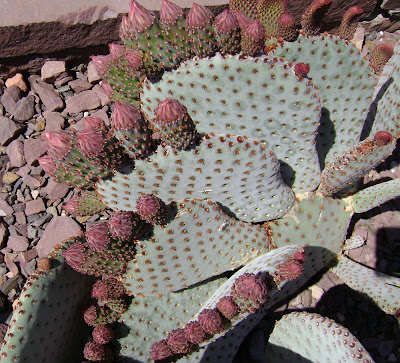 It was a little early yet for the blooms on the cacti, as seen on this prickly pear
with buds not quite ready to open. 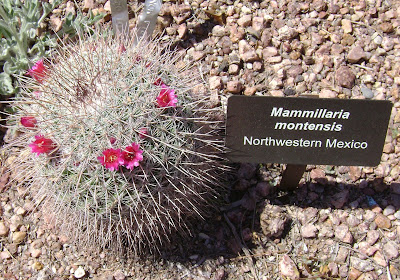 But some of the mammilaria were already bursting with some spring color. 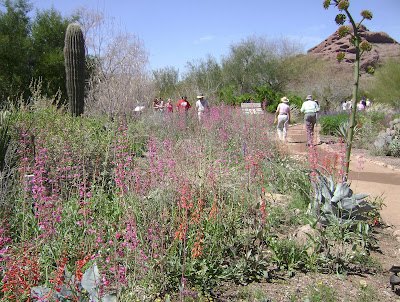 However, it was perfect timing for the wildflower garden,
the first time I had seen it in full bloom. 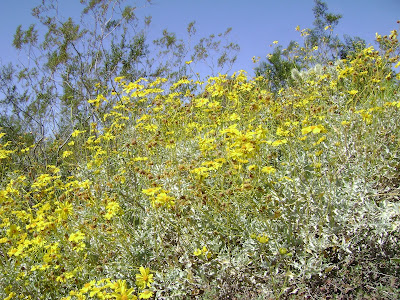 Mounds of desert marigolds appeared at every turn. 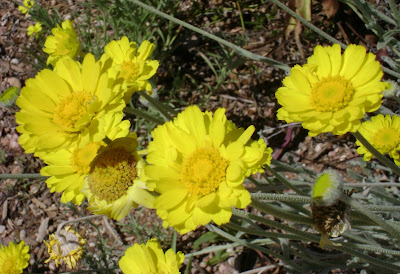 They obviously thrive in the hot desert sun. 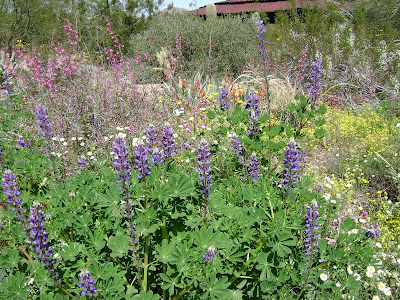 One of my favorite color combinations, pink and purple, showed up in these Arroyo Lupines Lupinus succulentus and Parry's Penstemons Penstemon parryi. 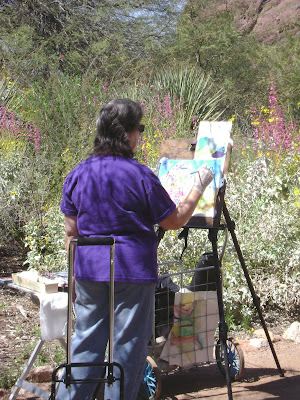 I wasn't the only one enjoying the colors of the wildflowers on this early spring day. 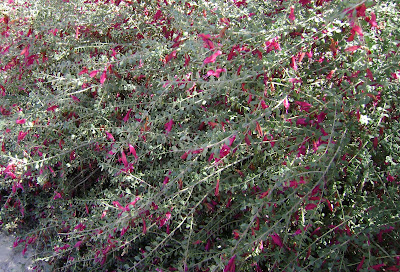 One of the things I like about the DBG, and I suppose it's true of most Botanic Gardens, is that all the plants are clearly labeled. However, labels aren't placed beside each individual specimen. I never did find a label for this shrub, but it reminds me of Noelle's Valentine shrub--am I right, Noelle? 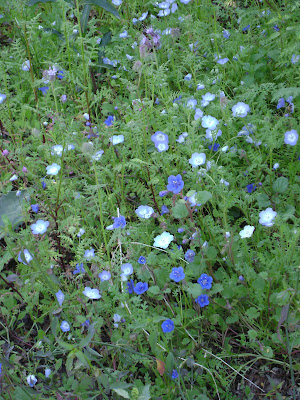 Nor could I find the label for these pretty blue wildflowers. 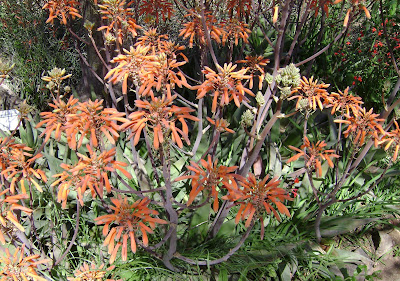 Outside the wildflower garden, these striking orange flowers appeared
in many plantings next to succulents and cacti. 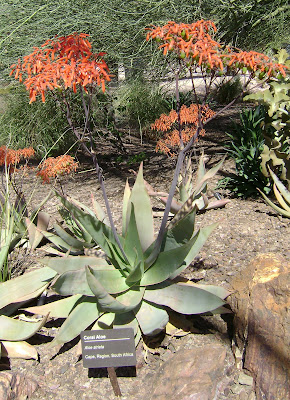 After much hunting, I finally found the label--Coral aloe, Aloe striata. Isn't this an interesting plant? I've never seen such colorful and dramatic blooms on a succulent before. 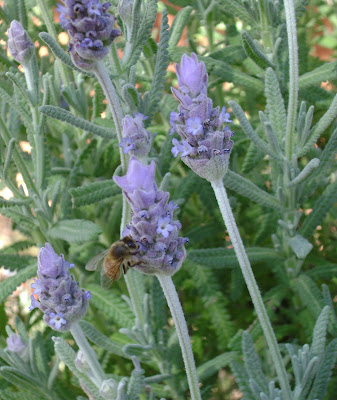 The garden was crowded on this Thursday afternoon with many visitors on spring break. But resident bees seemed unfazed by all the hubbub. This picture made me laugh because I had spent some time the day before shooting photo after photo of bees swarming around a flowering plum tree near my daughter's home, only to discover later I had nothing but blurs of motion in every photo. I took this close-up of a pretty potted French lavender, not even realizing until I downloaded it that there was a bee on the plant. A good example of photographic serendipity:) 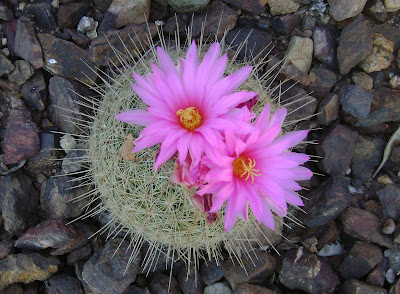 If you are ever in the Phoenix area I highly recommend stopping by the Desert Botanic Garden for a visit. This is one public garden that has something interesting to see all year long. Just a word of advice, however: if you visit here between mid-March and early November, I suggest going in the morning and taking along sunscreen. I had to respect the time schedules of my "chauffeurs," so I went at noon and then discovered too late that I had left my sunscreen in my other purse. In spite of a mild sunburn, though, the trip to the DBG was well worth it!
Posted by Rose at 9:06 AM