It is the 20th of the month, which means it's time for another veggie garden update, sponsored each month by Tina at In the Garden. I've been pretty good this year, participating for five months, but this will be my final vegetable post of the year. With frosty nights for the past week, it's time to put this garden to bed for the winter. 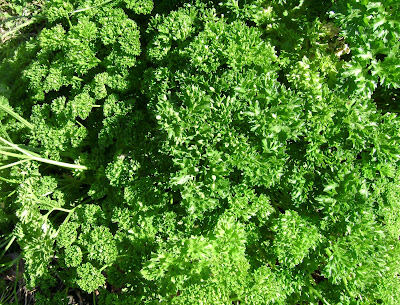 Everything that could be has been harvested, and only a few anemic leaves of swiss chard and this parsley are still growing in the garden. 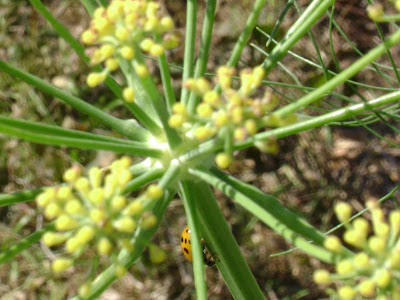 The fennel is going to seed, and instead of the swallowtail caterpillars which once covered these tall plants, they are covered with Asian Lady Beetles, which are everywhere.

It's a good time to evaluate the successes and failures of this year's veggie crop and to think about some changes for next year:

1. Without a doubt, the award for best performing vegetable this year has to go to the green beans. I planted perhaps 3/4 of a package of seeds, intending to sow a small second planting a few weeks later. But I ran out of room for the second planting, and it wasn't necessary anyway. We had a consistent harvest of green beans up until two weeks ago, and several packages were frozen for the winter.
Recommendation for next year: Remember to check the beans every few days. With this year's abundant rain, I underestimated how quickly they would grow, resulting in some harvests of gigantic beans, not so tasty or tender.

2. The spinach and lettuce did not perform as well for some reason; perhaps they were planted too late.
Recommendation: Plant spinach as early as possible and plan to freeze some. Plant the mesclun mix again only if room allows. Pull both as soon as hot weather arrives and use the space for something else.

3. The tomatoes produced a bumper crop in spite of the blight. 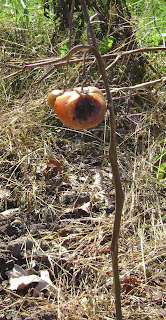 The best performer of the four varieties planted was Better Boy, which seemed to be more disease-resistant than the others. I managed to keep one heirloom alive--sort of--from the seeds started indoors. I waited all summer for this Cherokee Purple to produce a ripe tomato so I could finally taste what everyone has raved about. As you can see to the right, it never happened. This poor plant was hit first with the blight, dropping all its leaves and producing two tiny fruit, which turned red only as the temperature dropped below freezing.

Recommendation for next year: Depending on how my supply of frozen tomato juice and sauce holds out through the winter, I may plant fewer tomatoes. I planted 20 plants, which produced more than enough for us this year and kept me busy for awhile preserving all the extras. "Better Boys" and Romas will be the main varieties planted; as for heirlooms, we'll see if I feel adventurous enough to try again.

4. A gardening segment on the news today featured a local Extension agent explaining how important it was to clean up the garden. He emphasized the need for pulling out tomato plants especially, because of their proclivity toward diseases. Other plant material can be left in the garden, according to him. I took advantage of the sunny weather today to do just that, pulling up the tomato cages to store for the winter and pulling all the dead tomato plants out and depositing them in the burn pile--not the compost pile. And, of course, I will rotate their location next year to help avoid a chance of leaf blight again.

Recommendation for next year: Check tomato plants carefully and often as the summer progresses. At the first sign of spotted and brown leaves, spray with a fungicide. The fungicide may not have worked this year, but since the blight hit while I was away, I never got the chance to try it.

4. Mulching the garden this year really helped control the weeds. I used wood mulch this year, only because I had some extra, but whatever I use next year, the key, I think, is to put down the newspapers first.
Recommendation for next year: Mulch again, but sooner! 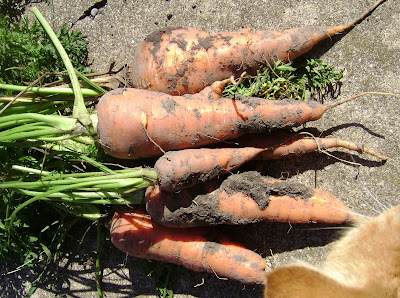 5. An unexpected bumper crop came from the carrots. I never bothered to thin them out and didn't get around to digging them up until two weeks ago, thinking they needed more time to fill out. To give you some perspective on this photo, the small carrot in the center is a normal-sized carrot you would get in a bag purchased in the supermarket. The rest of these are monsters! Even Tarzan in the corner of the picture was afraid to touch these scary giants.
Recommendation: Pull up onions and carrots much earlier!

6. Other results from this year: the few beets planted did very well; I had forgotten how much I liked these vegetables. The gourds, on the other hand, were planted much too late and didn't do much of anything.

Recommendations: Plant more beets. Plant gourds earlier in the season. Other veggies I'd like to add: sugar snap peas, summer squash, and some winter squash. I've wanted to plant asparagus for years--if spring comes early enough to work the garden in March or early April, I might finally get around to planting that asparagus and the peas. Of course, that will mean digging up more space as well! 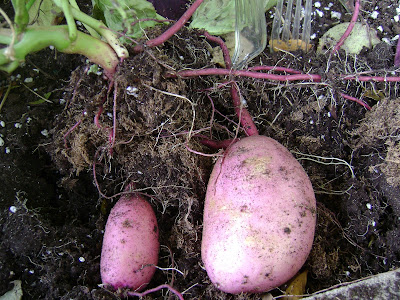 Overall, I was very satisfied with the veggie garden this year, and if that weren't enough, I found a couple extra vegetables elsewhere--when I pulled out the wilted sweet potato vines from my planter, I found these at the roots. So, tell me, are they edible??
Posted by Rose at 5:00 AM