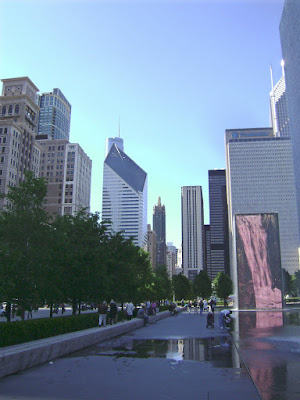 Hog Butcher for the World,
Tool Maker, Stacker of Wheat,
Player with Railroads and the Nation's Freight Handler;
Stormy, husky, brawling,
City of the Big Shoulders . . .

from "Chicago" by Carl Sandburg

To Sandburg it was the "City of the Big Shoulders," to Sinatra it was "my kind of town," to others it is "the Windy City," but to over 50 garden bloggers this past weekend Chicago was the beautiful and gracious city that hosted this year's Spring Fling. I'm still a little bleary-eyed and coming down from a sensory overload, but I wanted to share just a few highlights of this wonderful weekend.

Garden Muse Day is sponsored the first of each month by Carolyn Gail at Sweet Home and Garden Chicago, and this month it is particularly exciting as we actually got to see her garden in person! 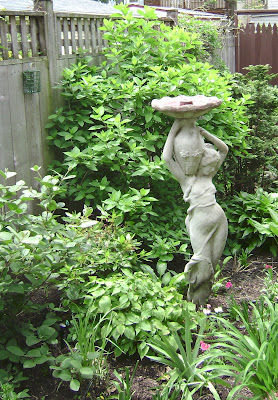 Carolyn Gail was gracious enough to invite all of the Spring Flingers into her garden and home. 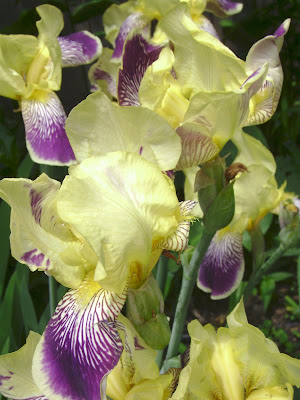 I had admired her orange perfection iris on her post, but all of her irises were beautiful, including these yellow and purple ones. 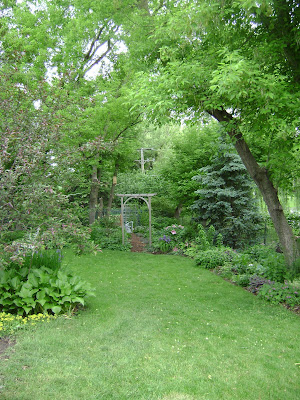 It is one thing to see a garden or parts of it on a blog, but quite another to see it in person. Some of you may think this photo looks familiar--Mr. McGregor's Daughter showed a similar photo on her blog one day as part of the "Through the Garden Gate" meme. A few of us who arrived early on Thursday were able to tour Squirrelhaven as well, and I was amazed at how large it was! A picture may be worth "a thousand words," but the real thing is worth ten times that. 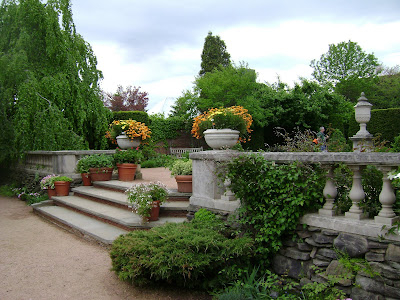 The weekend was jam-packed with so many activities that it may take me awhile to remember everything we did. But I won't forget the highlight of Friday's tours--a trip to the Chicago Botanic Garden. Beckie and I made the mistake of opting for a later arrival and barely had time to skim the surface of all this fantastic place has to offer. The English walled garden was one of my favorite parts . . . 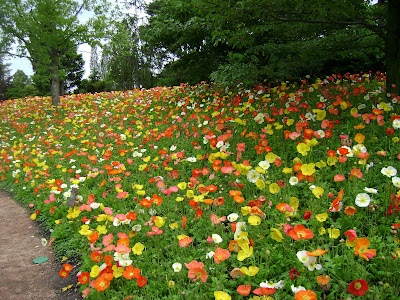 . . . as was this field of poppies. I have a feeling you're going to see a photo of this on every Spring Flinger's blog:) This planting of over 4700 poppies made an impression on everyone who saw it. 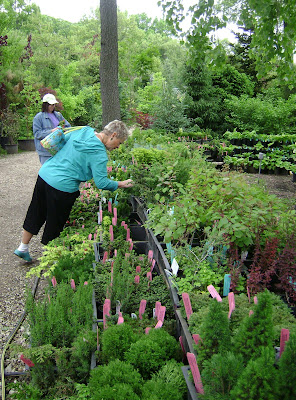 But the best part of the trip had to be meeting "old friends" and making new ones. There was certainly never a problem striking up a conversation with someone I'd never "met" before! Bus trips to gardens as well as dinners and lunches gave us a chance to meet new people and learn more about bloggers we thought we "knew." 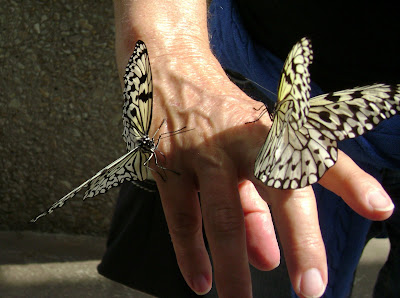 For example, who knew that Frances was such a butterfly magnet? 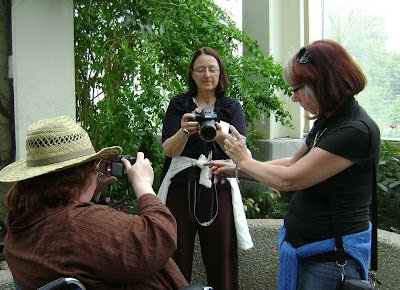 And, of course, a good blogger is never without his or her camera, ready to take advantage of every photo opportunity as Nancy, Gail, and Frances demonstrate here in the Butterfly Haven at the Peggy Notebaert Museum. 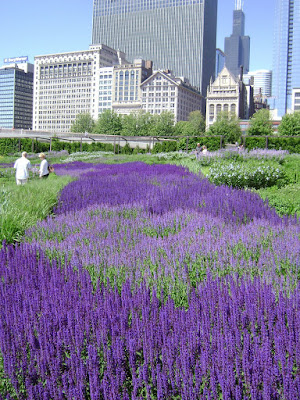 Another highlight of the trip was the Lurie Garden, part of Millenium Park. This wave of six different varieties of salvia was so impressive I must have taken 20 pictures of it and still couldn't capture its magical effect. 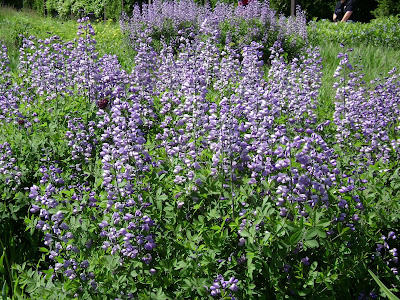 In the Lurie I also found another "must-have" plant--this baptisia. I know I've seen it on some of your blogs, but again it's not the same as seeing it in person. I'm smitten with it and now am trying to find a place for one in my garden. 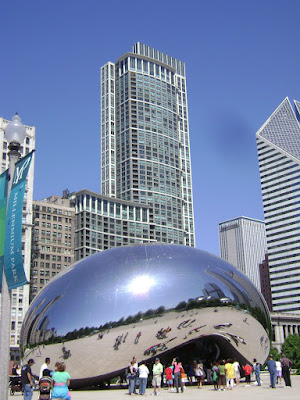 It was truly a wonderful weekend, and it will take me several days to sort through all my photos and collect my thoughts enough to thoroughly cover Spring Fling. But there are plants to be watered and some still needing a home in the garden and there are blog posts to be read, so this short post will have to do for now. A big thank you to all the organizers of Chicago's Spring Fling for a weekend I will always remember!
Posted by Rose at 5:00 AM