"Oh, the Weather Outside is Frightful..."

I hope that everyone had an enjoyable Christmas and time to relax from the often hectic pace of the season. We had both, although the weather was not very cooperative. In the past week we have run the gamut from frigid temperatures to a warm day in the 60's, from snow and ice to heavy thunderstorms with threats of tornadoes.

The forecast was for a white Christmas, and looking out across the lawn through my living room window last Tuesday, that seemed like a definite possibility. 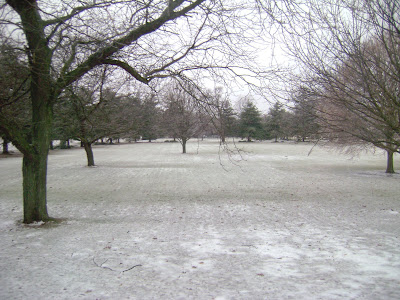 However, what you can't tell from the photo is that while there is a light dusting of snow, most of the white you see is actually a sheet of ice! The day before saw wind chills below zero, then the next day it warmed up enough so that the predicted snow turned to freezing rain instead. Roads were covered with ice, making for very treacherous driving. Many holiday travellers found themselves stranded as flights were cancelled at O'Hare and other Midwest airports.


Yesterday temperatures soared into the sixties, and the ice melted, leaving flooded roads and fields in its wake. Heavy thunderstorms added to the mess. We did make it to my parents' house for a Christmas brunch and a nice afternoon with my brother and his family, although the constant warnings from the weather radio in the next room created some unease. I have to admit I was happy to get home safe and sound last night--to a thankfully dry basement. 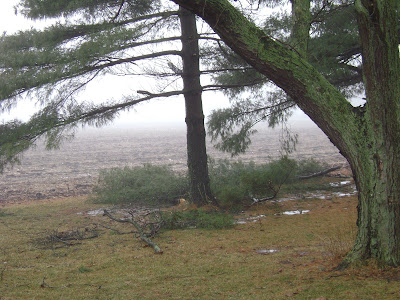 The fluctuating temperatures and high winds at times left their mark. Our yard is littered with broken pine branches that will require some time to clean up as soon as the weather cooperates.


It's a colder, but more normal winter day today, but there is a strange yellow glow in the sky I haven't seen for awhile--oh, it's the sun shining! While we Illinoisans have been complaining about the weather all week, at least it's a nice change of pace from our usual topic of complaint these days--state politics:)


Despite the bad weather, we were able to have our Christmas celebrations as planned. Although several local churches had to cancel their Christmas Eve services, my children were able to get here for our family get-together on Christmas Eve, and everyone managed to navigate our ice-covered driveway without falling. Earlier in the day I was worried my husband would miss out on the fun of watching the children open their presents because he has been on call at nights this week for highway snowplowing duties. Fortunately, the roads were clear enough that he was able to spend Christmas Eve and Day with us.

Christmas presents were eagerly ripped open on Christmas Eve, and the grandchildren had a grand time playing with all their new toys until it was time for them to go home and get a little sleep before Santa came to their own houses the next day. My husband and I spent Christmas Day at home alone, which actually turned out to be very nice and peaceful. My husband appreciated the time to catch up on much-needed rest after spending several days of working twelve-hour shifts, and with a John Wayne film marathon on one TV channel and a James Bond marathon on another, he was perfectly content! I took advantage of his mid-afternoon nap to set up the new Wii Fit I received for Christmas. That's a good thing, since the holidays have been filled with too many tempting goodies. 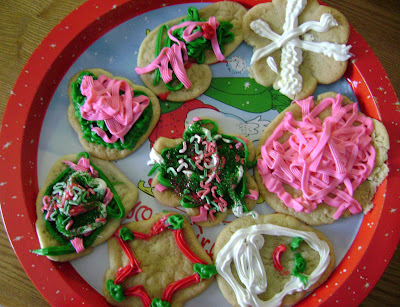 My five-year-old granddaughter came over a few days before Christmas to help me bake Christmas cookies. We made several dozen cookies, although we would have had more if she hadn't eaten so much leftover cookie dough :0) Her favorite part is decorating, as you can see. I set out cans of decorator icing and all kinds of sprinkles and let her go at it. 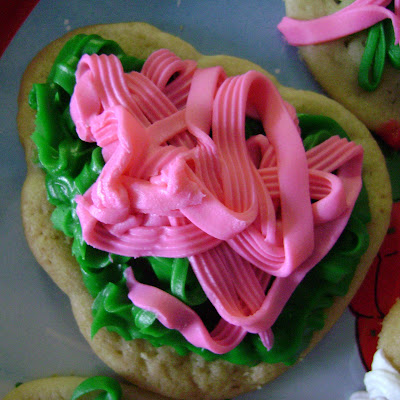 Anyone need a sugar fix??
Although the festivities are over, the decorations and Christmas tree will stay up through New Year's Day, as is my usual custom. I like to savor the holiday spirit as long as I can and enjoy the familiar ornaments as well as a few new ones, including this one received just a few days before Christmas. 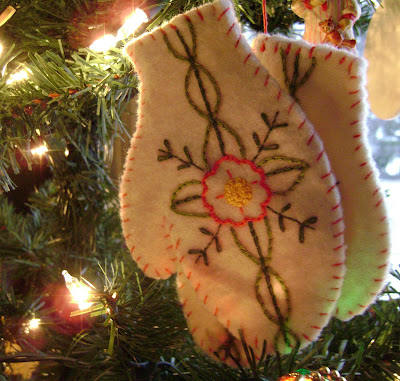 This lovely mitten ornament was made by Amy at Blossom, and I was the lucky winner of her giveaway! You might enlarge the photo to see the intricate embroidery and detail. Even though she is recovering from recent knee surgery, Amy managed to send these all the way from British Columbia just in time for Christmas. Thank you so much, Amy! I will treasure these mittens, and they will be hanging on my tree every year.
Again, I hope that you all had a very Merry Christmas, and I wish you a happy and prosperous New Year!
Posted by Rose at 3:00 PM