Brrr! It is darned cold here in central Illinois today--10 degrees F. at the present (-13 C), and I was told the wind chill was below 0 this morning. It's so cold that this Bloom Day post almost didn't get done. 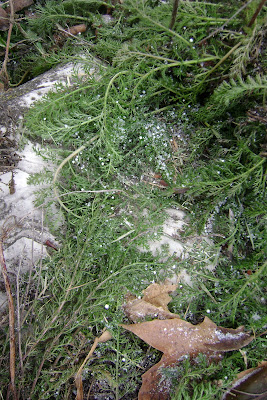 Braving the biting wind and frozen tundra this morning I looked in vain for a decent photo. I knew nothing would be blooming outside, but I had hoped for a nice covering of snow or even a coating of ice to create a pleasing picture, but no such luck. Even the yarrow, which has been the one plant blooming (sort of) from my first Bloom Day post in March to the last one in November was a huddled mass of frozen green. I am thankful, though, that we did not get the ice storm that was originally forecast for today. 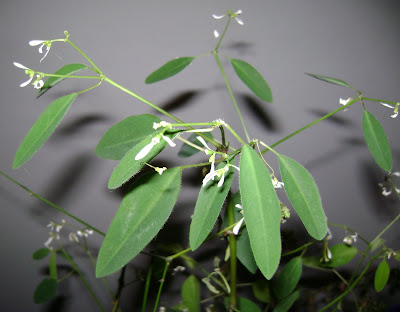 Quickly retreating from the cold into the garage, the Euphorbia "Diamond Frost" is still producing a few blooms, though it is fading fast. I did bring in a few pots of annuals this fall to see if I could over-winter them. Two weeks ago I had geraniums and impatiens blooming in the basement, but their blooms are all gone today. I hope they didn't suffer permanent damage from neglect the last two weeks. 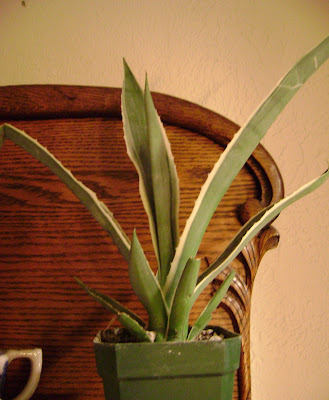 Not much is to be found blooming in my house either. I gave up growing houseplants several years ago after one after another succumbed to my neglectful care. I have decided, though, after visiting Arizona that cacti and succulents might be the perfect choices for someone like me. I purchased this Agave "Angustifolia" last week in Phoenix at a local nursery. Did you know there are hundreds of varieties of Agaves? I certainly didn't. I felt rather foolish asking the salesperson for an agave and being asked "which kind?" After getting a mini-lesson on some of the types, I settled on this one because it should grow rather large, and I bought another variety (name forgotten already) without any prickly spines for Daughter with the dogs. 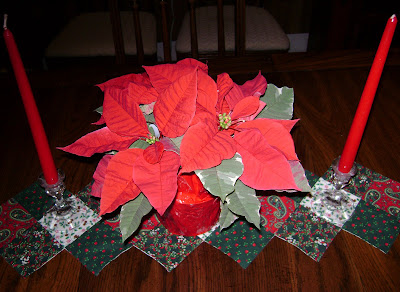 But here is the best bloom of all--just perfect for the season! I purchased this poinsettia from the high school's Art Club and was a little disappointed in its size, but oh well, the money goes to a good cause. Now if I could only get the rest of the house decorated soon and the Christmas cards signed and addressed and the rest of the Christmas shopping done . . .

Garden Bloggers' Bloom Day is brought to you this December, as it is every month on the 15th by Carol at May Dreams Gardens. Visit her and check out other posts--I know flowers are blooming somewhere!